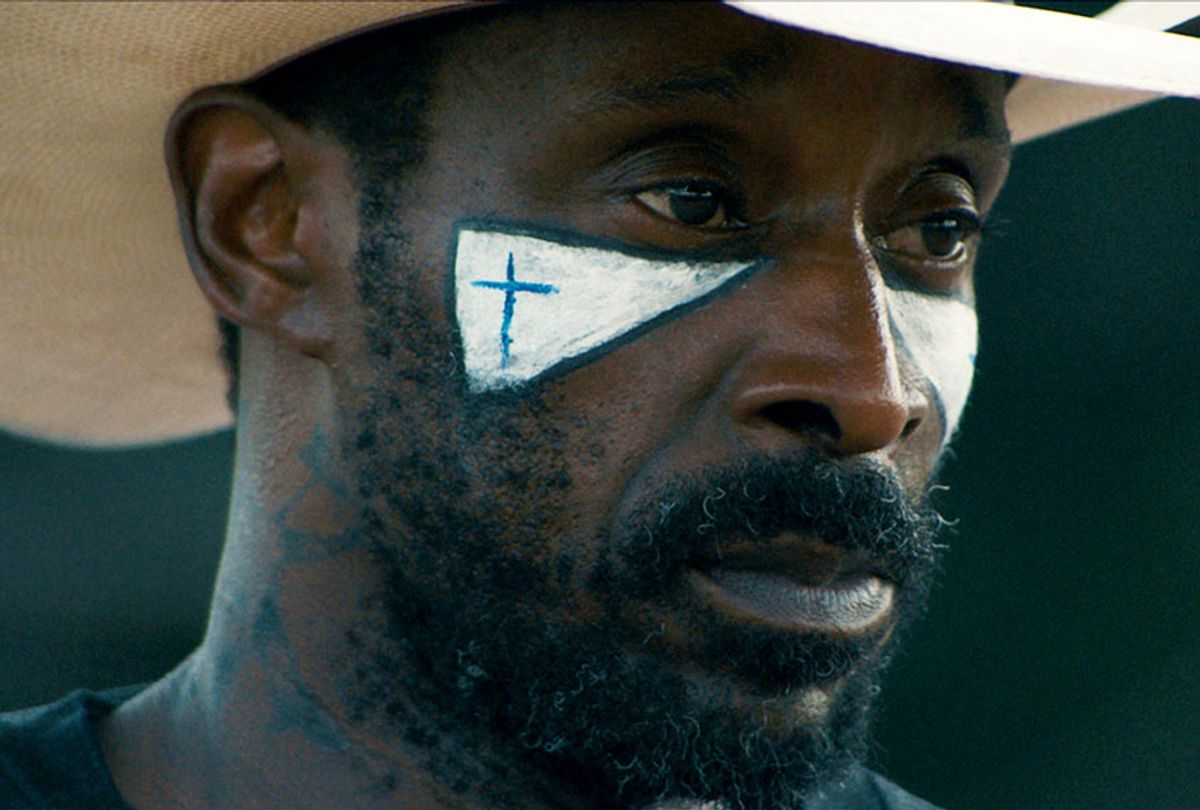 Rob Morgan excels at playing downtrodden characters. He delivered a breakthrough performance as the beleaguered Hap Jackson in "Mudbound" a few years back, and he gave a scene-stealing turn as the death-row inmate, Herbert Richardson, in the legal drama "Just Mercy," and recently appeared in the romance "The Photograph," both available now on demand.

As Abe Turner, a former bull rider in the affecting new drama, "Bull," Morgan artfully portrays a man struggling to live with dignity in a world that is crushing him. An early shot of Abe, sitting at a kitchen table with his leg outstretched, allows viewers to feel the pain of a body that has been ridden hard and put away wet. Abe is not much better emotionally, having regrets and being forced to make hard choices because of limited opportunities.

In "Bull," Abe is on the downswing of his career on the rodeo circuit. Where he once rode bulls, now he works as a bullfighter, distracting the 3,000-pound animals in the arena when other riders are bucked off. While he coaches would-be riders — practicing on a barrel – Abe probably does this more to recall the excitement of his glory days. Bruised and aging, Abe can't get medical clearance to perform as anything other than a rodeo clown. But, as Morgan says, "It is a testament for him to stay in the world and be good enough to save the riders."

Director Annie Silverstein's "Bull," which she co-wrote with Johnny McAllister, depicts Abe's life and his interactions with his 14-year-old neighbor Kris (an unselfconscious Amber Havard), who causes him some trouble, including breakihng into his house to have a party with her friends. When Abe decides not to press charges, Kris is forced to make reparations by helping Abe out at home. She soon follows him to the rodeo circuit and becomes interested in bull riding. As Kris starts to get a sense of direction in her hardscrabble life, Abe loses his.

Thankfully, "Bull" never becomes the cliched inspirational drama about the unlikely friendship between these two neighbors. Instead, it remains a probing character study of two lost, lonely souls. Morgan never goes for sentimental. His Abe is stubborn and selfish and self-destructive. He numbs his pain with pills, booze, and injections. And like the bull of the title, he tries to manage his anger.

The actor spoke with Salon about his new film, bull riding, and where he got his second chance.

How familiar were you with the world of bull riding before making "Bull"?

As far as bull riding, the world was very foreign to me. I have such an appreciation for it. I was aware the first cowboys and cowgirls were black Americans. Seeing all these beautiful black and brown people doing rodeos and tricks for people was eye-opening and made me proud. I might have been denied my history.

And what can you say about being in the arena? Did you do your own stunts?

I did the stunts up to the point where it could have sent me to the ER. So, we did this tag situation, where phenomenal bull riders come in. I had Houston's finest bull fighters show me the art of it, and they'd have a wheelbarrow with horns on it and chase me around the fields. When it came time to touch the bull, I did it until the bull was let out. But the body hitting the ground — that was me. In the scenes where I had to fight a bull, I would do it up to a point. It felt real. I was in the arena, and I was caught a couple times when the bull was let out.

"Bull" asks you to play a man who is beaten down by life, and whose body is beaten up. What I admire about your work is how you give dignity to such downtrodden characters. Can you talk about your approach to playing Abe?

I'm thankful people trust me with such sensitive material. I guess I need to show happier times in my life. [Laughs] I pull from my experience as a young black man in America. My grandfather was a big influence on me, but I lost him when I was a kid. My uncles navigate and persevere and pull through against systemic challenges. We find a way to contribute and be useful to society even when things are pitted against us. We find joy. Our circumstances mean we need to do more to get what the next man gets, but even understanding that, I find joy and beauty and humanity in existing. That is something everyone can relate to. We all want the same things in life. Hopefully others can identify with that.

What about absorbing Abe's pain? I never saw his dependence on pills, booze, or injections to be signs of addiction — merely ways of coping with pain to get through the day so he could continue to work.

The medicine for men like Abe is the rush. Talking to these guys, I heard the passion in their voices about how they throw themselves into life or death situations to save cowboys. For them, it is being the local hero amongst the crowd. Walking into the arena and being the man.

What are your thoughts about Abe's relationship with Sheila (Yolanda Ross), his sometimes lover?

The downtrodden and beat-up guy gets to have a little pleasure! I wish there was more of Sheila and Abe's relationship in the film. In this intimate moment, she compensates for his pain and hurt and takes over. She's the mirror saying to him you can't do this forever; but he [thinks] this is all I can do. It shows his commitment to his passion and the world of bullfighting. She thinks he needs to hang this up, and he is still hanging on. He's broken, and she is understanding. But what she goes through, seeing her lover get tossed up 20 feet in the air and come down on his head, and that she has to take care of that because these men are so against hospital services. Men like Abe think, if I don't have to go the ER, I'm alright. Why pay a doc $500 for a bandage when you can go to CVS and get one for $2.50?

Abe gives Kris a second chance, and he becomes a bit of a father figure to her. What can you say about getting a second chance in life, or where you found purpose or sense of direction?

He's a loner, and it's a lonely business. People don't want to take care of hard-headed men like Abe. Virginia State University gave me a chance to get out of my neighborhood and it showed me a different light for who I was in society. Growing up black, you are lied to and told to act in a way that isn't who you are. I made it through high school and when I arrived at VSU, I saw beautiful black and brown men and women focused on education and contributing to society. That saved my life. I always give a shout-out to VSU. They gave me a chance to grow into the person and the artist that I am, so I could be something. If it wasn't for them I would probably l be dead, to be honest.

Abe has moments of anger. He seethes at Kris when she harms his chickens. He internalizes his frustration at being cut from his rodeo work. Why does he control/express his anger in these ways? He is, perhaps, like a bull?

That's why I like that scene when Abe faces the bull in his backyard. It is as if they are having their own conversation — I see you; I recognize you. That's synonymous with Abe's personality and how he deals with his life. He tells Kris that bulls can be, "Crazy and raging with anger, but as you get close, they close their eyes and that's when they become yours." Abe is the same way. He has anger and intensity, but he still has delicacy and softness about him.

The film casually addresses themes of racism, class and economic opportunity, and the opioid crisis. Do you feel you gravitate to films like "Bull," "Mudbound," and "Just Mercy," with these kinds of themes and messages? What observations do you have about your career?

I think, by the grace of God, that the people who write and direct desire my energy to tell these stories. Dee Rees [director of "Mudbound"] fought for me; she told the producers and the studio that she would not do the movie without me. Thankfully, she did that because that character, Hap Jackson, was the first time I had more than two scenes in a movie. It showed I can tell a story from start to finish. Hap in "Mudbound" has an energy of the heartbeat of a film, and I'm being coined as that kind of actor, someone who can deliver that heartbeat. I'm thankful to have that kind of trust in the industry. I love digging deep and presenting a character that people don't come in contact with, and [my performance] can inform them. I take those characters, and I do my best to prepare and get the mindset and be as truthful as possible. I don't take it lightly. People relate to these characters.

What is your career plan? To keep working, like Abe?

Keep working and hopefully get to the point where I can create a brand and do other business. I have a body butter beauty line. I'm interested in health and wellness, and my friends encouraged me to do this. So, I made it a business. I've been selling lotion, and building my website, shadowflack.com.

"Bull" is available on demand beginning Friday, May 1.