Remember that stupid thing Donald Trump did? Hard as it is to pick, here are the top 10

Donald Trump is a dull, nasty and childish man — but his legacy of amazing idiocy will be long remembered 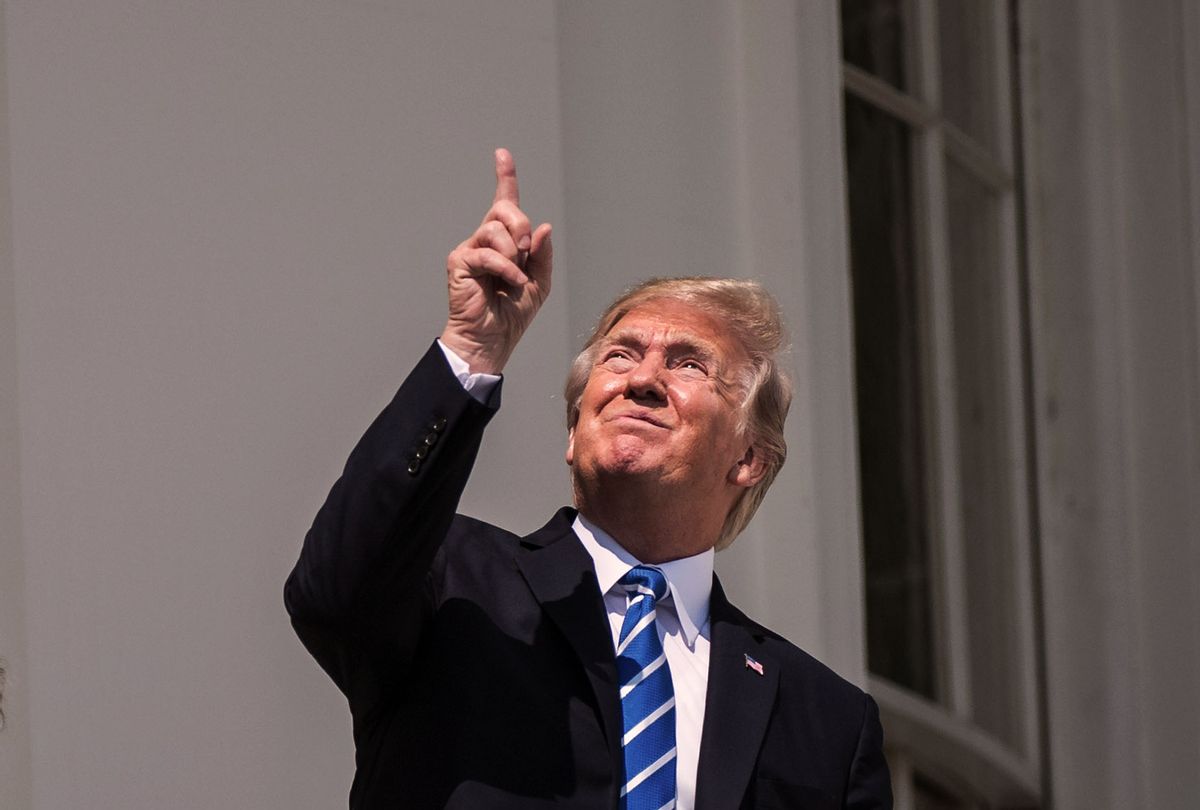 President Donald Trump looks up toward the Solar Eclipse with out glasses from a balcony at the White House in Washington, DC on Monday, Aug 21, 2017. (Jabin Botsford/The Washington Post via Getty Images)
--

We're tentatively starting to emerge from the four year-long national nightmare of Donald Trump's presidency, but the reckoning of what the nation endured will take years to really understand. Trump was terrible in so many ways that it's hard to catalog them all: His sociopathic lack of regard for others. His towering narcissism. His utter ease with lying. His cruelty and sadism. The glee he took in cheating and stomping on anything good and decent. His misogyny and racism. His love of encouraging violence, only equaled by his personal cowardice.

But of all the repulsive character traits in a man so wholly lacking in any redeemable qualities, perhaps the most perplexing to his opponents was Trump's incredible stupidity. On one hand, it was maddening that a man so painfully dumb, a man who clearly could barely read — even on those rare occasions when he deigned to wear glasses — still had the low cunning necessary to take over the Republican Party and then the White House.

On the other hand, it was the one aspect of Trump's personality that kept hope alive. Surely a man so stupid, his opponents believed, will one day blunder so badly he can't be saved, even by his most powerful sycophants. That has proved to be the case as Trump fumbles his way through a failed coup, unable and unwilling to see that stealing the election from Joe Biden is a lost cause.

Trump's unparalleled idiocy gave us a few laughs along the way, which we sorely needed in those troubled times. With that in mind, here's a list of the 10 most jaw-droppingly stupid moments of Trump's White House tenure.

1) That time Trump suggested injecting household cleaners into people's lungs to cure them of the coronavirus. Even for connoisseurs of Trumpian idiocy, it was a shocker when, after hearing that bleach and Lysol can kill the coronavirus on surfaces, got behind the podium in the White House briefing room and declared, "I see the disinfectant, where it knocks it out in a minute, one minute. ... Is there a way we can do something like that by injection inside, or almost a cleaning, because, you see, it gets in the lungs, and it does a tremendous number on the lungs?"

He then pointed at his head, and said, "I'm, like, a person who has a good you-know-what."

The situation was only made worse because this nitwit said this during the daily coronavirus "press briefing," during that surreal period of the spring and early summer in which he held forth daily, often for hours, presenting himself as not just a leader but an expert. Never has a man believed he knew so much while knowing so little.

On this date August 21 in 2017, Trump looked at the solar eclipse without protective glasses. Photo by Mark Wilson. #OTD pic.twitter.com/Hb28ZNQK9n

It was at this moment that I realized that Trump voters must like it that he's an stone cold idiot, if only because they enjoy the way it triggers the liberals.

3) That time he couldn't admit he was wrong when he tweeted that Hurricane Dorian was going to hit Alabama, and so he drew on a weather map with a Sharpie to make it seem like he was right.

The black outlined area on this very outdated @NHC_Atlantic #Dorian graphic that Trump just used in his update was added and not a part of the official forecast. @WhiteHouse pic.twitter.com/XMQmepPyj6

Again, what really elevates some of the best dumbass-Trump moments is when his stupidity combines with his massive ego to create a dunderhead singularity.

4) That time he threw paper towels at people in Puerto Rico who had just endured Hurricane Maria.

Here's a pic of Trump tossing paper towels into a crowd as he hands out supplies in Puerto Rico. (via AP/Evan Vucci) pic.twitter.com/TgYE9pZ5Kb

Trump's ego plus Trump's stupidity is just sublime. But when his stupidity combined with racism, the effect was often more chilling than funny.

5) That time he asked members of the National Security Council if they could nuke hurricanes rather than letting them hit the U.S.

Hurricanes drew out Trump's fatuousness like a good cheese draws out the notes in fine wine.

6) That time Trump was told to talk about Frederick Douglass at a Black History Month event, clearly had no idea who that was, and while trying to bullshit his way through the talk, implied that Douglass was still alive.

"Douglass is an example of somebody who's done an amazing job and is being recognized more and more, I notice," Trump said, using the same strategy that a sixth-grader who hasn't read the book might employ to bluff through a book report. There was a piece of paper in front of Trump that likely had more information about the author and abolitionist who was born enslaved and died in 1895 as one of the most famous Americans, but Trump, as ever too vain to wear his glasses in public, probably couldn't read it.

7) That time he suggested that his much-desired border wall could just maybe be buttressed with alligator moats.

This one was fondly remembered by the Salon staff as an iconic example of the way Trump's racism amplifies his imbecility in an almost exponential fashion.

At this point one almost wants to give him half-credit for remembering that the White House was burned down at one point — by the British in the War of 1812. But then one remembers that Trump has declared himself the protector and savior of American history, so much so that he's created the "1776 Commission" in a supposed effort to preserve what he considers the proper teaching of history. All he means by that, of course, is teaching kids that the blatant racism of the past was noble and just, and not so much actual facts, let alone actual history.

This is a deep cut, but a personal favorite of mine, mostly because Ashley Feinberg at Slate did a detailed exploration of this topic and demonstrated it was almost certainly the result of stupidity, horniness and Trump's short and stubby fingers. It started when Trump liked — and then unliked — a tweet by a woman named Heben Nigatu declaring, "Every new Rihanna interview makes me grow stronger. We stan a work/life balance queen!!!"

As further evidence, Feinberg points out Trump had, in the past, done the same to a sexy photo of Katy Perry.

10) When he called the Second Epistle to the Corinthians "Two Corinthians."

This is another personal favorite, because, like many other of Trump's dumber moments — such as when he tried to put money on a communion platter, or when he held a Bible as if he were afraid it might bite him, or when he seemed confused by the idea that he should ask God for forgiveness — it was a fun reminder that Trump's professed Christianity is not just an act, but an act he can barely be bothered to keep going. It's delicious because it's a twofer, not just exposing Trump's stupidity, but the absolute shamelessness of the Christian right leaders who backed him. (For those who may be unclear: This book of the Bible is abbreviated as "2 Corinthians" but always called "Second Corinthians.")

Every time Trump fumbled in this way, and the Trump-friendly evangelists kept on acting like he was God's emissary on earth, it was further evidence that most of these supposedly devout Christians don't really care about faith or God or Jesus or any of that that stuff — they care about power. As with their beloved president, dramatic performance of public piety by so many right-wing Christian leaders is little more than a dog-and-pony show put on to sucker the rubes.

So there's your top 10, with the caveat that it was hard — perhaps impossible — to narrow down that number in a satisfying manner, since Trump has done unbelievably stupid crap virtually every single day for four years. But that's why the internet gods invented social media and comment sections, so you can add your own to the list!