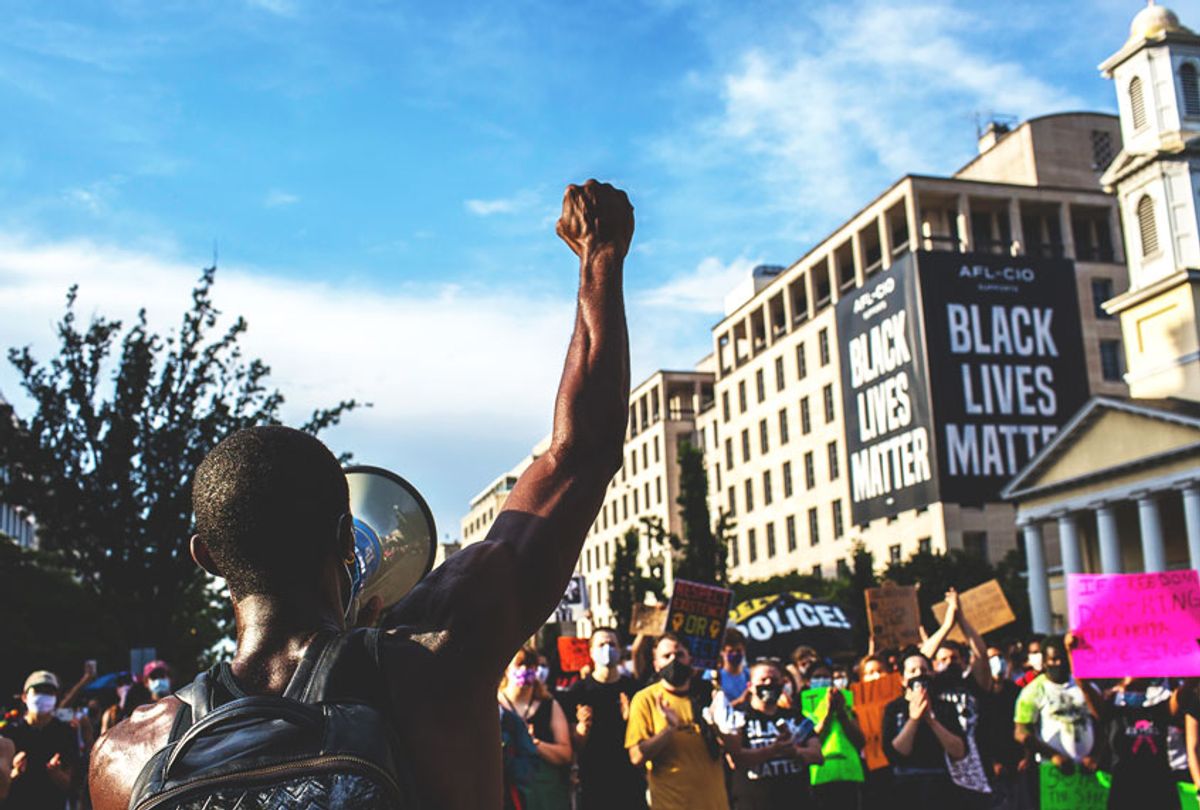 A demonstrator raises his fist at a gathering to celebrate Juneteenth at the 16th street "Black Lives Matter Plaza" near the White House. The US marks the end of slavery by celebrating Juneteenth, with the annual unofficial holiday taking on renewed significance as millions of Americans confront the nation's living legacy of racial injustice. (Probal Rashid/LightRocket via Getty Images)
--

On Wednesday, The Seattle Times reported that during the protests last year, Seattle police improperly spread fake reports that Proud Boys were on the move on police radio transmissions in an effort to intimidate the demonstrators.

"At a crucial moment during 2020's racial justice protests, Seattle police exchanged a detailed series of fake radio transmissions about a nonexistent group of menacing right-wing extremists," reported Daniel Beekman. "The radio chatter about members of the Proud Boys marching around downtown Seattle, some possibly carrying guns, and then heading to confront protesters on Capitol Hill was an improper 'ruse,' or dishonest ploy, that exacerbated a volatile situation, according to findings released Wednesday by the city's Office of Police Accountability."

The protests were some of many around the country in the summer that flared in response to multiple high-profile police brutality cases, including the murder of George Floyd.

"The ruse happened on the night of June 8, 2020, hours after the Police Department had abandoned its East Precinct on Capitol Hill and just as protesters were starting to set up the zone that was later called the Capitol Hill Organized Protest, or CHOP," said the report. "The officers who participated described a group gathering by City Hall and moving around downtown. They delivered reports such as, 'It looks like a few of them might be open carrying,' and: 'Hearing from the Proud Boys group. … They may be looking for somewhere else for confrontation.'"

According to OP Director Andrew Myerburg's report, the fake broadcasts "improperly added fuel to the fire," as social media posts warning about the nonexistent Proud Boys caused CHOP demonstrators to arm themselves and create barricades.

The Proud Boys are a far-right group of self-described "Western Chauvinists" infamous for their street brawls and linked to white supremacists. Many of their members were involved in the January 6 attack on the U.S. Capitol to try to stop the counting of electoral votes for President Joe Biden.