The U.S. drops an average of 46 bombs a day: Why should the world see us as a force for peace?

The U.S. has dropped at least 337,000 bombs and missiles in 20 years — and now clutches its pearls over Russia 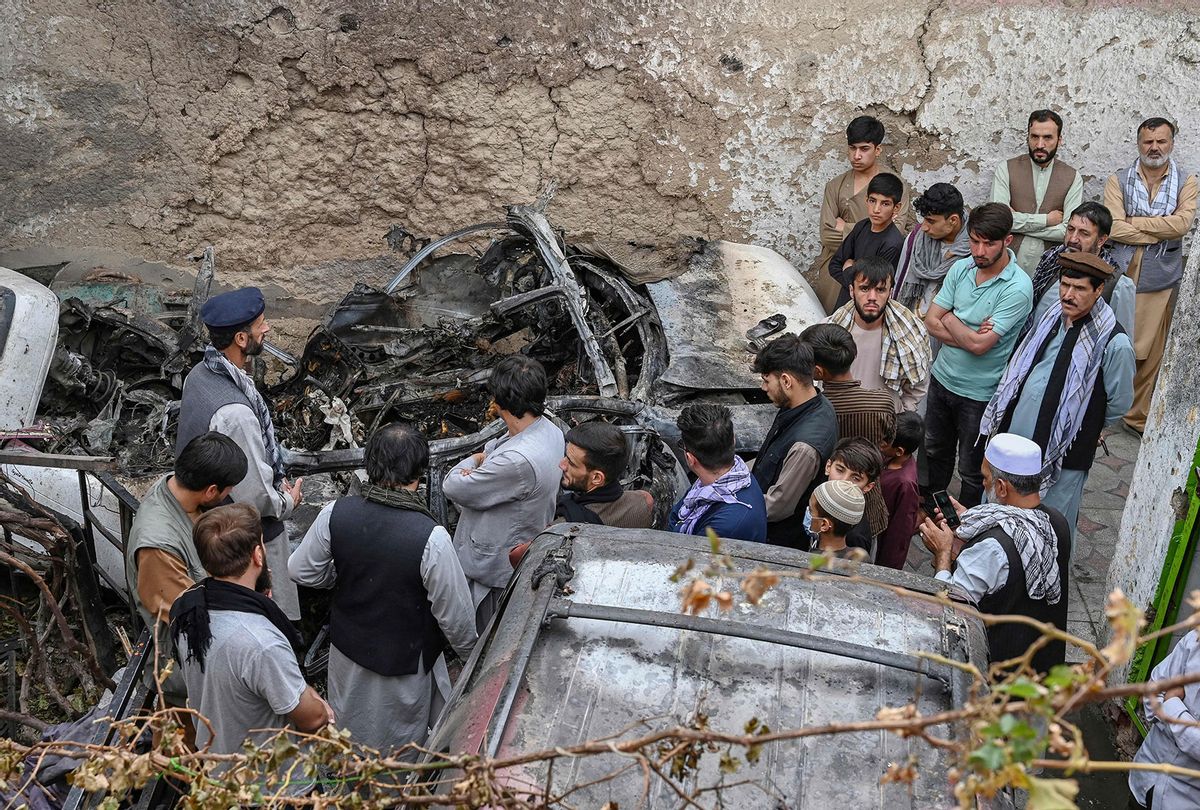 Afghan residents and family members of the victims gather next to a damaged vehicle inside a house, day after a US drone airstrike in Kabul on August 30, 2021. (WAKIL KOHSAR/AFP via Getty Images)
--

The Pentagon has finally published its first Airpower Summary since President Biden took office nearly a year ago. These monthly reports have been published since 2007 to document the number of bombs and missiles dropped by U.S.-led air forces in Afghanistan, Iraq and Syria since 2004. But President Trump stopped publishing them after February 2020, shrouding continued U.S. bombing in secrecy.

Over the past 20 years, as documented in the table below, U.S. and allied air forces have dropped more than 337,000 bombs and missiles on other countries. That's an average of 46 strikes per day for 20 years. This endless bombardment has not only been deadly and devastating for its victims but is broadly recognized as seriously undermining international peace and security and diminishing America's standing in the world.

The U.S. government and political establishment have been remarkably successful at keeping the American public in the dark about the horrific consequences of these long-term campaigns of mass destruction, allowing them to maintain the illusion of U.S. militarism as a force for good in the world in their domestic political rhetoric.

Now, even in the face of the Taliban takeover in Afghanistan, they are doubling down on their success at selling this counterfactual narrative to the American public to reignite their old Cold War with Russia and China, dramatically and predictably increasing the risk of nuclear war.

The new Airpower Summary data reveal that the United States has dropped another 3,246 bombs and missiles on Afghanistan, Iraq and Syria (2,068 under Trump and 1,178 under Biden) since February 2020.

The good news is that U.S. bombing of those three countries has significantly decreased from the over 12,000 bombs and missiles it dropped on them in 2019. In fact, since the withdrawal of U.S. occupation forces from Afghanistan in August, the U.S. military has officially conducted no air strikes there, and only dropped 13 bombs or missiles on Iraq and Syria — although this does not preclude additional unreported strikes by forces under CIA command or control.

Trump and Biden both deserve credit for recognizing that endless bombing and occupation could not deliver victory in Afghanistan. The speed with which the U.S.-installed government fell to the Taliban once the U.S. withdrawal was under way confirmed that 20 years of hostile military occupation, aerial bombardment and support for corrupt governments ultimately served only to drive the war-weary people of Afghanistan back to Taliban rule.

Biden's callous decision to follow 20 years of colonial occupation and aerial bombardment in Afghanistan with the same kind of brutal economic siege warfare the United States has inflicted on Cuba, Iran, North Korea and Venezuela can only further discredit America in the eyes of the world.

There has been no accountability for these 20 years of senseless destruction. Even with the publication of Airpower Summaries, the ugly reality of U.S. bombing wars and the mass casualties they inflict remain largely hidden from the American people.

How many of the 3,246 attacks documented in the Airpower Summary since February 2020 were you aware of before reading this article? You probably heard about the drone strike that killed 10 Afghan civilians in Kabul in August 2021. But what about the other 3,245 bombs and missiles? Whom did they kill or maim, and whose homes did they destroy?

The December 2021 New York Times exposé of the consequences of U.S. airstrikes, the result of a five-year investigation, was stunning not only for the high civilian casualties and military lies it exposed, but also because it revealed just how little investigative reporting the U.S. media have done on these two decades of war.

In America's industrialized, remote-control air wars, even the U.S. military personnel most directly and intimately involved are shielded from human contact with the people whose lives they are destroying, while for most of the American public, it is as if these hundreds of thousands of deadly explosions never even happened.

The lack of public awareness of U.S. airstrikes is not the result of a lack of concern for the mass destruction our government commits in our names. In the rare cases we find out about, like the murderous drone strike in Kabul in August, the public wants to know what happened and strongly supports U.S. accountability for civilian deaths.

So public ignorance of 99% of U.S. air strikes and their consequences is not the result of public apathy, but of deliberate decisions by the U.S. military, politicians of both parties and corporate media to keep the public in the dark. The largely unremarked 21-month-long suppression of monthly Airpower Summaries is only the latest example of this.

Now that the new Airpower Summary has filled in the previously hidden figures for 2020-21, here is the most complete data available on 20 years of deadly and destructive U.S. and allied air strikes. 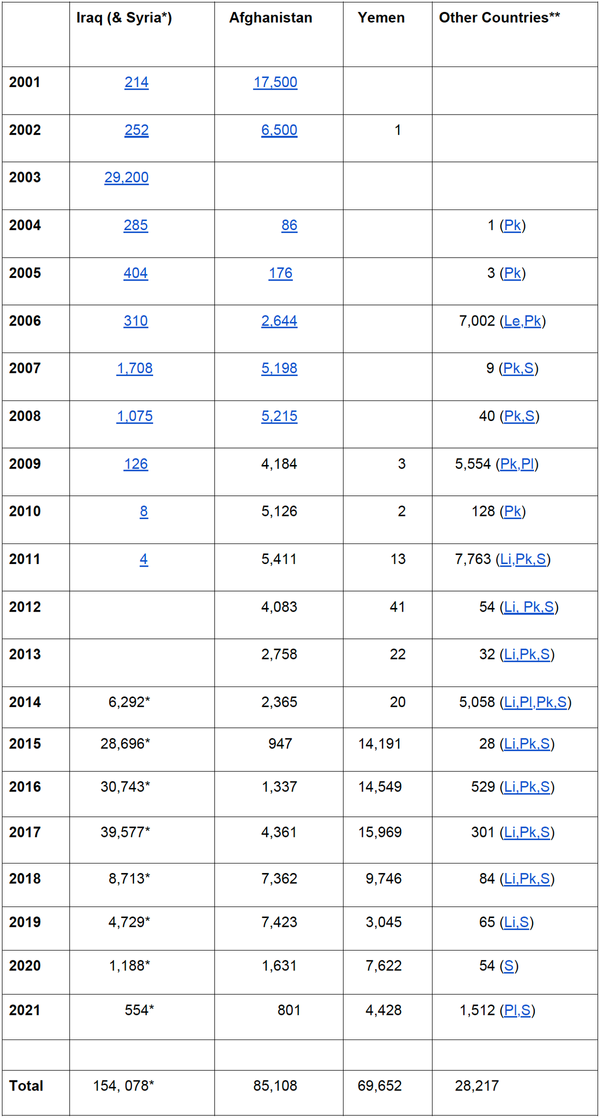 Numbers of bombs and missiles dropped on other countries by the United States and its allies since 2001. (Chart by Medea Benjamin and Nicolas J.S. Davies)

These figures are based on U.S. Airpower Summaries for Afghanistan, Iraq and Syria; the Bureau of Investigative Journalism's count of drone strikes in Pakistan, Somalia and Yemen; the Yemen Data Project's count of bombs and missiles dropped on Yemen (through September 2021); the New America Foundation's database of foreign air strikes in Libya and other sources.

There are several categories of air strikes that are not included in this table, meaning that the true numbers of weapons unleashed are certainly higher. These include:

Helicopter strikes: Military Times published a February 2017 article titled, "The U.S. military's stats on deadly air strikes are wrong. Thousands have gone unreported." The largest pool of air strikes not included in Airpower Summaries are strikes by attack helicopters. The Army told the authors its helicopters had conducted 456 otherwise unreported air strikes in Afghanistan in 2016. The authors explained that the non-reporting of helicopter strikes has been consistent throughout the post-9/11 wars, and they still did not know how many missiles were fired in those 456 attacks in Afghanistan in the one year they investigated.

AC-130 gunships: The U.S. military did not destroy the Doctors Without Borders hospital in Kunduz, Afghanistan, in 2015 with bombs or missiles, but with a Lockheed-Boeing AC-130 gunship. These machines of mass destruction, usually manned by Air Force special operations forces, are designed to circle a target on the ground, pouring howitzer shells and cannon fire into it until it is completely destroyed. The U.S. has used AC-130s in Afghanistan, Iraq, Libya, Somalia and Syria.

Strafing runs: Airpower Summaries from 2004 to 2007 included a note that their tally of "strikes with munitions dropped … does not include 20mm and 30mm cannon or rockets." But the 30mm cannons on A-10 Warthogs and other ground attack planes are powerful weapons, originally designed to destroy Soviet tanks. A-10s can fire 65 depleted uranium shells per second to blanket an area with deadly and indiscriminate fire. But that does not appear to count as a "weapons release" in Airpower Summaries.

"Counter-insurgency" and "counter-terrorism" operations in other parts of the world: The U.S. formed a military coalition with 11 West African countries in 2005, and has built a drone base in Niger, but we have not found any systematic accounting of U.S. and allied air strikes in that region, or in the Philippines, Latin America or elsewhere.

The failure of the U.S. government, politicians and corporate media to inform and educate the American public about the systematic mass destruction wreaked by our country's armed forces has allowed this carnage to continue largely unremarked and unchecked for 20 years.

It has also left us precariously vulnerable to the revival of an anachronistic, Manichean Cold War narrative that risks even greater catastrophe. In this topsy-turvy, "through the looking glass" narrative, the country that is actually bombing cities to rubble and waging wars that kill millions of people presents itself as a well-intentioned force for good in the world. Then it paints countries like China, Russia and Iran, which have strengthened their defenses largely in order to deter the U.S. from attacking them, as threats to the American people and to world peace.

The high-level talks beginning this week in Geneva between the U.S. and Russia are a critical opportunity, maybe even a last chance, to rein in the escalation of the current Cold War before this breakdown in East-West relations becomes irreversible or devolves into military conflict.

If we are to emerge from this morass of militarism and avoid the risk of an apocalyptic war with Russia or China, the U.S. public must challenge the counterfactual Cold War narrative that U.S. military and civilian leaders are peddling to justify their ever-increasing investments in nuclear weapons and the U.S. war machine.