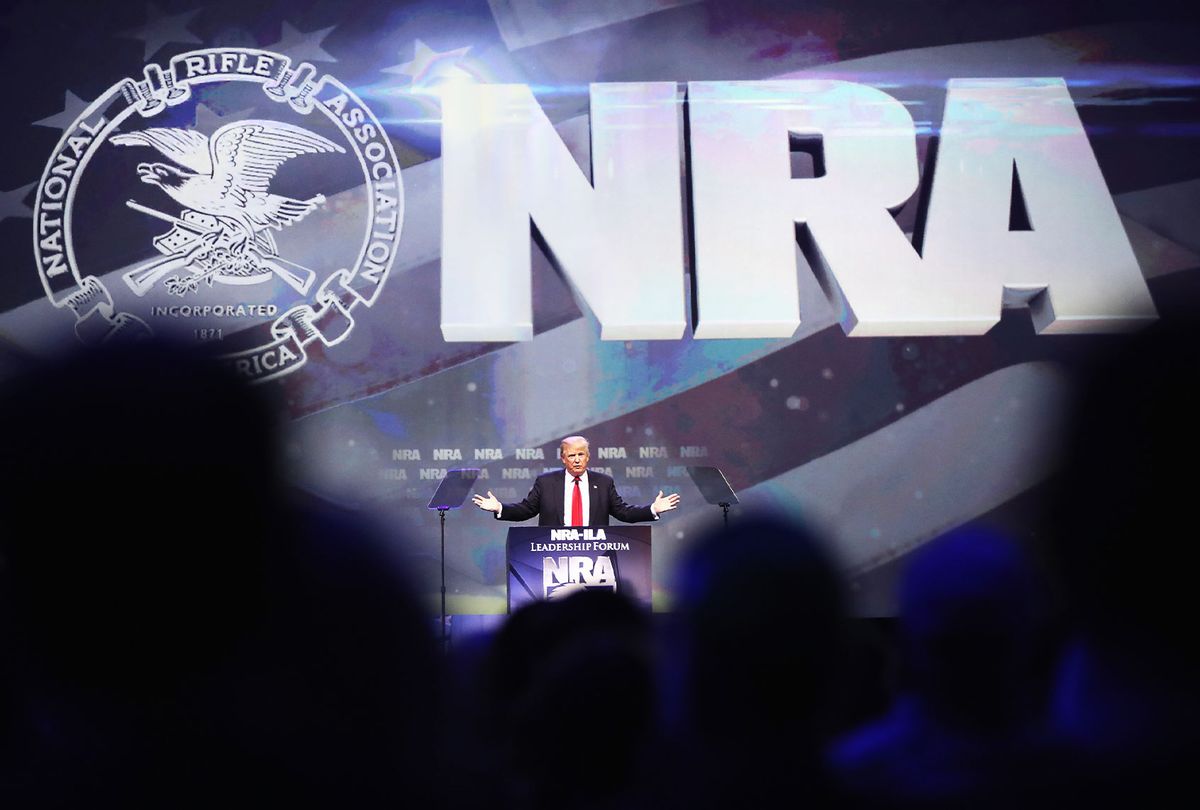 Republican presidential candidate Donald Trump speaks at the National Rifle Association's NRA-ILA Leadership Forum during the NRA Convention at the Kentucky Exposition Center on May 20, 2016 in Louisville, Kentucky. The NRA endorsed Trump at the convention. (Scott Olson/Getty Images)
--

The latest round of subpoenas issued by the Jan. 6 committee targeted 14 people accused of submitting falsified Electoral College paperwork across seven states — part of an ultimately unsuccessful attempt to subvert 2020 election results and have former President Donald Trump declared the victor in states won by current President Joe Biden.

"The select committee is seeking information about attempts in multiple states to overturn the results of the 2020 election, including the planning and coordination of efforts to send false slates of electors to the National Archives," the committee's chairman, Rep. Bennie Thompson, D-Miss., said in a statement. "We believe the individuals we have subpoenaed today have information about how these so-called alternate electors met and who was behind that scheme."

According to The New York Times, the 14 people subpoenaed were: "Nancy Cottle and Loraine B. Pellegrino of Arizona; David Shafer and Shawn Still of Georgia; Kathy Berden and Mayra Rodriguez of Michigan; Jewll Powdrell and Deborah W. Maestas of New Mexico; Michael J. McDonald and James DeGraffenreid of Nevada; Bill Bachenberg and Lisa Patton of Pennsylvania; and Andrew Hitt and Kelly Ruh of Wisconsin."

One name in particular sticks out from the list — Bill Bachenberg, who has been on the National Rifle Association's Board of Directors since 2005, according to his LinkedIn page and leaked 2018 election results viewed by Salon. Bachenberg did not immediately return a request for comment.

Bachenberg has a documented history with TrumpWorld — he reportedly hosted Trump's son, Donald Trump Jr., at a skeet shooting range he owns in Pennsylvania, and served as co-chair of an official campaign group called Sportsmen for Trump.

He also went viral during the 2020 presidential campaign for laughing along with audience members while speaking at an official Trump fundraiser as they suggested shooting Texas Democrat Beto O'Rourke, who campaigned for his party's 2020 nomination with a strong stance on gun control.

The NRA's unusually large board of directors — according to an investigation from Mother Jones in 2013 there were upwards of 76 members elected via a "hush-hush" process — has come under increasing scrutiny in recent years. One board member, Roscoe "Rocky" Marshall, alleged in a lawsuit last year that the board acted as a "rubber stamp" for longtime NRA leader Wayne LaPierre and resisted calls for independent probes into his misuse of organizational funds.

Another director's name was found on the leaked membership rolls of right-wing militia group the Oath Keepers, who saw 11 members and its longtime leader, Stewart Rhodes, charged with seditious conspiracy earlier this month for their role in the attempted Jan. 6 insurrection.

Given this history, a representative for prominent gun control group Everytown for Gun Safety said the revelation that an NRA board member may have been involved in efforts to subvert the 2020 election "both deeply concerning and unsurprising."

"For decades the NRA has peddled the conspiracy theories and lies that fuel the far-right, so it's both deeply concerning and unsurprising that one of their board members is believed to be connected to efforts to overturn the results of the 2020 election," Justin Wagner, senior director of investigations for the nonprofit, said. "The kind of fear mongering and lies the gun lobby has spread have been the underpinnings for the resurgence of the far-right in recent years, and the dangerous policies the gun lobby pushes allow extremists to arm themselves."

At least one former White House aide, Boris Epshteyn, admitted to organizing the fake elector campaign on national TV last week, telling MSNBC, "Yes, I was part of the process to make sure there were alternate electors" — though he insisted that "everything that was done was done legally."

Attorneys General in at least two states have already referred investigations to the Department of Justice for criminal prosecution — an effort that legal experts predict is likely to expand in the coming weeks.

Michigan Attorney General Dana Nessel, a Democrat who has been especially critical of the plot, has said she believes the people who participated in the plot violated both state and federal laws through their efforts.