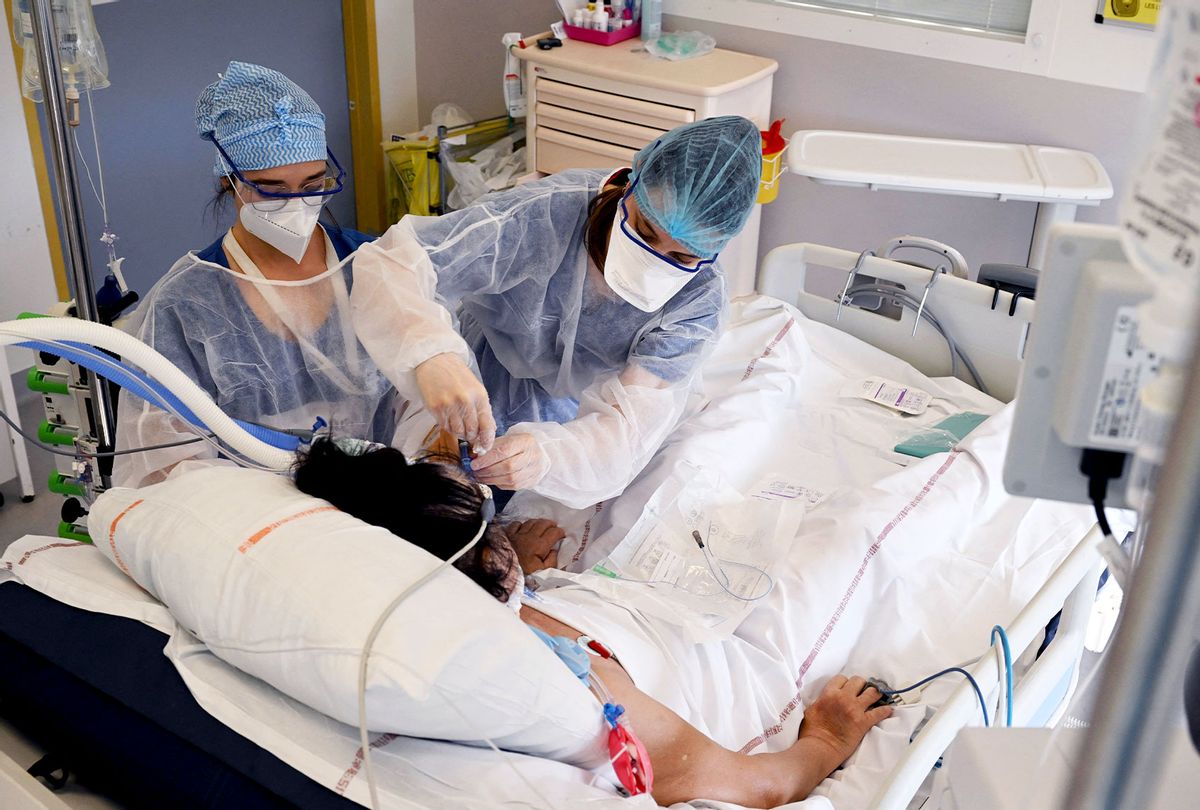 Nurses take care of a patient infected with the Covid-19 at the intensive care unit of the Timone hospital, in Marseille, southern France on January 5, 2022. - France set a record for new Covid cases over a 24-hour period on January 5, 2022 with 335,000 additional infections recorded, Health Minister Olivier Veran told parliament. (NICOLAS TUCAT/AFP via Getty Images)
--

Compared to earlier variants of COVID-19, the omicron variant is often referred as "mild."

Yet many of those who are stricken with this iteration of the virus have discovered that "mild" is a relative term.

According to the Centers for Disease Control and Prevention (CDC), symptoms of the omicron variant include cough, fatigue, congestion and a runny nose. This week, the World Health Organization (WHO) announced that nearly 21 million Covid cases were reported to the WHO over the last week, setting a new global record for weekly cases due to the rapid spread. As more people are getting infected with omicron (vaccinated, boosted, and unvaccinated) due to its increased contagiousness and ability to evade immunity, many of those who are infected are surprised when their symptoms aren't exactly what they'd consider mild.

Tom Womack, a 54-year-old in Texas, got a breakthrough infection over Christmas. Womack was fully vaccinated (although not boosted, because he recently started a new job and didn't want to miss work), though most of the people he went to dinner with were both vaccinated and boosted — including his girlfriend. Womack suspects this outing was where he contracted COVID-19. At the restaurant where they dined out, the staff did not wear masks. Within 24 hours of the outing, one of the dinner's attendees started to feel sick. On Christmas morning, Womack went for a hike with his girlfriend.

"Although we hike often it was really challenging for us that day," Womack said via email. "We were both really tired and out [of] breath the entire time."

Later that night, Womack felt unusually tired. His toes and fingers were sore — then the cold chills started.

RELATED: Omicron variant of COVID-19 may be the most contagious virus to ever exist, scientists say

"Bone-crushing cold chills that literally had me shaking, a pounding headache and fever started at the same time," Womack said. "I wore a jacket to bed under the blankets and comforter and still couldn't get warm. I woke up a few hours soaked in a cold sweat, still with a pounding headache. The chills had largely faded, but now I was hot."

Womack said his girlfriend felt fine that night, but had similar— albeit milder — symptoms the next morning.

"The first couple days were the worst for both of us, the cold chills went away after the first night and my fever subsided within 24 to 48 hours," Womack explained. "After that, it felt like a regular cold with congestion, fatigue and a dry cough."

Still, Womack had "pounding headaches nearly all day, every day," which lasted for two weeks.

"Even after we both recovered and felt fine, both Liz and I had long-term fatigue," Womack said. "Every afternoon for more than two weeks, I literally couldn't focus or stay awake and would have to take a 20 to 30 minute nap around 2 or 3 pm."

There is debate as to whether it is a good idea to promote the narrative that the omicron variant yields only "mild" cases. According to a report published by Imperial College London on December 22, 2021, COVID-19 patients with the omicron variant were 20 to 25 percent less likely to be hospitalized compared to those who had delta. Omicron patients also had a 40 to 45 percent reduced risk of a hospital stay that lasted more than one day, compared to delta. These statistics are where the notion that omicron is "mild" is derived from. But some scientists fret over the designation.

"I think it's pretty clear omicron causes less severe disease than the delta variant, but that's not saying much," Zoë Hyde, an epidemiologist at the University of Western Australia, told The Scientist. "We know that delta was more than twice as severe as the original strain, and if Imperial College is right to say that omicron is about 40-45% less likely to put people in hospital [than delta was], we're back to 2020 but with a more contagious strain."

More recent research shows that omicron appears to spare the lungs, unlike delta. Still, many patients report miserable symptoms. Marcos Martinez, a 36-year-old living in New York City, got COVID-19 over the holidays as omicron started to spread across the city. His case started with an ear infection.

"The ear infection was so bad I couldn't even fall asleep," Martinez said. "I'm not sure that the infection was separate or was a one to symptoms, but that definitely wasn't mild."

Dr. Amesh Adalja, a senior scholar at the Johns Hopkins Center, told Salon that one's individual experience with COVID-19 "varies based on their own idiosyncrasies."

"When a Covid case is referred to as mild, that is still a spectrum of illness. Some people may experience nothing at all or maybe mild nasal congestion whereas others may be confined to the couch for a couple of days," Adalja said. "However, what is in common among these cases is that these are not going to, generally, be cases that prompt people to visit an emergency department."

Adalja added that a person infected with COVID-19 should seek immediate medical attention if they're experiencing "shortness of breath, severe weakness, [or] unremitting fever."

"While omicron does appear to be less severe compared to delta, especially in those vaccinated, it does not mean it should be categorized as mild," Tedros said earlier this month. "Just like previous variants, omicron is hospitalizing people and it is killing people."

"In fact, the tsunami of cases is so huge and quick, that it is overwhelming health systems around the world," Tedros continued.

However, there are some who did experience what they consider to be "mild" cases. Donna Gleize, who lives in Toulon, France, said she was relieved that the symptoms she experienced weren't "fierce."

"The symptoms were slight fever, feeling cold, heavy headache, sore throat, and body aches," Gleize wrote in an email to Salon. "Lasted 48 hours for both my husband and I, and we are both vaccinated (x2)."