In Earth's galactic backyard, a never-before-seen space anomaly blinks on and off 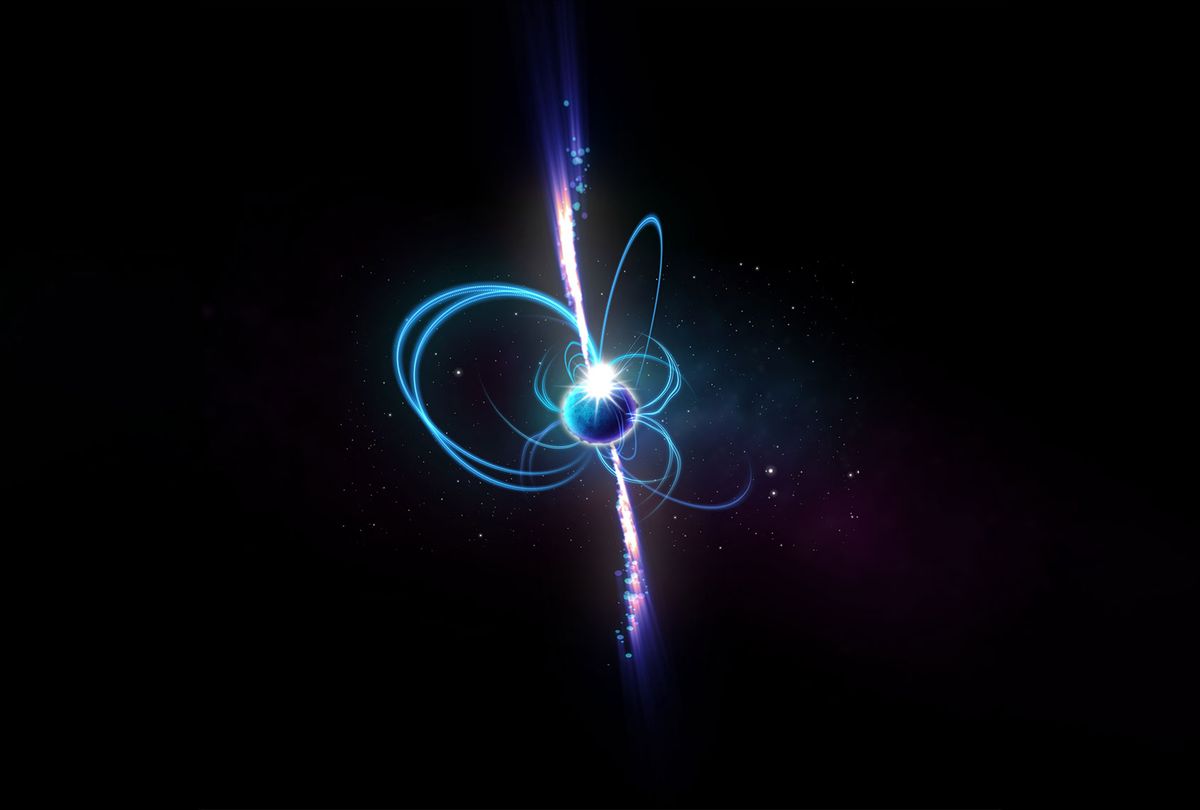 Magnetar. An artist’s impression of what the object might look like if it’s a magnetar. Magnetars are incredibly magnetic neutron stars, some of which sometimes produce radio emission. Known magnetars rotate every few seconds, but theoretically, “ultra-long period magnetars” could rotate much more slowly. (Photo courtesy of The International Centre for Radio Astronomy Research (ICRAR))
--

Astronomers believe they may have discovered an "'ultra-long period magnetar," a hypothetical type of neutron star that rotates remarkably slowly due to the way it interacts with surrounding ionized gas — yet scientists caution that more observational data is needed to better confirm this so-called "spooky" unknown object that is not that far away (galactically speaking) from Earth.

The object belongs to a caste of astronomical events called "transients," which are by nature short-lived and in flux. When astronomers are observing transients in the universe, they are generally observing the unusual activity of a massive star, or the behavior of the remnants that star has left behind. Pulsars, which sometimes emit a bright flash over a period of second or milliseconds, are known as fast transients. Slow transients, such as a supernovae, become extremely luminous over days or months. And then there are ​​fast-radio bursts, or FRBs for short, which are very brief yet incredibly powerful bursts of radio wave energy that appear to be coming from all corners of the universe, yet whose origins are still ill-understood.

Now, astronomers have discovered a new, unknown kind of transient in our galaxy that flashes three times an hour — about every 18 minutes. This transient object has become one of the brightest radio objects in the sky, and its flash lasts between a half of a second to a minute. This slow timeframe, compounded with extreme brightness, makes it a peculiar discovery, according to a paper published in Nature.

"The emission is highly linearly polarized, bright, persists for 30–60 [seconds] on each occurrence and is visible across a broad frequency range," the scientists explain in the paper. "At times, the pulses comprise short-duration (<0.5 [second]) bursts; at others, a smoother profile is observed."

The co-authors add: "By measuring the dispersion of the radio pulses with respect to frequency, we have localized the source to within our own Galaxy and suggest that it could be an ultra-long-period magnetar."

A magnetar is a specific type of neutron star with a very strong magnetic field; neutron stars are the collapsed remnants of much-larger stars. They are formed when a large star becomes so dense in its core that gravity collapses it in on itself, resulting in a chain reaction that smushes negative electrons and positive protons together into neutral neutrons, releasing huge amounts of energy in the process. Essentially huge balls of neutrons, neutron stars have the density of atomic nuclei, the mass of suns, yet are small — typically the width of human cities. Their density is legendary; a commonly quoted and true statistic is that a teaspoon of neutron star material would weigh around one billion tons.

Neutron stars generally spin fast on their axes, and the energetic processes which take place within release powerful radio waves from their poles. The radio emissions from such stars were initially believed to be aliens when such signals were first detected in 1967.

RELATED: A mysterious and powerful radio signal from space is repeating itself

The reason that neutron stars generally rotate so fast is the same reason that a swivel chair spins faster if you extend your arms and bring them in as you start to spin. Because of conservation of angular momentum, a physics principle, any object that is spinning will spin faster if it suddenly shrinks in width. For instance, Earth's sun spins about once every 22 days, though if the sun were to suddenly contract into a tiny neutron star, it would spin thousands of times per second.

This is partly what makes this new discovery so unusual. Unlike many neutron stars, which spin hundreds or thousands of times per second, this theoretical ultra-long period magnetar is spinning much more slowly than any other one observed.

Astronomers made the discovery of this likely ultra-long period magnetar by using the Murchison Widefield Array (MWA) telescope, a low-frequency radio telescope in Western Australia, when it was being used by Curtin University Honors student Tyrone O'Doherty. The team has been using the telescope to map radio waves in the universe.

"This object was appearing and disappearing over a few hours during our observations," said Dr. Natasha Hurley-Walker, an astronomer with the Curtin University node of the International Centre for Radio Astronomy Research and co-author of the paper. "That was completely unexpected. It was kind of spooky for an astronomer because there's nothing known in the sky that does that."

Notably, the object is about 4,000 light-years away — which, as Hurley-Walker noted, is "in our galactic backyard." For comparison, our galaxy, the Milky Way, is around 100,000 light-years across, and the nearest neighboring galaxy, Andromeda, is 2.5 million light years away from us.

The research team credits the telescope's wide field of view and extreme sensitivity for being able to pick up this strange radio object. The object was super bright in the radio spectrum — though not in the visible spectrum, meaning it can't be seen with the naked eye. Scientists suspect that its strong radio emissions be a result of the object having a very strong magnetic field, which fits the profile for it possibly being the hypothetical "'ultra-long period magnetar."

"It's a type of slowly spinning neutron star that has been predicted to exist theoretically," Hurley-Walker said. "But nobody expected to directly detect one like this because we didn't expect them to be so bright. Somehow it's converting magnetic energy to radio waves much more effectively than anything we've seen before."

A related class of transient object, fast radio bursts, are very difficult to study by dint of their brief duration. Very few fast radio bursts ever repeat; and since they only last a millisecond, telescopes can rarely focus on them in time to get a good look. Moreover, astronomers do not quite know exactly where fast radio bursts are coming from, or where the next one might land.

Yet this new strange transient object in question is believed to have switched on in the first part of 2018, when it emitted 71 flashes of radio signals between January to March of that year. Then, it switched off. Kiyoshi Masui, an assistant professor of physics at the Massachusetts Institute of Technology — who wasn't involved in the study — told NBC News that it's possible FBRs and magnetars could be related.

"If this object is, in fact, a magnetar, that could mean that at least some types of magnetars can survive much longer than we thought they could," Masui said. "That could solve the thorn in the side of the magnetar hypothesis for fast radio bursts."

"Ultra-long period magnetars are a potential progenitor for Fast Radio Bursts, and we do see spikes in our data that are unresolved at our time resolution (0.5s)," Hurley-Walker  said. "If we could find more of these repeating low-frequency transients, and look at them with higher time resolution, we could test whether they can generate FRBs."

Hurley-Walker emphasized this possible connection has yet to be confirmed.

Dr Hurley-Walker is now monitoring the object to see if it turns back on, as more detections are needed to better understand the source of these strange radio waves.

"I'm planning a campaign with the Murchison Widefield Array to scan our galaxy every week and search for more, and process the data in near-real time," Hurley-Walker told Salon. "If we make a detection, we can then follow it up immediately with high time resolution radio observations, and other telescopes, and that will be absolutely critical in understanding these sources."

Hurley-Walker said if they do find enough of these sources, "simply looking at where they are in the Milky Way — their range of brightnesses, how they pulse, how long they live, et cetera — will help us understand them."

But, as Hurley-Walker cautioned, neutron stars are "stunningly hard to spot."

"If it's not emitting in the radio [spectrum] (and it isn't at the moment) we might never see anything again," Hurley-Walker said.