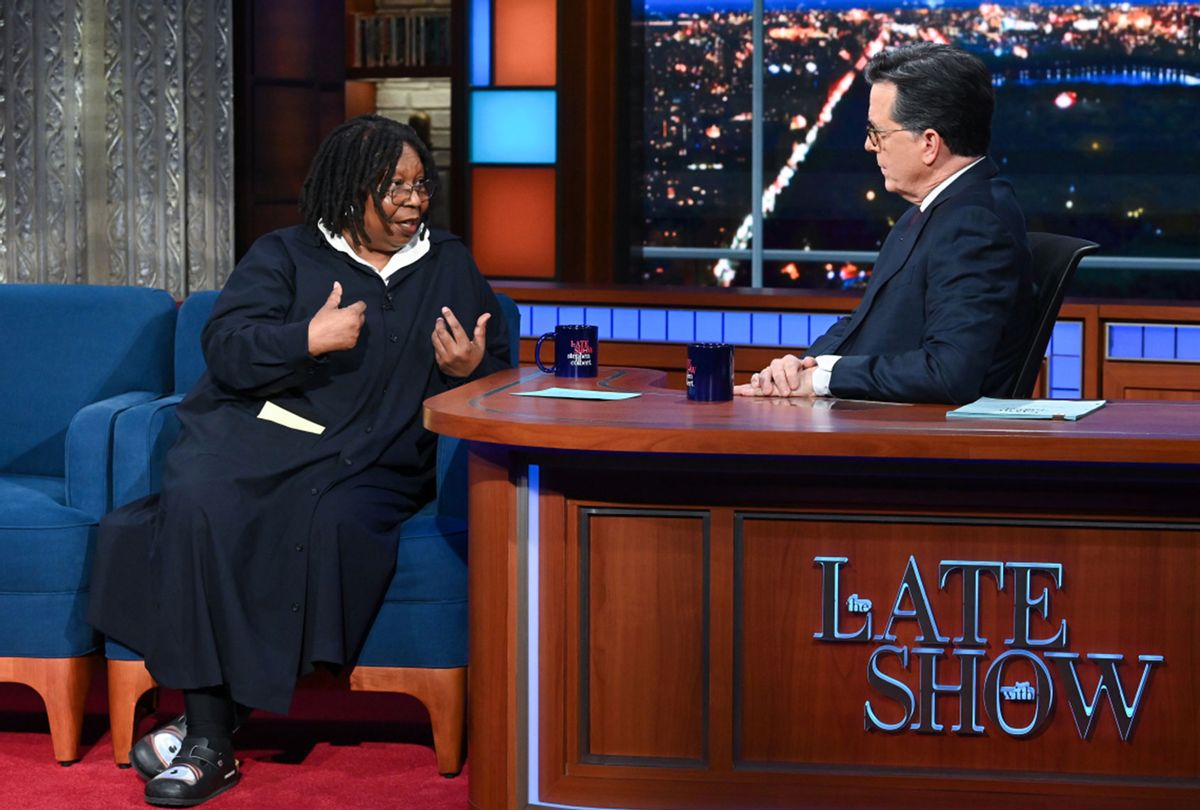 There are consequences for even the liberal co-hosts on "The View," despite what one former member believes.

Whoopi Goldberg has reportedly been suspended from the ABC talk show over harmful and erroneous comments she made about the Holocaust, CNN's Oliver Darcy tweeted out late Tuesday.

"BREAKING: Whoopi Goldberg has been suspended from 'The View' for two weeks, I'm told," reads his first post, quickly followed by, "In a note to staff, ABC News prez Kim Godwin says, 'While Whoopi has apologized, I've asked her to take time to reflect and learn about the impact of her comments. The entire ABC News organization stands in solidarity with our Jewish colleagues, friends, family and communities.'"

The controversy started on Monday, following the show's discussion on a Tennessee school board's ban of Art Spiegelman's award-winning graphic novel "Maus," which is about the Holocaust.

"Let's be truthful about it because the Holocaust isn't about race," Goldberg said on "The View." "It's not about race. It's not about race. It's about man's inhumanity to man. That's what it's about . . . these are two white groups of people! You're missing the point. The minute you turn it into race it goes down this alley. Let's talk about it for what it is. It's how people treat each other. It doesn't matter if you're Black or white, Jews, it's each other."

Goldberg's comments quickly sparked backlash on Twitter. The official account for the Auschwitz memorial and museum in Poland tagged Goldberg in a tweet with an image of a chart outlining the racial policies of Nazi Germany. The non-profit watchdog organization, StopAntisemitism.org, shot back with a separate tweet: "Newsflash @WhoopiGoldberg 6 million of us were gassed, starved and massacred because we were deemed an inferior race by the Nazis. How dare you minimize our trauma and suffering!"

Anti-Defamation League CEO Jonathan Greenblatt tweeted: "No @WhoopiGoldberg, the #Holocaust was about the Nazi's systematic annihilation of the Jewish people – who they deemed to be an inferior race. They dehumanized them and used this racist propaganda to justify slaughtering 6 million Jews. Holocaust distortion is dangerous. #ENOUGH."

A day later, Goldberg issued an on-air apology for her comments and reiterated it on "The Late Show With Stephen Colbert."

"Yesterday on the show I misspoke," Goldberg said, per The Hollywood Reporter. "[The Holocaust] is indeed about race, because Hitler and the Nazis considered the Jews to be an inferior race. Now, words matter, and mine are no exception. I regret my comments and I stand corrected. I also stand with the Jewish people."

While Goldberg was backtracking, her former co-host Meghan McCain made sure to chime in, although she didn't initially name-check her former co-host but tweeted, "Antisemitism is a cancer and a poison that is increasingly excused in our culture and television – and permeates spaces that should shock us all."

That restraint was short-lived, because McCain then followed with another tweet: "I hate commenting on my old employer because I have moved [on] in every way a person can move on. That being said I am an activist against antisemitism and it is a big part of my life. The growing threat is real and virulent and everywhere. I am heartbroken about what was said."

She also helpfully shared on Instagram an award she received for her activism.

McCain was so upset by the whole incident that she even penned a Daily Mail column to refute the harmful comments and misconceptionns about the Holocaust. She makes many important and salient points, especially about the long history of antisemitism and how the horrors and lessons of the Holocaust shouldn't be buried.

RELATED: How Meghan McCain changed "The View" and how "The View" changed politics on TV

But along with sharing horrifying stats and decrying antisemitism, the column can't help to show that she's bitter about her time on "The View." Despite her protest that, "The show doesn't define me like it has so many other people who have worked there over the years, and I have found liberation and satisfaction in my career working here at DailyMail.com," she then continues to go on at length about the double standard about liberals and conservatives on TV, and other errors Goldberg and ABC News has made in the past.

Instead of half-assed apologies and bringing in experts in the antisemitism space, maybe dedicate an entire 'Hot Topics' segment to discussing why what was said was so deeply offensive and dangerous.

In the world of media, there are people who will never face the same ramifications and repercussions that others will.

There's a double, triple, and even quadruple standard if you are conservative.

Whether McCain's column had its effect on ABC or not, only the network knows.

Race, as Goldberg has learned, is not merely a skin color but a social construct in which identity is assigned to categorize people. While certain physical characteristics can contribute to that concept, social practices like religion are also used to divide and often demonize people.

Goldberg issued a written apology on social media, acknowledging her inflammatory comments and offering support to the Jewish community.

"The Jewish people around the world have always had my support and that will never waiver," she wrote. "I'm sorry for the hurt that I have caused."

During her interview on "The Late Show," Goldberg reiterated her apology, but it's clear that her concept of race still needs examination.

"It upset a lot of people, which was never ever, ever my intention," she said. "I feel, being Black, when we talk about race, it's a very different thing to me. So I said I thought the Holocaust wasn't about race. And people got very angry and still are angry.

"But I thought it was a salient discussion because as a Black person I think of race as being something that I can see," Goldberg continued. "So I see you and I know what race you are. I thought it was more about man's inhumanity to man . . . I felt differently. I respect everything everyone is saying to me."

When Colbert asked if Goldberg understood that the Nazis regarded the genocide of Jews as a racial issue, she responded that "the Nazis lied" and "had issues with ethnicity not with race." Goldberg once again pointed out that both the Nazis and European Jews were groups of white people.

"Don't write me anymore, I know how you feel," she added. "I'll take your word for it and never bring it up again."