The duo is believed to be only 300 years old, scarcely older than the republic 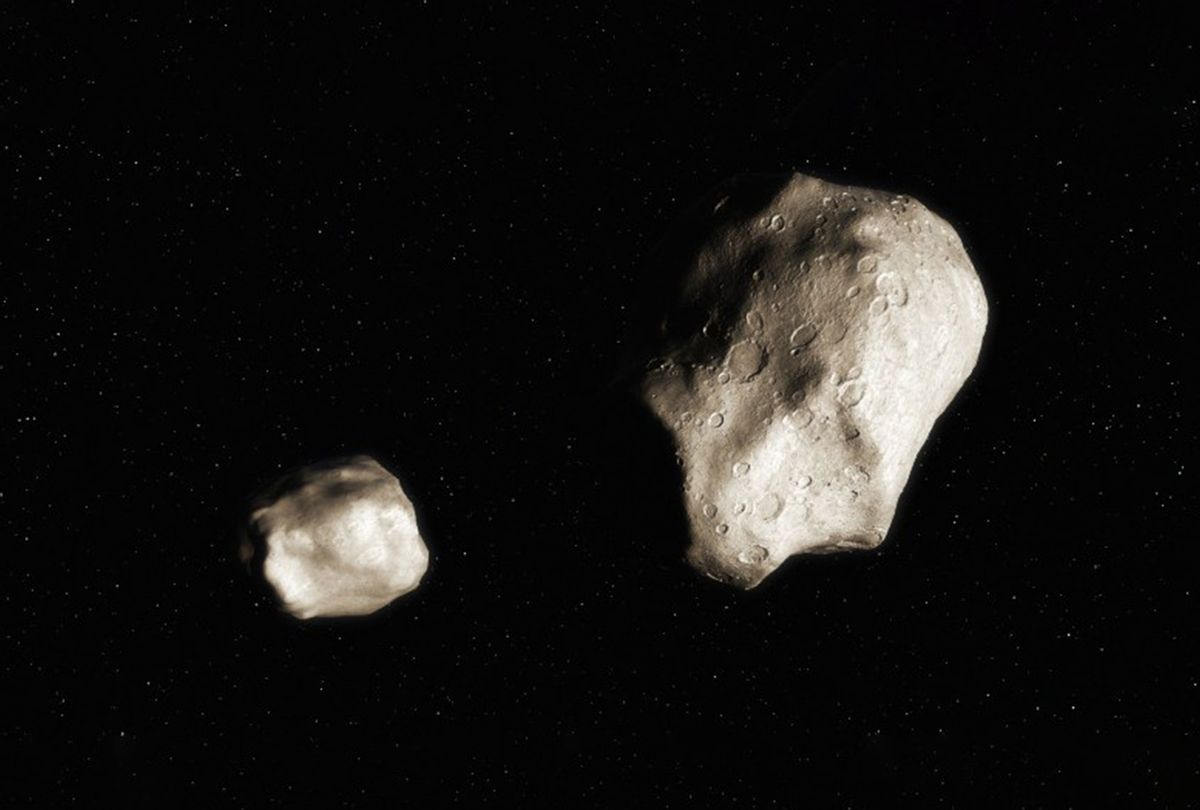 Artist rendition of an asteroid pair, shortly after separation. Over millennia these objects will drift apart and become harder to identify. At 300 years old, the asteroid pair 2019 PR2 and 2019 QR6 are the youngest found to date. (UC Berkeley/SETI Institute)
--

When Benjamin Franklin was a teenager in British America, penning letters to the editor to his local paper, two asteroids in our solar system split apart — unbeknownst to him, or any human.

This year, these "twin" asteroids, remarkable for their youth compared to most of the bodies in the solar system, were observed orbiting the Sun near Earth. A team of international astronomers announced the discovery, noting that they are the youngest "asteroid pair" known to scientists to date. Astronomers believe these twin asteroids originated from the same body, yet still retain the same orbit and still drift near each other.

The details of the discovery are detailed in a paper published on February 2, 2022, in Monthly Notices of the Royal Astronomical Society.

Astronomers believe the pair of asteroids split off from their parent body a mere 300 years ago, which is extraordinarily recent in the history of our solar system. Many asteroids have been drifting in the cold of space for millions or even billions of years without exhibiting any geologic change.

"It's very exciting to find such a young asteroid pair that was formed only about 300 years ago, which was like this morning — not even yesterday — in astronomical timescales," said Petr Fatka of the Astronomical Institute of the Czech Academy of Sciences, who led the team that confirmed the two asteroids were indeed a pair separated from their parents.

Data that led to the discovery started streaming in back in 2018, when scientists using the Pan-STARRS1 survey telescope in Hawaii and the Catalina Sky Survey in Arizona each discovered a single near-earth asteroid (NEAs), which at the time were dubbed 2019 PR2 and 2019 QR6 respectively. The larger one of the two was about one kilometer in diameter, or a little over half a mile long. The second asteroid is half the size of the bigger one; both appeared to have very similar orbits around the Sun.

Scientists confirmed their observations with several other telescopes, such as  Lowell Discovery Telescope (LDT) in northern Arizona. Follow-up observations revealed that these two NEAs shared very similar properties which could not be dismissed as mere coincidence.

"Thanks to the measurements performed with the LDT, it is clear that 2019 PR2 and 2019 QR6 come from the same parent object and their high orbital similarity is not coincidental," Fatka said.

Scientists went on to hypothesize that the pair likely formed by a rotational fission, which is when a spinning asteroid reaches such a high speed that pieces of debris fly off and form new bodies of their own. When this happens, these new asteroids usually maintain similar orbits as their parents did — which is the case with the newly discovered pair. The scientists proceeded to use specific modeling techniques and made additional observations by looking at the Catalina Sky Survey from 14 years before the discovery; working backwards, they were able to determine that this separation happened 300 years ago.

However, the young age of the pair made it difficult for scientists to reconcile specific properties of the asteroids. Indeed, young asteroids have been discovered before — but "young" can also mean around 7 million years old. Asteroids by nature are ancient pieces of space rubble, many of them remnants leftover from the early formation of our solar system billions of years ago. Most of the asteroids orbiting our Sun between Mars and Jupiter within the main asteroid belt are believed to be around that age.

After observing the congruence between the two asteroids, scientists went back to the drawing board. At first, they theorized that the original body from which they came could have been a comet. Perhaps a comet's gas jets pushed these asteroids' orbits into the configuration seen today. Though plausible, scientists were unconvinced it fit with what they observed.

"In the present day, the bodies don't display any signs of cometary activity," said Nicholas Moskovitz of Lowell Observatory. "So it remains a mystery how these objects could have gone from a single parent body, to individually active objects, to the inactive pair we see today in just 300 years."

More observations are needed to determine how these young twins ended up like this — but unfortunately, we're going to have to wait more than 10 years until they pass near Earth again.

"To have a better idea about what process caused the disruption of the parent body, we have to wait until 2033 when both objects will be within the reach of our telescopes again," Moskovitz said.