How Beijing manufactured winter for the 2022 Olympics 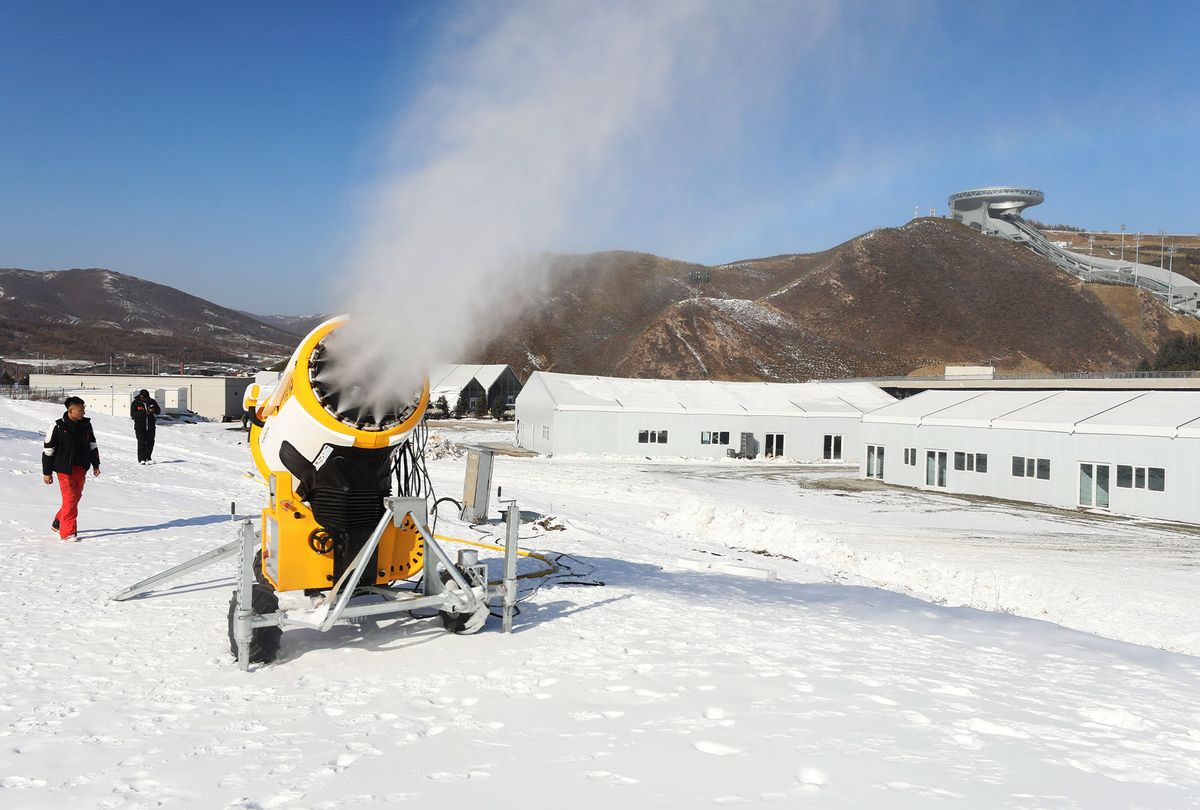 A snowmaking machine works at the National Cross-Country Skiing Centre, a venue for the cross-country skiing and Nordic combined events of Beijing 2022 Winter Olympics, on November 15, 2021 in Zhangjiakou, Hebei Province of China. (Wu Diansen/VCG via Getty Images)
--

Rising from the cooling towers of an abandoned steel mill sits Shougang Park, the venue for Big Air freestyle skiing and snowboarding events in the Beijing Winter Olympics. Nestled in the heart of downtown Beijing, the site of China's first state-owned steel mill no longer fabricates steel, but manufactures snow instead — crucial for a venue where there is little natural snowfall.

Nearly 100 percent of the snow at the 2022 Winter Olympics is artificial, but the move toward fake snow to provide for winter sports is not new. The shift is part of a decades-long trend, for which human-influenced climate change is to blame. Since 1950, February temperatures in the last 19 cities to host the Winter Olympics have increased by a mean of 4.8º Fahrenheit, according to an analysis by Climate Central. In the same period, Beijing warmed by an average of 9º F.

Sole reliance on machines to produce snow for the Olympic Games is a first, but likely won't be the last given Earth's warming climate. Artificial snow has been used consistently in competitive winter sports for many years now at ski resorts and sporting venues alike.

"This is nothing new. Already in the past, I would say five to 10 years, we have been skiing only on man-made snow," said Bernhard Russi, chair of the International Ski Federation's alpine committee, in a press conference.

"It's also very widely used for leisure winter sports as we know, we practice winter sports ourselves,"  Marie Sallois, the International Olympic Committee's director of corporate and sustainable development, told Reuters. "The Winter Olympic Games, it's no exception. What is really important, like for any other activities that we practice, is to try to do it in the most efficient way, and this is what I believe Beijing 2022 is trying to achieve."

The International Olympic Committee stands by the decision to host the games in Beijing despite its arid climate and low snowfall. Yet reliable conditions for winter sports have become increasingly rare. Beijing is not unique in this regard: a recent study from the University of Waterloo projected that by the 2080s, few previous host cities would be able to provide reliably fair and safe conditions, as defined by approximately 350 Olympic athletes and coaches from around the world, for outdoor sports in a high-emissions scenario of climate change.

"The geography of the [Olympic Winter Games] changes radically if global emissions remain on the trajectory of the last two decades, leaving only one reliable host city by the end of the century," the report states. "Athletes expressed trepidation over the future of their sport and the need for the sporting world to be a powerful force to inspire and accelerate climate action."

Although Shougang Park is the first permanent Big Air venue in the world, it is one of very few new structures built for the 2022 Beijing Olympics. In accordance with international climate reduction goals, the IOC committed to a 100 percent carbon-neutral Olympics. Reusing old structures is one aspect of the overall plan of energy reduction and carbon offsetting.

"To face a future without these sports is challenging, but it's equally challenging to wrestle with the massive environmental footprint that our sport can have, from the emissions involved in getting to the mountain, to snowmaking, and the energy involved in operating lifts and lights and all the rest," Madeline Orr, founder of the Sport Ecology Group and a lecturer at  Loughborough University London, told Vox. "That said, I have full confidence the industry and snow sports community will find ways to continue innovating on this issue and finding ways to adapt, because snow sports are central to our culture."

Yet as the 2010 Vancouver Olympics demonstrated when trucks and helicopters had to transport snow from higher elevations to the competition venues, fake snow is not a viable alternative in a high-emissions scenario. The reason is simple: snow guns can only imitate precipitation. They do so by blowing water through giant fans to disperse water droplets that freeze in cold air. The operative word is cold. What these machines are unable to do is manufacture sub-freezing temperatures necessary for snow. If they could, there would be no need to worry about climate change ruining future Olympics Winter Games.

Read more on the future of snow: