The Alps' surprising salmon-tinted landscape is dismal news for Earth. Here's why 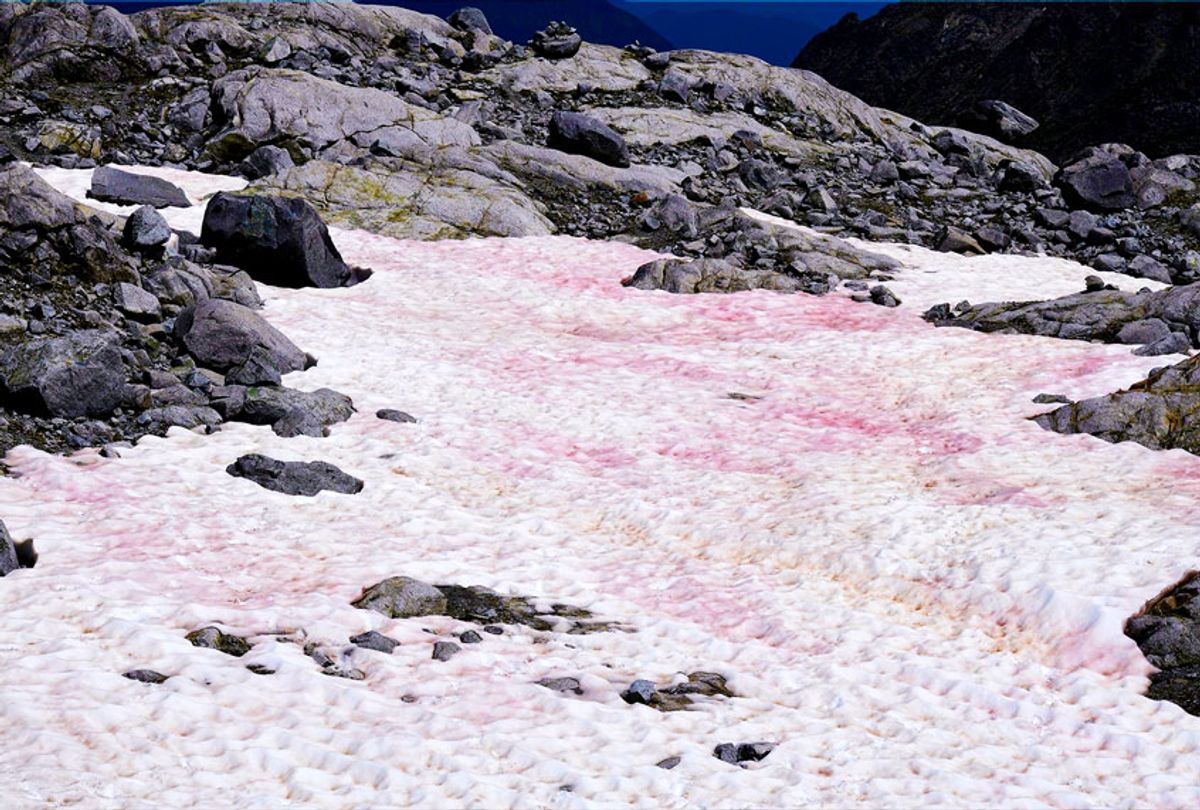 A picture taken on July 4, 2020 on the top of the Presena glacier near Pellizzano shows pink colored snow. - The pink color of the snow is supposedly due to the presence of colonies of algae of the species Ancylonela nordenskioeldii from Greenland. (MIGUEL MEDINA/AFP via Getty Images)
--

A bizarre bout of so-called "watermelon snow" in the Alps this year certainly looks picturesque. Unfortunately, the salmon-tinted landscape is actually a bad omen for Earth's climate.

Watermelon snow, which takes on a reddish-pink hue, is caused by snow algae. While most fresh-water algae thrive in warmer temperatures, watermelon snow is cryophillic, meaning the organisms thrive in cold temperatures. The algae is red because of its carotenoid pigment.

The scientific concern over the algae's growing presence in the Alps arises because the red color increases sunlight absorption into the snows — meaning they will melt earlier and thereby exacerbate the impact of climate change. Biagio Di Mauro, a researcher at the Institute of Polar Sciences at Italy's National Research Council, explained to Earther that the algae blooms in question here are Chlamydomonas nivalis, which is found not only in the Alps but also in both polar regions, including Greenland and the Antarctic.

"A classic reminder of how uncertainty is not our friend," Dr. Michael E. Mann, a distinguished professor of atmospheric science at Penn State University, told Salon by email. "In this case, we're seeing an amplifying feedback wherein biological darkening (due to Algae growing on the surface of melting ice), leads to more solar absorption by the ice and even faster melting. We call this a 'positive feedback' but it is anything but positive. It reflects a process which is leading to faster melting of the glaciers than our simple models predict."

Ken Caldeira, an atmospheric scientist at the Carnegie Institution for Science's Department of Global Ecology, expressed a similar thought by email, commenting that "photosynthetic organisms are designed to absorb sunlight. Some small fraction of the energy in sunlight goes into making carbohydrates but most of it goes into heating the organism and its local environment. If that organism is living in snow, the snow is likely to melt."

He also described how he and other scientists wanted to experiment on how black carbon influences snow melt rates, but had to abandon the project because experiments are difficult to do.

"You need a bunch of control plots and a bunch of experimental plots, and you need the plots and the snow on them to be as uniform as possible, and then you need to be uniform in spreading the particles on the snow," Caldeira told Salon. "And they need similar light and temperature conditions, etc. Then you have to measure many things: amount of incoming light, amount of reflected light, amount of melt, snow temperature, air temperature, etc. There are surprisingly few experiments that have done all of this."

Kevin Trenberth, a distinguished senior scientist in the Climate Analysis Section at the National Center for Atmospheric Research, referred to his own research among penguin colonies in Antarctica.

"I was amazed when I went down there at all the pink colored snowed resulting from hundreds of thousands of penguins guano," Trenberth explained. "The pink certainly changes the albedo (reflectivity). Nor is this source or the algae source unique. Dust in the northern hemisphere deposited on Greenland and ice also lowers the albedo and likely contributes to faster melting. This is a very tiny effect overall though, but it sure does not help."

This is not the first time that climate change has seemed to be connected to changes in the color of the snow. In May, researchers from the University of Cambridge and the British Antarctic Survey found that green snow algae is turning much of the snow in Antarctica green.