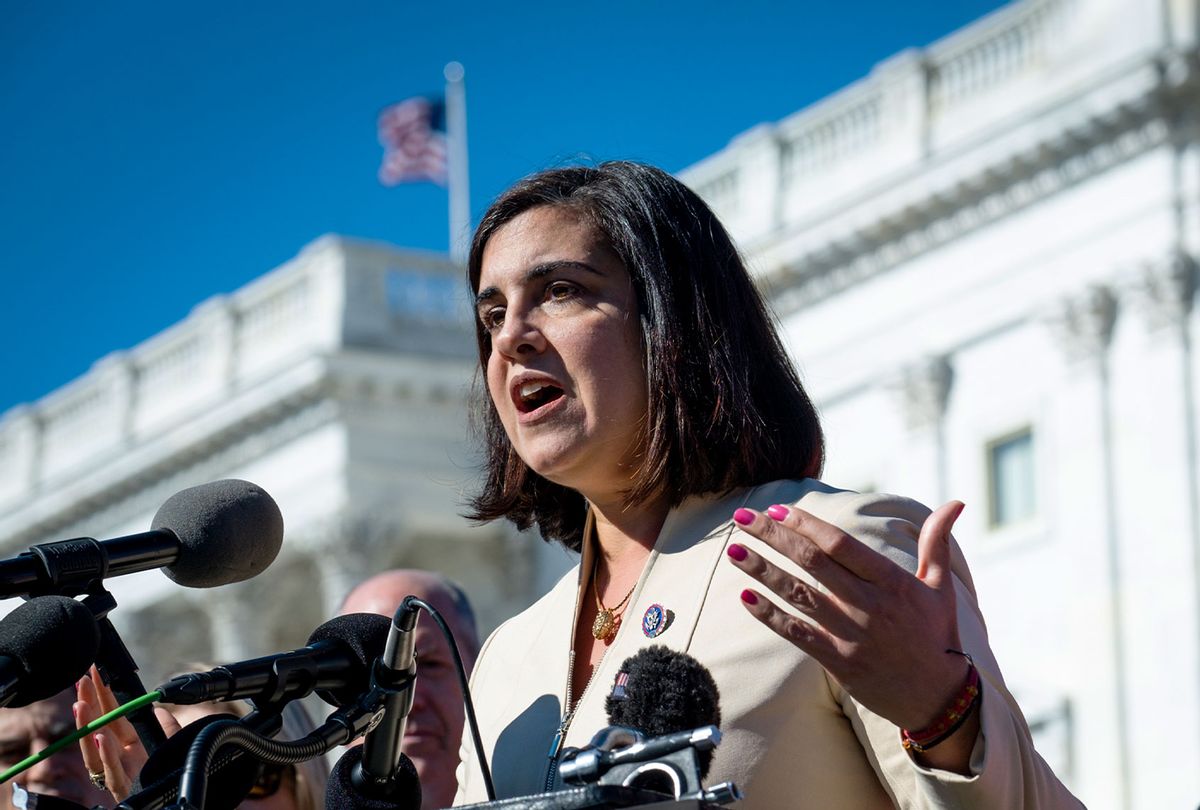 After years of unilaterally drawing Democrats out of their seats, Republicans are suddenly shocked and outraged by partisan gerrymandering now that New York's state legislature has approved a new congressional map, which is expected to give Democrats an advantage in 22 of the state's 26 congressional seats.

New York Gov. Kathy Hochul last week signed into law a new congressional map that could net Democrats an additional three congressional seats, while costing the Republicans four — since New York lost a seat as a result of the 2020 census. The map is one of the most aggressive gerrymanders of the cycle, which Democrats hope will help offset expected Republican gains in states like Texas, Florida and Georgia. Redistricting analyst Dave Wasserman of the Cook Political Report said the New York map was "probably the biggest shift in the country," giving national Democrats their first redistricting edge over the GOP this cycle. Though Republicans were expected to extend their redistricting advantage after an ultra-aggressive 2010-11 cycle, the New York map is "so skewed toward Democrats that it could single-handedly change that," wrote FiveThirtyEight's Nathaniel Rakich.

The new map would make it far more difficult for two New York Republican incumbents, Reps. Nicole Malliotakis and Claudia Tenney, to win re-election this year after their districts were redrawn to include more Democratic-leaning areas. Malliotakis, whose current district largely consists of Staten Island, by far the most Republican borough of New York City, accused Democrats of ignoring the "will of the people" and trying to "take away the voice" of conservatives in her district.

RELATED: The decade Republicans hijacked our democracy, via the gerrymander

Republicans have also criticized the new S-shaped boundary of longtime Democratic Rep. Jerry Nadler's district, which stretches 15 miles through two boroughs, 15 State Assembly districts and New York Harbor — labeling it a "jerrymander." Although Nadler, a 15-term incumbent, faces no realistic threat in his re-election campaign, his redrawn district shores up neighboring seats for other Democrats. Nadler disputes that the district was changed drastically, saying it has had similar boundaries for years.

"We're taking a map that over decades has been gerrymandered to benefit Republicans and make it fair," he said in an interview. "That doesn't make it a gerrymander, that just makes it fair. So we can't compare this to what currently exists because that is the result of built-in unfairness."

Gianaris, who has slammed Republican gerrymandering in the past, disputed that the map was unfairly skewed toward Democrats, arguing that the map complies with constitutional requirements and that "voters have a way of making their own decisions" of who will represent them.

Redistricting, particularly when conducted by state legislatures, has long been criticized for allowing lawmakers to choose their voters instead of the other way around. In this case, some Democrats wanted the New York legislature to go even further. Rep. Sean Patrick Maloney, D-N.Y., who chairs the Democratic Congressional Campaign Committee, pushed for the Democratic-dominated legislature to draw a map giving Democrats 23 seats. The map they drew is likely to give their party a pronounced advantage in 22 of the state's 26 districts, which would effectively give 84% of the seats in a state President Biden carried with 61% of the vote.

"It's a very carefully constructed aggressive gerrymander and clearly is designed to take out a number of Republican incumbents," said Michael Li, senior counsel for the Democracy Program at New York University's Brennan Center for Justice. "But it's also very carefully designed to give Democrats arguments in defending it."

"These maps are the most brazen and outrageous attempt at rigging the election to keep Nancy Pelosi as speaker," he said in a statement. "Voters spoke loud and clear in rejecting their partisan power grab last year and in 2014, but Democrats are circumventing the will of the people. They can't win on the merits so they're trying to win the election in a smoke-filled room rather than a ballot box."

"All of those Republicans who would like to decry partisan gerrymandering, I didn't see many of them vote to put an end to it when they had the opportunity," Daley said. "If Republicans wanted to put an end to this," it would only have taken two U.S. senators to enact that bill, "and that didn't happen."

After Democrats spent years fighting against partisan gerrymanders, Daley said, the aggressive New York map is the result of an "inevitable arms race" caused by aggressive Republican gerrymanders over the last decade that have tilted state legislatures and congressional delegations to their advantage.

"Democrats have worked, I think, honestly and honorably to try to defuse this arms race," he said. "This case is the inevitable result of a decade of Republican cheating and unfair play," he added.

Li agreed that the New York map was effectively "karma" for Republicans, who have pushed partisan gerrymanders for decades. The Republican position is a major turnaround from where the party stood in the 1980s and '90s, when Democrats had controlled the House for most of the preceding four decades. Sen. Mitch McConnell, R-Ky., now the Senate minority leader, and other Republicans backed a bill in 1989 that would have outlawed partisan gerrymandering. But a new breed of Republicans took over the House in the '90s and increasingly began to focus on aggressive redistricting to shift the balance of power. After Barack Obama's election, Republicans used a wave of victories in state legislative races to carve up congressional and legislative maps to give themselves disproportionate power.

If Republicans had supported the Freedom to Vote Act, New York's map would have been immediately struck down by the courts.

"It's amazing to me that some of the Republicans who have been jumping up and down crying foul actually could have done something about it by voting for the Freedom to Vote Act," Li said. "But you got no Republican votes in either house."

The new map was drawn by New York's legislature, where Democrats hold supermajorities in both chambers, after the failure of a bipartisan redistricting commission approved by voters in 2014. Unlike other states that have created independent commissions to draw new maps, the New York commission only has the power to make non-binding recommendations to the state legislature, which can draw its own maps if it twice rejects the commission's proposals. The supposedly bipartisan commission quickly grew overtly partisan, with Democratic and Republican members recommending different maps that were both voted down by the legislature. The commission did not even submit any maps during the second round, with both sides accusing the other of acting in bad faith. Democratic leaders then rushed out their maps without public hearings and with only days notice to members.

New York's foray into redistricting reform failed because the commission members were appointed by lawmakers, which inevitably injects politics into the process, Li said.

"States that created a truly independent process, like Michigan and Colorado and California, have good maps, both from the standpoint of partisan fairness but also from the standpoint of racial fairness," he said. "I think that in some ways the system in New York was designed to default to the legislature," he added.

Daley agreed: "It's pretty clear that New York Democrats never had any intention of making that commission work."

"They had pretty clear designs all along on forcing that commission into deadlock and pushing the maps into the legislature," he said. "You can argue fairly and honestly that the Democratic lawmakers in New York abused the spirit of the independent commission approved by voters in almost the exact same way that Republicans did in Ohio."

It remains to be seen whether courts will uphold the new map. The Supreme Court in 2019 ruled that federal courts had no jurisdiction over partisan gerrymanders, leaving such litigation to state courts. State courts in North Carolina and Ohio have already struck down Republican-drawn maps because they were blatantly partisan.

This time the shoe is on the other foot, with a Republican-led lawsuit challenging the New York districts as unconstitutional. The lawsuit claims that Democrats "brazenly enacted a congressional map that is undeniably politically gerrymandered in their party's favor" and asks a state court to throw out the map because it is an "an obviously unconstitutional partisan and incumbent-protection gerrymander."

The New York constitution differs from those in Ohio and North Carolina, however, which have more specific criteria for district maps.

"The simple fact that a map is biased is not enough to strike it down" in New York, Li said, noting that the plaintiffs would have to show that the result was intentional. Democrats have sought to preempt those arguments by rolling out a long memo ahead of the map vote detailing neutral reasons for the district boundaries.

New York courts are also different, and no legislative redistricting plan has been rejected in the Empire State in more than 50 years, said Jeff Wice, a law professor and senior fellow of the New York Census and Redistricting Institute at New York Law School.

"The plaintiffs in the lawsuit started out with an uphill battle and have to prove that the plan violated the state constitution beyond a reasonable doubt," he said. "And then, if they can reach that bar, they have to show the legislature acted in bad faith. So it's difficult."

Wice noted that the state legislature can argue that it met population equality requirements and other criteria relating to keeping together "communities of interest" as justification for the partisan outcome.

Li said it will be hard to justify some of the boundaries, such as in  Malliotakis' carved-up New York City district, but Democrats drew the lines knowing the criteria they needed to meet, and it's not likely a court can resolve the suit before party primaries begin in March.

Gianaris, the gerrymander-hater-turned-gerrymander-defender, said that Democrats consulted with lawyers at every step of the process to ensure that they complied with state law.

"I believe that everything we have done is in strict compliance with the legal requirements," he said. "Our lawyers believe that we've been very careful. Every district we've drawn has a reason it was drawn the way it was, based on the law, and I'm confident that the courts will find that as well."

Read more on redistricting and gerrymandering: