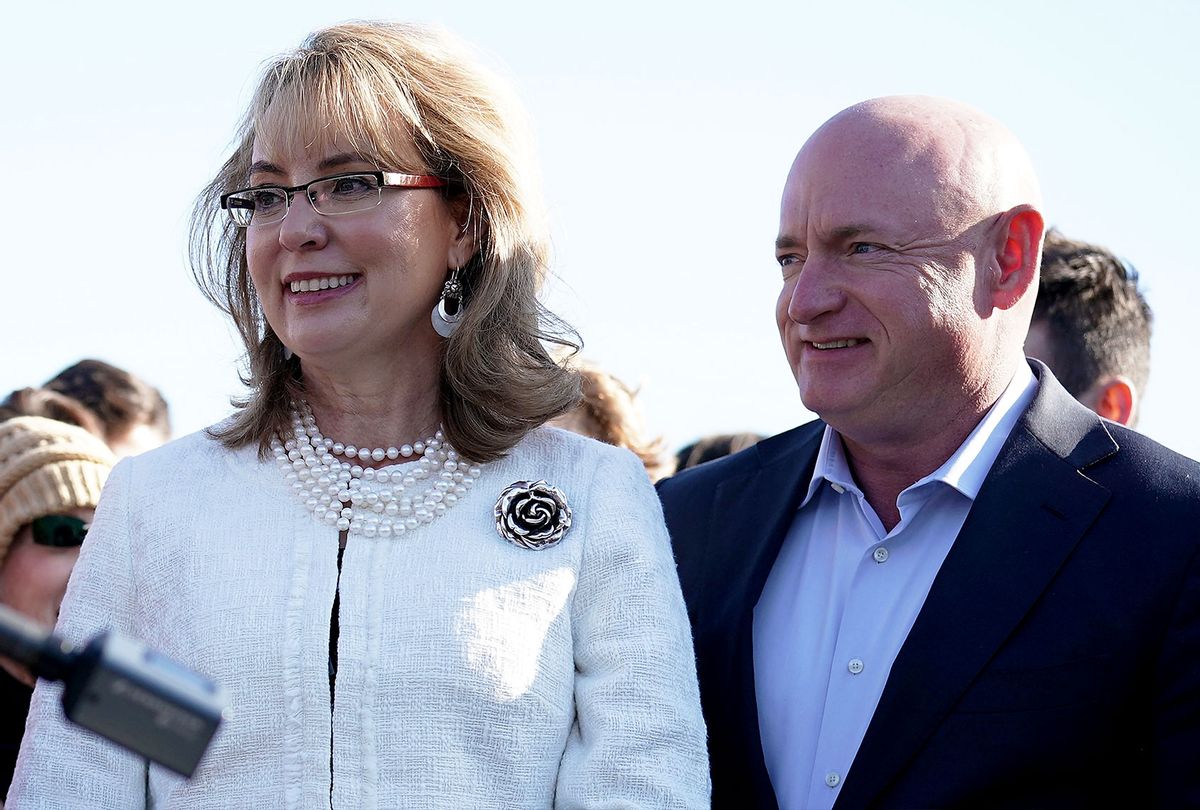 Arizona Republican Senate candidate Jim Lamon's Super Bowl ad shows him in a shootout with President Joe Biden, House Speaker Nancy Pelosi and Sen. Mark Kelly, D-Ariz., whose wife, former Rep. Gabby Giffords, was shot in the head and critically injured in an assassination attempt more than a decade ago.

Lamon posted the ad on Twitter, showing him dressed as an Old West sheriff coming to rescue a town from "Old Joe," "Crazyface Pelosi" and "Shifty Kelly."

"The good people of Arizona have had enough of you. It's time for a showdown," Lamon says, before shooting weapons out of the Democratic characters' hands.

Kelly, who is running for a full term after winning a 2020 special election to fill the seat of the late Sen. John McCain, R-Ariz., is married to Giffords, a Democratic congresswoman who suffered a severe brain injury when she was wounded in a 2011 mass shooting in Tucson that also killed six people and injured many others.

Lamon's campaign is spending "multiples of six figures" on the ad, which is expected to air on NBC in Tucson during the Super Bowl, according to the Washington Post. The campaign has raised just $600,000 from individual donors while Lamon, the founder of a solar energy company he recently sold to Koch Industries, has spent $10 million of his own money on his bid and vowed to spend $50 million by Election Day.

"You owe Gabby & @CaptMarkKelly an apology," he tweeted.

"Absurd and desperate," Republican Senate candidate Blake Masters said in a statement to The Arizona Republic. "Fits his campaign."

"Real violence and use of deadly force is no laughing matter," he said. "Violence in America is real and it isn't funny. This ad shows poor judgment and isn't reflective of the values of the Second Amendment. This ad will do more to boost Mark Kelly's fundraising than help Republicans."

"When a member uses his or her national platform to encourage violence, tragically, people listen," House Speaker Nancy Pelosi said at the time, warning that "depictions of violence can foment actual violence, as witnessed by this chamber on Jan. 6, 2021."

Lamon dismissed the outrage over his ad, vowing, "I won't be backing down."

"Left wing snowflakes can't stand the fact that, for once, AZ will have a Senator who will shoot straight with them & stop cowering to Biden," he tweeted. "Their feigned outrage over our new Super Bowl ad came right on cue."

"Once again, the Big Tech Oligarchs are interfering in elections and censoring conservatives," Lamon tweeted in response to the decision, adding the hashtag "#LetsGoBrandon."

Lamon also recently came under fire for falsely claiming to be an Arizona elector during Trump's crusade to overturn his election loss. Lamon was one of 11 Arizona Republicans who signed a document falsely certifying the state's electoral votes for Trump. The signatories claimed that they were the state's "duly elected and qualified electors," which was obviously untrue. The House committee investigating the deadly Jan. 6 Capitol riot recently issued subpoenas to 14 fake electors involved in the scheme.

Lamon told Vice News last month that the committee has not contacted him. but said he would be willing to cooperate with their investigation.