The dark side of Joel on "The Marvelous Mrs. Maisel" 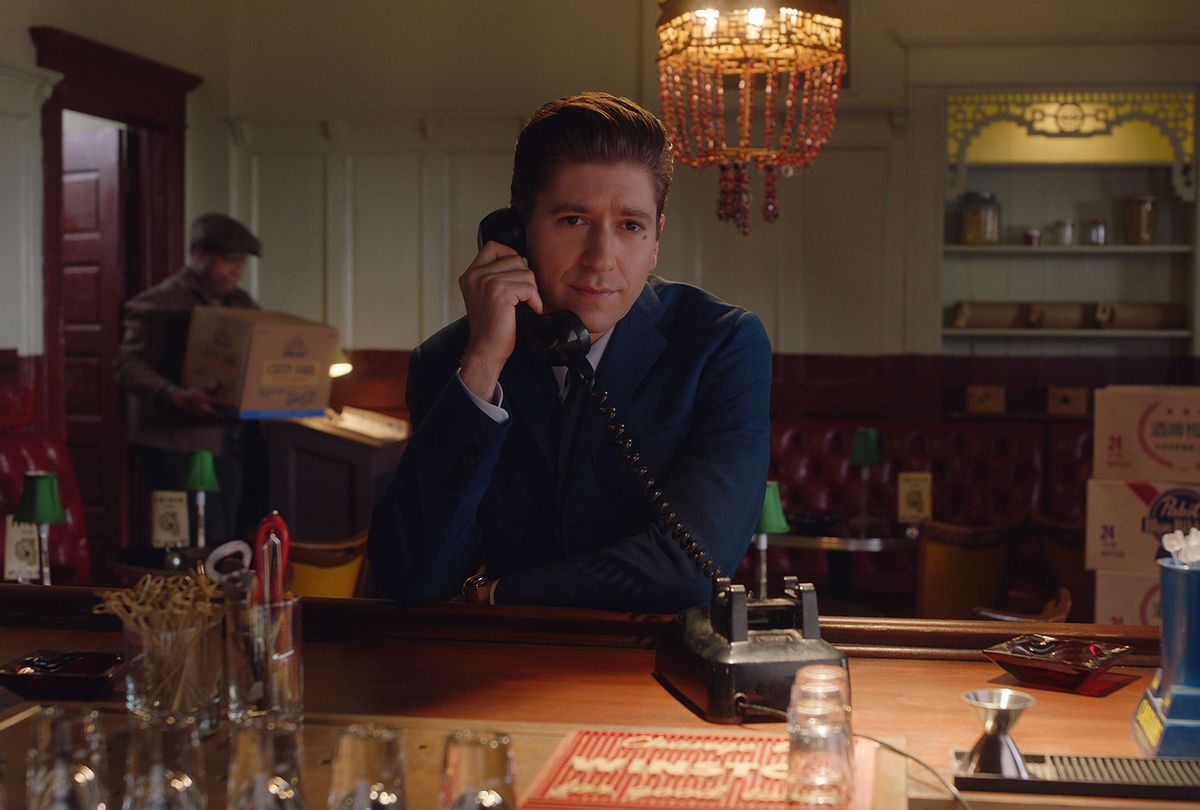 For a long time, I considered Nellie Oleson to be the worst person in the world.

I was raised on a steady diet of "Little House on the Prairie." On summer vacation, when I was in junior high, I would watch one hour of the show at 10 a.m. when I rolled out of bed, then switch to another broadcast network where a whole other hour of the historical drama was on at 11.

The bratty rich girl of "Little House," Nellie Oleson was the ideal foil for the main character. She had perfect blond ringlets, the finest fancy clothes and frequently a snide expression, mouth turned down and nose turned up. The actor who played Nellie, Alison Arngrim — though by all means, a fine person in real life, one of the first celebrities to support AIDS charities and an advocate for abused children — had difficulty escaping her villain role. Once, someone threw a drink at her head when she was in a Christmas parade. Arngrim's book about her time playing Nellie is titled "Confessions of a Prairie Bitch: How I Survived Nellie Oleson and Learned to Love Being Hated."

In recent years, a new character has emerged to de-throne Nellie, a contender for worst person on television, certainly the most mediocre: Joel Maisel.

The Amazon prime show "The Marvelous Mrs. Maisel" follows its titular character, Midge Maisel (Rachel Brosnahan), a former housewife in New York City in the late 1950s, who struggles to establish a career as a standup comic — and to wrest control of her life. One of the reasons for her struggle is her on and off again husband, Joel (Michael Zegen).

In the very first episode of the show, Joel leaves Midge, seemingly out of nowhere, after he bombs onstage at a Village nightclub called the Gaslight, attempting a comedy set, which Midge thought he was doing just for fun. It turns out Joel really believes he can be a famous, professional standup comic (spoiler alert: he cannot). After the couple fight, he packs up his clothes in her suitcase and admits he's been having an affair for months with his secretary.

A common trait of the mediocre guy? He's got someone always on deck.

Entering its fourth season, the show finds the characters in completely different places in their lives. Midge has had some success in her own fledging comedy career, which then plummets after she makes a terrible mistake on stage. Joel has his own life, kind of. But while both characters have difficulties, Joel's are demonstratively less difficult. He slides by. He always has.

In 2021, the New York Times ran a story headlined " 'Mediocre' men get ahead in finance more easily, say women in the industry." (They put mediocre in quotation marks, possibly to not scare anyone.) In the article, the women interviewed report that men "could survive more easily than women with comparable abilities" in the world of finance. Men belong to clubs, after all. Men are "always around" while women lose years of work to caregiving.

With his ability to fall up, Joel is the quintessential mediocre man. But his lack of care and casual ease through life conceal darker qualities, his ineffectiveness masking toxic behavior that borders on abuse, particularly to the women in his life, whom he believes are beneath him.

Joel is not good at his jobs. Yes, jobs plural. A benefiter of nepotism, Joel begins the show employed by his uncle's plastics company, perhaps having followed the advice given to Benjamin Braddock in "The Graduate." During a big, important meeting, Joel quits that job in an emotional tantrum. He next works for his parents' garment business. His own father attempts to fire him, hoping he'll move on.

Joel is indecisive and never satisfied. At first, Joel is cheating on his wife with his secretary. Then, he betrays his secretary with his wife. He dates a series of women, including models at his family's garment factory. He has a one-night stand with Midge, more than once. Midge discovers he's living with the secretary girlfriend only when she drops the kids off, and sees the arrangement of his apartment is nearly identical to the one she and Joel shared (but with the nice new couch he refused to buy her). A stereotype of the estranged dad, Joel has slipped into the same life as he had with his family, only with a younger woman.

Soon after divorcing her, he drunkenly remarries Midge while he's seeing someone else at the time: Mei (Stephanie Hsu), who's been helping Joel navigate Chinatown. "This is my neighborhood now," he says like a pioneer gentrifier. Joel and Midge are (re)divorcing (I think? it's very unclear). Meanwhile, Joel and Mei have an argument, break up, then get back together.

In a Trump move, Joel's father has given him $60,000, and Joel has opened a Chinatown nightclub. This proximity to access — if I can't be a comedian, I'll control who can be on the stage — reminds me of the worst gatekeepers, those who seek power in part to restrict who else may have it. As Refinery29 put it: "This is how he will deal with not being "Midge funny." "

One wonders when Joel's comedy dream began. Perhaps he dreamed of being a famous poet first. Perhaps it's not the art form specifically, but delusions of grandeur, constantly believing he's better than he is. "I thought my life was going to be something different," he says when he leaves his wife. He says his dream is to be a comic — but it's a dream he doesn't work at, instead stealing his act from Bob Newhart. Midge is the one making copious notes about every show she attends, writing down and revising jokes, honing craft: actually doing the work.

When Midge goes on stage herself — and is really, really good at comedy, a natural — it's the ultimate betrayal for a man like Joel. He views it as a personal slight against him, an extension of how he views the whole world as out to get him.

Constantly blaming others and seeing oneself as a victim (even though Joel is the one who left Midge — and who introduced her to comedy in the first place) is a trait of a narcissist. So is being controlling.

Joel is furious when he first discovers Midge is not wearing her wedding ring — even though he uncovers this fact at a restaurant where he's dining with his live-in girlfriend at another table. He wants it both ways: The freedom to sleep with whoever he wants, and his estranged wife still attached to him, still dependent on him.

Money-wise, Joel's control is a clear example of financial abuse. He doesn't want Midge to work, and tries to buy an apartment for her and the kids—not out of the kindness of his heart, but because he wants her contained. Midge behaves cluelessly about money — in part, no doubt, due to the restrictive gender roles of the time, but also partly due to Joel.

Such ignorance finds Midge making terrible financial decisions at the start of the show's fourth season: buying back an apartment she can't actually afford, trying to buy groceries on credit she doesn't have, even stealing milk from the neighbors.

If Joel controls the purse strings, he controls his ex-wife.

Joel also seeks to control Midge's manager Susie (the marvelous Alex Borstein) by lending her money and keeping her indebted to him as well. Susie, as a person who's lived her whole life in poverty, has her own issues with money. "Don't you ever — I mean, ever — do something shifty with my wife's money again," Joel bullies her.

Joel feels threatened by Susie, the person to whom Midge is probably the closest, who believes in her and actually works to make Midge's dreams come true. Joel is also threatened by what Susie represents as a woman who wears pants, a woman who lives her life outside of men's approval and who embodies the kind of struggling artist life he can only fantasize about.

He frequently explodes at her in a kind of queer panic. "What's going on?" he says immediately when he sees Susie in her pajamas at Midge's apartment in episode 3 of season 4, after Susie has had particularly rough personal news.

Unlike Nellie Oleson — who has cult, gay icon status now — whose bad behavior still had lovable fun at its heart, over-the-top campiness, the character of Joel is a sneaky villain. There's nothing fun or funny about his behavior, nor is it childlike and immature like show co-creators Amy Sherman-Palladino and Daniel Palladino's other deadbeat dad character, Christopher from "Gilmore Girls."

Rather, it's deliberate and insidious, how Joel's charm conceals, how he seeks to harm.

Joel is the latest character in a long line of mediocre, threatened men drawn to the power of capable, talented women — until he realizes they're smarter than him, or more accomplished or have more potential. His power comes in squashing a woman like Midge's — a woman like Mei's — dreams, not in supporting them, and I hope, though I doubt it, this season shows both women leaving him backstage for good.