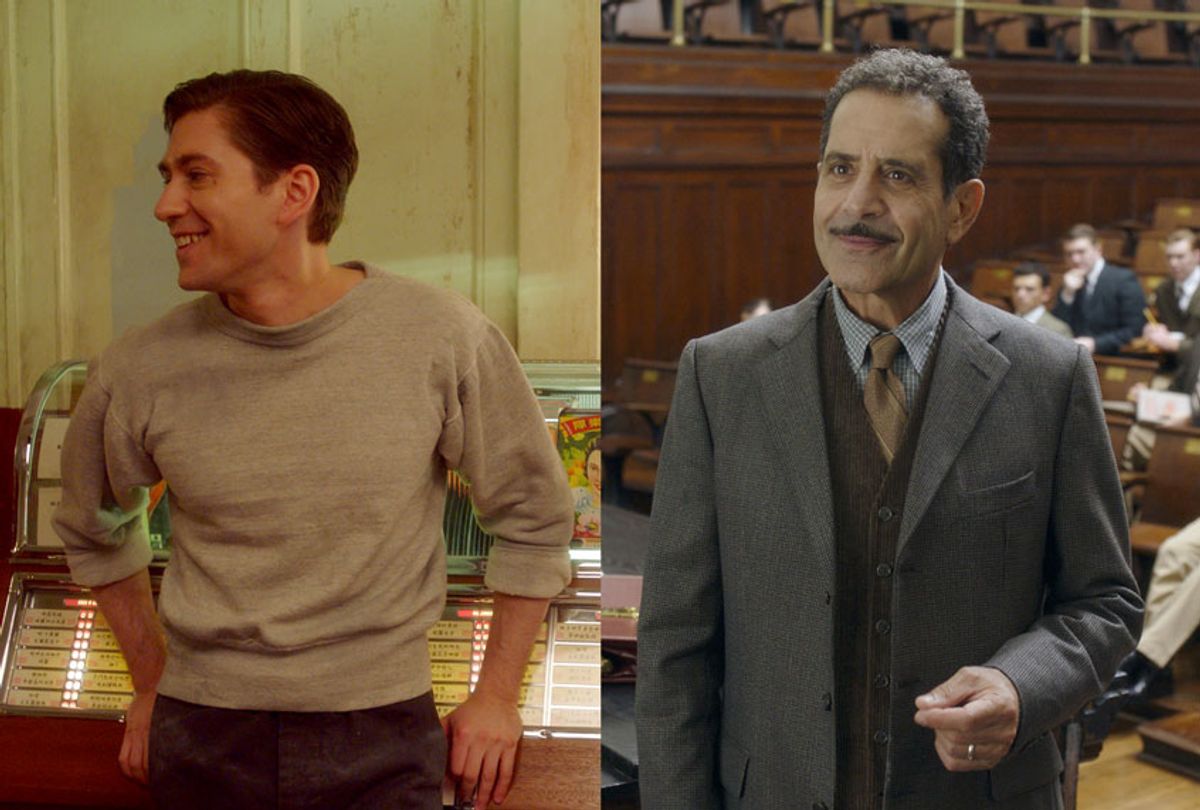 Joel and Abe from "The Marvelous Mrs. Maisel" (Amazon)
--

Spoilers ahead for Season 3 of “The Marvelous Mrs. Maisel.”

Amazon’s addictive “The Marvelous Mrs. Maisel” is unquestionably a show about women. Like creator Amy Sherman-Palladino’s previous series “Gilmore Girls” and “Bunheads,” the first clue is that female-centric title. The series has been a starmaker for Rachel Brosnahan, whose charismatic portrayal of a housewife turned standup comic is its vibrant anchor. But as Brosnahan observed during a recent episode of “Salon Talks,” when Midge “kind of blew up” everyone else’s lives by refusing to take back her wandering husband and striking out on her own, that blowing up has had a thrilling effect on the buttoned down men in her life.

Take her husband, please. The evolution of Joel Maisel has got to be one of the most charming twists in recent television. “I thought he was the antagonist,” actor Michael Zegen revealed during the cast’s press day earlier this month. And why wouldn’t he? In the very first episode, his character Joel Maisel is revealed to be an adulterer and — almost as shockingly — a joke stealer. Joel is a man who blames his wife Midge for his own creative failures; a man who walks out on his marriage and children.

“For all intents and purposes, he could have been a one-off. You could have seen him in that first episode and never seen him again,” Zegen notes. “He certainly was the catalyst. I thought he was going to be the villain.” But how boring and predictable would that have been? Instead, in Sherman-Palladino’s technicolor Eisenhower-era universe, men get to have a feminist awakening too. And never has that been a more joyful revelation than in the current season.

“In the first season, he’s waiting outside her apartment building and he says, ‘I’ve decided I’m going to give it another go,’ and she says no,” recalled Zegen. “When we filmed that, I told Rachel that people are going to hate him. I knew that and went with it.” Instead, Joel finds himself growing to appreciate his wife’s newfound abandonment of conventional expectations. “I was wrong,” he tells Salon. “I was completely wrong and I've continued to be surprised by him. I love that about it.”

In season three, it's now the infancy of the Sixties, and Joel has begun pursuing his own dream, launching a new nightclub. “I still don’t think he can really wrap his head around the fact that she’s succeeding at his dream,” says Zegen. “But her rise gives him this motivation to have a rise as well.” The path lands him in Chinatown, where suddenly “English speaking white guy” is not the default, and Joel grapples with an abrupt learning curve. He also gets a new love interest, Mei Lin (an effervescent Stephanie Hsu), a med student with an inside track on neighborhood protocol and a sharp confidence Joel finds irresistible. “You have a type,” his friend Archie tells him at one point, and Joel takes it as a compliment.

Of course, Joel still backslides into the man cave of egotism — he is encouraging of Mei’s professional ambitions but has a wounded tantrum when she greases the wheels for him to get his liquor license. But Joel this season is also a guy who’s truly trying. He gets in a physical fight with Archie to stop him from tumbling into the kind of casual infidelity that blighted his own marriage. He starts to  adapt to being a guest in another community’s world. He gamely trots off to Vegas to applaud his estranged wife  (a well-intentioned gesture that proves more complicated than either had wagered). And significantly, he steps up as a dad. The breakup has forced Joel to learn to co-parent, a concept that he, like many of his generation, never had to reckon with while the little woman was at home in front of the stove. He even shows up to his own divorce proceeding, “to support my wife,” an action so radical that the judge deadpans, “That’s very modern. It’s almost French.”

But the arc of history still has plenty of bending to do. Since “Maisel” debuted two years ago, a wealth of debate has arisen over Midge’s allegedly less than stellar mothering. Even when viewed by 21st century standards, the job of parenting is a considered almost exclusively a female one.

When asked point blank if he thinks Joel is a bad father, Zegen smiles and replies, “It's interesting that you asked, because Rachel keeps getting asked. They’re writing articles about how Midge is a bad parent, but nobody ever questions Joel.”

Midge understands that she "can’t be a wife right now;” she’s sacrificing plenty of her personal life as is. But to yield even some of the child-rearing to the father of her children? How very modern, even by modern standards.

“They’re each carving their own path,” says Zegen, “but they still have these kids, so they have to make that work somehow.” The idea that they have to make it work, not just she — and that the work can actually be liberating for the man as well — is exciting.

But it’s not just Joel who finds the prospect of entering a new era as thrilling as it is nerve-wracking. Midge’s father Abe has also revealed himself to be not quite the blustery stickler for convention he first appeared. After having his own marital and career shakeups last season, Abe kicked off this one with his daughter’s broken engagement and the revelation that his wife Rose’s trust fund has been quietly bankrolling his lifestyle for ages. “You really think we live like this on your salary?” Rose asks him wearily, a sharp nod to all the ways women silently minimize themselves to make their men look bigger. The shock might make a lesser man fall apart. Not Abe. Soon, the long-buried bohemian inside him is awakened (though not enough to start sleeping in the nude like his boundary-challenged in-laws), and he’s getting arrested at a Lenny Bruce gig and playing host to a houseful of beatniks.

“It was always in there, I think, with Abe,” says Tony Shalhoub, who won an Emmy last year for his portrayal of Abe. “It was just covered over by life, by marriage, by having children, by getting a conventional job and his career — which he was proud of. It tended to extinguish that spark that was the real Abe when he was younger, his political side, that fire in his belly.”

And it’s been heartening to watch Abe, a man who truly adores his wife and family, take a cue from his daughter and start spreading his wings. “They’re both fighters and they’re both advocates for themselves and they’re both pursuers of truth and substance,” says Shaloub. “Abe is that same kind of person. He wants his life to have meaning beyond just a job and whatever level of success and financial security he can achieve — what we think of as the American dream. He feels he should have a deeper purpose.”

Unlike most of his young colleagues, Shalhoub is one member of the “Maisel” creative team who can actually recall the time his character exists in. “Abe’s a product — or a casualty — of a whole changing time," he says. "The culture is going through enormous changes. He’s a guy who’s lived through the Depression, the Second World War, the prosperity or so-called prosperity of the 1950s, that level of complacency. Now everything that he’s worked for and built up in his life has kind of lost its meaning for him."

"As I was growing up during this time, I watched my father and other guys of his generation go through similar mid-life crises and try to reevaluate what they’d done, how they’d landed where they did and how they were going to live out the second half of their lives. It was a difficult period," he continued. "I get to explore that, having witnessed it as a child. Seeing it from this perspective has given me a real appreciation for how tricky it was, especially being parents and raising children through that time.”

When we talk about equality, the subject often gets punted to the dank basement of “women’s issues,” as if feminism has nothing to offer men. And sure, the patriarchy has done all right by plenty of guys. But just as earlier shows like “Mad Men” explored the ways in which traditional gender roles were never a picnic for everybody, “Maisel” now does likewise. (It’s also nodded to this season as well how much more oppressive the world is if you’re not white or straight.) It's a view that understands that revolutions can occur with great sweetness and love, in ordinary kitchens and bedrooms.

“The writers do a beautiful job representing the problems for the American male,” notes Shalhoub, “especially at that time period. Given the fact that it's a female-driven show and its central character is someone trying to find herself, they’re really taking care of our characters.” And as they enter the Sixties, the Maisel men are at last redefining how to take care of themselves.