Little house of maybe: "American Masters" on fact, fiction and the life of Laura Ingalls Wilder

The beloved "Little House on the Prairie" author once said "All I have told is the truth, but not the whole truth" 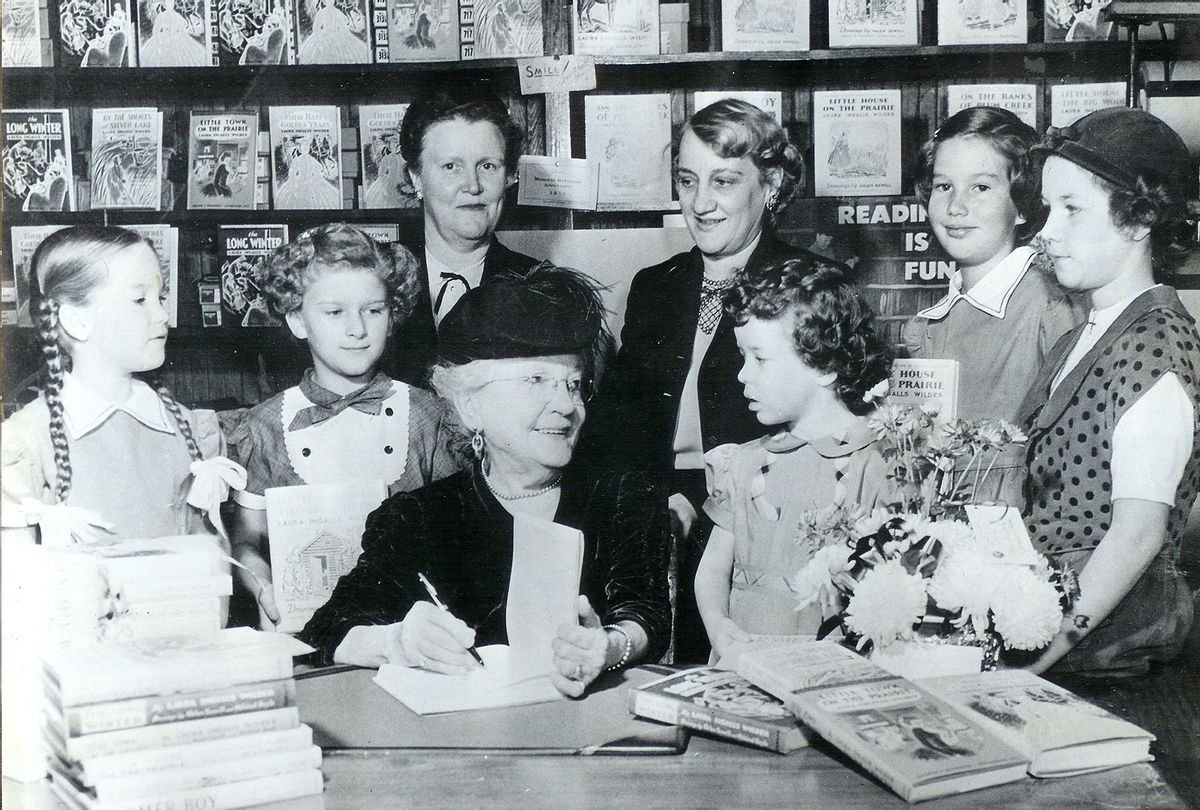 In March, the World Health Organization declared the novel coronavirus a global pandemic; by April, scores of Americans had taken up what can best be described as "urban homesteading" activities: baking bread, tending to gardens, raising chicks, cross stitching and quilting. This dovetailed with, or perhaps inspired, a noticeable cultural uptick in "Little House on the Prairie" content.

The New York Times' Brooks Barnes came out as a "Bonnethead" in his piece, "Comfort Viewing: 3 Reasons I Love 'Little House on the Prairie.'" People began forming "Little House" group texts. Alison Arngrim, who played mean girl Nellie Olsen in the 1974 TV series, hosted virtual readings of the books for fans via Facebook Live, while reporter Liam Stack tweeted, "I have done so much baking and stock-making and homespun cooking during the pandemic, it is like Little House on the Prairie. If the little house on the prairie was located down the block from a strip club and up four flights of stairs from a Yemeni bodega."

Barnes likened it to one of his grandmother's quilts.

"Some scratchy spots," he wrote. "But comforting and familiar and one of the first things I reach for when I'm feeling extra vulnerable, as has been the case lately in quarantine. It helps put the problems of today into perspective. 'We've come through worse,' Ma says wisely when anything bad happens. I trust her."

In light of that, PBS' new 90-minute documentary "American Masters — Laura Ingalls Wilder: Prairie to Page" comes at an ideal time. The series — which has previously turned its lens on Charlie Chaplin, Andy Warhol, Billie Holliday and Leonard Bernstein — takes viewers through the lives and legacies of artists and writers whose work has had an indelible impact on American culture.

Wilder is a particularly interesting subject precisely because her life seems to be so well-known. Generations of American children have been introduced to the "Little House" books at school, and the series basically mythologized Wilder and her experiences. What director Mary McDonagh Murphy does so well in this documentary is to establish the difference between Laura Ingalls Wilder the literary character and Laura Ingalls Wilder the woman.

Wilder was born in 1867 in Pepin County, Wisconsin, in what she would later call the "Little House in the Big Woods." Her father, Charles Ingalls (probably better known as Pa), decided to move his family — which at that time included his wife, Caroline, and his eldest daughter, Mary — westward for a better life.

That decision established the Ingalls family as pioneers, and Wilder was eventually recognized as a voice who could bring color to a pivotal time in our country's history. The documentary presents a quote from a speech she gave before her death in 1957.

"I realized that I had seen and lived it all, all the successive phases of the frontier," she said. "First, the frontiersman, then the pioneer, the farmers and the towns. Then I understood, in my life, I represented a whole period of American history."

Wilder didn't necessarily intend to become a writer, though she did hold onto scraps of poetry and essays from her school years. She was encouraged by her daughter, journalist Rose Wilder Lane, to compile her childhood memories into a collection as a way to earn some extra money. As the documentary reveals (though this has been known for some time), Lane likely co-authored, or at least edited, Wilder's work, which helped it get picked up by publisher HarperCollins.

Initially, the book was formatted as a memoir — titled "Pioneer Girl" and finally published in that form in 2014 — but publishers asked that she rework it into her series of children's books, starting with "Little House in the Big Woods."

A note from her publisher at the time read, "The more details you can include about the everyday life of the pioneers, such as the making of bullets, what they eat and wear, etc., the more vivid an appeal it will make to children's imaginations."

And that it did. Even today, I can recall details about Wilder and her siblings churning butter, Pa playing his fiddle, and the family blowing up a pig's bladder to play with it like a ball. It's seared into my consciousness along with passages from books like "The Wind in the Willows" and "Anne of Green Gables."

So are the tales of the family's sojourn westward in covered wagons through grassy fields. In the books, the Ingalls' journey is almost presented as a straight shot from Pepin County to De Smet, South Dakota, with a couple of detours along the way, but real life was much more complicated. "American Masters" enlists the help of historians and archivists like Caroline Fraser and Marta McDowell, as well as novelists like Linda Sue Park and Roxane Gay, to fill in those gaps.

In the books, Pa Ingalls describes his desire to strike out from Wisconsin as almost a compulsion. "My wandering foot gets to itching," he'd say. In reality, Ingalls was — like many Americans at the time — compelled to move due to the Homestead Act of 1862, which stated that "any current or future citizen, with a mere ten dollars, could claim a homestead of up to 160 acres of government land, and 'improve' the land by putting it to use as a family plot."

There was a promise of a better life for families who would make the difficult trek, but by 1875, the Ingalls family was struggling in ways that weren't fully presented in the book series. You may remember the horrifying line from "On the Banks of Plum Creek," where Laura describes a horde of locusts: "The cloud was hailing grasshoppers. The cloud was grasshoppers."

That was a real thing that happened, called the Rocky Mountain Locust Invasion. The bugs decimated fields and impoverished many farmers. While Wilder describes the events, she doesn't talk about how bad it got for Charles Ingalls. He eventually had to sign a pauper's oath, a sworn statement declaring he was essentially destitute, in order to gain resources to feed his family.

Ingalls struggled to maintain a living. The family hopped from town to town, sometimes under the cover of darkness, to escape debt. The family finally settled in South Dakota, where Charles became a civic leader.

This rush to settle the American West also served as a catalyst for the U.S.-Dakota War of 1862. The United States government had violated numerous treaties with the Dakota people, and combined with late annuity payments by federal "Indian agents," that led to increasing hunger and hardship among the Native population. Media coverage at the time incited fear of "massacres" and headlines tallied up the number of "white deaths."

Wisconsin was on the border of most of the conflict, and it's clear from both the books and archival materials that the Ingalls family's views of Native Americans mirrored those of most white Americans at the time. It's a mix of fear and fascination, underpinned by the belief that Native Americans were less than human.

But as Kate Beane, a Minnesota historian and a member of the Flandreau Santee Sioux tribe, says in the documentary: "Why are we 'only'? What does that mean for us? And what message does this give our children?"

Throughout "American Masters — Laura Ingalls Wilder," director Mary McDonagh Murphy makes an obvious, and much needed, point to approach the series and Wilder's life with nuance. Wilder was a product of her time and while her books remain well-loved, as writer Roxane Gay says, "they have to be taught in the proper context and not revisionist context."

There's a lot to be learned from the books about the harsh realities of pioneer life, as well as the joys of life in a tight-knit family. There are things that even appear aspirational for readers today, like the loving relationship between Laura and her husband, Almanzo, and the threads of self-sufficiency and resilience that run through the text.

But with that, "American Masters" asserts, readers must grapple with the depictions of Native Americans as "savages" and Wilder's fetishization of their "freedom." It means having tough conversations with students about why Pa Ingalls donned blackface and performed in a minstrel show. It means poking holes in the myth that the American West was empty and that the land belonged to no one.

Wilder was once quoted as saying, "All I have told is the truth, but not the whole truth."

McDonagh Murphy quietly urges longtime lovers of the books to help young readers establish the line between biography and fiction. In doing so, the books remain part of a cultural retelling of an exciting time in American history — even though they don't tell the full story.