Make quarantine your "stitch" with the subversive cross-stitch community 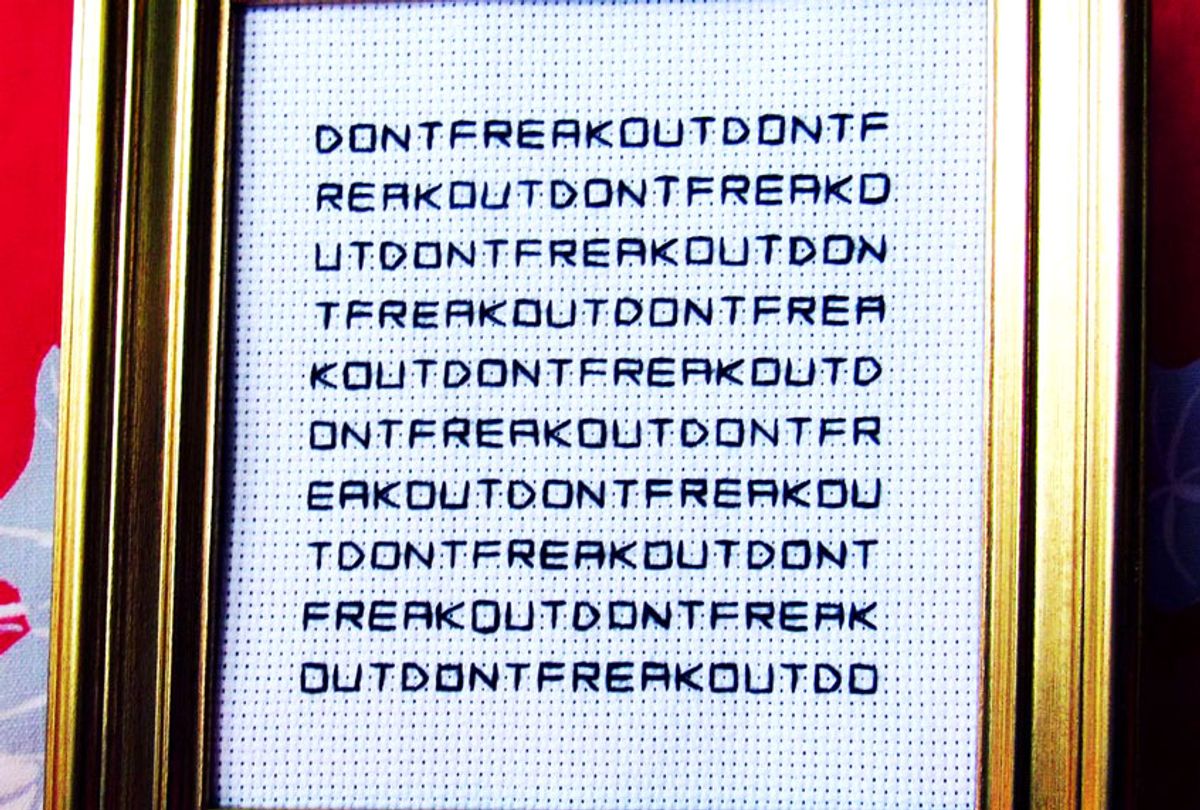 In 2003, Julie Jackson stopped by a craft store to buy a really ornate cross-stitch sampler — the kind with a guide to stitching the alphabet so it could be personalized as a wedding gift — as a kind of art therapy. She was stuck in a job she hated and, as she sat down to stitch, she decided to abandon the pattern.

"Instead, I used the alphabet to stitch 'f**k' in the middle and it really made me giggle," Jackson said. " I was familiar enough with the DIY movement which was beginning with knitting, so I decided to set up a website and sell my own kits."

She normally sells patterns that guide people through stitching phrases like "Bite Me," "Consent Is Sexy" and the adorably G-rated "Dang It All to Heck"; but after the novel coronavirus was declared a pandemic, she pivoted to release new, free PDF patterns.

"I started a series of free patterns: the first one was 'Don't Freak Out,'" she said. "Then I made a combo in 'Wash Your F**king Hands' and 'Don't Touch Your Damn Face.'"

After that, she released a pattern for "Stay The F**k Home" because she was so frustrated that people kept violating shelter-in-place orders. That one has had 5,000 downloads so far.

"When the quarantines started in early March, I was thinking of how I could help people stuck at home to process their frustration and also have something to laugh about," Jackson said. "Stitching is notoriously therapeutic, it was what I could bring to the table and offer for free."

As people are spending way more time at home — while also experiencing unprecedented stress — there's been an noticeable uptick in interest in what could be classified as "urban homesteading" activities: raising baby chickens, starting a victory garden, baking bread. Jackson's subversive coronavirus-themed cross-stitch patterns feel like a natural extension of this movement, but she's not the only one who is using cheeky takes on this traditionally domestic activity to pass the time at home.

Cynthia Hasenbein, an experienced cross-stitcher, just finished a piece that features the silhouette of a plague doctor and the phrase "Wash Your Damn Hands."

"I saw [that piece] floating around, both as the original art, and as others were starting the piece from the free Reddit pattern," Hasebein said. "My 12-year-old son was a plague doctor for Halloween – we are a quirky family; my husband and I are old punks — and I thought the piece would look lovely framed in our main floor bathroom."

Hasenbein explained that she was initially drawn to fiber art because of an embroidered tablecloth she was given as an heirloom. Because of this, she thinks of every piece she creates as an eventual heirloom for her children's children.

"It also makes me feel connected to my ancestors, and those before them, who surely worked on needlecraft through all sorts of pandemic illnesses and other world-changing events," she said. "I imagine they got the same calm feeling as I do when stitching."

Kate Tollefson is the owner of the Etsy shop Makin' Today Your Stitch. She has been designing coronavirus-themed patterns for her customers, as well. These include one called the "Social Distancing Tour" (designed to look like a concert poster, it features "acts" like "Garage & Day Drinking" and "Guest Room feat. Craft Supplies") and one that reads "Don't Forget Your Mask and Sanitizer."

Cross-stitching, Tollefson said, gives her something productive to work right now. If it's a touch irreverent, all the better.