Biden sounds the warning, and the fog of war descends: How bad will it get?

It was alternately a stirring and reassuring speech — but the underlying mood was dark. Are we heading into war? 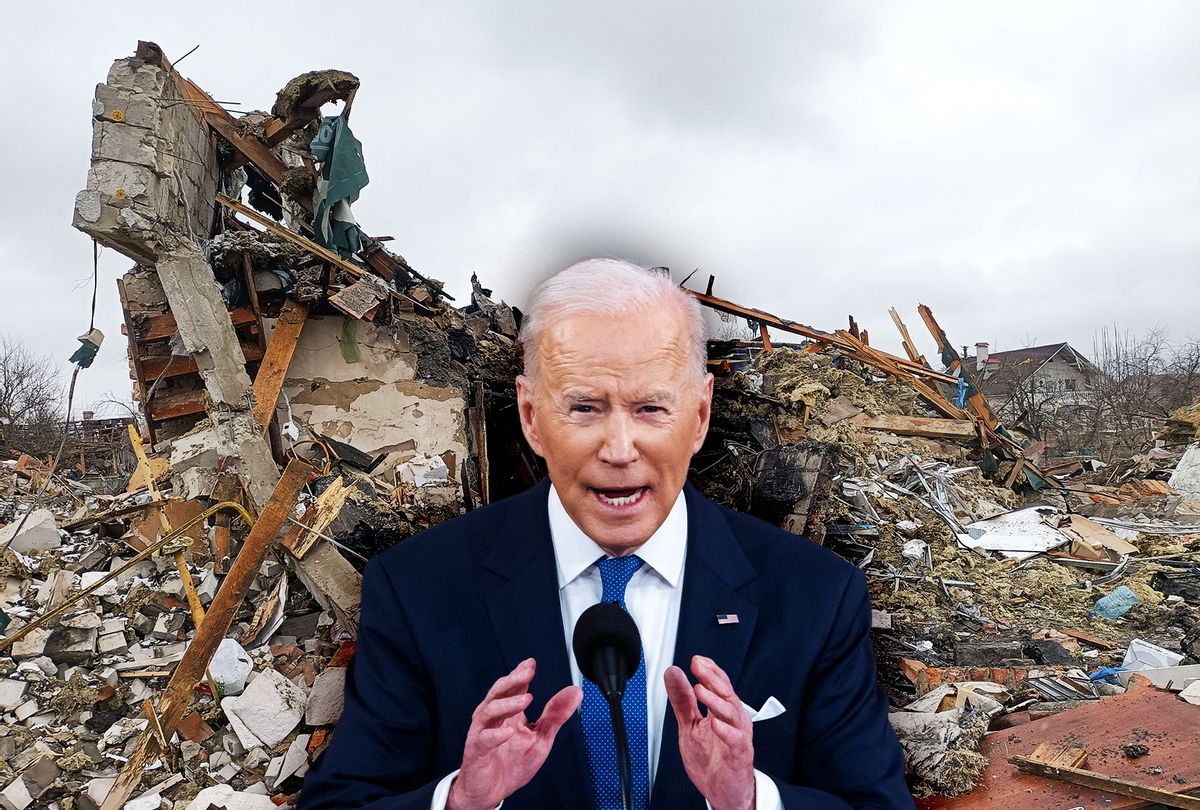 Joe Biden | Rubble in Zhytomyr on March 02, 2022, following a Russian bombing the day before (Photo illustration by Salon/Getty Images)
--

On more than one occasion, as a child going grocery shopping with my parents in the suburbs of Louisville, I saw a group of nuns together buying groceries at the local Krogers.

My parents, being devout Catholics, would always stop and offer greetings and otherwise show their respect. On more than one occasion I witnessed a group of redneck hecklers who would taunt the nuns about getting dates and wearing shorter skirts, or offered a variety of similar insults.

"What kind of idiot heckles a nun?" my dad would ask my mom. Mom would just shake her head.

On Tuesday night, the nation got an answer to my dad's question. As Joe Biden addressed a joint session of Congress in his first State of the Union address, Reps. Marjorie Taylor Greene and Lauren Boebert began heckling as the president spoke about his son Beau, an Army officer who served in Iraq and died of cancer in 2015.

It was a disrespectful show of stupidity and a low point in a speech that Biden used to highlight his administration's first year of accomplishments, as required by the Constitution. It was also  a speech Biden used to reiterate the international resolve against Russia and Vladimir Putin for the illegal invasion of Ukraine that has horrified the world.

Biden called it a "premeditated and unprovoked war," and vowed to defend all NATO countries with American troops, should the conflict widen. (Four member nations — Poland, Slovakia, Hungary and Romania — border Ukraine to the west and south.) In the meantime, Belarus, effectively a puppet state of Russia, has apparently committed troops to the war while nearly the entire rest of the world has sided with Ukraine. As the first week of this conflict ends, some pundits predict the beginning of World War III. Some, in fact, suggest it really began with cyber warfare more than two years ago, and as recently as this week, a Ukrainian journalist confronted British Prime Minister Boris Johnson by saying, "NATO is afraid of World War III, but it has already started."

In this chilling atmosphere, Biden, according to even some of his staunchest critics, including former Tea Party congressman Joe Walsh, delivered one of his best speeches. "I think he did a very good job," Walsh told me. "But not everybody got it."

Some pundits have criticized Biden for being foggy, befuddled, obtuse or obsequious in his first televised address before the nation. That criticism is more about style than substance. NBC's Chuck Todd was particularly harsh, saying, "I fear this is going to feel like a speech that didn't age well," without really explaining why.

The Wall Street Journal criticized Biden for failing to "rally the world to face new dangers after Russia invaded Ukraine."

Perhaps they heard a different speech than I did. Biden tried to reach a variety of different audiences, including our allies and the world community, along with American voters, Democrats and Republicans in Congress, the pundits and his many critics.

That's why he talked about funding police departments (not "defunding" them) and the need for coherent border and immigration legislation — a move that provided an opportunity for a bipartisan standing ovation.

That's also why he talked about unity and said, "Let's stop seeing each other as enemies and see each other for who we are — fellow Americans."

He was bluntest in speaking of the war in Ukraine. "We are inflicting pain on Russia and supporting the people of Ukraine," the president told the nation. "Putin is now isolated from the world more than ever." Then he cited a list of new sanctions, including closing off American airspace to Russian commercial flights and noting that the ruble had lost 30 percent of its value.

Then Biden spelled out exactly when and where American troops would engage Russia, if that becomes necessary. "And as I've made crystal clear, the United States and our allies will defend every inch of territory that is NATO territory with the full force of our collective power — every single inch."

That is no empty gesture. The world has vowed to reinforce the people of Ukraine, with military and humanitarian aid, in their fight against Russia. While airlifts are part of that supply effort, the straight supply link to Ukraine runs through Poland, a NATO and EU nation directly to the west. Putin is as aware of that as anyone else. If shots are fired in Poland, which seems an increasing possibility, then the U.S. will be in a ground war with Russia.

Make no mistake: This is the largest war in Europe since the end of World War II. Biden has surprised Russia by solidifying opposition to Putin's chosen war — which the Russian leader likely believed he could win within a few days — and apparently surprised the pundits as well, since to this point he's been highly effective in rallying America's allies to the cause.

When Putin threatened an escalation of the possibility of a nuclear war, Biden didn't take the bait. Jen Psaki, in one of her better performances in the White House briefing room, put down the combative rhetoric as swiftly as she has eviscerated Fox News reporters, for the moment allowing us all to take a breath.

Biden spoke to that as well on Tuesday night. The situation is as troubling as any in my lifetime, but despite the rising global tensions, the president sought to calm the world. "I want you to know that we are going to be OK," he said. "When the history of this era is written, Putin's war on Ukraine will have left Russia weaker and the rest of the world stronger."

As reassuring as Biden strived to be, and as blunt as he has been about Russian intentions for the last month, the fog of war is upon us. It will become increasingly difficult not to get sucked into it. Some are predicting a long-term struggle in Ukraine, similar to the U.S. involvement in  Afghanistan, that could go on for years or decades.

Taking that possibility into consideration, when Biden said, "From President Zelensky to every Ukrainian; their fearlessness, their courage, their determination inspires the world," those words take on a more nuanced meaning.

The president dramatically spelled out exactly where we are in history, and the criticisms levied against him make little sense. So many reporters increasingly seem out of touch and misinformed.

To paraphrase former Trump press secretary Sean Spicer, what did you want: Unicorns and rainbows?

Biden is grappling with serious issues, and our media are awash in pontificating, pompous peacocks of pallor, cackling like hens and more interested in the sound of their own voices than the gravity of the matters at hand.

Some in the press have said that Biden has lost the support of a majority of Americans, and they may be correct. Again, that remains the greatest problem with this administration. Biden has been, as he was Tuesday, very good at speaking to the public, when he chooses to do so. He doesn't do that nearly enough, and his surrogates, for the most part, are horrible at it. They become immersed in playing games with the networks while also being roasted by them or having their actions misinterpreted, because too many network reporters and anchors lack the experience to understand nuance in politics, even though they cover it.

But therein lies the bigger problem. No matter how much the Biden administration talks or doesn't talk, many of us in the press just don't get it. Donald Trump didn't care what we thought, and blasted out his venom with the ease of a meth-addled preacher on steroids — calling the entire media the "enemy of the people" while also relying on it to spread his larcenous lies.

Today the stakes have never been higher and the potential outcome never more severe — and, unfortunately, we don't get it.

Biden told us that we stand on the precipice. He told us in that calming, mellifluous voice that everything would be OK. I only hope he's right.

That was the point of that part of his speech, anyway. That was the issue and the moment that mattered. The focus of the United States is on containing the naked aggression of a Russian madman who is so intent on a power grab that even normally neutral Switzerland jumped in and said "No."

Ultimately, history will decide whether the strangulation tactics the world has employed are enough to choke the energy out of the Russian war machine, whether the sanctions will force an internal change that leads to new leadership in Russia, or whether Putin drags the world into a fiery hole from which we never emerge.

That was the subtext many didn't see on Tuesday night as they spoke out against the puerile and salacious antics of Boebert and Greene. It was the theme unseen by the pundits. It was the point missed publicly, and privately feared by many politicians.

And ultimately, that is the point the American people must understand for themselves.

Biden, with his experience on the international stage, understands far more than others what is at stake. Whether he communicated it effectively is the question. Where the world is at the end of this calendar year may render a judgment on how well he delivered his urgent message during his first State of the Union Address.

Read more on Ukraine, Putin, Biden and the war: