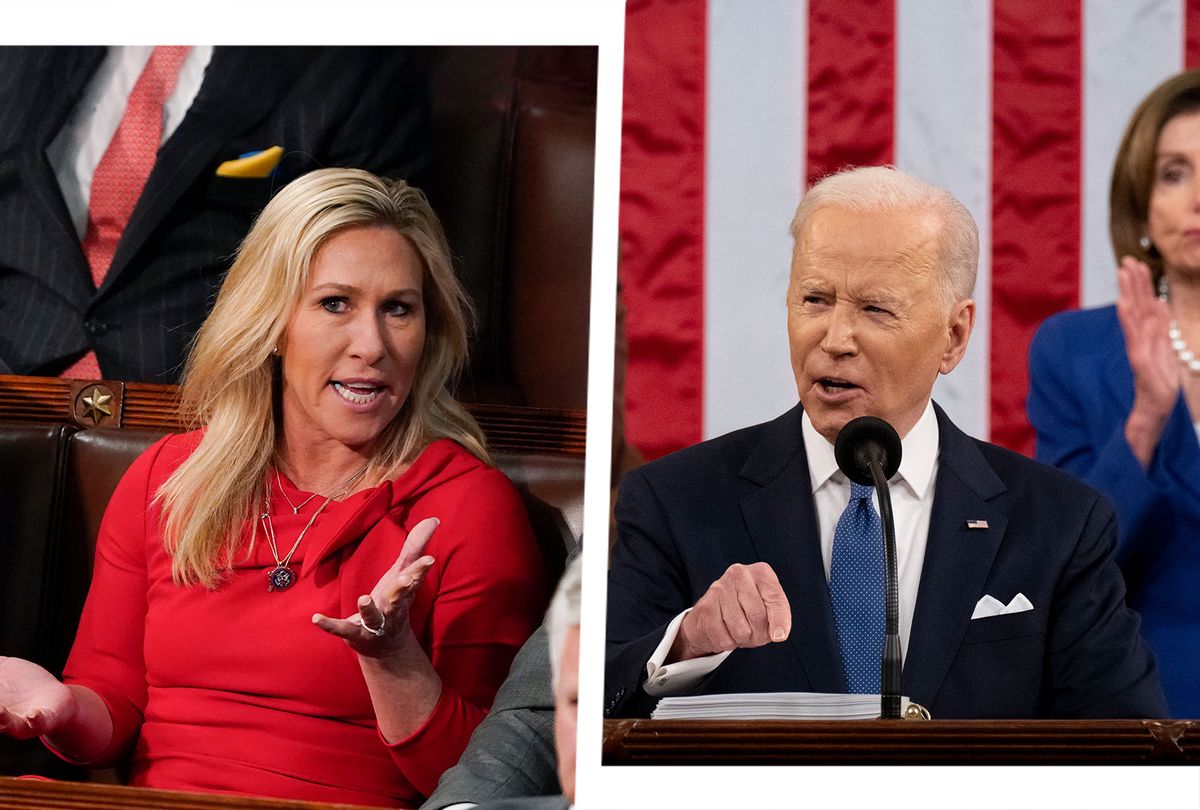 Marjorie Taylor Greene and Joe Biden at Biden's first State of the Union address to a joint session of Congress, at the Capitol on March 01, 2022 in Washington, DC. (Photo illustration by Salon/Getty Images)
--

Following President Biden's State of the Union address on Tuesday night, Rep. Marjorie Taylor Greene, R-Ga., who heckled the president midway through his speech, baselessly claimed that Biden has been "compromised" by Russia because the Kremlin allegedly has access to the laptop of the president's son, Hunter Biden.

"The president of the United States is totally compromised because every world leader has contents of Hunter Biden's laptop and much more to blackmail him," Greene said in her long-winded response to the president's speech on behalf of the so-called America First right-wing movement.

Greene also called Biden a "globalist" who is protecting "anyone, anywhere that has blackmail evidence on his sexually deviant, drug-addled, deadbeat-dad, pathetic, sorry, embarrassing excuse of a son."

Greene added that all the president "cares about is protecting Hunter Biden and he will not protect any of us. This is why I have introduced four articles of impeachment on Joe Biden." (Those articles have been almost completely ignored, including by her fellow House Republicans.)

Greene's conspiracy theory is part of a much broader Republican smear campaign against Biden over his son's former position on the board of the Ukrainian gas company Burisma. Conservatives have alleged that during the Obama administration, then-Vice President Biden withheld loan guarantees from Ukraine in order to shut edown a corporate corruption probe that might have implicated Hunter Biden.

In October 2020, The New York Post published a story that included documents supposedly sourced from Hunter Biden's former laptop computer, suggesting that its files included evidence of a meeting between Joe Biden and a Burisma adviser in 2015. That claim has been refuted by President Biden and no further evidence has emerged to support it. An FBI intelligence probe reportedly remains underway to determine whether the story was part of a Russian disinformation campaign.

But Greene has nonetheless spread the theory far and wide, claiming that Biden's foreign policy is being undermined by the possibility of Russian (or perhaps Ukrainian) blackmail — in an intriguing parallel to similar but unproven theories about Donald Trump.

"I am blown away with what we're seeing. The president of the United States, Joe Biden, is willing to take our military to war ... against nuclear Russia because of Ukraine," Greene said in a podcast interview with former Trump adviser Steve Bannon. "You cannot deny this, it's because Ukraine has the dirt on Hunter Biden. Ukraine has the dirt on Joe Biden, our president."

"This is why we can have many of our troops get killed in this war that Joe Biden wants to have happened," she added.

In fact, Biden has repeatedly made clear that U.S. troops will not intervene in the Ukrainian conflict, and would only engage with Russian forces if they invade a NATO nation. Biden and the leaders of other NATO nations have instead imposed stiff economic sanctions on Russia and are providing Ukraine with both humanitarian and military aid.

Read more on the exploits of the notorious MTG: