A bizarre Martian rock looks just like coral — but formed geologically. Here's how 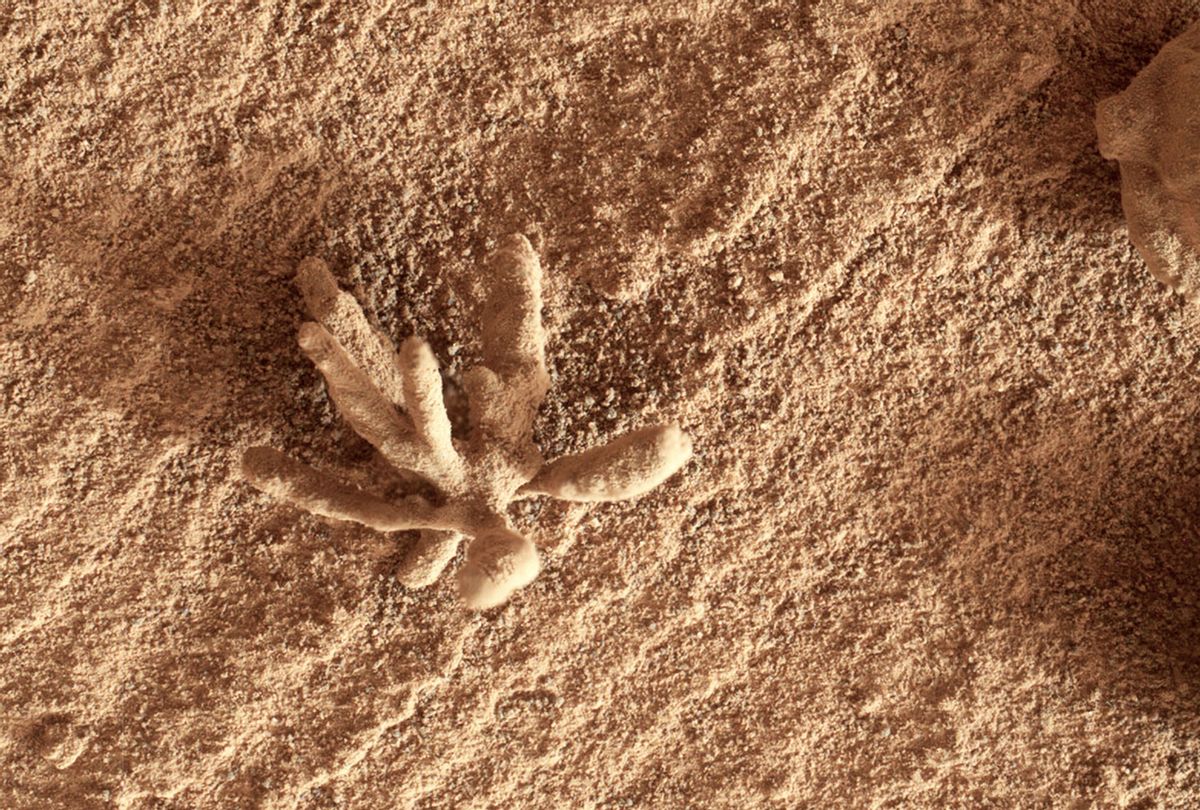 Smaller than a penny, the flower-like rock artifact on the left was imaged by NASA’s Curiosity Mars rover using its Mars Hand Lens Imager (MAHLI) camera on the end of its robotic arm. The image was taken on Feb. 24, 2022, the 3,396th Martian day, or sol, of the mission. The “flower,” along with the spherical rock artifacts seen to the right, were made in the ancient past when minerals carried by water cemented the rock. (NASA/JPL-Caltech/MSSS)
--

It looks like a flower, or maybe a chunk of undersea coral — but scientists assert it is not, nor has ever been, alive.

NASA's Curiosity rover, currently cruising around Mars, captured an image of this tiny red "crystal" mineral deposit, which is just two-fifths of an inch wide. Though shaped like a sea sponge or fungus, the newly-dubbed Blackthorn Salt is comprised of minerals that exist after Martian rocks interacted with water long ago. By definition, this makes the Blackthorn Salt a diagenetic feature, or one that occurs after sediment is turned sedimentary rock. These which can be round or dendritic (branched) like the Blackthorn Salt.

Curiosity itself is a car-size rover more than six feet tall and with a seven foot arm that stretches toward rocks with the tools NASA scientists need in order to examine them. It can also bring rocks, soil and even air on board and study them directly on the rover itself. Curiosity is currently exploring Gale crater, which is 96 miles wide in diameter and can be found on the southeastern section of the planet. The central peak of Gale is Aeolis Mons, an 18,000 foot mountain. Curiosity is going to explore both that mountain and the nearby region.

Martian geology has surprised scientists before. Last year the scientists behind the Perseverance rover were baffled when they use a drill to extract rock samples and came back empty-handed. Although they could confirm that they had indeed drilled into the rock, they could not figure out why samples had not been collected — until they determined that their drilling had likely caused the rock to crumble into "small fragments." In other words, they had unintentionally pulverized the very materials they had hoped to study until they became an essentially useless powder.

As for people hoping that the Blackthorn Salt was actually proof of Martian life: Scientists now believe that if life does exist on Mars (or if it did previously), it would almost certainly be microscopic — no land-roving, multicellular Martian dinosaurs.

"I think the first thing to keep in mind in our expectations for life on Mars is that it's probably microbial," Dr. Woodward Fischer, a professor of geobiology at Caltech, told Salon last year. While they might have left a fossil record, it will not be as easy to detect as the existence of dinosaurs on Earth. Indeed, two NASA scientists claimed in 1996 that they accidentally found a fossilize microbe while looking through a Martian rock at over 100,000 time magnification. Although their assertion is controversial, it remains the most concrete case for life on Mars ever discovered. The fossilized object had many structures that indicate it came from a once-living microorganism. These include grains formed by pyrite, made from iron and sulfur, and which were nearly pure. The only known way to produce such pure crystals is through the biological processes inside the bodies of bacteria.

"When it comes to microbes, there is a fossil record, but it's much more subtle and it's much more nuanced," Fischer explained, since microbes express their diversity through their metabolism rather than their shape or form. As such, scientists seeking proof that life once existed on Mars are not going to seek out the same things as someone trying to find trilobite fossils. They will instead look for "certain minerals that the environment doesn't otherwise want to make, but the presence of biology there helps make those minerals," Fischer told Salon, such as certain iron oxide minerals. They might also look for microscopic preservation of parts of cells themselves" such as little filaments and little rods and balls that would actually reflect their former cells."

Unfortunately, because the Martian soil is so unpredictable — indeed, so literally alien — it is likely going to present more features like canals and flowers that could be mistaken as proof of life.

For more Salon articles about Mars: