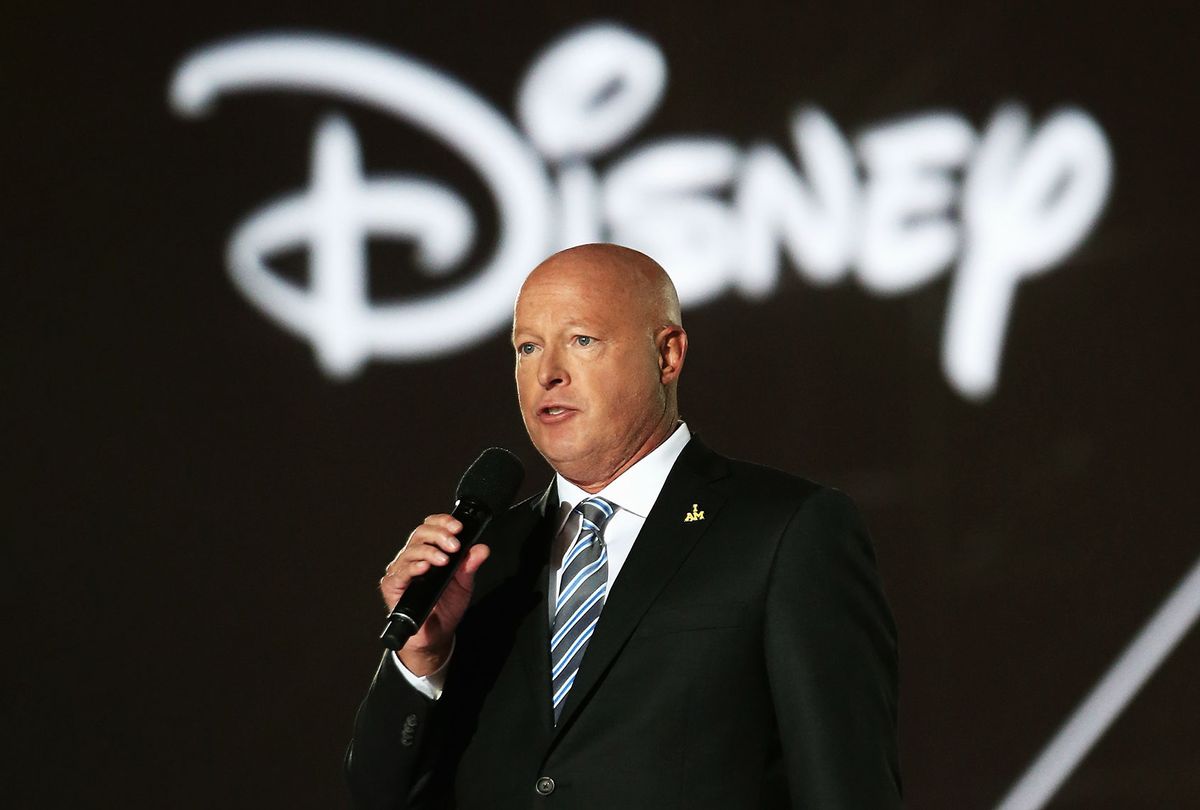 During the company's annual shareholders meeting on Wednesday, Chapek said that Disney was "opposed to the bill from the outset" but took an unbiased stance in order to work with Republican supporters "behind the scenes" and convince them to not pass the legislation.

"I know that many are upset that we did not speak out against the bill," the CEO said in an audio recording from the event. "Now, we were opposed to the bill from the outset, but we chose not to take a public position on it because we thought we could be more effective working behind the scenes, engaging directly with lawmakers on both sides of the aisle. And we were hopeful that our longstanding relationships with those lawmakers would enable us to achieve a better outcome. But despite weeks of effort, we were ultimately unsuccessful."

Chapek added that he called Florida Governor Ron DeSantis to discuss the repercussions of the bill with LGBTQ+ members of Disney's senior team.

"The governor heard our concerns and agreed to meet," Chapek confirmed. The CEO also said the governor assured him that the law would not "unduly harm or target" the LGBTQ+ community despite its harmful amendments and motives.

RELATED: Florida students are staging walkouts and getting suspended for handing out pride flags in protest

A representative for DeSantis released a written statement later Wednesday, stating that the governor did speak with Chapek but is still set on passing the bill.

"This is the first time we have heard from Disney regarding HB 1557," the statement outlined. "The governor did take the call from Mr. Chapek. The governor's position has not changed."

The statement also accused media outlets of pushing false narratives about the bill and presenting the legislation as more harmful than it actually is:

"Governor DeSantis has always been open to hearing from Floridians and having conversations about legislation — as long as those discussions are grounded in facts, not false media narratives. Anyone who has questions or concerns about the Parental Rights in Education bill is encouraged to read the bill, rather than distorted coverage in mainstream media, which regurgitates false partisan talking points."

The "Don't Say Gay" bill was passed by the Florida Senate on Tuesday and is currently waiting to be signed into law by DeSantis. The legislation previously included an amendment requiring teachers to disclose their students' sexual orientation to parents. Now, the revised bill prohibits "classroom discussion about sexual orientation or gender identity" in schools.

According to the accountability news site Popular Information, Disney "has donated $249,126 to members of the Florida legislature that voted for the 'Don't Say Gay' legislation and $50,000 to Florida Governor Ron DeSantis (R)" in the last two years. The company also funded Florida Republican Dennis Baxley and his past political campaigns. Baxley, who is a key sponsor of the bill and a notorious supporter of similar anti-gay legislation, previously said he "simply can't affirm homosexuality" in a 2015 radio interview.

Chapek also pledged to donate $5 million to the Human Rights Campaign (HRC) and other LGBTQ+ rights organizations, according to Variety. The advocacy group, however, refused the donation, urging Disney to take more "meaningful action" against the bill and its supporters.

"The Human Rights Campaign will not accept this money from Disney until we see them build on their public commitment and work with LGBTQ+ advocates to ensure that dangerous proposals, like Florida's 'Don't Say Gay or Trans' bill, don't become dangerous laws," HRC interim president Joni Madison said in a statement on Wednesday evening. "While Disney took a regrettable stance by choosing to stay silent amid political attacks against LGBTQ+ families in Florida — including hardworking families employed by Disney — today they took a step in the right direction. But it was merely the first step."

In light of Chapek's recent comments, Disney's employees continued to condemn the company, now alleging in a letter that corporate executives censored queer affection and relationships in Pixar films.

"We at Pixar have personally witnessed beautiful stories, full of diverse characters, come back from Disney corporate reviews shaved down to crumbs of what they once were," the letter stated. "Even if creating LGBTQIA+ content was the answer to fixing the discriminatory legislation in the world, we are being barred from creating it."

The letter also addressed the shareholder's meeting and criticized Disney for actively choosing to "not take a hard stance in support of the LGBTQIA+ community."

"They [Disney] instead attempted to placate 'both sides' — and did not condemn hateful messages shared during the question-and-answer portion of the meeting," the letter continued.

Disney's writers, animators and creators have all used their platforms to speak out against the company, vocally expressing their hurt and anger. Dana Terrace, an animator, writer and creator of the Disney Channel animated series "The Owl House," took to Twitter to criticize her employer's recent actions and affiliations.

"It's honestly hard to talk about this stuff," Terrace said in a video post. "I'm someone who had a hard time coming to terms with my queerness until my mid-twenties because of stuff like this, because I thought I shouldn't exist, because no one even told me I had the option of existing."

"And, man, I know I got bills to pay but working for this company has made me so distraught," she continued. "I hate having moral quandaries about how I feed myself and how I support my loved ones."

Terrace added that she and her fellow creatives will organize a charity livestream on March 13.

"Sorry for the lack of captions! In summary: Disney's still going to send money to the sponsors of the discriminatory Don't Say Gay bill & in response me, & a few other rad artists, are holding a charity event for LGBTQ+ orgs," she wrote. "Let's have fun & do some good."

On Monday, Disney CEO Bob Chapek sent an internal memo to the company's staff in lieu of a personal, public statement denouncing the bill and its supporters. Chapek offered a few words of support to the LGBTQ+ community and shared that the company will encourage change with "inspiring content." At that time, Chapek questioned corporate advocacy, asserting that public statements "do very little to change outcomes or minds."