Accused Russian agent who lobbied lawmakers only donated to one politician: Tulsi Gabbard

Why did Elena Branson donate $59.95 to Gabbard? And who is "Representative-1" cited in the criminal complaint? 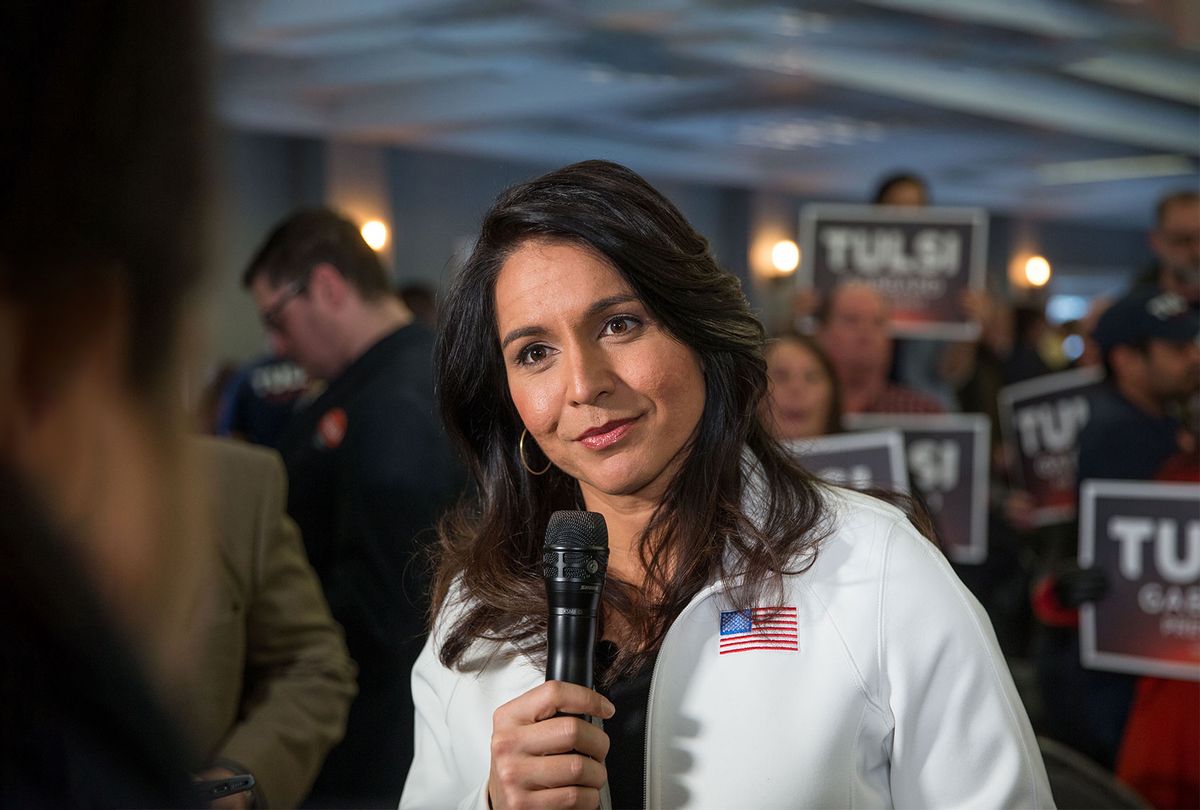 A Russian-American woman accused of illegally acting as a Russian agent made only one small political donation — and it was to the 2020 presidential campaign of former Rep. Tulsi Gabbard, according to campaign finance records.

Elena Branson, also known as Elena Chernykh, was charged this week with illegally promoting pro-Russia policies at the direction of top Kremlin officials without registering as a foreign agent, the Justice Department said Tuesday. Branson, who is accused of running a Russian "propaganda center" in New York for nearly a decade, only donated to Gabbard during that period, according to Federal Election Commission records first flagged by The Daily Beast.

Branson made two small contributions in 2019 to Gabbard's presidential campaign for a combined total of $59.95, which even for a marginal candidate was insignificant. The Daily Beast observed that the donations "raise questions about why an alleged Russian agent tasked with currying favor with U.S. politicians would zero in on Gabbard, and only Gabbard."

The DOJ complaint against Branson alleges that she targeted officials in Hawaii, which Gabbard represented in Congress at the time, on behalf of Russian officialsseeking to block a proposal to change the name of Russian Fort Elizabeth, a former Russian military installation on the island of Kauai (part of Gabbard's district), to its original Hawaiian name. The DOJ said that Branson provided Hawaiian officials with "messages from Russian officials" and also organized "a trip for Hawaiian officials to Moscow to meet with high-ranking Russian Government personnel."

The lobbying effort involved communications with an unidentified member of Congress, "Representative-1," according to the DOJ. An FBI agent's affidavit cited an email that Kauai County councilwoman Felicia Cowden forwarded to Branson in 2019 between Cowden and "an individual working in the office of a member of the United States House of Representatives (Representative-1)." Cowden asked the aide whether "Representative-1" would be interested in meeting an "extraordinary group of people regarding Russian diplomacy," including Branson and "two diplomats from the Russian embassy in Washington D.C."

Nine days after the email, Branson donated $49.95 to Gabbard's campaign.

It's unclear whether Gabbard had any contact with Branson or Russian officials. Branson later organized a trip to Russia during which local Kauai officials met with Kremlin representatives.

"I am not coming or communicating because I am being watched. It feels wrong for me to be involved that way," Cowden wrote in a handwritten note to Branson, according to the DOJ.

The park's name has not been changed.

A spokesperson for Gabbard told the Daily Beast in a statement that she had been unaware of Branson's donations until the report.

"Congresswoman Gabbard's campaign has received thousands of contributions over the years, so she was not aware of Branson's miniscule [sic] contributions ($10 and $49.95) to Tulsi Now, nor is she aware of having any interaction with her," the spokesperson said, adding that Gabbard is "not familiar with any park or fort or any other issues around this."

The spokesperson said Gabbard would donate the money to a charity that supports veterans "because it appears that Branson may be acting as an agent for a foreign country," adding that law enforcement has not contacted Gabbard's team.

Gabbard, who has long been accused of being an apologist for Russia and President Vladimir Putin, recently argued that Ukraine was not a real "democracy" and called for NATO to block Ukraine from joining to appease Putin's demands. Gabbard's presidential campaign was boosted by numerous Putin supporters and she previously met with Syrian President Bashar al-Assad, a Putin ally, downplaying his responsibility for chemical attacks on civilians.

Former Secretary of State Hillary Clinton alleged in 2019 that Russians were "grooming" Gabbard for a third-party run to hurt Democrats and had a "bunch of sites and bots and others way of supporting her" ahead of the 2020 presidential campaign. Gabbard ultimately ran for president as a Democrat. She dropped out of the race in March 2020 after consistently polling at 1 to 2 percent and endorsed Joe Biden. But her controversial statements have made her a favorite of the pro-Trump right, and she has drawn praise from former Trump strategist Steve Bannon, white nationalist Richard Spencer, conspiracy theorist Mike Cernovich and various online extremist groups.

Branson, who fled the U.S. last year and has not been captured, had extensive ties to top Kremlin officials and "corresponded with Putin himself," according to the Justice Department, amid a "wide-ranging influence and lobbying scheme with funding and direction from the Russian government." FBI official Michael Driscoll said Branson ran a "campaign to identify the next generation of American leaders, cultivate information channels, and shape U.S. policy in favor of Russian objectives." Branson was charged with six criminal counts, including failing to register as a foreign agent and making false statements to the FBI.

During the 2016 presidential campaign, Branson tried to meet with then-candidate Donald Trump or his daughter Ivanka and invited them to her group's annual Russia Forum in New York at the behest of an unnamed Russian minister. Branson wrote in a message to Trump that if his "busy schedule will not permit your attending our forum, perhaps you can suggest one of your children ... who have followed in your footsteps," prosecutors said in the complaint.

"There is no indication that the now-former President or his children attended the referenced meeting," prosecutors said.

The outreach continued after Trump won the election. Days after he was declared the winner, Branson emailed an unnamed Trump adviser, inviting Trump to the World Chess Championship in New York and "expressing congratulations for their victory in the presidential election," prosecutors said, adding that there is "no indication the now-former President attended the referenced event."