Why is Belarus supporting Russia in Putin's war with Ukraine?

One of Ukraine's neighbors has stuck with Putin, and is now a key component in Russia's military strategy 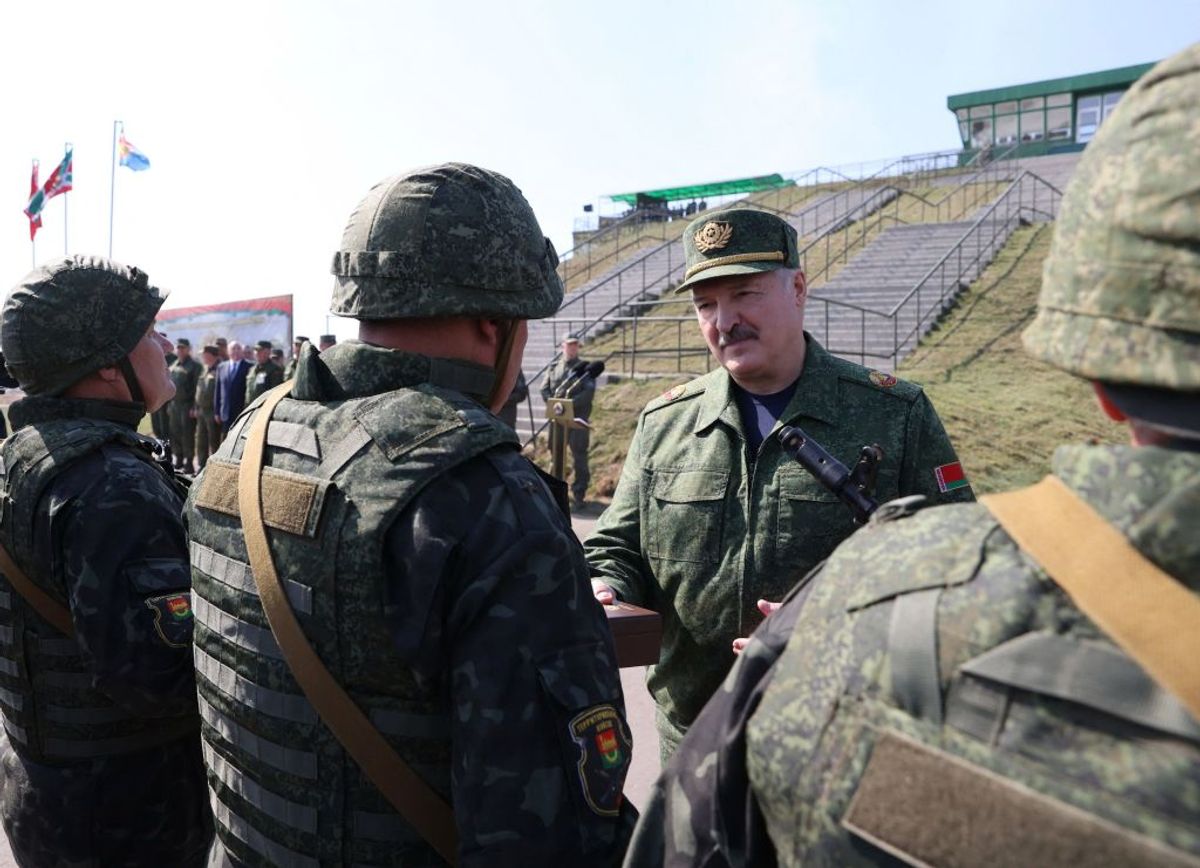 Belarus President Alexander Lukashenko greets the troops during a military drill outside Brest, on Sept. 12, 2021. (Maxim Guchek/BELTA/AFP via Getty Images)
--

Russia is attacking Ukraine, but Belarus, a neighboring country, is "the other aggressor in this war," European Union President Ursula von der Leyen said on Feb. 27.

One politician, Alexander Lukashenko, has ruled Belarus with a draconian hand for the last 28 years, with no interruption in power. And now, Lukashenko is supporting Russia in the war, reciprocating Russian President Vladimir Putin's recent help in maintaining his own political power.

Putin is using Belarus as a staging ground for his war, which has resulted in hundreds of Ukrainian civilian deaths, and caused an estimated 3 million people to flee the country. Russian troops have crossed into Ukraine through the Belarusian border in the north.

As an expert on Eastern Europe, I believe there are three key points to understand about Belarus' involvement in the Ukraine war.

Belarus is a former Soviet republic of 9.4 million people that borders both Russia and Ukraine as well as Lithuania, Latvia and Poland. It is also Europe's last dictatorship.

Lukashenko has spent nearly three decades balancing his ties to both Western powers and Putin. But the last presidential election marked a turning point that pushed Lukashenko closer toward Putin.

Lukashenko claimed victory after the Aug. 9, 2020, election, which international experts widely consider fraudulent. Lukashenko received 80% of the popular vote, an impossibly favorable result given public discontent with his regime.

An unprecedented public uprising followed, as hundreds of thousands of Belarusians protested the election results.

Putin offered financial and military support to help Lukashenko silence the protests — without any international response or pushback. Putin also warned foreign powers not to interfere in Belarus' affairs. This promise boosted Lukashenko's confidence and feelings of impunity.

Since 2020, Belarus has faced a series of international economic sanctions that further alienated Lukashenko from the West. On March 2, the EU and the U.S. announced a new set of sanctions that restricts technology and potential war material exports to Belarus.

The lack of international reaction to Putin enabling Lukashenko's behavior — alongside the economic pressure — pushed the Belarusian leader even closer to the Kremlin. This leaves Lukashenko with a limited ability to have an independent, or neutral, position on the war.

The human rights situation in Belarus has sharply deteriorated since the 2020 elections, prompting an estimated 100,000 to 200,000 people to leave Belarus for neighboring EU countries and Ukraine.

People increasingly cannot freely express their opinions about any of the government's decisions, for fear of persecution and arrest.

Since 2020, Belarus has detained more than 1,000 political prisoners, the U.S. State Department reported in January 2022.

And at least 497 journalists and media workers were detained by the government during the first eight months of 2021, according to UN human rights expert Michelle Bachelet. An estimated 129 Belarusian nonprofit and human rights organizations also closed down during this time frame.

Despite threats of government fines and arrests, thousands of Belarusians again took to the streets on Feb. 27 to protest the referendum and to express solidarity with Ukraine. As a result, police arrested an estimated 800 protesters.

The silencing of public opinion gives Putin more power to exploit Belarusian territory for his political and military interests. Belarusians cannot apply pressure to the government and stop Lukashenko from following Putin's orders.

Belarus is a strategic stage for Russia

The border between Belarus and Ukraine stretches about 674 miles — roughly half the length of Ukraine's border with Russia. This significantly expanded Russia's base for attacking Ukraine.

Belarus and Russia conducted large-scale, joint military exercises ahead of the Feb. 24 invasion of Ukraine. Despite public assurances from the Belarusian government that the Russian troops would go back to Russia, some 30,000 Russian troops extended their stay in Belarus, and many eventually crossed into Ukraine.

Lukashenko continues to follow Putin's orders as the war escalates.

Belarus' military ties to Russia have strengthened since 2020.

Lukashenko announced in September 2021 that Russia would send military equipment, including helicopters and air defense systems, to the Belarusian-Ukraine border.

Two months later, Lukashenko broke his neutrality on Crimea, a Ukrainian peninsula that Russia forcibly annexed in 2014. The Belarusian leader publicly recognized that Crimea was Russian territory. Lukashenko also offered to host Russian nuclear weapons if NATO moves nuclear weapons from Germany to Eastern Europe, as had been reported.

Lukashenko repeated his plan to station Russian warheads on Belarusian soil on Feb. 27, speaking at a polling station on the day of the referendum.

Russia's ability to place nuclear weapons in Belarus has raised alarm for neighboring NATO countries, chiefly Poland, Latvia and Lithuania, as well as the U.S. and other Western powers.

By hosting Russian troops and weapons, Lukashenko has shown that he is closely aligned with Putin — despite the popular will of the Belarusian people to maintain distance.

Tatsiana Kulakevich, Assistant Professor of instruction at School of Interdisciplinary Global Studies, Affiliate Professor at the Institute on Russia, University of South Florida