The royal couple, William and Kate, cancel trip to Belizean village after protests of colonial legacy 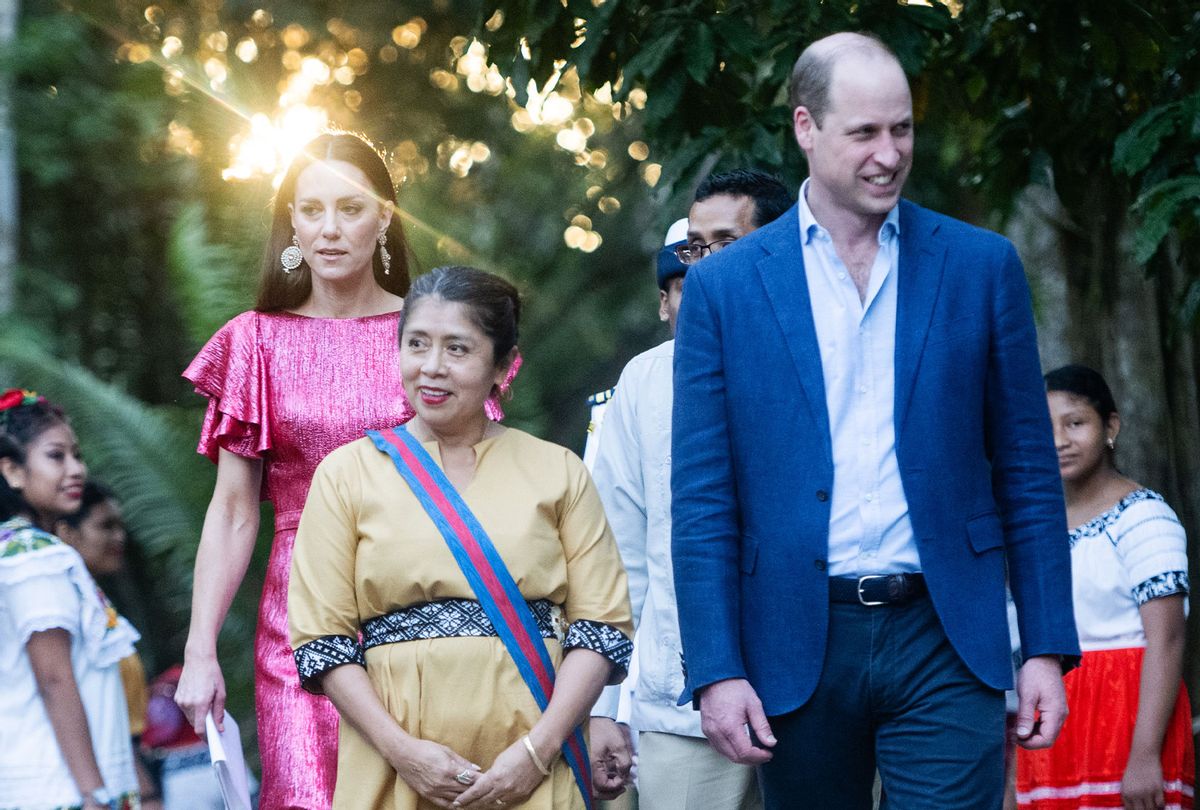 Prince William, Duke of Cambridge and Catherine, Duchess of Cambridge attend a special reception hosted by the Governor General of Belize in celebration of Her Majesty The Queen’s Platinum Jubilee on March 21, 2022 in Cahal Pech, Belize. The event was held at the Mayan ruins at Cahal Pech, and celebrated the very best of Belizean culture. (Samir Hussein/WireImage/Getty Images)
--

Prince William and Duchess Kate arrived in Jamaica on Tuesday to growing protests after being forced to recently cancel their trip to a village in Belize, the first stop on a planned tour throughout several Commonwealth nations in the Caribbean, after a group of villagers protested the couple's visit and Britain's past colonial influence in the region.

The first demonstration staged on Friday, reportedly stemmed from a dispute over where the couple would land their helicopter upon arrival. According to Sky News, the Cambridges expected to touch down on "contested property" between residents of Indian Creek village and Flora and Fauna International for a visit to the Akte 'il Ha cacao farm. Photographs taken of the protest showed demonstrators holding several anti-colonialist signs, one of which read: "Colonial legacy of theft continues with Prince & [Flora and Fauna International]." Other signs displayed messages like "Prince William leave our land" and "Not your land, not your decision." According to the The Times of London, conversations between the organizers of the event and villagers registered "very colonial in nature."

The development is a significant hiccup in the royal couple's eight-day tour to Belize, Jamaica, and the Bahamas in honor of the Queen's Platinum Jubilee, a celebration of Queen Elizabeth's seventy years service as Britain's monarch.

The protest calls upon a darker time in Britain's past, during which the imperial country installed extractive economies in of several nations throughout the Caribbean, enforcing this system of exploitation through racial terror and violence.

Residents of Barbados, for example, lived under British rule for 400 years until the former British colony declared independence from Britain in 1966 amid the Black power and anti-colonialist movements that swept the globe in 1960s and '70s. Throughout the 18th and 19th centuries, British forces enslaved roughly half a million African people on Barbadian sugar plantations, as Smithsonian Magazine noted, with countless violent anti-slavery rebellions erupting at the time. In late 2021, the nation formally ended its 400-year connection to the British crown when it removed Queen Elizabeth II as its ceremonial head of state.

RELATED: A decade after William and Kate's royal wedding, the "anyone can be a princess" fantasy is shattered

Last week, dozens of Jamaican professors and politicians reportedly demanded the same, along with an apology and reparations from the prince and duchess in light of Britain's past misdeeds.

"We see no reason to celebrate 70 years of the ascension of your grandmother to the British throne because her leadership, and that of her predecessors, have perpetuated the greatest human rights tragedy in the history of humankind," read a Sunday letter signed by the Advocates Network Jamaica, an alliance of organizations and individuals in Jamaica and the Jamaican Diaspora.

"We are of the view that an apology for British crimes against humanity, including but not limited to, the exploitation of the indigenous people of Jamaica, the transatlantic trafficking of Africans, the enslavement of Africans, indentureship and colonisation is necessary to begin a process of healing, forgiveness, reconciliation and compensation," the letter added.

Mike Henry, a Jamaican lawmaker who has led a years-long movement effort to collect 7 billion pounds in reparations, said that an apology from Britain is in order to even begin to address the sheer "abuse of human life and labor."

"An apology really admits that there is some guilt," he told the Associated Press.

RELATED: For many royal watchers, allegations of racism have shaken their faith in the Anglophilic fairy tale

It isn't the first time that the royal family has come under accusations of racism in recent years.

In a bombshell CBS interview last year with Oprah Winfrey, Prince Harry and Meghan Markle, the Duke and Duchess of Sussex, cited racism within the British monarchy as one of the chief reason's for their unprecedented exit from the royal family. Markle, who is biracial, told Winfrey that at least one member of the family expressed concerns over "how dark [their son Archie's] skin might be" while she was pregnant with him.

"That conversation, I am never going to share," she said. "At the time it was awkward, I was a bit shocked."

After the interview, Prince William alleged that the royal family is "very much not racist" – a claim that was widely scorned after photos resurfaced of the prince and duchess' 2012 trip to Tuvalu, where the couple was carried around in throne-like chairs by locals of Honeira.