A decade after William and Kate's royal wedding, the "anyone can be a princess" fantasy is shattered

As the Palace is still reeling from accusations of systemic racism, Will & Kate's wedding anniversary seems fraught 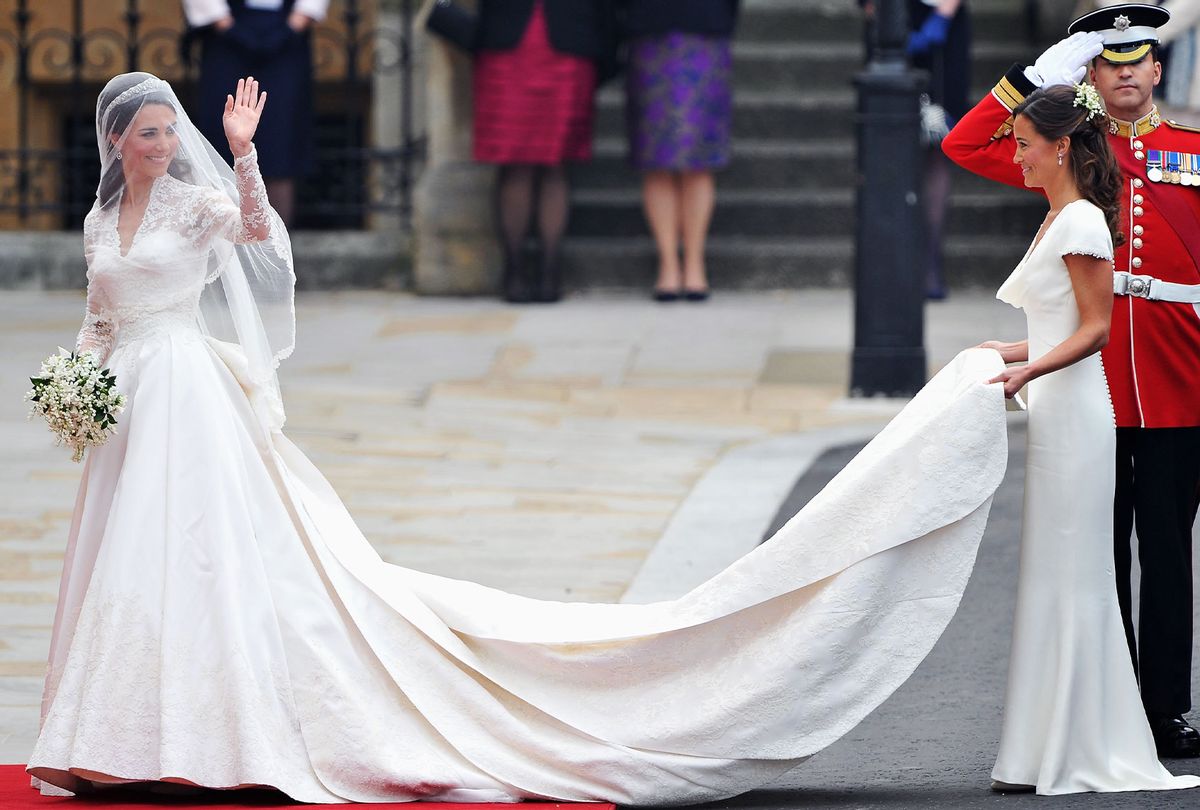 Catherine Middleton waves to the crowds as her sister and Maid of Honour Pippa Middleton holds her dress before walking in to the Abbey to attend the Royal Wedding of Prince William to Catherine Middleton at Westminster Abbey on April 29, 2011 in London, England. (Pascal Le Segretain/Getty Images)
--

In 2011, 11 days before Prince William and Kate Middleton were married in a Westminster Abbey ceremony that was watched all over the world, Lifetime released a movie about their romance that was, as a press release said, "shot entirely in Los Angeles and inspired by true events."

Perhaps unsurprisingly,"William and Kate: The Movie" was universally panned for being unrelentlessly cringey. It was filled with lines like, "I say, Wills, I am not the heir — I am just the spare," which was delivered by Prince Harry (Justin Hanlon), and there was a surprising amount of screentime dedicated to William (Nico Evers-Swindell) staring at his phone in the rain post-temporary break up with Kate.

None of the actors really looked like the royals they were playing, and there were some obvious continuity errors, as well, like drivers making their way down the wrong side of the road and mountain peaks making up the background shot for a scene depicting a pheasant hunt in Gloucester.

The Guardian declared the movie "toe-curlingly, teeth-furringly, pillow-bitingly ghastly," while the Daily Mail said that the film "takes the romance of the century and turns it into a cheap, shonky and unintentionally hilarious filmus horribilis."

I rewatched "William and Kate: The Movie" over the weekend in honor of the 10-year anniversary of their royal wedding on April 29. I was curious if, in the decade since it first premiered, the film could be viewed through a kind of unintentional camp lens that could render it a cult classic a la "The Room." It cannot. "William and Kate: The Movie" is still undeniably awkward.

Though what I was most struck by wasn't the wooden acting or the film-wide wardrobe that seemed to be composed only of beige articles of clothing. It was how hollow the premise of the movie, and much of the coverage of the courtship itself, feels in retrospect — especially following Harry and Meghan's bombshell interview with Oprah  exposing  racism in the Palace.

Middleton's ascendency to royal bride was lauded as a kind of real-world fairy tale. When news of her engagement broke, British newspapers proclaimed that she would be the "first middle-class queen since Anne Boleyn." Middleton's parents were self-made millionaires, so "middle class" is perhaps an overstatement, but the implication that they were not "old money" held.

As such, like in the innumerable princess fairy tales that came before it, the moral of Kate's story as presented in both the movie and in tabloid spreads was that if you are beautiful or smart or intrinsically good enough, you'll be swept away from mundanity into a better life. It's a lovely fantasy, but one that conspicuously ignores the question of for whom society deems that fantasy to be out of reach.

The writers of "William and Kate: The Movie'' imbued the script with an insinuation that the royal couple was going to challenge the monarchical status quo in some way. It's unclear how, exactly (though the writers did land on the surprisingly shady line for William: "I'm not sure we represent anything except a desperate hold on an irrelevant past").

This idea of young blood pushing back against or somehow otherwise reconciling with the perceived stuffiness of royal or other institutions of power is a popular narrative trope, as seen in movies like "Princess Diaries," "What a Girl Wants" and Netflix's "A Christmas Prince" franchise. But save a few snarky tabloid pieces that insinuated the royals found Carole Middleton, Kate's mother, déclassé for chewing gum, there wasn't much indication that there was too much tension associated with the union.

Things began to shift, however, when Prince Harry and Meghan Markle began dating. As Salon's Melanie McFarland wrote, she remembers seeing a magazine cover speculating when the couple would finally get engaged in the grocery store check-out line. The Black woman in line with her said, "You know they're never going to let that happen, right?" she scoffed, and by "they" she meant the British Royal family.

"I reminded her that when the British media coverage of Markle began taking on racist overtones, Kensington Palace took the unusual step of circulating an official statement that came to her defense. 'Please,' my line companion crowed at a fellow sistah's naivete," McFarland wrote. "'That's PR. They have to do that. But when it comes down to it, you watch — they're never going to let that boy marry one of us.'"

The couple did end up getting engaged in 2017 and, inevitably, the Lifetime machine kicked into gear and gave the couple's romance a similar treatment to William and Kate's with the movie "Harry and Meghan: A Royal Romance." However, the otherwise schlocky, feel-good romance had to contend with some of the racism that Meghan had already received at the hands of the British press.

It opted to do so by concluding the film with a completely fabricated scene in which Queen Elizabeth (played by Maggie Sullivan) shows Harry (Murray Fraser) and Meghan (Parisa Fitz-Henley) a portrait of Queen Charlotte; Salon's Hanh Nguyen wrote about it for IndieWire in 2018.

"As they gaze upon it, the Queen says, 'I've always loved this portrait of our ancestor Queen Charlotte because the painter Ramsay didn't try to hide her African heritage,'" she wrote. "Off Harry's startled look, she adds, 'Oh yes, you're of mixed race, Harry. So am I. Many of her portraits tried to hide that fact, but this one is most authentic, much like you.'"

The Queen is addressing Meghan with this last statement of kind inclusivity and acceptance, but ultimately it's as much a piece of fantasy as a fairy tale. In Meghan and Harry's March interview with Oprah, the couple revealed that when Meghan was pregnant with their son, Archie, there were "concerns and conversations about how dark his skin might be when he's born," since Meghan is biracial.

Meghan also told Oprah that the Palace tolerated the ways in which the tabloids incited racism against her. "It was bringing out a part of people that was racist in how it was charged – and that changed the threat, that changed the level of death threats, that changed everything," she said.

Undeterrred, Lifetime has jumped upon a new chapter in the fairy tale by expanding its franchise of films about the royals. "Harry & Meghan: Escaping the Palace" is due out this fall.

The movie, which is still being cast, will "detail Meghan's growing isolation and sadness, their disappointment that 'The Firm' was not defending them against the press's attacks and Harry's fear that history would repeat itself and he would not be able to protect his wife and son from the same forces that caused his mother's untimely death."

I have doubts that the movie's quality will be stellar, but news of its production drives home that, for many, the facade of the "anyone can become a princess" fantasy has been cracked. It now comes with a caveat: Perhaps anyone can be whisked into royalty, but will they be welcome once they get there?