For many royal watchers, allegations of racism have shaken their faith in the Anglophilic fairy tale

"All this fallout is like being told Santa isn’t real,” one fan of the British royal family told Salon 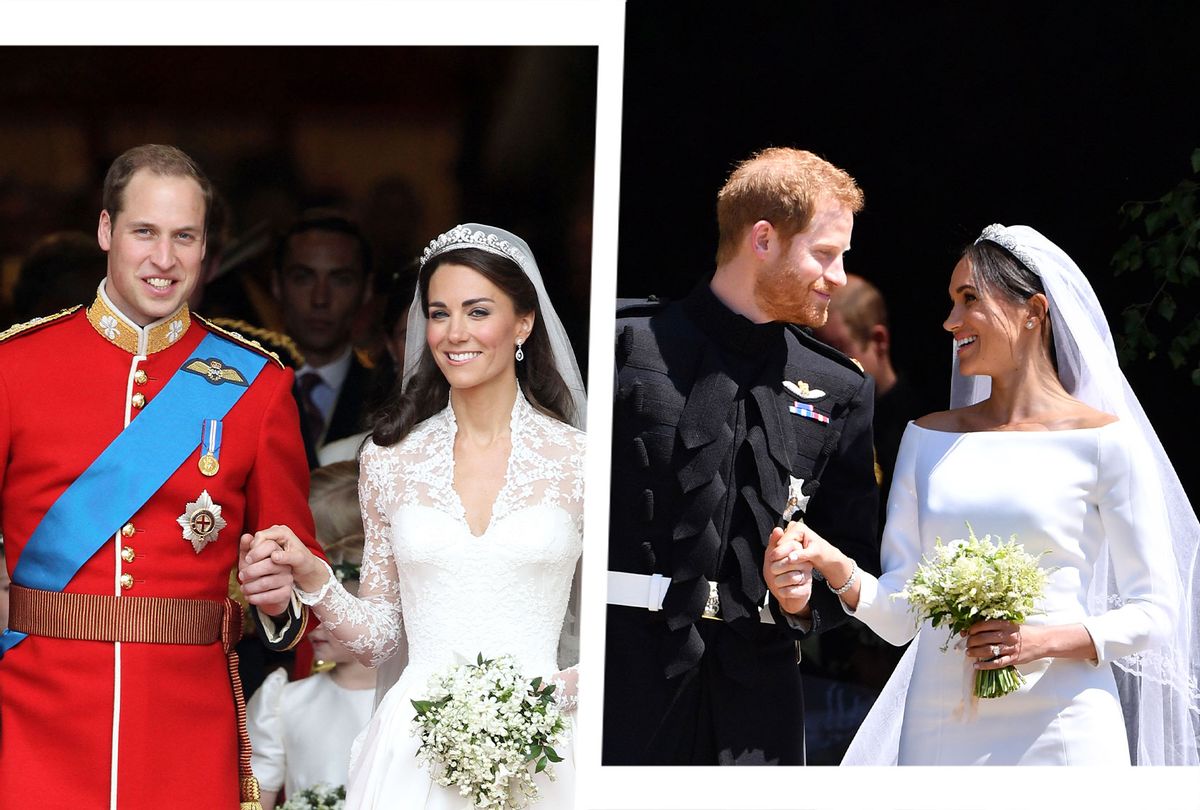 Weddings of Kate and William, and Meghan and Harry (Photo illustration by Salon/Getty Images)
--

While entire swaths of the world were still losing their minds over The Interview — which is what my, and I'm sure many, group chats have dubbed Oprah Winfrey's conversation with Prince Harry and Meghan Markle — I settled in to watch "Get Duked," a 2019 British dark comedy that Amazon Prime had mysteriously pushed into my recommended watchlist (and judging by Twitter, I wasn't the only one for whom that was the case this week).

In it, four teenage boys are dumped in the Scottitsh Highlands to compete for the Duke of Edinburgh award, which is presented as a Boy Scout-esque survival challenge focused on "teamwork, orienteering and foraging." There are, of course, a couple of complications. While one of the boys has thoroughly prepared, the other three are completely ill-equipped for the task, as they spend most of their free time trying to score hash or, in the case of William (Viraj Juneja), launch his hip-hop career as DJ Beatroot.

Early into the boys' journey across the Highlands, they see a figure in the distance who looks a lot like the Duke of Edinburgh, aka Prince Philip (it's Eddie Izzard in a really eerie rubber mask), who shoots at them, then again, all while rambling on about "culling the herd." Eventually the Duke's wife arrives, a rubber-masked "Queen Elizabeth," who tries to behead them with a sword. Then come more murderous aristocrats in masks.

What follows is an hour of escapes, lots of sheep, a trippy music video and a mission to unmask this bizarre royal family. It's an apt, albeit absurdist, metaphor for much of what this last week has been about.

That is, determining who exactly is behind the British royals' almost impenetrable facade in the wake of accusations of racism (concerns about the darkness of baby Archie's skin color) and an assertion from Meghan that, when she asked a senior royal about seeking inpatient mental health treatment due to persistent suicidal thoughts, she was denied because "it wouldn't be good for the institution." For many who view keeping up with the royals as a hobby, especially those based in the United States, the fallout from those revelations has left their fandom deflated, while others are unsure how if or how they'll continue "royal watching."

"I was beginning my gender transition while the world was preparing for Kate and William's wedding in 2011," Jade Ethridge, a self-proclaimed "royal watcher" told Salon. "And I got really swept up in this almost fantasy version of 'femininity' that was being discussed with excitement all over the world."

According to Ethridge, she remembered watching movies like "The Princess Diaries" and "What A Girl Wants" — which both center on American young women discovering that they are actually European royalty or aristocracy — and wishing that she could have a similar realization.

"There are pictures of me where I was 10 or 11 and it looks like, in the photo, a little boy in grubby t-shirts glued to princess movies on the TV set," she said. "But I was really fantasizing about waking up and someone declaring me a princess, something that seemed doubly impossible because of how people perceived me. I just couldn't put it into words at the time what I really wanted."

But as a result, Ethridge developed what she describes as "an obsession-lite" towards the British royal family. She would buy any tabloids she could find that featured stories, even just slim sidebars of a couple hundred words, about Kate Middleton and Prince William's courtship. Her interest was reinvigorated during preparations for Harry and Meghan's wedding. She joined message boards and social media groups to dissect fashion choices and made her own paper dolls to dress in similar outfits. When she had briefly toyed with the idea of doing drag, she contemplated creating a character who was a hybrid between Barbie and Queen Elizabeth.

"I'll admit, I was mostly interested in the superficial," she said. "The clothes, the hats, the handbags. It was fun and fantastic, and there was a sense of community around those things. But the Harry and Meghan interview, that sort of brought me down to earth. A lot of the fashion groups I'm in are trying to ignore the racism stuff and are even banning people for mentioning it, but [the fashion] has lost some of its luster for me and I don't know if it will be fun again."

There are hundreds of social media groups of varying sizes dedicated to various aspects of "royal watching" and at Ethridge's suggestion, I joined several to see how members were responding to the allegations made in the interview. While some, as she said, were keen to ignore any criticism of the royal family — one group, for instance, moved to only posting historic photos related to the monarchy — many were filled with members who were tangled in arguments over who "knows" the royals best.

One person would question the optics of Prince Charles' recent photo op with Black healthcare workers, and another would respond with the 2005 photograph of Prince Harry dressed up as a Nazi. Someone would say that there's no way Prince William could be racist, and then nested in the comments is a photo of him and Kate being carried in thrones by people of color during their 2012 trip to the Solomon Islands. People would trot out old news articles and tabloid spreads that feature members of the British royal family engaging with mental health organizations or mention the royal household's diversity and inclusion initiative for staffing.

In many ways, they mimic celebrity fan groups in the states, though instead of combing through Britney Spears' Instagram captions for messages about her conservatorship or Taylor Swift's lyrics for hints about her personal life, members are picking through tabloid gossip and terse public statements to piece together who they think the royals are.

Mark Landler, a former White House correspondent and Hong Kong bureau chief for The New York Times, began reporting on the British monarchy when he became the London bureau chief in 2019. In a piece for the Times on Friday, he wrote about some of the challenges of covering the royal family, including the opaque nature of the institution.

"The biggest adjustment is understanding that this is not like covering the White House or any other government institution," Landler said. "It is actually more akin to writing about the senior ranks of the Chinese Communist Party, where the machinations play out behind closed doors."

He continued: "It's not as if Queen Elizabeth holds news conferences or invites in reporters for background conversations. Much of the intrigue that dominates royal family coverage comes necessarily second-, third- or even fourth-hand."

As a result, these Facebook fandoms are, by necessity, a breeding ground for rumor and speculation — some of which actually center on potential racism in the royal family. Hannah Zimmerman, a marketing director for an 18th-century farm site just outside Louisville, Ky., said that she stays pretty up-to-date with the royals. She follows their social media accounts and fan accounts, does a weekly check-in on fan blogs, and set alerts on her phone for the arrival of the royal babies.

But, she said, she was "shocked, but not surprised" about Meghan's allegations of racism.

"I was so excited when Meghan joined the Royal Family, and really hoped that her presence would help modernize the BRF [British Royal Family," Zimmerman said. "I believe Harry and Meghan when they say they encountered incredible, devastating obstacles while navigating the last three years, and it was disheartening to have some of the internal whispers confirmed."

She said the interview gave her a lot to think about in terms of the royals and the way she engages with them as an American fan.

"I think going forward my interest in them will still be there, but I want to make sure I'm thinking critically about them and holding them accountable for what they say and do like I would anyone else," she said.

Catherine Brereton, a British expat who has been living in the United States for years, said that the controversy over the interview has caused her to feel like a "chunk of [her] childhood has been destroyed."

"As a child, I loved the royals — most children do, to be honest," she said. "And certainly in the '70s, '80s, and '90s — the Diana Days — the Royals were beyond popular. I have all kinds of paraphernalia from those days. I had a Princess Diana waste bin in my bedroom, for goodness sake."

She said that while she no longer has that blind love for the royals, and even agrees with the criticisms, "all this fallout is like being told Santa isn't real," which brings sadness for her, and she imagines for the Queen, as well.

"After all, this is her family, and I think that gets forgotten," she said. "And sadness for the divisions that are only exacerbated by this. Nothing is healed, and I feel that we're further from healing for anyone — most especially Meghan and Harry"