As a child, I desperately needed language, stories and role models to help me to understand and celebrate myself 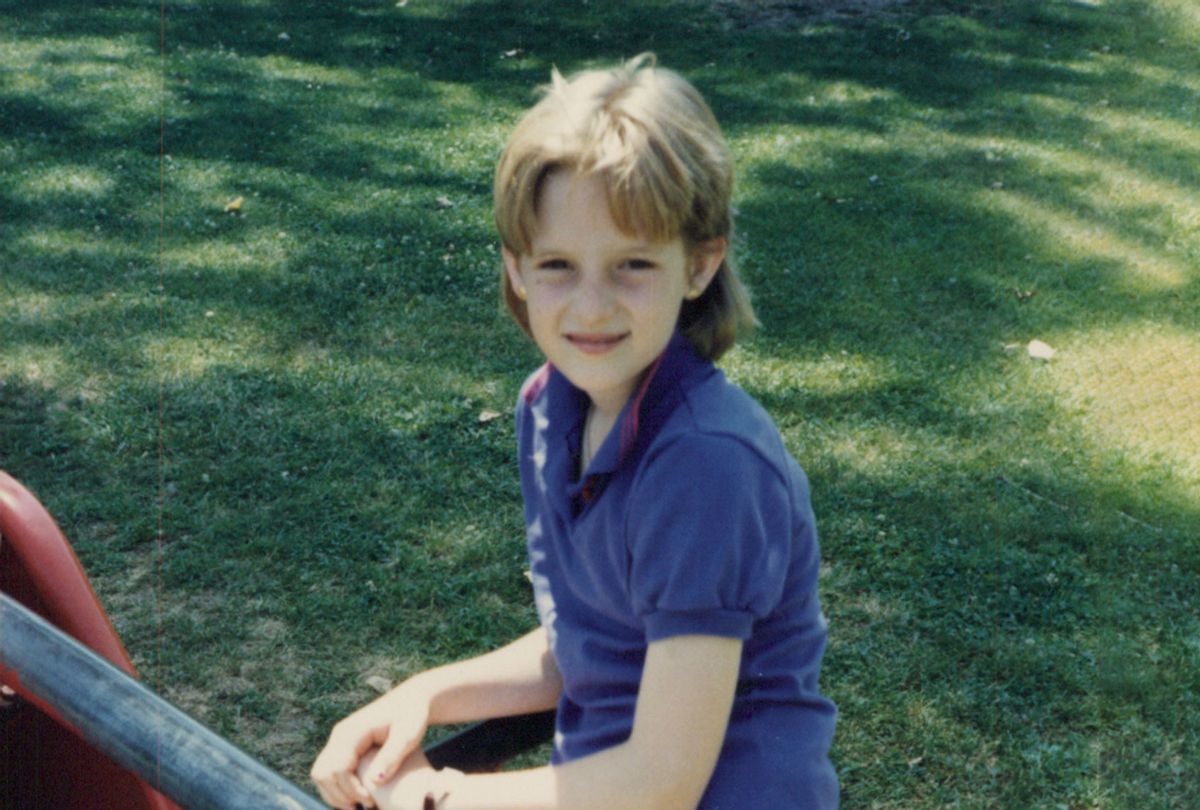 Maria on "Sesame Street" was my first crush. I didn't call it a crush at the time, of course, because I was only four or five years old. All I knew was my innocent and organic response to seeing her on the television set. My heart would lift, a grin would come upon my little face, and my attention would focus specifically on her, no matter which Muppet or other actor was also on screen.

Crushes on various women continued throughout my childhood and grew more intense. It wasn't until I was 10 that I thought something was really wrong with me. Because, well, I was a Catholic school kid in Louisville, Kentucky, in Reagan's America, where romance and coupledom were synonymous with a straight, male/female dynamic. My special feelings were not reflected anywhere outside of me. There were no out lesbians in my neighborhood, in my family, in my church, in the shows I was watching, in the books I was reading, in the romantic lyrics to any pop song, or in the class lesson on "sex and family life." It was a complete and total void. I didn't know that I was gay because I didn't know what gay was. I didn't know that gay existed.

With no context for my special feelings, my self-protective instinct kept those feelings carefully hidden away. I came to the conclusion that I would never have the opportunity to express or understand them really. I was all alone, as it were, in a secret closet.

It was the first time that my secret, special feelings were given a context, were named.

One afternoon in sixth grade, my teacher — I'll call her Miss Carter — instructed the class to silently read a chapter in our Social Studies textbook. The room quieted and I began to read and yawn along with my peers. But then I got to a paragraph that jolted me awake. It was about how the particular culture we were studying was something called "polygamist," which was described as women living together and raising children together, separate from men. I read the paragraph over and over, swallowing hard. It was the first time that my secret, special feelings were given a context, were named.

A thrill ran through my body as I imagined a family unit with only women at the helm. That's what my heart wanted! Could it be that I would grow up to be a polygamist? Was that the word that could finally explain my confusing feelings? I glanced around the room, wondering if anyone else was having a life-altering epiphany in social studies class. But, no, all the other kids were still yawning their way through the chapter.

Around that same time, I noticed a thick band of gold on Miss Carter's ring finger. This was Catholic school and the delineation between who was a "Miss" and who was a "Mrs" was crystal clear, so the ring perplexed me. It didn't look like a regular wedding ring but it was, most definitely, on that finger. I got enough gumption to ask another teacher why Miss Carter wore that ring. The other teacher's eyes grew wide. In a hushed panic, she said, "Miss Carter's husband died in a terrible car accident! Don't ever ask her about it! She doesn't want anyone to know!"

So there I sat in my sixth grade classroom thinking that I was a polygamist, that Miss Carter was a secret widow, and that certain questions made grown-ups really jumpy so I'd better not ask them.

My uncle was a gay adult in my own family who was hiding in plain sight. He was considered a bachelor, showing up alone to every event and gathering. His "roommate" Paul was conveniently absent whenever we visited their home. I remember one day, when my uncle was showing us around his new condo, he pointed to what looked like a guest room and said quickly, "That's Paul's room." I could sense that he was uncomfortable talking about his roommate but I didn't know why.

RELATED: The all of "y'all": On finally embracing my voice, country twang and everything

The first person I knew to be gay was Boy George. A friend of mine told me, while we were binging on MTV, that the pop star liked to kiss other boys. I remember thinking that was interesting but I never related it to my special feelings. It didn't occur to me that I had anything in common with Boy George.

In eighth grade, my world got a little bigger. My liberal parents decided that we should, as a family, move from a conservative Catholic church to a rather unconventional Catholic church across town. This new parish was quite active in social justice movements of all kinds. It even had gay parishioners! I remember meeting lesbians there for the first time, which sent my internalized homophobia into overdrive.

I was acutely aware of my secret, special feelings — I still didn't call them crushes — and I was sure that I was not a lesbian.

My brain did some serious compartmentalizing back then. I was acutely aware of my secret, special feelings — I still didn't call them crushes — and I was sure that I was not a lesbian. Because, as sweet and dear as the women at church were, I didn't identify with them at all.

Those five or six women, who sat together in the corner during mass, were the first lesbians to enter my space-time reality. So, in my adolescent mind, they came to represent All Lesbians Everywhere. Glancing over at them during mass, my first associations with and observations of lesbianism, I admit, came from a place of fear and judgment:

I didn't aspire to or fit any of those attributes. At age 14, I identified as someone who was outgoing and well-liked. I perceived myself to be someone who belonged everywhere I went. I was already planning to be an actress and a mom when I grew up. And I knew, for sure, that actresses and moms were straight. And, even with the usual adolescent insecurity, I wanted to be pretty in a conventional way. I liked my long blonde hair and the eyeliner I carried in my purse. Sure, I had a mysterious attraction to certain women, but those certain women and I were nothing like the lesbians at church, I thought. So how could I be one of them?

I was also, in my early teen years, wildly in love with the idea of being in love with a man. Pop culture did some amazing propaganda on that front. It was All Straight All The Time. I had been inducted into the pervasive belief that straight equated with normal. Of course I wanted to be normal, so I tried convincing myself that I was.

A childhood spent in the Gay Void had infected me with a huge amount of shame.

It wasn't until I was 19 that I first dated a girl. I went on to stand in the closet doorway for another three years before officially coming out (to myself, to my parents) at  22. Even with the incredible support of friends and family, the whole experience was terrifying. A childhood spent in the Gay Void had infected me with a huge amount of shame.

When I reflect back on that delicate time of young adulthood, I can see that there was one particular event that gave me the courage to finally accept myself as a gay person. It was when Ellen Degeneres came out, both in real life and as a character on TV.

I bought the Time magazine with her on the cover that said simply, "Yep, I'm gay." I got a VHS cassette and taped the Diane Sawyer interview, the Oprah interview, and "The Puppy Episode" itself. I devoured them. That magazine and VHS cassette were instant treasures, arming me with the courage to go into battle with my shame.

Now, here we are 25 years later with this damn "Don't Say Gay" bill. According to legislators in Florida, conversations about gender identity and sexual orientation are "not age appropriate or developmentally appropriate" for children. In actuality, what's inappropriate for and harmful to children are the homophobia, transphobia and ignorance that spew forth from the bill and its supporters.

Homophobes tend to think of being gay as a behavior, as a sexual act only. They compare it to the sin of adultery and, therefore, want to keep it in the realm of grown-ups. I understand that detailed conversations about sexual acts (hetero, homo or otherwise) are not appropriate for young children. However, conversations about feelings, love, identity, diversity and self-expression are absolutely appropriate and necessary.

As a kid, my feelings for women weren't sexual. They were emotional, energetic and loving. They were intense and they were real. I'm willing to bet that my straight peers had those same feelings for guys during their childhoods. But those little straight girls didn't have to endure the trauma of a Straight Void. Their innocent feelings were easily expressed and accepted all along. I mean, my sister didn't have to, at age 22, painfully confess to our parents that she was attracted to men. Isn't the very notion of that absurd?

My straight parents were completely accepting of me when I came out. I'm one of the lucky ones. But they were deeply saddened, too. Learning that I had endured and hidden so much emotional pain for years was difficult for them. It still is. But they had grown up and lived in the Gay Void, too! How could it have occurred to them that their kid was gay?

Denying that LGBTQ+ folks exist, and have always existed in the human family, is harmful to us all.

Denying that LGBTQ+ folks exist, and have always existed in the human family, is harmful to us all. As a child, I desperately needed language, stories and role models that could help me to understand and celebrate who I was. My straight parents needed that too. We needed for society at large (our shared culture and communities) to show us that the gay part of me was as normal and natural and beautiful as my brown eyes.

To the closeted adults in my childhood, to the lesbians at church, and to my little kid self, I see you and I admire you.

To the children of Florida, I proudly and joyously say, "Gay."

And, to Maria on "Sesame Street:" Thanks for being my very first crush.

Elizabeth Morton is an actor and writer who lives in New York.