Your salt and pepper shakers have a surprisingly spicy history

While often viewed as novelty items, the shakers are the product of design innovation and some chemistry know-how 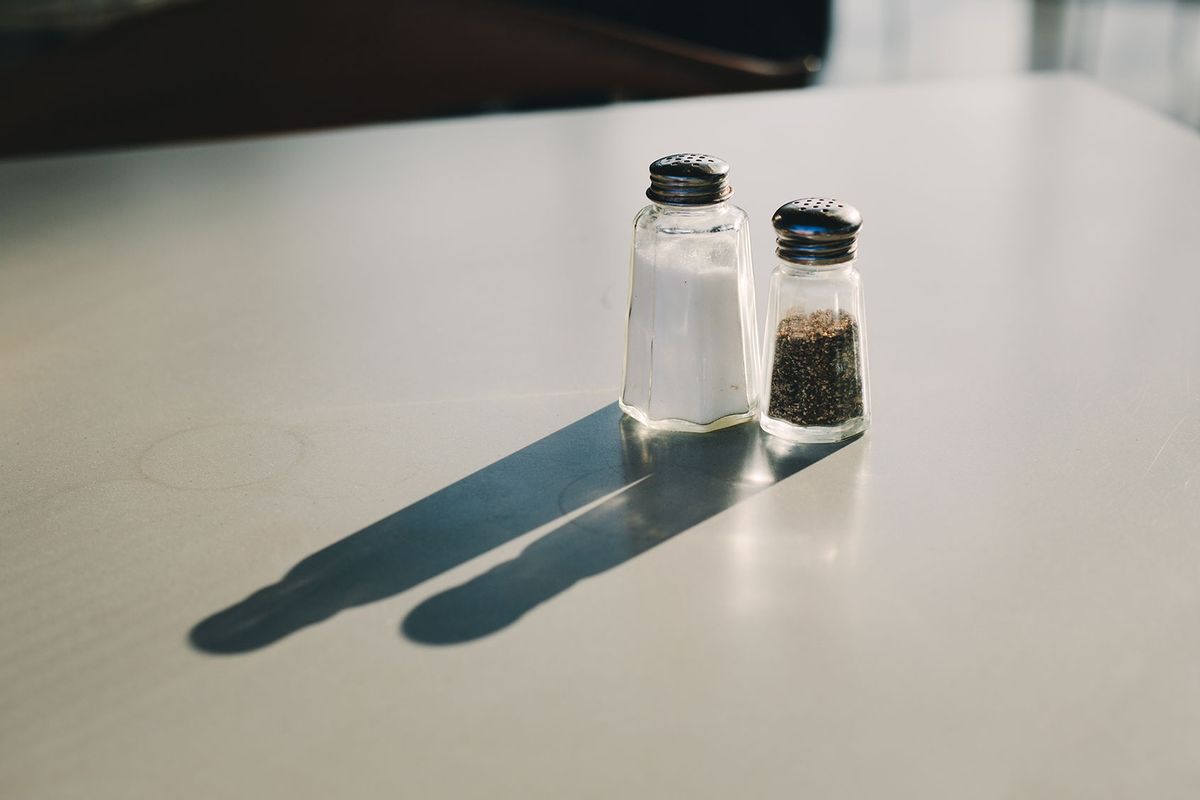 The world of kitchen tools is immensely diverse. From spatulas and whisks to air fryers and crockpots, there is no "one size fits all" when it comes to the breadth of kitchen tools, their uses and their designs. How, then, would tools such as salt and pepper shakers be defined? They're not merely decorative and they have a function beyond aesthetic appeal, so they do qualify as a "tool," but would one ever equate salt and pepper shakers and Instant Pots in the same breath?

Related: The (cheap) tools that will transform your cooking in 2022

That said, for some, shaking a bit of salt and pepper onto your meal may be a bit of an insult. It's essentially like saying to the cook, "Sorry, but this isn't to my liking. Let me improve it myself." Similarly, at a restaurant, a diner should feel secure in the seasoning prowess of the chef and the kitchen. After all, you're paying for your food to be cooked, so you should expect a proper seasoning deftness. Still, the presence of salt and pepper shakers remains a mainstay on most kitching and dining room tables.

Taking all of this into consideration – how did the salt and pepper shaker set originate? Did it once pose more of a functionality in actual cookery than it does now? Is the functionality of salt and pepper shakers now outweighed by their aesthetic or nostalgic appeal? If so, does it primarily offer a decorative element in the vein of a fun seasonal item, a holiday standby, a wedding favor — or does it manage to encompass all of the above?

It is thought that John Mason — also the originator of the mason jar — invented the shakers in the mid-1800s, as noted by Ten Random Facts, but the shakers didn't become widespread and manufactured until the 1920s. Mason's original invention was idealized to "hold salt that would [be] evenly distributed ... on food, by shaking it through several holes punched into a tin cap," as noted by Our Everyday Life. However, this ingenuity didn't really take shape until after Morton added magnesium carbonate to salt in order to ensure a free-flowing pour. Smithsonian notes that one of the first "fine quality" shakers was created in the early 1920s by a German pottery manufacturer named Goebel.

Hundreds of years ago, salting your food was a laborious process: salt was typically kept in a cellar and broken off in large clumps before being sprinkled over dishes. Soon after, salt began to be collected in small bowls and placed on the table with a spoon, which also added a customizable element to a meal. You could effectively "salt to taste." As previously noted, Morton Salt then, per the Smithsonian, "introduced magnesium carbonate ... which prevented caking and made it possible to pour salt from a sealed container." This changed the future of salt and allowed for a shelf-stable, consistently reliable product that wouldn't become lumpy or unappealing over time.

Hundreds of years ago, salting your food was a laborious process: salt was typically kept in a cellar and broken off in large clumps before being sprinkled over dishes.

Journal of Antiques notes that salt shakers once contained a block of sorts that was used to mill or break the salt into pieces in the case that it clumped. After Morton's discovery, this piece was removed, and as modern ceramics became more and more widespread and common, the shakers boomed in popularity — eventually becoming the collectible, souvenir, favor or hand-me-downs that they are today.

Brass Armadillo, a Des Moines-based antique mall, states that the shakers were initially ubiquitous throughout restaurant kitchens and hardly ever seen in a home kitchen after first being developed. Salt and pepper shakers soon became a go-to souvenir option for many families. It doesn't hurt that they tend to be very economical (amongst fervent collectors, though, it is said that certain high-quality, unique, or vintage shakers can sell for exorbitant amounts!).

As Smithsonian notes, the majority of saltshakers contain one hole, while pepper shakers tend to have two or three. Interestingly, Smithsonian also states that "it was the Great Depression ... that gave a major boost to the popularity of salt and pepper shakers as both a household and collectible item," perhaps due to the fact that most were made of ceramic and were very affordable.

Of course, salt is arguably the single most important ingredient in any dish. It bolsters flavors that otherwise lie dormant, it adds a salinity that permeates, it heightens the flavors of other complementary ingredients, and it helps to deepen the taste in any dish — both savory and sweet. In addition to seasoning food, salt also plays a significant role in brining and preserving foods, which was paramount in the days prior to refrigeration.

This video from BBC Ideas notes that salt is "essential for life and has been used since prehistoric times," noting that it's "one of the earliest food industries and one of the most important commodities in the world." (Fun etymology note: the Roman word 'sal' for salt is also the base of salary and salad, which are both said to have been named in conjunction with salt.)

Salt is arguably the single most important ingredient in any dish.

The History Vault dates salt production and consumption to 450 BC in China, while pepper originated in India has been "exported from South Asia for about 4000 years." Prior to shakers and grinders, pepper was prepared in a mortar and pestle prior to being served or used in cooking. There is also a thought that excessive seasoning was used to "disguise the flavor of rancid meat" in pre-refrigeration times, as unappetizing as that sounds.

NPR notes that salt was once incorporated into a meal at the table in a unique manner: a meat carver — known as a trinciante — would carve meat, letting the meat slices fall onto the plates of each diner, and would then "dip the end of the knife in salt and scrape it onto the diner's plate," according to NPR. Fascinating, but this clearly required quite a bit of labor. The invention of the shaker helped to make seasoning an individual, simple task.

The importance of pepper

Peppermate notes that the pepper grinder "was invented by Peugeot of France in 1842." Peppercorn is said to have helped "delineate between sweet and savory," and was often used in tandem with salt - and rarely with any other spices or seasonings - to add a refined, heightened flavor to dishes.

Varieties of pepper, such as cayenne, were also used, but not as commonly. Morton's invention of "easy flow" salt helped to influence the development of today's shakers, which only require a simple flick of the wrist to spruce up your foods, as opposed to sparingly sprinkling salt crystals from a spoon or tip of knife. Peppermills did replace shakers in some cases, especially as time has gone on, and with increased recipes calling for "freshly ground black pepper" (via BBC Foods).

BBC Foods also interestingly notes that pepper began to become known as "melancholy" spice, so many were opting to enjoy "more sanguine" spices instead — until myriad French chefs began to incorporate black pepper into a swath of classic French dishes, and this inclusion began to permeate the culinary world at large.

Pepper is always best when freshly ground. When dried and ground, the pungency begins to dissipate, so a freshly ground cranking results in sharp, pungent notes of pepper, which is why "freshly ground black pepper" is a nomenclature that caught on with such fervor.

While some view "salt and pepper" as a package deal, it is important to note that they are inherently different ingredients — salt is something that can (and should) be added to practically anything, whereas pepper can add a strong note and sharpness that wouldn't be very welcome in a large swath of dishes. Of course, this didn't stop "salt and pepper shakers" from being marketed as a two-in-one item or set. Furthermore, it's also important to note that a "pepper shaker" and a pepper mill or grinder are two very separate items.

Modernity — and what's to come

Did you know that there's even a salt and pepper museum located in Tennessee — and that it boasts over 20,000 pairs of shakers? According to Wide Open Eats, the museum was opened in order "to display the societal changes represented in salt and pepper shakers." Smithsonian notes that the collection includes "fat chefs, ruby red tomatoes, guardsmen in bear skins, Santa's feet sticking from a chimney, pistols and potatoes..." and many, many more.

Nowadays, shakers have been modernized. There are electric peppermills, as well as specialty saltshakers with grinding features. Also, the sheer number of salt and pepper products has grown increasingly, which adds yet another element to the shaker discourse. For many, though, the reliable, ceramic standbys are unbeatable.

The longevity of salt and pepper shakers is yet to be seen, but I'd be comforted by the notion of my relatives' centuries in the future feasting on a robust Thanksgiving meal, complete with matching turkey shakers in a starring role on the Holiday tablescape. I grew up with those familiar, nostalgic shakers, and whether your table is festooned with turkeys, Santas, snowmen, or whatever ceramic delight is customary in your family. They are clearly much more than merely a vessel for seasoning. A nostalgic relic, salt and pepper shakers are part functional tool, part antique, and part souvenir, encompassing each realm fully.

I can only hope that ornate, decorative, or even absurdist shakers — both holiday-themed and not — will continue to hold a special place on the dining room and kitchen tables of the future.

More of our favorite kitchen gear: