What it’s like tripping on mad honey, the hallucinogen that (maybe) is an aphrodisiac 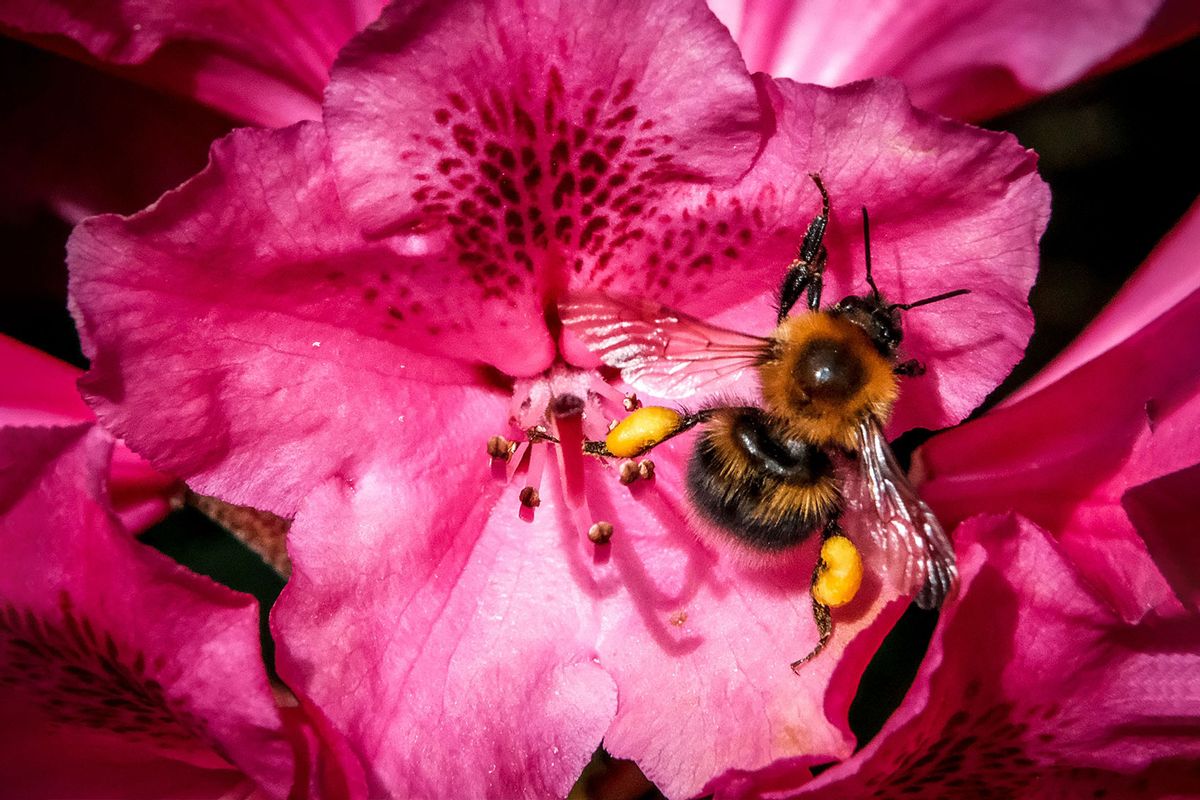 A bumblebee collects pollen from a rhododendron flower in a garden outside Moscow on June 1, 2021. (YURI KADOBNOV/AFP via Getty Images)
--

"Don't eat two big spoons of mad honey a day," read the awkward warning on the side of the jar. But by the time I read it, I had already gulped down three. Like most honey, it was predictably sweet, but with a faint smoky flavour that burnt the throat and the tongue. Unlike most honey, consuming it would lead to visions, vomiting and horrific diarrhea.

Mad honey, or deli bal as it's known in Turkish, is one of the most expensive honeys in the world — and the deadliest. A couple of spoonfuls of mad honey, either on their own or with hot water or boiled milk, are enough to induce a mildly psychotropic sensation. At least, that's how it's advertised. Mad honey's psychotropic effects are not well-documented on the Anglophone side of the internet; trip reports on Erowid, the online psychonauts' Bible, are sparse.

I picked up two jars from the Grand Bazaar in Istanbul, an ancient marketplace of kiosks selling carpets, caviar, old Ottoman daggers and scimitars, spices, trinkets and antiques. One can find deals here, but tourists like me are also apt to be ripped off. Hence, just to be safe, I bought two small jars from two different merchants, and watched carefully from where they poured the sweet sticky stuff.

I ended up in Istanbul because of war. At the start of the year I was working on an article about Russian mushrooms that make you trip for eight hours and think you died as many times in a row. Thanks to Vladimir Putin starting a nightmarish, fratricidal war with our neighbor, Ukraine, that would have to wait. As a journalist I had to get the hell out, and so I joined the Russian exodus to Istanbul.

When the Greeks under King Mithridates were retreating from Roman general Pompey the Great in 97 BC, Mithridates ordered his men to lay pots of honey as they made their tactical withdrawal. The Roman soldiers couldn't help themselves and pigged out until they couldn't move, leaving them easy for the slaughter.

The ancient Greek commander and historian Xenophon (434–354 BCE) mentioned a disease afflicting his men with delirium, vomiting, and diarrhoea while they retreated from the Persians on Anatolia's Black Sea coast. Later, when the Greeks under King Mithridates were retreating from Roman general Pompey the Great in 97 BC, Mithridates ordered his men to lay pots of honey as they made their tactical withdrawal. The Roman soldiers couldn't help themselves and pigged out until they couldn't move, leaving them easy for the slaughter.

Mad honey is still gathered by beekeepers braving forests full of bears in the Kaçkar mountains above the Black Sea in Turkey. There, native species of rhododendron flowers produce a potent neurotoxin called grayanotoxin, which can affect the nerves, heart and respiratory system. If bees feed on enough rhododendron nectar, the mud-red honey they produce is said to have a sharp scent, bitter taste and a trippy high.

"Grayanotoxin (GTX) is present in rhododendron forest rose leaves and flowers that grow in the damp forests that along the Black Sea coast, in the eastern parts of the Black Sea Region of Turkey," Dr Özgür Tatlı at the Department of Emergency Medicine of Karadeniz Technical University in Trabzon, Turkey, told me in an email. "Also, there are reports from different parts of the world such as Portugal, Spain, Brazil, Japan, Nepal and the USA. Mad honey production in rural areas is still done by traditional methods in these regions. The fact that it is more pure and not mixed with other honey causes this sensation."

Aside from Turkey, a substantial portion of mad honey is produced in Nepal, where the rhododendron flowers grow; there, it is traditionally used by the Gurung people in the Annapurna foothills, and the Kulung people in the remote eastern mountains, as a cough syrup, pain reliever and an antiseptic. Twice a year, honey hunters scale mountain peaks to gather the narcotic nectar from the nests of Himalayan giant honeybees on rickety ropes and bamboo ladders, lighting fires to ward off the bees. It's dangerous work, but it's a custom dating back generations, and for the poverty-stricken hunters the best way of earning a living. The honey and beeswax is sold in the markets of the faraway capital Kathmandu, or exported abroad. In the early 2000s, South Koreans grew fond of the Nepalese honey as an aphrodisiac. But in 2005, someone ate too much and died, and the honey was declared contraband.

A middle-aged customer I meet in the honey store attests to mad honey's curative properties: "I'm buying two kilos: it's good for everything, good for sex!" he says.

"Mad honey is consumed as an alternative medicine for the treatment of stomach pain, intestinal disorders, hypertension and sexual dysfunction," Dr Tatlı explained.

Its medicinal use in Turkey dates back to 2100 BC, and is usually consumed just before breakfast as a traditional remedy for impotence and hypertension. A middle-aged customer I meet in the honey store attests to mad honey's curative properties: "I'm buying two kilos: it's good for everything, good for sex!" he says, carrying away two massive jars of deli bal.

Mad honey's arousing effects are why older and middle-aged men slurp the sensuous sap, and one reason why they are the most at-risk for grayanotoxin poisoning. (Unfortunately I am single, so I will have to test mad honey's purported amorous effects another time.)

And what does grayanotoxin poisoning feel like? At first you'd feel nausea, dizziness, confusion and a feeling of being about to faint. More side-effects include nausea, numbness, itching in the mouth and nose, reddening of eyes and skin, headache, vertigo, cramp-like stomach pain, vomiting, blurred vision or temporary blindness, potent hallucinations, seizures, delirium, hypotension, deep bradycardia gastroenteritis, weakness, fainting, "possibly" a coma and even hypotension leading to death. The unpleasant experience can last up to a day, and treated with saline infusion. Fatal doses are rare, especially from commercial-grade honey where the level of toxins is diluted, but do occasionally happen. The majority of poisoning cases happen in Turkey.

"Patients do not generally go to hospital when this occurs and use treatments based on local customs, such as resting and eating salty yoghurt," said Dr Tatlı. "Such patients generally recover within a few hours. Mortality rates are very low in these cases."

The subtle effects set in a few minutes after consuming the mad honey. I thought I could feel a gentle euphoria, a relaxing, slightly "out there" buzz, and a light-headedness not unlike smoking pot.

I couldn't tell if I were high or if it were a placebo effect. Given the price — one kilo is 3,500 lira (approx. $235) — I really wanted it to work. You know, like when you smoked banana peels when you were a kid and convinced yourself, "yes — yes, it's definitely kicking in now!"

I was not some naïve mad honey-buyer: I looked up one of the merchants before dropping in and he seemed legit. But as Dr Tatlı said, the purest stuff is found at the source, in the Kaçkar mountains. Perhaps one or both of my jars was diluted, in the same way that a drug dealer cuts his drugs with benign substances to save money.

So the following night, I tried once more. This time, I mixed a couple of spoonfuls with my tea. A light, gently pleasant buzz flowed over my whole body. I felt slightly dizzy and relaxed, and had a mild sense of lightness and euphoria, even though my head felt a little heavy. Feeling lazy, I didn't want to stand up from my chair, and things did seem slightly slower and dreamlike. But even though by now I'd eaten more than half the jar, there were no hallucinations so far — unless I'm hallucinating that I'm getting fat.

So that's it, I guess. Don't expect to hear about mad honey on Fox News as the latest party drug that's killing YOUR kids. It really is just an expensive thing middle-aged men put in their breakfasts for their jollies — not an exotic intoxicant you're going to take at Burning Man.

Having said that, grayanotoxin poisoning, though rare, is no joke, so I asked Dr Tatlı for advice.

"First of all, don't try to stand up because of probably hypotension, and call the ambulance. You have to tell the doctor you consumed mad honey, and as with other such toxins, treatment with intravenous atropine and a normal saline infusion can be life-saving in this poisoning."

Read more on drugs and the brain: