There are no moderate Republicans: Greg Abbott, Glenn Youngkin and GOP self-immolation 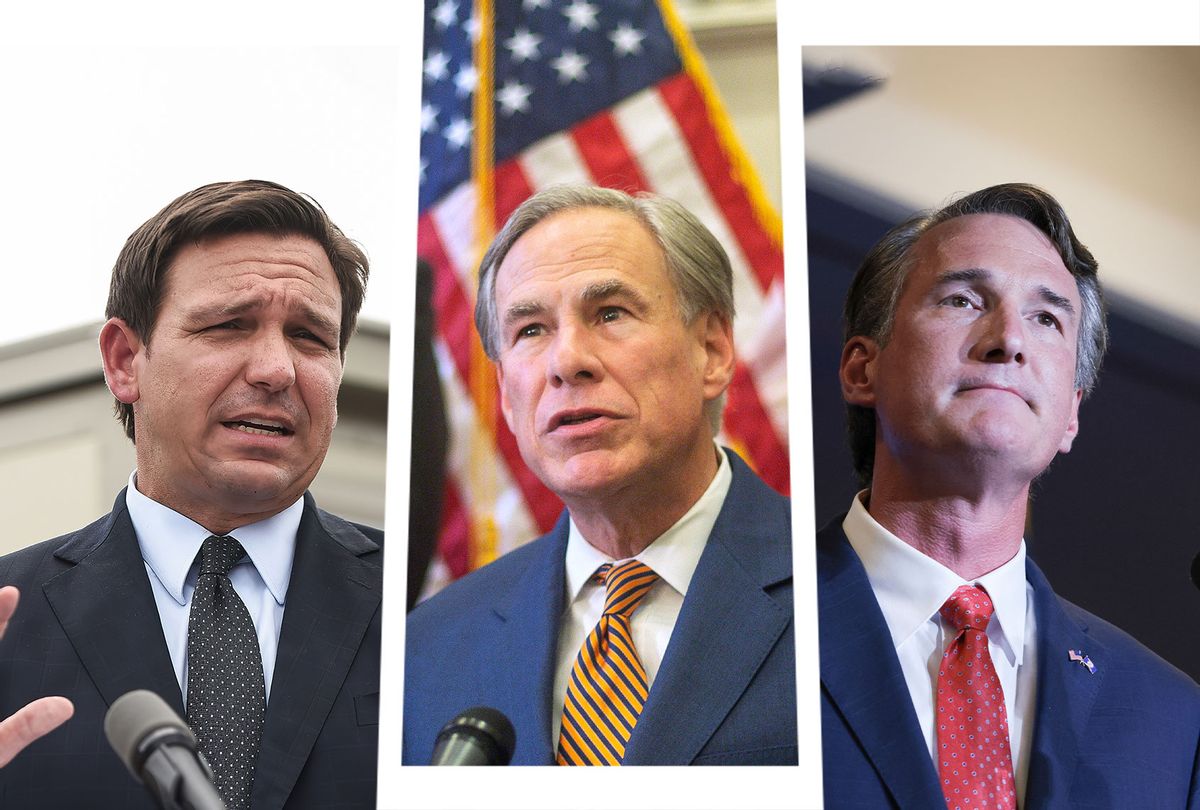 Texas Gov. Greg Abbott's latest attempt to garner national attention and trigger the libs was always likely to blow up in his face. Now it's apparent that Abbott's effort to one-up fellow Republican Gov. Ron DeSantis went a bit too far — seemingly upsetting everyone from Customs and Border Patrol (CPB) to truckers to the Trump-supported agriculture commissioner in Texas.

Abbott "is taking actions to move migrants without adequately coordinating with the federal government and local border communities," said CBP chief Chris Magnus said this week, after the governor's pointless and sadistic decision to bus newly arrived migrants all the way from Texas to the front steps of Fox News' Washington, D.C., studio.

As Amanda Marcotte points out in today's edition of her Standing Room Only newsletter, the basic premise behind Abbott's political stunt was that ordinary people in the nation's capital and other "sanctuary" states or cities would be horrified by the idea of immigrants arriving where they live. In other words, it reflects a deep-seated belief that everyone is xenophobic deep down inside.

Yet somehow Abbott managed to anger the Border Patrol twice in one week.

The CPB, along with the Texas Trucking Association, which recently endorsed Abbott for reelection, has also spoken out against Abbott's decision this week to introduce lengthy new inspections for commercial trucks crossing the border from Mexico. That too was a stunt, built around the claim that the Biden administration has an "open-border" policy and is permitting illegal drugs and human traffickers to flow into the country unrestricted.

The entirely predictable result was massive delays for trucks loaded with legitimate imports from Mexico, which is the source of much of the fresh produce Americans consume every day, along with numerous other products. "The current situation on the border simply cannot be sustained," the Texas trade group said in a statement, calling on an end to Abbott's blockade before the "economy endures further irreparable damage."

Which was pretty much the whole point of Abbott's stunt in the first place.

As Sid Miller, the Trump-endorsed Texas agriculture commissioner, explained, Abbott's truck inspections "stopping food from getting to grocery store shelves and, in many cases, causing food to rot in trucks." Some truckers arriving from Mexico told the El Paso Times they had experienced more than 10-hour waits thanks to Abbott's policy. Further east at larger border crossings, the wait has reportedly exceeded 24 hours.

It's not a stretch to argue Abbott is deliberately backing up the supply chain at crucial choke points so that inflation is made even worse ahead of the midterm elections — and he doesn't appear to care about the collateral damage to truckers, grocery workers, consumers or the overall economy.

Of course American truckers are a diverse group, but many cherish their reputations as mavericks and their long association with conservative politics. In 2020, Bloomberg News found that truckers were among the occupations most likely to donate to Donald Trump, which was not a huge surprise. Just last month, truckers were hailed by the likes of Texas Republican Sen. Ted Cruz as the working heroes of America, after groups of truckers led right-wing demonstrations both in the U.S. and (far more effectively) in Canada. The Texas Trucking Association's endorsement of Abbott, came only two months ago. Now, after spending the early months of 2022 egging on truckers' unruly political demonstrations, Republicans are suddenly silent about the damage Abbott's stunt is causing both individual truckers and their entire industry. Go figure.

There's a pattern at work here: Greg Abbott used to be a "mainstream" Republican, at least in comparative terms. But like so many other figures in his party, he's joined a race to the bottom — haunted by the shadow of Donald Trump's impending 2024 campaign — in which Republicans are willingly harming their own base.

Glenn Youngkin ran as a moderate, more or less. Now he wants to re-criminalize marijuana and runs a snitch line for people to report teachers who address "divisive subjects."

For another example, consider Virginia Gov. Glenn Youngkin, who this week vetoed dozens of bills passed in bipartisan fashion — including a three-year statute of limitations on the collection of medical debt — purely as revenge on Democrats in the state legislature. Youngkin, who ran as an approximate moderate and kept his distance from Trump, is now recommending increased criminal penalties for marijuana possession after pledging during his campaign to not roll back marijuana legalization in the commonwealth. Meanwhile, his administration is fighting to keep secret the calls to a state hotline where people can snitch on teachers who teach "divisive subjects" in public schools.

Youngkin was elected last year almost entirely because 800,000 fewer people showed up to vote for Terry McAuliffe, his Democratic opponent, than had voted for Joe Biden a year earlier. In Florida, fewer than 33,000 votes gave Ron DeSantis the governorship, yet that hasn't stopped him from doing his utmost to write Democrats out of existence in the Sunshine State. Far from governing as the moderate bridge-builder such a narrow victory might portend, DeSantis has led Republicans in passing anti-CRT, anti-LGBTQ, anti-abortion and anti-free speech legislation. He has even wrested control of the redistricting process away from Republican state legislators to draw his own electoral maps.

RELATED: Trump 2.0: Ron DeSantis is the future of the Republican Party

There's nothing new here. This is the Republican playbook: Win at all costs and by any means necessary, and then govern as a radical — even if it means sacrificing your own base. Then rewrite the rules to make sure you can't lose.

Recall that Republicans were caught cheating on every level this week, from Trump supporters in The Villages, an upscale retirement community in Florida, to a former Trump aide running for Congress in New Hampshire to Trump's former chief of staff, Mark Meadows, who apparently registered to vote at a remote rural trailer home he had never even visited.

This week the Republican National Committee also announced that it plans to withdraw from presidential debates, after not even bothering to write or present an official party platform in 2020. That makes perfect sense, if we consider that the point of a debate is to persuade undecided or wavering voters that they should vote for you. That's got nothing to do with Republican political strategy, which hinges upon turning out the party faithful in ever-greater percentages, while suppressing the vote on the other side. It's absolutely not in their interests to subject candidates to a debate, where they're likely to be called out for grotesque lies and distortions. If you can't answer questions from the moderators, then the most logical choice is to not allow the moderators to ask the questions.

At this point, the big question concerning the 2024 Republican presidential primaries is whether they will happen at all, or whether the entire party will once again prostrate itself before the greatness of Donald Trump. It would be nice to believe that such a craven display would doom them to defeat, but that's hardly a sure thing.

Read more on the wonders and delights of the Grand Old Party: