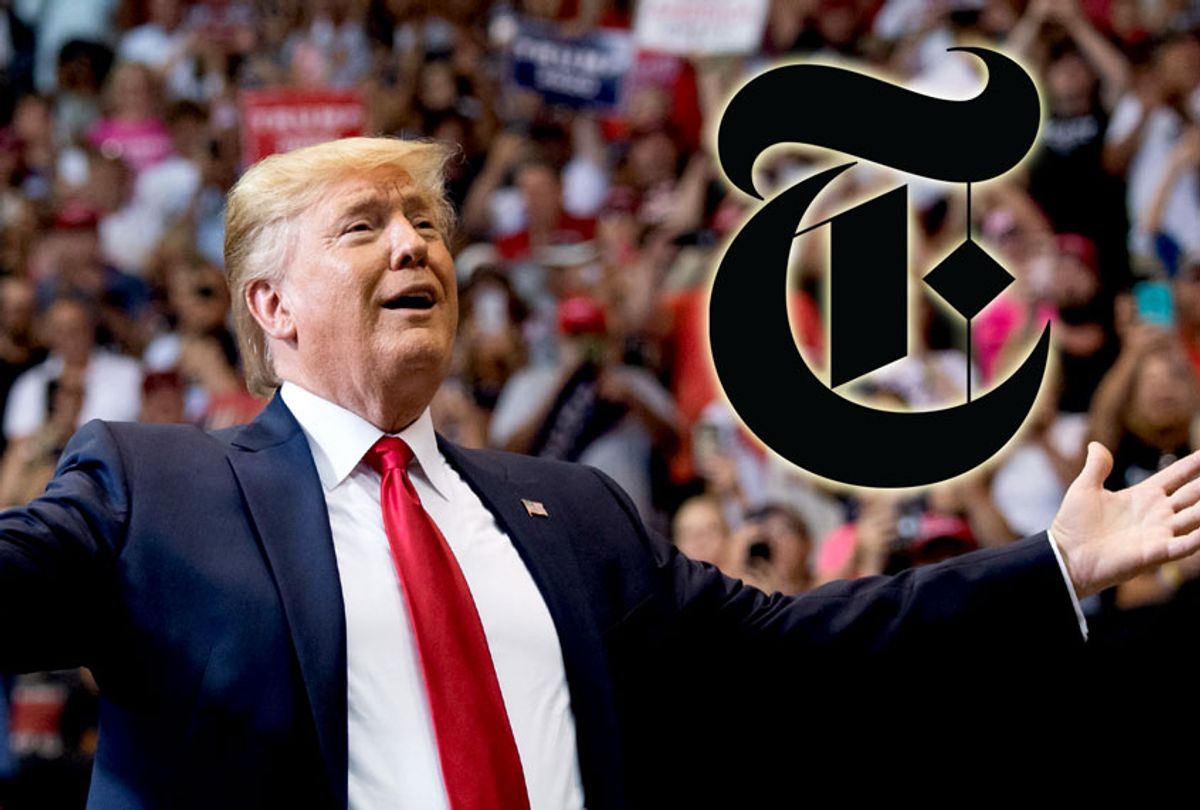 As the 2022 midterms get underway, Democrats and Republicans are both canvassing communities and responding to what voters have to say. Democrats are hearing concerns about inflation and gas prices. In response, candidates are talking about ongoing efforts to curb costs, while highlighting low unemployment and other economic gains during President Joe Biden's first year and a half in office. Republicans are hearing from voters who are angry that Donald Trump lost the 2020 election, and are repeating ridiculous conspiracy theories about Biden "stealing" it. Republicans, hearing the underlying racism and antipathy to democracy fueling those conspiracy theories, are responding by promising their supporters they will never allow another free and fair election again.

To normal people, whose sense of morality and basic decency hasn't been crushed by the relentless both sides-ism of the Beltway press, these two pathways are totally different, especially in moral terms. The first is an example of how a normal party in a democratic system behaves. The second is a bunch of authoritarians using lies to hype each other up for a fascist takeover of government.

But according to Reid J. Epstein and Jonathan Weisman reporting for the New York Times, these two approaches are samesies. In an article headlined "Democrats Fear for Democracy. Why Aren't They Running on It in 2022?" the Times reports approach the issue with a "gosh darn, isn't it ironic?" thesis that somehow it's Republican voters who are more "concerned" about democracy than Democratic ones. You know, because of that unpleasant business where Trump lied about voter fraud for months and then incited a failed insurrection.

Admitting that a plurality of Americans are straight up fascist is the third rail in mainstream political media.

In a pathetic bid to make the story seem fair-and-balanced — rather than plain old truthful — Epstein and Weisman lean heavily on euphemisms to describe Republican enthusiasm for repeating the Big Lie. In the subhead, Republican voters are described as "energized about the issues of elections and voting." To describe the three-quarters support among GOP voters for anti-democratic conspiracy theories, the writers go with "impassioned about electoral issues."

While the reporters are careful to repeatedly note that there is no basis for claims that Biden stole the election, this kind of framing of the Big Lie as a sincere-if-misguided concern is still a massive problem. It makes it sound as if Republican voters have legitimate concerns about the future of democracy. In reality, however, Republican voters are increasingly hostile to democracy.

Trump voters use the Big Lie in the same way Trump uses it: To put a moral gloss on what is a deeply immoral desire. We know this, because a new poll by Hart Research, commissioned by the New Republic, shows that the majority of Republicans support Trump inciting a violent insurrection to overthrow an election and install himself illegally in power. A full 57% of Republicans describe the January 6 attack as "an act of patriotism." Those folks saw the same thing everyone else did: A group of people, refusing to accept a lost election, using violence to derail the certification of the legitimate winner. The majority of Republicans simply would rather end democracy than accept losing power.

But admitting that a plurality of Americans are straight up fascist is the third rail in mainstream political media. It's far easier to tell a story about how these are just good-hearted Americans who are deluded by Trump's lies into believing that democracy is under threat.

RELATED: Has the mainstream media already made its peace with fascism? We'll soon find out

A recent Atlantic piece by never-Trump Republican operative Sarah Longwell showcases how much pretzel logic is employed to maintain the delusional-not-fascist narrative. Longwell has been conducting focus groups of Trump supporters and their support for the Big Lie. As she writes, "the belief that the election was stolen is not a fully formed thought," and really "more of an attitude, or a tribal pose." When asked about why they believe the election was stolen, they tend to say things like, "it just didn't seem right."

We cannot deal with the problem of rising fascism without naming it or understanding what it is.

The most straightforward explanation for these results is that none of these people really believe the election was stolen. They're just mad that Black people got to vote in it and those votes tipped the scale towards a Biden win. But saying so outright makes them sound racist, so instead they allude to how it's just "not right" the way things went down. (This problem in polling's ability to suss out people's true feelings is known as the "social desirability bias.") But even as she grasps that the Big Lie is more "a tribal pose" than a sincere belief, Longwell continues to insist that these "voters aren't bad," but merely deluded. But even her own research shows that the Big Lie is less a fully constructed belief and more of a glib thing that fascists say to avoid admitting they are fascists.

RELATED: Enough with "both sides"! Faux-neutral journalism is no way to fight the truth-deniers

About 35% of Americans, and a strong majority of Republicans, espouse the Big Lie. That's a lot of people who are either partially or fully on board with a fascist agenda, so it's unsurprising that journalists grasp for alternative explanations to explain poll results. But really, this level of fascist sentiment isn't exactly unprecedented in American society. As a history piece at PBS notes, estimates for membership in the Ku Klux Klan in the 1920s ranged from "three million to as high as eight million Klansmen." A little over 25 million people voted in the 1920 election, which puts official KKK membership at 12-32% of the voting population at the time. There's long been a plurality of Americans who are fascist or fascist-adjacent, especially when there's someone like Trump churning out conspiracy theories they can use to justify their otherwise indefensible beliefs.

As Perry Bacon wrote in the Washington Post on Wednesday, outlets like the New York Times and CNN "are signaling that they will continue and even increase some of the both sides-ism, false equivalence and centrist bias that has long impaired coverage of U.S. politics and therefore our democracy itself." It's tempting for journalists to believe the fascism problem has receded now that Trump is no longer in office, allowing them to slide right back to the comfy territory of treating the two parties as morally equivalent. But doing so comes at the expense of the truth.

We cannot deal with the problem of rising fascism without naming it or understanding what it is. A story about well-meaning but deluded Republicans who think they're "saving" democracy may be soothing, but it's also untrue. We're very much facing down what Hannah Arendt described as the "banality of evil," where outright fascism is getting normalized and legitimized. By writing and talking about this problem as if it were normal partisan politics, journalists are contributing to banality of the evil. But that is a choice. Another choice is available: To name things for what they are and be honest with your audience about what's happening.

Telling the truth may be the harder path, but it's literally what journalists are supposed to be doing.