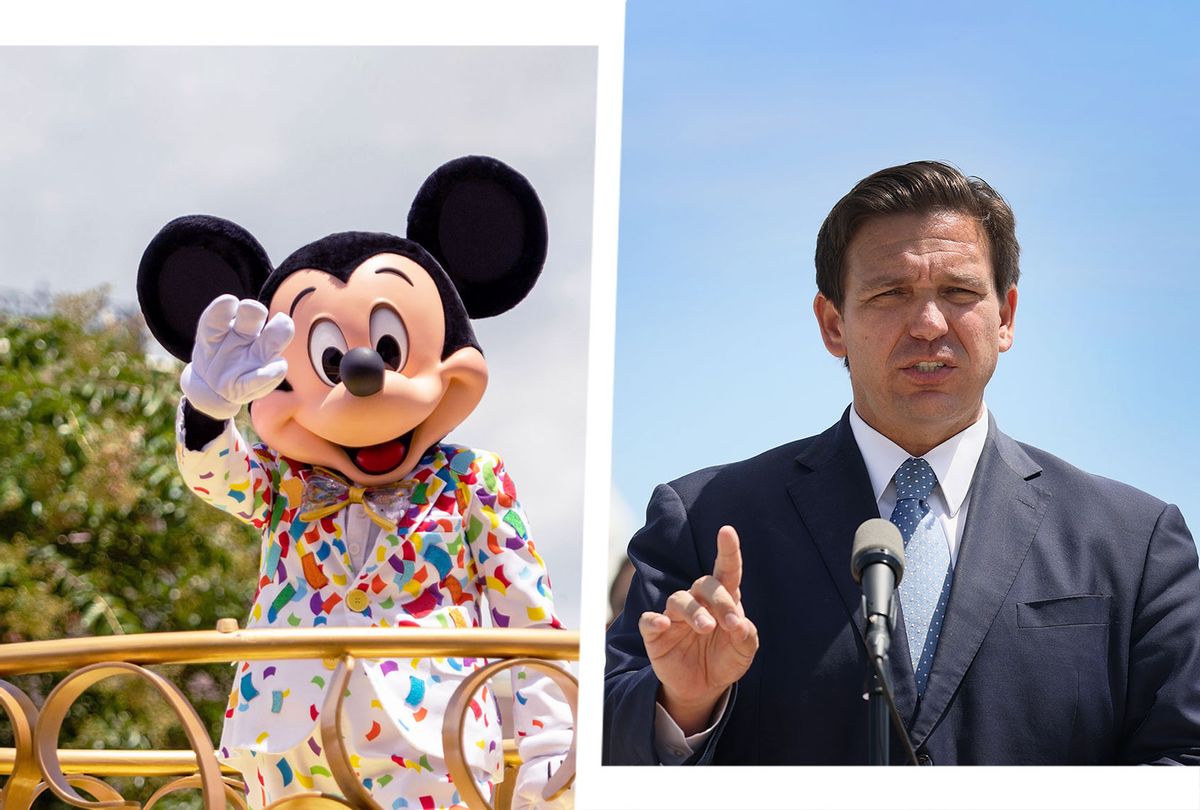 In 1967, Disney struck an unprecedented deal with the state of Florida. Having just bought a 25,000-acre property for Disney World, a first-of-its-kind resort complex set to bring the state untold tourism and revenue, Disney was granted the right to operate autonomously within its very own district, allowing the company to pay itself taxes and provide its own municipal services. For decades, this compromise proved a boon to both Disney and the Sunshine State. But now, with the company fighting to repeal one of Florida's chief legislative showpieces, state Republicans are attempting to completely strip Disney of its special status, prompting intense concerns about the move's potentially devastating impact on millions of Floridians.

Disney's clash with the Florida GOP was triggered last month when Gov. Ron DeSantis signed what's been colloquially dubbed by critics as the "Don't Say Gay" bill (H.B. 1775), a Republican-backed measure that outlaws the discussion of LGBTQ+ subjects in public school classrooms. Days after the bill was rubber-stamped, Disney, facing a clarion call to take a stand against the measure, announced that it would work with lawmakers to repeal it.

Unsurprisingly, that commitment did not sit well with Florida Republicans, who have since then lobbed a medley of outlandish and unfounded accusations against the company. Most notably, Republicans have claimed that Disney supports (or at least enables) child "grooming," an accusation that Republicans have also disproportionately hurled at LGBTQ+ teachers, drawing a dangerous association between queerness and pedophilia.

This week, Florida Republicans sought to take their anti-woke crusade a step further, with DeSantis announcing a special session on the Reedy Creek Improvement District, Disney's independent governing jurisdiction and taxing district, which he formally abolished on Friday.

"Orange County would really have no other no other option except to raise property taxes on every citizen in Orange County."

"Disney is a guest in Florida," Republican state Rep. Randy Fine, who sponsored the measure legislation, told Insider. "They're a California company that clearly has California values. And they come to this state as our guest and they ask for special privileges that no other company in the state of Florida has, including their competitors."

State Sen. Jennifer Bradley, another Republican sponsor, has spoken along similar lines, also suggesting that the bill is mostly an attempt to level the playing field.

"They are not governed by a different set of rules as everyone else. They make their own rules," she told The Washington Post. "Those are incredibly broad powers that have been brought to light."

Conservative think tank Heritage Action for America has waxed even more philosophical, claiming that "Disney has waged war on the rights of parents and innocence of children."

"While Disney bullies state legislators and uses their platform to force-feed their woke agenda to young children, they shouldn't receive any special privileges or legislative exemptions to do so," said Jessica Anderson, Heritage's executive director. "Thanks to the Florida Legislature, bills to revoke these special privileges and hold Disney accountable are now heading to Governor DeSantis's desk."

The bill, passed by Republicans in a special session this week, would fundamentally restructure the way Disney operates in the Sunshine State. Since the '60s, Reedy Creek has had broad authority to handle its own municipal services, including tax collection, sewage, land development, bond issuance, transportation infrastructure, and emergency services. If revoked, however, Reedy Creek would have to offload all of these services to Orange and Osceola counties – a move that's liable to raise taxes on residents, as a CBS affiliate reported this week.

To make matters worse, the bill would have Orange and Osceola absorb all of Reedy Creek's assets and liabilities, meaning that both counties would inherit the potential $2 billion worth of debt currently on Disney's books.

"Because Reedy Creek is an independent taxing district, the minute that it ceases to exist is the minute that they no longer collect taxes," Orange County Tax Collector Scott Randolph said in an interview with Salon. "And then what happens under Florida law is all of Reedy Creek's debts and obligations transfer over to Orange County."

At present, Scott explained, Reedy Creek collects $105 million in general revenue annually. It also takes in $58 million to service its own debts, meaning that it collects $163 million total per year. But according to Scott, there's "no way" that Orange County can collect that same amount in order to pay for the new municipal services it would have to provide.

"Orange County would really have no other no other option except to raise property taxes on every citizen in Orange County," he said, noting that residents might see hikes of 20% to 25%.

To be fair, Orange and Osceola would be able to collect tax revenue from Reedy Creek's properties if the district is voided. But even then, Florida's ability to tax Disney, ironically enough, is exceptionally limited, according to investigative journalist Jason Garcia. That's because state Republicans in 2007 effectively mandated that the taxable value of Disney's properties could not rise by any more than 10% annually – a cap that was supposed to expire in 2018 but was instead made permanent.

And to add insult to injury, hundreds of people who are employed by Reedy Creek will be "caught in the middle of this crossfire," Democratic state Rep. Anna Eskamani told Salon. In other words, if Reedy Creek is dissolved, all of its some 400 workers may be at risk of unemployment. "There [is] no guarantee that folks would keep their jobs, keep their wages, keep it at retirement Keep their seniority – nothing like that [is] guaranteed."

"We've created a government of a business. I don't know if this exists anywhere else."

David Ramba, Executive Director of the Florida Association of Special Districts, said this week that the move would be completely unheard of, suggesting that Republicans might be rushing the bill for political reasons without considering its real-world repercussions.

"What we haven't seen is the dissolution of a district that is active, is of this size, and does not want to be dissolved," he told an ABC affiliate. "This is too big of an issue to just say, 'Hey, we're gonna get rid of you.'"

Reedy Creek's dissolution by the state legislature might also contravene statutory law, which mandates that such a move "must be approved by a majority of the resident electors of the district." Orange County Commissioner Christine Moore told Mediaite that she was "pretty confident" that this statute would sufficiently protect Reedy Creek in court.

But Republicans have mostly bristled at these concerns, arguing that the elimination of the special district is long past due. Chief among Disney's most vocal opponents is Fine, who in an interview with Salon made an argument that would appear to align with the Democratic agenda of limiting corporate power.

"[Disney] can do whatever they want," Fine said in an interview with Salon, noting that Reedy Creek can exercise eminent domain, build infrastructure projects outside of its boundaries, adopt its own building safety codes, and even construct nuclear reactors. "It gets crazy when you think about it … I mean, we've created a government of a business. I don't know if this exists anywhere else."

At the same time, Republicans have had decades to object to Reedy Creek's jurisdiction, making their effort to ban the district somewhat suspect in light of the party's political showdown with Disney.

Asked about this decades-long delay, Fine argued that "Disney has exercised an awful lot of political power in both to both create and protect" Reedy Creek.

"The other thing is, when you kick the hornets' nest, sometimes issues arise that you then go and deal with," Fine added, suggesting that Disney went outside its purview by rebuking H.B. 1775. "So many of the great memories of our lives have happened at this company, and to watch them light themselves on fire on the altar of sexualizing children is heartbreaking to me."

"No matter what your perspective is on Disney, you have to agree that trying to cancel a company because they use their free speech … is undemocratic and unfair."

On Thursday, during the House's special session on Reedy Creek, Eskamani submitted an amendment to revoke the district's ability to change its own boundaries, build a power plant, and exercise eminent domain – without rescinding its special district status.

"We literally verbatim took what the governor and Randy Fine have said [about Reedy Creek] and we filed an amendment for a scalpel approach to remove those powers," Eskamani said in an interview. "All the Republicans voted no on it."

If S.B. 4-C is signed into law, Reedy Creek would be officially dismantled on June 1 of next year, setting an immensely "scary tone" for any business that dares to speak out against the Florida legislature, said Eskamani.

"My responsibility is to help Floridians understand how concerning this is," she told Salon. "No matter what your perspective is on Disney, you have to agree that trying to cancel a company because they use their free speech … is undemocratic and unfair."