By Eric Schank - Keith A. Spencer 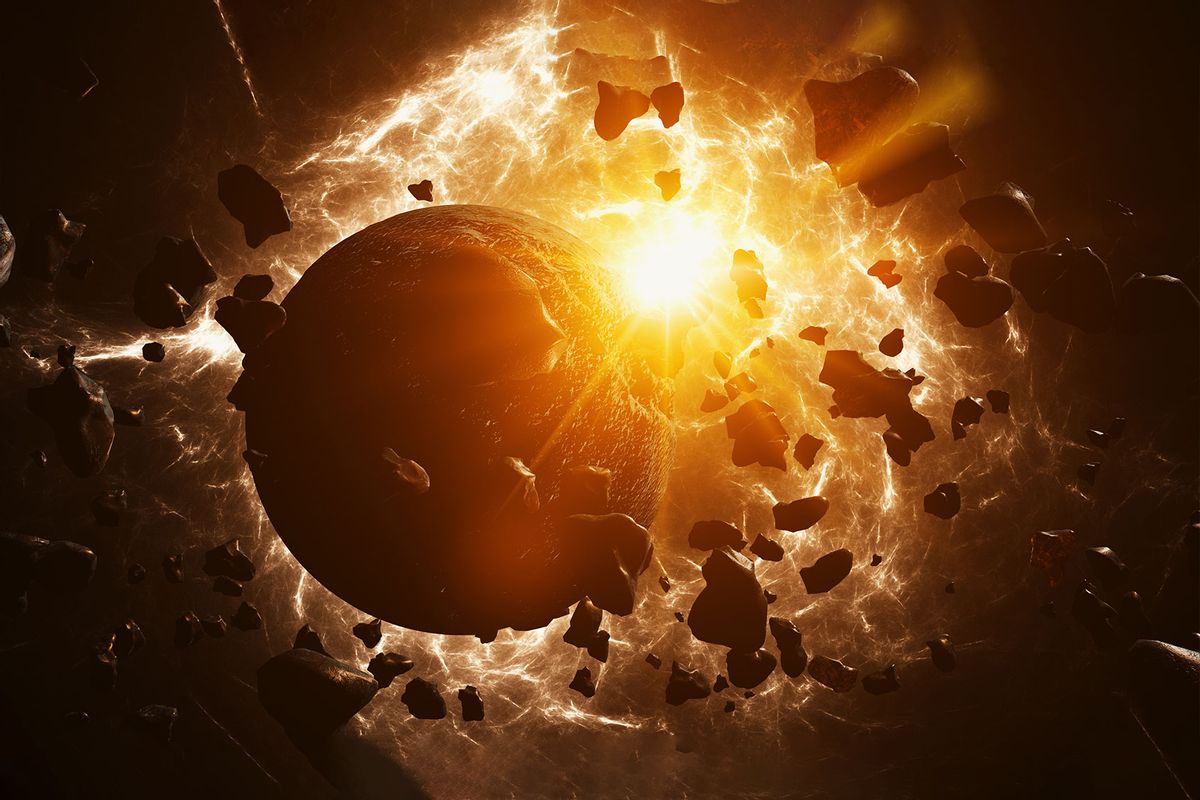 A plethora of downright bizarre scientific research from the Department of Defense previously kept under wraps has been uncovered, revealing an array of peculiar schemes proposed by the United States military. One outlandish proposal suggested detonating nuclear bombs on the moon to create a tunnel through it. Millions in taxpayer dollars were spent on the research, which appears to have relied on a contractor, Bigelow Aerospace Advanced Studies, which was owned by multi-millionaire Robert Bigelow, a hotel impresario. The public was kept in the dark until now regarding what research was being funded.

The documents pertaining to the research were obtained by a Vice reporter through a Freedom of Information Act (FOIA) request filed four years ago. A writer with The Black Vault, a blog devoted to de-classified government documents, received many of the same papers the same week based on a separate FOIA request filed years ago.

The moon-nuking proposal and other bizarre research documents originated in the unclassified yet highly secretive Advanced Aerospace Threat Identification Program (AATIP) founded in 2007, a division within the Department of Defense. When the New York Times uncovered the program in 2017, AATIP became synonymous with UFOs, which were the alleged subject of their investigations, following the video leak of unidentified aircraft sightings from former director Luis Elizondo after his resignation from the DoD. By then, the program had already ceased to exist, but the question remains: Why would an organization supposedly concerned with UFOs and future aerospace technologies contemplate detonating nuclear weapons at the moon?

The confusing answer has to do with specious science centered around anti-gravity, and suggests that the government was hoodwinked by a contractor who wanted to justify their ongoing government contract by producing facile "research" documents that, on the surface, appear to propose feasible futuristic technological possibilities — yet which actually lack a rigorous understanding of fundamental physics.

Almost 1,600 pages of reports, proposals, contracts, and meeting notes detail the feasibility of a wide range of technologies seemingly garnered from science fiction. Many have author names redacted, but former Senator Harry Reid, who was not only privy to the goings-on of AATIP but founded it, had no such redactions. The late senator from Nevada, home of military installation Area 51, was famously interested in extraterrestrials.

"Ultimately, the results of AATIP will not only benefit the U.S. Government, but I believe will directly benefit DoD in ways not yet imagined," he wrote in a memo to the Secretary of Defense. "The technological insight and capability gained will provide the U.S. with a distinct advantage over any foreign threats and allow the U.S. to maintain its preeminence as a world leader."

The lunar tunnel concept, which was to be carved out using nuclear bombs, connected to the program's desire to achieve "antigravity." (There is no accepted scientific reason that a tunnel to the moon's core would provide access to antigravity or any kind of theoretical antigravity particle.) The document proposing the moon tunnel, titled "Negative Mass Propulsion," was dated to January 2011.

"It is easy to prove that there are negative masses all around us, albeit hidden behind positive masses," it read. "Their use for propulsion by reducing the inertia of matter, for example in the limit of macroscopic bodies with zero rest mass, depends on a technical solution to free them from their imprisonment by positive masses."

The document proposes that "large amounts of negative mass," a theoretical entity for which there is no evidence, may become "trapped" and accumulate in "gravitational potential wells" like the center of the moon. The document continues:

Now it just happens that the center of the moon is a potential well, not too deep that it cannot be reached by making a tunnel through the moon, not possible for the deeper potential well of the earth, where the temperature and pressure are too high. Making a tunnel through the moon, provided there is a good supply of negative mass, could revolutionize interstellar space flight. A sequence of thermonuclear shape charges would be required to make such a tunnel technically feasible.

Gravity, one of the four fundamental forces in the universe, is a one-way attractor — unlike its counterparts in magnetism, which can also repel. The idea that there might exist antigravity, a negative force counteracting gravity, has been a staple of science fiction for generations.  Yet the Standard Model of Particle Physics, a "gold standard" theory which predicted the properties of many fundamental particles long before they were sighted, has no prediction of antigravity.

The existence of antigravity would require negative mass, which has never been sighted in the universe, nor in any particle accelerator (which routinely produce exotic particles). The moon-tunnel proposal is premised upon using such an engineering project to access a hypothetical reserve of such negative mass.

"Making a tunnel through the moon, provided there is a good supply of negative mass, could revolutionize interstellar space flight," one document stated. "A sequence of thermonuclear shape charges would be required to make such a tunnel technically feasible."

"The contractor shall complete advanced aerospace weapon system technical studies in the following areas," the document continued, listing "lift," "propulsion," "control," "power generation," and "materials" as some of the categories of areas to be studied.

"It is expected that numerous experts with extensive experience (minimum of 10 years) in breakthrough aerospace research and development will be required to meet the demands of the above program," the Defense Department wrote in their proposal for bids.

As Vice notes, BAASS was the only bidder for the contract for funding from the Advanced Aerospace Threat Identification Program and its sister division, and received the contract.

These documents became available under the Freedom of Information Act after a 2018 Coast to Coast interview with a consultant for the Defense Department, Dr. Eric Davis, spurred multiple requests. In the interview, Davis claimed that natural phenomena, advanced foreign technology, or misidentifications do not explain all UFOs and "all arrows pointed toward non-human origin" for those. He also indicated the existence of the documents in question.

In 2020, a bombshell Popular Mechanics investigation bolstered public fascination with confirmation of the program's purpose, investigating "unidentified aerial phenomena." Since the dissolution of the short-lived program in 2012, documents concerning the exact scope of investigations had remained out of reach.

While the ongoing release of documents related to the Advanced Aerospace Threat Identification Program may produce more eyebrow-raising headlines, the research and its origins suggest very little supernatural or futuristic.

At the time, Reid indicated that information made available to the public at the time had "only scratched the surface" of Pentagon intelligence on UFOs and advanced technology and told Motherboard that he believed that far more information should be released publicly. He also advocated for higher levels of security classification for the program. There simply is no evidence these indicate extraterrestrial life. All the secrecy has little to do with UFOs and everything to do with advanced technology development.

"Given the current rate of success, the continued study of these subjects will likely lead to technology advancements that in the immediate near-term will require extraordinary protection," Reid wrote in the memo.

While the ongoing release of documents related to the Advanced Aerospace Threat Identification Program may produce more eyebrow-raising headlines, the research and its origins suggest very little supernatural or futuristic. Rather, it suggests a contractor with a staff that had a poor understanding of physics produced fantastical-sounding technological proposals to wow generals who were similarly ill-versed in particle physics, in order to warrant continued largesse with government contracts.

Robert Bigelow, namesake of the now-defunct Bigelow Aerospace Advanced Studies that was awarded the research contract for the AATIP program, is well-known for his interest in the paranormal. Bigelow owns Skinwalker Ranch, a property in Utah reputed to be a haven for supernatural activity and unidentified flying object sightings. Bigelow recently found the Bigelow Institute for Consciousness Studies, in order to "support research into what happens after death," according to a recent New York Times profile of him.

Put together, all these facts suggest that this moon-nuking antigravity research is less exciting than it might seem at first glance. Perhaps a hotel millionaire obsessed with the paranormal convinced the government to fund his own company's research into specious sci-fi technologies, producing proposals that cost millions and sounded impressive yet which made little physical sense.

But until more of the huge trove of documents are analyzed, and the authors of this research are confirmed, the truth is still out there.

Read more on government research into the paranormal: