A huge solar flare just struck Earth — and there may be bigger ones to come, experts say 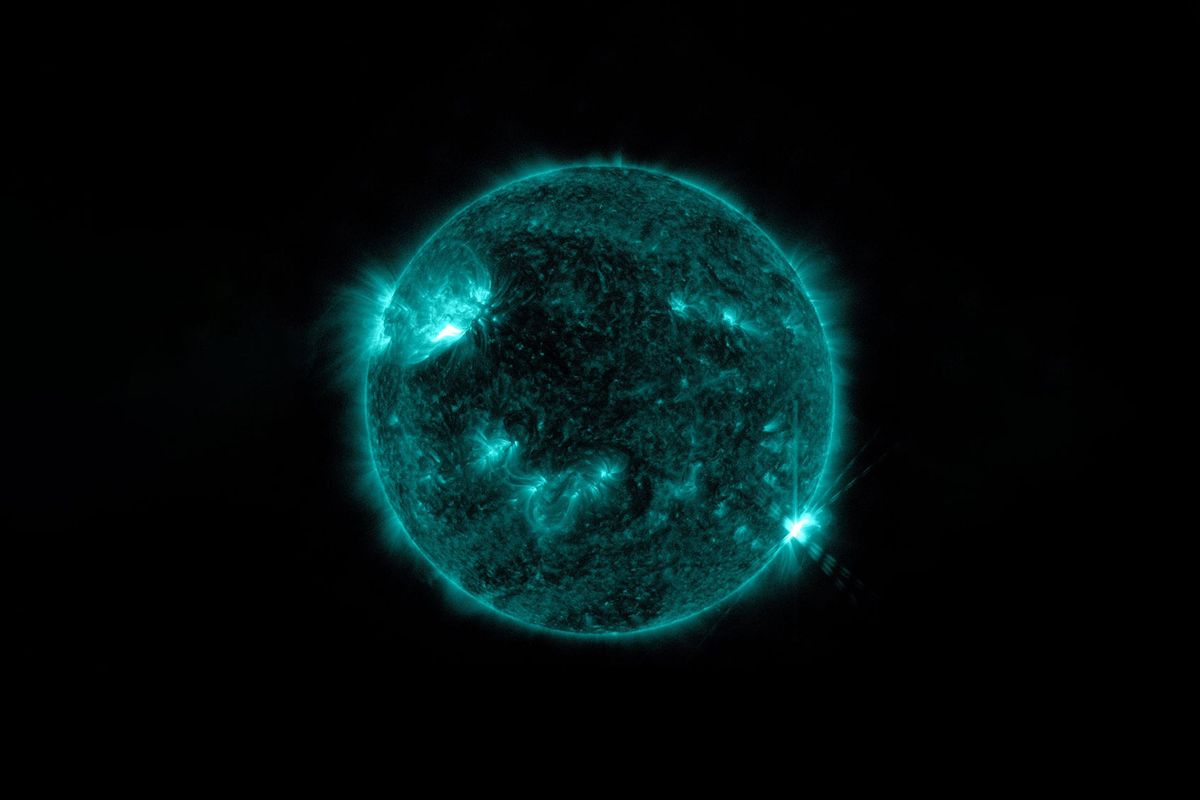 NASA’s Solar Dynamics Observatory captured this image of a solar flare – as seen in the bright flash in the lower right portion of the image– at 11:57 p.m. EST on April 19, 2022. The image shows a subset of extreme ultraviolet light that highlights the extremely hot material in flares and is colorized in SDO channel color blue. (NASA/SDO)
--

The weather on the sun is frightful.

Though they may seem unusual, the strong solar flares are a side effect of a natural, seasonal cycle that occurs on the sun. Earth's sun has recurrent "seasons," much like Earth — a phenomenon known as the solar cycle, which lasts for about 11 Earth years. Currently, the Sun is going through its 25th solar cycle since counting began in 1755. Scientists track this cycle by counting the Sun's number of sunspots; when the sun has the fewest sunspots, it is in its solar minimum phase of the solar cycle. When the number of sunspots reach their pinnacle, the sun is undergoing its solar maximum phase of its solar cycle. During the solar maximum phase of the sun, solar activity increases — hence, the gusty space storm occurring at the moment.

"A solar flare is an intense eruption of radiation and charged particles in the hot corona above the surface of the sun," Avi Loeb, former chair of the astronomy department at Harvard University, explained via email. "Flares occur in active regions and are often, but not always, accompanied by coronal mass ejections."

Some of the most recent flares were classified as X-class flares, the most energetic category. While these flares are to be expected during this solar season, they can cause issues with Earth technology. Specifically, flares can affect radio communications, electric power grids, navigation signals, and space satellites.

"The cloud of energetic particles could hit the Earth if we are unlucky, and disrupt communications and power grids," Loeb said.

As solar activity ramps up in the sun's 25th cycle, scientists worry that this week's solar weather is merely prophesying a more disruptive solar flare, such as the one that hit Earth in 1859. The Carrington Event, as it is now known, wreaked havoc on telegraph lines. Widespread fires occurred in telegraph stations, and the flare caused an aurora that was visible over most of North America and even as south as the Caribbean.

Loeb said our increasing reliance on technology could mean that if another massive flare akin to the Carrington flare were to strike Earth, it would "wreak significant damage to electrical power grids, global supply chains and satellite communications."

"Over the past few decades, it has become increasingly apparent that greater reliance on technology has also made us more vulnerable to risks posed by extreme space weather events," Loeb said. "For instance, coronal mass ejections can produce powerful geomagnetic storms that disrupt a wide range of electrical systems."

Loeb said the damage could tally up to $10 trillion dollars in economic losses, and a full recovery would take several years. Luckily, a study published in 2019 found the chance of a Carrington Event-scale flare occurring before 2029 to be less than 1.9 percent.

Still, astronomers like Loeb think that the most recent massive flares should serve as a warning that the world must be prepared for another event akin to the Carrington Event.

"In light of mounting evidence indicating that the economic damage due to large flares would be very extensive, I hope that the recent flare would serve as a wake-up call and will stimulate further research to identify methods for protecting our planet that are both physically sound and technologically implementable within the next century," Loeb said.