A supernova in miniature: Bizarre "micronovas" are exploding in small stars, astronomers say

The micronova "challenges our understanding of how thermonuclear explosions in stars occur," one scientist said 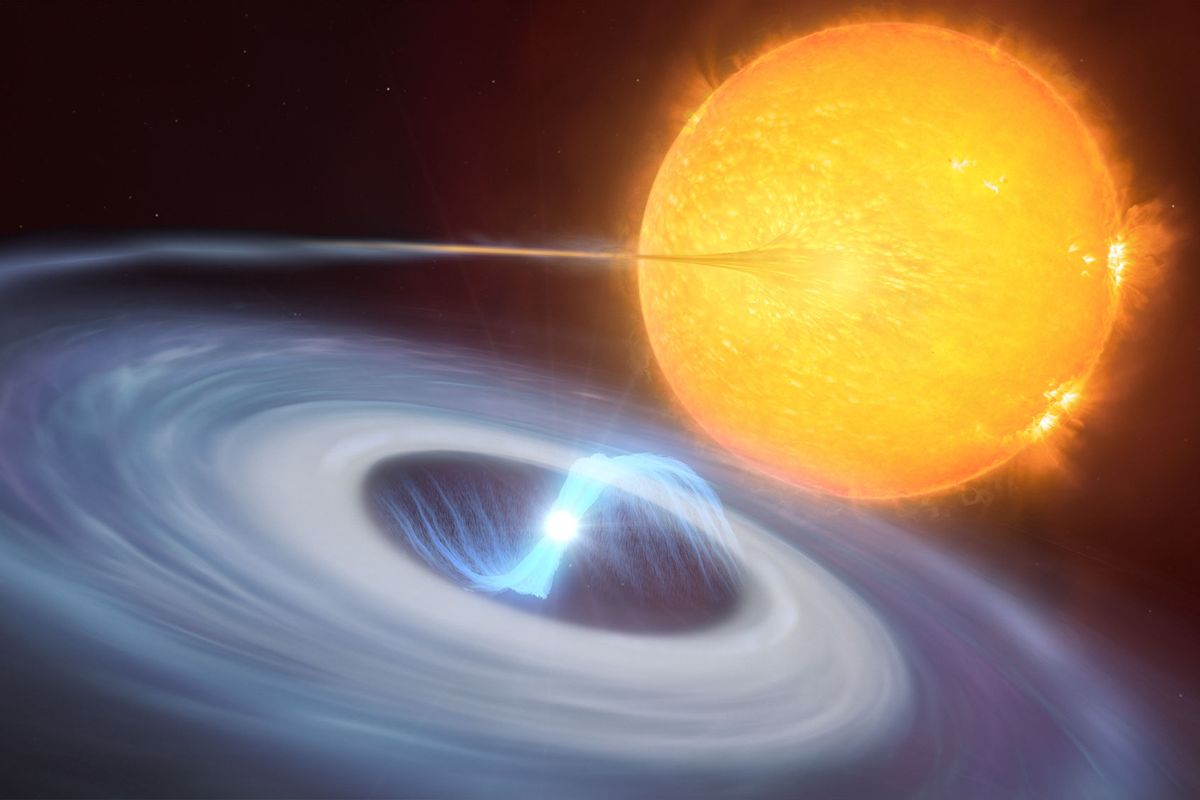 This artist’s impression shows a two-star system where micronovae may occur. The blue disc swirling around the bright white dwarf in the centre of the image is made up of material, mostly hydrogen, stolen from its companion star. As the material falls on the hot surface of the star, it triggers a micronova explosion, contained by the magnetic fields at one of the white dwarf’s poles. (ESO/M. Kornmesser, L. Calçada)
--

For centuries, human beings have been fascinated by supernovas, the violent explosion of a massive star at the end of its life. A supernova in our galaxy lit up the sky for 8 months in 185 A.D., marking humanity's first recorded observation. Since then, songs, ballads, novels and movies have been written about supernovas, emphasizing both their power and mystery.

Twentieth-century astronomers were finally able to understand the phenomenon, cataloguing them into three types. The first type of supernova occurs when a heavy star's core has become saturated with iron created through the nuclear fusion of lighter elements. Once iron fusion begins, the star's core quickly grows dense beyond the point at which atoms can stably exist. At that point, the pressure pushes atoms' electron shells too close to their nuclei, causing them to spontaneously merge. This causes an uncontrolled reaction that compresses the core of the star into either a neutron star or a black hole, while the outer shell blows off at incredible speed. This type of supernova is known as iron-core collapse.

The second type of supernova happens in binary star systems, in which a "dead" white dwarf star — which has ceased fusion, and is slowly cooling — steals gas from its active companion star as they orbit close. After accreting its neighbors' matter for years, the dead white dwarf star may spontaneously start fusion up again, which often triggers a supernova. And then there's the rarely-seen third type, the so-called electron collapse supernova, which was widely theorized for a long time, but observations were only confirmed in 2021.

Now, astronomers believe they've discovered a new type of stellar explosion, similar to a supernova, that occurs when a star dies. It's called a "micronova," a reference to that it occurs in much smaller stars. The details of this new discovery were published in a study in Nature last week.

"We have discovered and identified for the first time what we are calling a micronova," said Simone Scaringi, an astronomer at Durham University in the United Kingdom, who led the study, in a press statement. "The phenomenon challenges our understanding of how thermonuclear explosions in stars occur. We thought we knew this, but this discovery proposes a totally new way to achieve them."

As its name implies, a micronova is believed to occur on the surface of small, dense stars known as white dwarf stars. While the explosion is far less energetic than a supernovas, micronovas still produce a lot of energy. Scientists believe one of these outbursts can burn through about 20,000,000 trillion kg— or "about 3.5 billion Great Pyramids of Giza," as the researchers of the study noted.

Another key similarity between a supernova and micronova is how long they last. In a supernova, the explosion takes seconds or minutes, but it will leave remnants in the sky for days, weeks, or years. However, in a micronova, the aftermath is short-lived and easy to miss, despite its power.

Researchers first observed a white dwarf star emitting a micronova in data from the TESS exoplanet-hunting telescope, which was designed to identify very small dimming variations in stars. In sifting through this data, the researchers discovered a brief flash of light from a white dwarf star.

"For the first time, we have now seen that hydrogen fusion can also happen in a localized way," said astronomer Paul Groot of Radboud University in the Netherlands. "The hydrogen fuel can be contained at the base of the magnetic poles of some white dwarfs, so that fusion only happens at these magnetic poles."

Groot compared micronovas to "micro-fusion bombs going off, which have about one millionth of the strength of a nova explosion, hence the name micronova."

While researchers believe the bursts might be pretty common, astronomers are going to have to make more observations to better understand this phenomenon.

"It just goes to show how dynamic the universe is," Scaringi said. "These events may actually be quite common, but because they are so fast they are difficult to catch in action."