The photograph that showed us the horrors of illegal abortion

In one shocking image, the abortion rights movement found its symbol 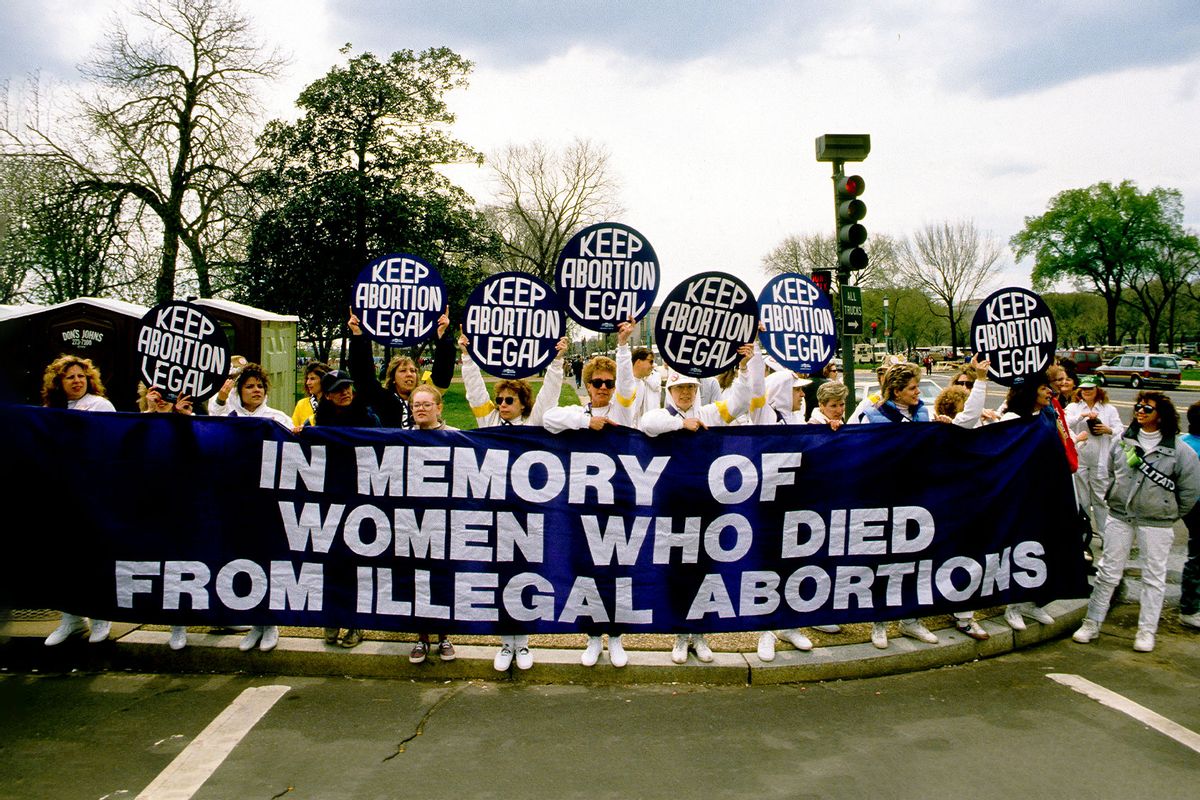 View of demonstrators as they stand behind a banner that reads 'In memory of Women Who Died from Illegal Abortions' during the March for Women's Lives demonstration, Washington DC, April 9, 1989. (Mark Reinstein/Corbis via Getty Images)
--

When you spend a lifetime invested in reproductive rights, you see a lot of photographs of fetuses. Perhaps you, too, were at some point forced to watch the notorious anti-abortion propaganda film "The Silent Scream"; or had a picture of fetal remains shoved into your face while you were walking in to your local Planned Parenthood. Maybe you've had the trolls on your social media blast you with bloodied images in response to you stating a feminist opinion. In my time, I have seen hundreds and hundreds of just such pictures. Yet I can remember only one that vividly showed me the horrible price of restricting abortion access, only one exemplary piece of evidence of the vicious hypocrisy of the phrase "pro-life."

It's a police photograph of a woman face down on the floor next to the unmade bed, her knees curled up to her armpits. There is a towel crumpled up under the part of her body she's been bleeding extensively from. It is June 8, 1964, and she is naked and dead in a Connecticut motel room from an illegal abortion.

Even in black and white, the image is vivid and shocking. It communicates the suffering the woman endured, the desperation that drove her to an action so extreme. And it conveys the profound apathy of a society that would leave a woman to die alone in such circumstances, to be discovered later by a surprised motel maid.

The photograph is brutal in its bleak anonymity. Yes, it's clearly a young white woman with curling dark hair. But it could be any woman. It could be your wife, your best friend, your sister, your daughter, your mom.

Nine years after the woman's death, the Supreme Court issued its ruling on Roe v. Wade in January of 1973. In April of that year, the fledgling Ms. magazine ran the photograph of the unnamed woman in a story about the "visible evidence of butchery" it represents. The headline accompanying it read, "Never again." The photograph, along with that steely vow of "Never again," quickly became a lightning rod for the abortion rights movement. It became a placard in protests, a rallying cry against complacency.

In the nearly fifty years that women in this country have held on to a modicum of reproductive freedom, that photograph has lost none of its power, but it has diminished a great deal in its ubiquity. If you don't know about that chilling photo and have never seen it, it might be harder to conceptualize the harrowing consequences of restricting our rights to safe, legal abortions. It might be easier to slide further and further from the promise of "Never again." Until we find ourselves here, today.

The photograph is brutal in its bleak anonymity. Yes, it's clearly a young white woman with curling dark hair. But it could be any woman. It could be your wife, your best friend, your sister, your daughter, your mom. It could be you. To look at that lifeless body in that grim motel room is to bear witness to an atrocity that could befall almost any one of us, or any one we care about. That's what makes it such an effective symbol.

But the photograph is also devastating in its specificity. That blood smeared corpse is not some nameless composite, not an emotion stirring anecdote in a debate. It's the body of a real woman, whose untimely death was hurried along by cruelty and cowardice of a system that catered to the men who betrayed her.

It was her sister Leona Gordon, who had a subscription to Ms., who recognized her.

Santoro's sister and her surviving daughters — who were initially told their mother had died in a car accident — have spent decades grappling with the effects of the world sharing in Gerri's devastating last image.

Gerri Santoro was 28 years old. She was a mother of two daughters. She was a survivor fleeing a husband that physically abused her and her children. In 1964, she was six months pregnant by a married coworker, and had learned her estranged spouse was coming to town to visit. Afraid of what he would do when he saw her, Gerri saw the limited options before her. So she and checked in to a motel room with her lover under an assumed name, armed with a catheter and a textbook. The man fled when she started hemorrhaging. All she left behind, as one person hauntingly puts it in Jane Gillooly's 1995 documentary "Leona's Sister Gerri," was "two kids and a purse."

Santoro's sister and her surviving daughters — who were initially told their mother had died in a car accident — have spent decades grappling with the effects of the world sharing in Gerri's devastating last image. But in 2004, her daughter Joannie Santoro-Griffin, along with her own daughter and her aunt Leona, attended their first March for Women's Lives. "I can't change what happened to my mother," she told the Washington Post at the time. "But I can help change what's happening to our laws and make sure this doesn't happen to anyone else."

Back in 1964, just weeks before Gerri's death, Leona was trapped in a bad marriage and her sixth pregnancy. She was fortunate to have survived her own illegal abortion. That's the risk that women take when they are cornered like that. In a 2006 blog post on the anniversary of her death, Santoro-Griffin recalled simply that her mother had "put her life on the line for my sister and me, and for herself – and she lost."

The World Health Organization notes that "Inaccessibility of quality abortion care risks violating a range of human rights of women and girls, including the right to life" and estimates that "each year, 4.7 – 13.2% of maternal deaths can be attributed to unsafe abortion." As they note: "In developing countries alone, 7 million women per year were treated in hospital facilities for complications of unsafe abortion."

Gerri Santoro's life mattered. Her death matters, today as much as ever. "Never again" was never a promise; it was just a dream. So look at that image of her body, if you can bear it, (The graphic image is included in Santoro's Wikipedia entry) and remember that this is the price that our current conservative justices and their sadistic flunkies feel okay with women paying. Remember that they know full well that lip service to "safe havens" is meaningless to the domestic violence victim, to the teenage incest survivor, to any woman, who for any reason, needs to terminate her pregnancy in safety. And know that these ghouls have told us clearly their answer to the question that one man asks in "Leona's Sister Gerri." "Is it the one-inch tissue we are concerned about? Or is it the dead woman, on the motel floor?"