California is likely to become a destination for those seeking abortions

But is the state prepared for a surge out-of-state patients? 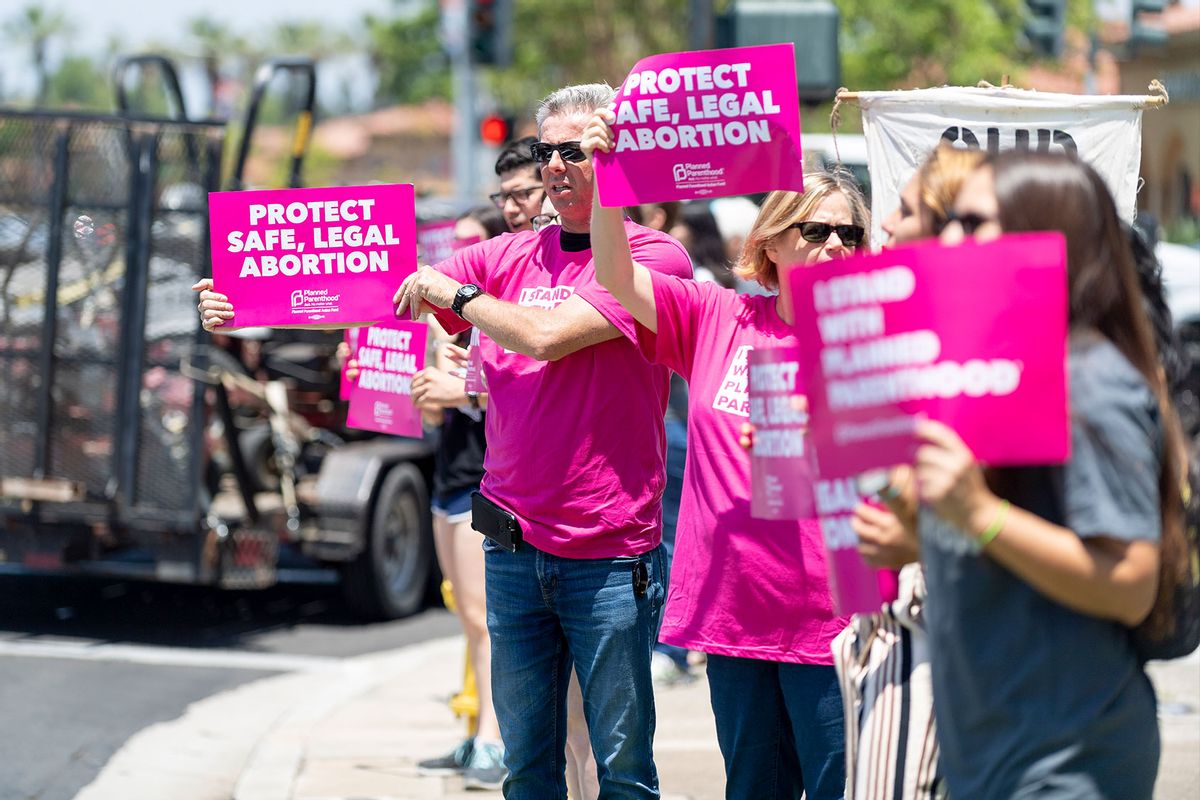 Protestors hold signs during Stop the Bans Speak Out Tour at the corner of Culver Drive and Alton Parkway in Irvine, CA on Wednesday, June 19, 2019. (Paul Bersebach/MediaNews Group/Orange County Register via Getty Images)
--

People travel to California for lots of reasons: to visit Hollywood and Fisherman's Wharf, to hike Yosemite and Muir Woods. In the event Roe v. Wade is overturned, it is likely to become a top destination for abortions, too.

Indeed, if Justice Samuel Alito's leaked majority opinion becomes the final say of the Court as expected, once-guaranteed abortion rights codified by the Roe v. Wade decision in 1973 will cease to exist. It will be up to each individual state to decide whether to ban or allow abortions, and experts forecast about half of U.S. states would implement bans. This means abortion clinics for an estimated 41 percent of women of reproductive age would close, forcing women who have the resources to travel elsewhere.

"We know we can't trust the Supreme Court to protect reproductive rights, so California will build a firewall around this right in our state constitution," Governor Newsom said.

Just as many states are doubling-down on efforts to secure bans and then some in the event Roe v. Wade is overturned, many states — like California — are taking action to ensure anyone can access abortion in the state, and secure abortion rights. The Golden State's governor Gavin Newsom has long pledged that the state would become a "sanctuary" for people seeking abortion care. But news of the leaked opinion has resurfaced efforts and pledges to do so. For example, Newsom recently proposed an amendment that would "enshrine the right to choose" in California's constitution.

RELATED: How to access abortion in a post-Roe world

"We know we can't trust the Supreme Court to protect reproductive rights, so California will build a firewall around this right in our state constitution," Newsom said in a statement. "Women will remain protected here."

Come November, California voters will be asked if they support a constitutional amendment to ensure permanent abortion access in the state. But that's not all California legislators are doing to widen abortion care for all. In March, Newsom signed a law to make abortions less expensive for people on private insurance plans. California state Sen. Tem Toni Atkins (D-San Diego) introduced a bill this year that would allow nurse practitioners to perform abortions without the oversight of a doctor. These collective efforts are taking place to support an anticipated surge in out-of-state patients seeking abortion care.

Lisa Matsubara, Vice President of Policy and General Counsel of Planned Parenthood Affiliates of California, told Salon that California has been in the process of preparing for Roe v. Wade to be overturned for quite some time, since the passage of a draconian anti-abortion law in Texas in 2021. Matsubara agreed it is a little difficult to know what the impact on California would be depending on what the final Supreme Court opinion is regarding the constitutionality of a Mississippi state law that prohibits abortion after 15 weeks of pregnancy.

"It could mean that overnight, we're going to see 26 states pretty much go dark," Matsubara said, "or it could potentially mean if the Supreme Court ends up not completely overturning Roe, which might be more of a piecemeal approach over the course of several months."

According to a Guttmacher Institute report, California could see a 2,923% increase in number of women whose nearest abortion provider would be in California.

Matsubara was circumspect about making any predictions, but said the state would be ready for an influx. "I think it's a little bit hard to tell what exactly the the number of folks that might be traveling to California or really any of the states where abortion will remain legal will look like, but a lot of the efforts that we're currently doing right now is to make sure that we can build capacity and that also have the ability to increase capacity as needed," she said.

According to a Guttmacher Institute report, California could see a 2,923% increase in number of women whose nearest abortion provider would be in California. Many who would come from Arizona, which is almost certain to ban abortion outright. While this would certainly put pressure on California's abortion-care providers — as more than 40 percent of California counties do not have clinics that provide abortions — it would be a welcome trend.

But can California clinics and providers handle it?

"I think that's the question of the hour," Flor Hunt,  the executive director of Training in Early Abortion for Comprehensive Healthcare (TEACH),  which provides training inn reproductive healthcare and networking for a number of Northern California Family Medicine residencies, told Salon. "I think everybody in California is trying to prepare, and there's certainly a lot that we're doing to try to increase capacity to be able to mobilize capacity in the event that Roe is overturned, but I don't think anybody really knows what that is going to mean, and how many patients we're going to be seeing."

As reported by CBS News, Southern California Planned Parenthood clinics reported that they saw an increase in patients after the Texas post-six-week abortion ban. Many advocates say that was a preview of what's to come.

"SB 8 of Texas gave us a sense of what the impact was on neighboring states," Hunt said. "There's a statistic around wait times increasing 25-fold in the neighboring states, but I think that as California is trying to mobilize and prepare, we're all a little bit in the dark about the degree to which we need to increase capacity and what that's really going to look like."

Hunt added that medication abortions and telehealth appointments have made in-person procedures a little less necessary. As part of the recommendations from the California Future of Abortion Council, which includes a list of possible legislations the state should adopt in order to prepare, one recommendation is to offer medication abortions in other states via telehealth.

Hunt said TEACH is working closely with their clinical partners to staff clinics in the event that a large increase in patients occurs.

"So we've been having conversations with the training partners that we work with about their staffing needs, and talking about how we can increase capacity, staffing their clinics with our preceptors," Hunt said. "Also that provides more training opportunities, which means that more residents are getting trained in abortion and then will be ready to graduate with the ability to provide care once they're done with residency as well."

Hunt added that they also have a training program for teaching how to prescribe medication abortions open to all clinicians, such as family practitioners, who may not be trained. Indeed, if abortion clinics like Planned Parenthood see an increase in out-of-town patients, it would be best to deal with the increase in number abortions by enabling other types of clinicians to treat such patients.

"Family planning clinics play a hugely important role in providing access to abortion care, but Californians should also be able to find access to abortion care when they go to their primary care provider," Hunt said. "We believe really strongly that abortion is essential healthcare, it should be included in primary care and we want to help clinicians who want to be able to provide that care to do so."