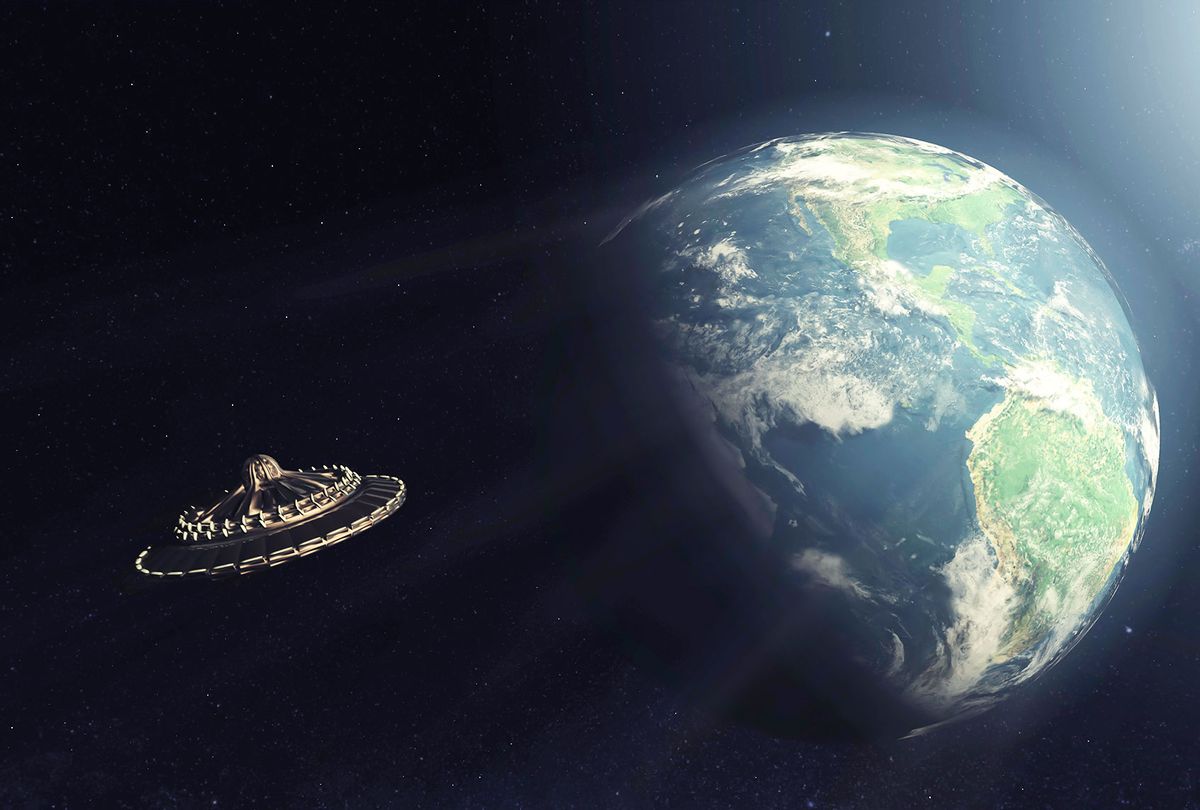 On a single photographic plate from April 12, 1950, nine dots of light appear in a row in the night sky. To an uninformed eye, they appear unremarkable, perhaps nothing more than technical errors. Yet this particular photographic plate was produced as part of a larger project to photograph the night sky from California's Palomar Observatory Sky Survey. When lights appear and then disappear without explanation, they are known as transients, and astronomers seek explanations.

This is especially true as UFO sightings have become both more frequent and more effectively documented. Indeed, a group of scientists is arguing that the nine lights of these plates — which were taken seven years before the Soviet Union launched the first man-made satellite into space — could be evidence of extraterrestrial life. (Emphasis on could: there is nothing definitive that says these are alien craft.)

"Their presence supports searches for other, clearer signatures of potential debris and satellites in orbits around Earth," a research team led by Stockholm University's Beatriz Villarroel wrote in a recent paper for the scientific journal Acta Astronautica. "The best way to search them, is obviously by looking at images taken before human-made objects were sent to orbit the GEOs." (GEOs is a shorthand term for geosynchronous Earth orbit, meaning satellites that orbit in the ring around Earth above the equator and move at the same rate that Earth rotates such that they appear at fixed points in the sky to an Earth-bound observer.)

The number of transients in these photographic plates, the authors write, is "far higher than expected" from known natural phenomena that exhibit similar behavior.

This is not the only paper on the subject written by Villarroel and her team. They note that the objects in the old photos could not be asteroids or meteors, as they would either be too dark to show up or appear like streaks. After some research, they confirmed that the lights could not have been caused by airplanes or other astrophysical explanations. Since man-made satellites didn't exist at that point, another explanation could have been nuclear testing. But, to the best of our knowledge, that was not happening at the time and place where the plates were taken.

This is why, in a paper published in the journal Scientific Reports last year, Villarroel and her team explain precisely why the lights in this particular plate are so intriguing to them.

The number of transients in these photographic plates, the authors write, is "far higher than expected" from known natural phenomena that exhibit similar behavior in photographs, such as "flaring dwarf stars, Fast Radio Bursts, Gamma Ray Bursts or microlensing events."

They concede that the lights could have been caused by contamination in the plates themselves, and would therefore be technical artifacts rather than anything otherworldly. Yet "if contamination as an explanation can be fully excluded, another possibility is fast solar reflections from objects near geosynchronous orbits," the authors add. They also suggest comparing images from another sky survey done in the 1950s to see if that one also shows multiple transient objects appearing all in a line.

In a paper published last month to the pre-print server arXiv.org, Villarroel and her team explained that the transients are scientifically significant even if they do not have an extraterrestrial origin. As the scientists explained in the conclusion of that paper, "there are still uncertainties that preclude a definite answer even if the authenticity of the transients eventually is confirmed, and one of these is to fully understand the phenomenology behind simultaneously appearing and disappearing point sources, that may originate in a entirely different process." In other words, these old images of flickering objects are definitely still weird by today's standards, and could yield new astronomy discoveries regardless.

These papers follow a recent trend in which serious politicians and scientists have become more openly curious about the question as to whether extraterrestrial intelligence may have ever visited Earth. Earlier this month, a congressional hearing on UFOs revealed that UFO sightings have become increasingly common among military personnel. As Deputy Director of Naval Intelligence Scott Bray explained, "Since the early 2000s, we have seen an increasing number of unauthorized and or identified aircraft or objects in military-controlled training areas and training ranges, and other designated airspace reports of sightings are frequent and continuing." There are a number of possible mundane explanations for these UFO sightings, from natural atmospheric phenomena and atmospheric clutter to secret government technology programs.

Meanwhile, declassified Pentagon documents that were revealed to the public in April showed that the U.S. Department of Defense had conducted a program monitoring reports of human encounters from 2007 to 2012. These documents revealed, among other things, that people who alleged UFO encounters frequently displayed similar symptoms: Heart ailments, sleep disturbances, and symptoms consistent with exposure to electromagnetic radiation (such as burns). Former Senate Majority Leader Harry Reid has also been outspoken about the fact that companies which comprise the military-industrial complex have UFO fragments.

"I was told for decades that Lockheed had some of these retrieved materials," Reid told The New Yorker last year. "And I tried to get, as I recall, a classified approval by the Pentagon to have me go look at the stuff. They would not approve that. I don't know what all the numbers were, what kind of classification it was, but they would not give that to me."

For more Salon articles on UFOs: