So who are "evangelicals"? And how did they become such massive hypocrites?

As a true believer in an Invisible Guy in the Sky, I'm here to explain how evangelicals became enemies of Jesus 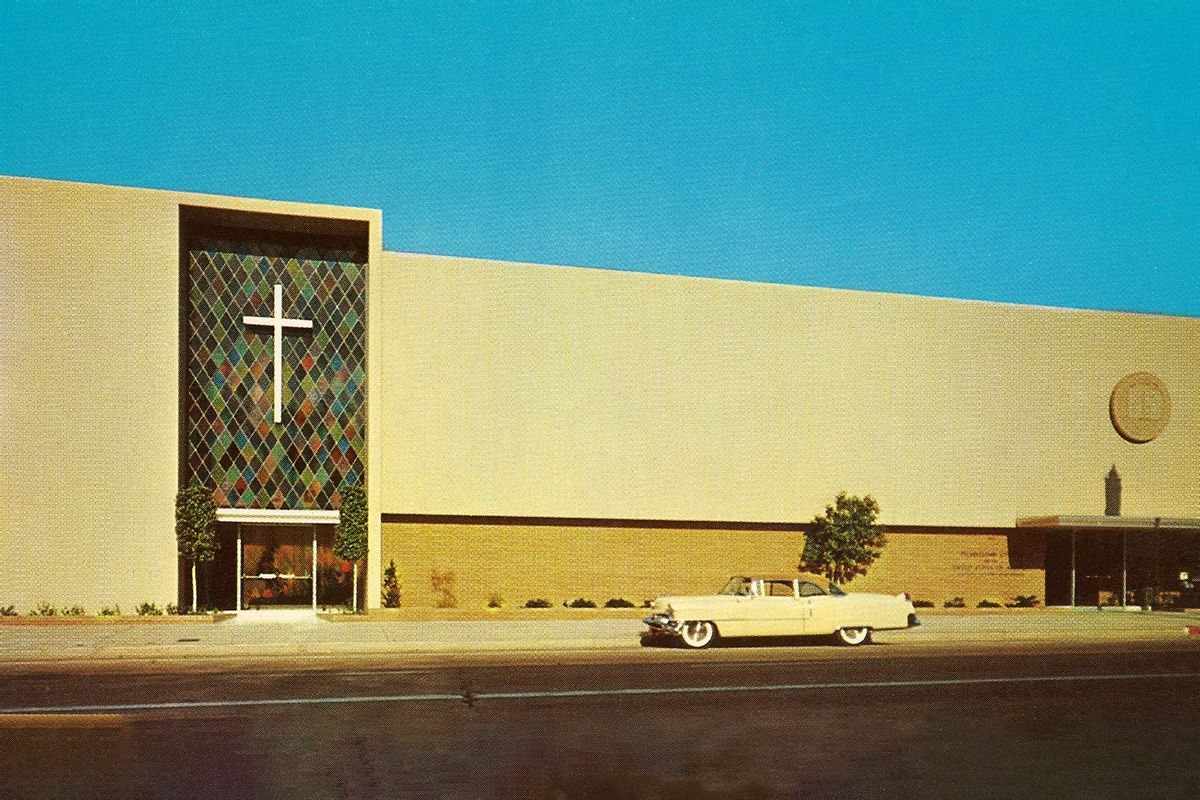 Vintage photograph of a yellow car parked in front of a large mid-century mega-church in the 1960s. (Found Image Holdings/Corbis via Getty Images)
--

So who, what, why and how is an "evangelical"? I often forget after all my years of growing up in the church, going to an evangelical seminary and my work in ministry, that many or perhaps most Americans have little knowledge and understanding of the evangelical movement, the Christian faith and how it all connects to American culture and American politics. I would say that most Americans are frustrated at the disproportionate influence and political power that evangelical Christians hold. For some the frustration is more personal because of how they've been treated by the church types. Either way, this mysterious species — the evangelicals — seem to be a major problem in American society. As a trained evangelical, and an ordained minister, I would have to say I completely agree.

Who are these evangelicals? First off, their true ancestors are the Pharisees of the New Testament, whom Jesus describes as being obsessed with legalistic questions but neglecting "the more important matters of the law — justice, mercy and faithfulness." This is the primary group that had Jesus killed. Much like the Pharisees, today's American evangelicals do not represent the faith in any genuine way. They have done more damage to the name of Christianity than any group I can think of. Their misuse of the Christian faith as a political weapon against anyone they see as an enemy is driven primarily by greed and a thirst for power.

The sheep who follow the most prominent evangelicals are also guilty of refusing to question these so-called leaders of the Christian faith. They should be measuring their pastor's words and deeds against the life and teachings of Jesus Christ. Attending church does not mean we check our brains at the door.

Currently and historically, evangelicals are a political action committee with an agenda based on hate, condemnation and self-righteousness. They have nothing to do with the foundations of the Christian faith.

What are these evangelicals? Currently and historically, they are nothing more than a political action committee. They have nothing to do with the foundations of the Christian faith. Their political agenda is based on hate, rejection, condemnation and self-righteousness. The biblical Pharisees, who were the enemies of Jesus, used their political connections to have him killed. In our own time, these new Pharisees use their enormous political influence to reject foreigners, deny health insurance to millions, judge the poor as lazy, refuse any and all regulation of deadly firearms and stand in opposition to equality of opportunity. In short, they stand side by side with the oppressors on virtually every issue.

Why are there evangelicals? As with the Pharisees of the time of Jesus, these evangelical leaders formed a group because their version of the faith was being pushed aside. The Pharisee movement arose during a time of perceived or actual moral decadence in the Roman Empire, which the evangelicals also believe is occurring today in America. Evangelicals panicked at the rise of the "social gospel" when it became the driving force behind the civil rights movement of the 1960s, and panicked further with the largely secular feminist movement and LGBTQ Pride movement. Evangelicals could see their power and influence waning and immediately went into action.

In the last 40 years, America has provided enough political ammunition for these evangelicals to swing almost every election, dating back to Ronald Reagan in 1980. In that decade, AIDS was seen as God's judgment on the gay lifestyle, while cultural phenomena from Madonna to Howard Stern to hip-hop and increasingly open discussion of sexuality all became symbols of America's fatal decadence. In the '90s, evangelicals became obsessed with Bill Clinton's various scandals, TV shows that depicted gay characters or women who had abortions, and still more rap music (and video games). In the 20 years since then, evangelicals have fought a long battle to re-criminalize abortion (which they are winning), along with brand new issues like public bathrooms, health care for trans teenagers and how we teach about America's racial history or issues of sexuality in school. And then came their savior, in the form of Donald Trump, to solidify their hypocritical faith.

"Woe to you, teachers of the law and Pharisees, you hypocrites!" says Jesus in Matthew 23. "On the outside you appear to people as righteous but on the inside you are full of hypocrisy and wickedness."

How are the evangelicals? As a believer myself in the Invisible Man in the Sky who is keeping score, I must admit that the church doesn't tend to draw in people who like to question things. As a result, when thousands of evangelical preachers push forward a message that has no basis in the most fundamental elements of the Christian faith, the sheep sometimes just say baaa. I believe that the most influential and most political pastors within the evangelical community, like Franklin Graham and Robert Jeffress, deliberate pursue this misleading approach. They are enemies to the true message of Jesus — and to America.

Evangelical leaders are focused on making their followers feel righteous and good by pointing out others who they claim are  visible and measurable enemies of God. In targeting abortion providers, the LGBTQ population and other unacceptable or "radical" forces, evangelical leaders have made billions of dollars, acquired political power out of all proportion to their numbers, and built massive churches with televised services and parking lots the size of football stadiums. None of these issues are actually based on the Christian faith or the Bible — indeed, many are directly contrary to it — but who cares about small details like that?

By targeting abortion, LGBTQ rights and other "radical" forces in society, evangelical leaders have made billions and acquired massive political clout. None of that is based on the Bible.

So now what? I'm not really sure. Exposing evangelical hypocrisy has been a crusade of mine since I listened to my first youth pastor say a lot of weird things about sex. He seemed a little too concerned with whether or not I masturbated or not. I was a 14-year-old boy feeling a little out of control at the time, so my answer remains private to this day. Either way, in the wake of its unholy union with Donald Trump, I'm afraid that it is too late to save the evangelical church. Their leaders have sold what remained of their souls for one last shot at political power. Among the few who do not support Trump publicly, most would probably still vote for him if he runs for president again.

History teaches me that in time, these people will lose. I remind myself of the millions among the faithful who still believe in welcoming the foreigner, healing the sick, serving the poor and fighting the oppressors. I am mostly grateful that I am not alone in my faith and philosophy. It's just that most of my brothers and sisters who share my most important views don't go to church anymore. Many don't believe in God. I'm all right with that. Those have always been my favorite people anyway — and as Jesus says, those are not the most important "matters of the law."