Too hot to handle: Crumbling US infrastructure melts under excessive heat

"When people are no longer able to work as many days outside, those are sort of the things that will prompt" action 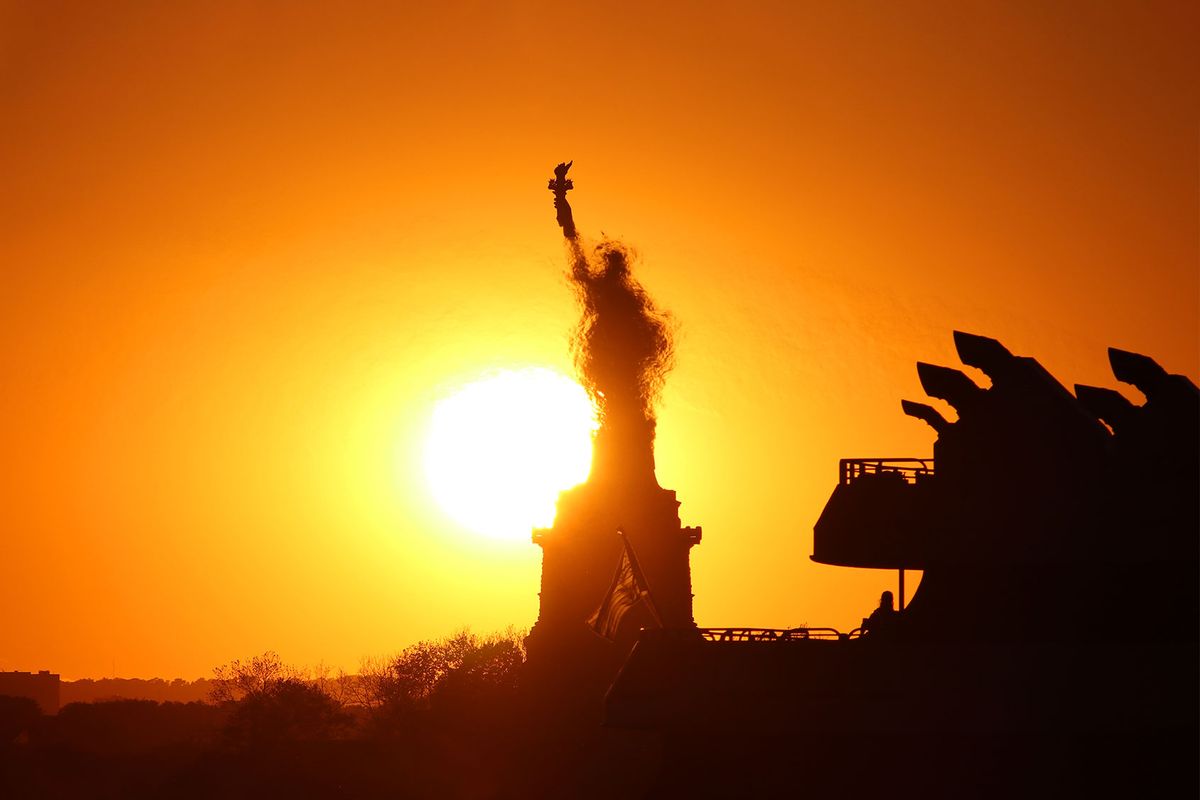 The sun sets behind the Statue of Liberty as it is partially obscured by heat waves from the exhaust of a passing ferry on May 31, 2020, in New York City. (Gary Hershorn/Getty Images)
--

Scorching temperatures caused Philadelphia public schools to suspend classes this week, while dozens of schools in the Baltimore area issued sweeping closures amid the blistering heat wave currently blanketing the Northeast. More than 35 million people have been put on a heat advisory. But as of this June, eighteen schools in Baltimore, which was just two years ago rocked by a 25-day stretch of 90°F weather, breaking a 150-year record for the city, still do not have air conditioning, while as many as twelve have air conditioning that doesn't work.

But despite the frequency with which these hot spells arrive, the city's school system remains loath to adjust. It's a state of affairs that causes routine headaches for parents, some of whom might not have the bandwidth to take care of their kids during school hours. Disruptive as school closures might be, they are just one of the many ways that extreme heat – and its precipitous rise – are expected to take a cataclysmic toll on urban life in America.

All across the country, hundreds of cities like Baltimore are slowly transforming into what experts call "urban heat islands," cities that endure higher temperatures than their outlying rural areas. This phenomenon, which has been studied for decades, is largely driven by the fact that cities are replete with infrastructure like roads, bridges, sidewalks, and buildings, all of which are made of materials, like concrete and metal, that absorb the sun's rays and warm up the surrounding air. Additionally, cities are notorious for being relatively bereft of trees and plants, which help offset warming through evaporation and provide natural forms of shade.

But that's only one part of the equation. Because urban areas tend to be densely populated, they also are full of human activity and machinery that emits heat. Chinese researchers found in 2015, for example, that combustion engines in cars raise the temperature in Beijing by more than 1.8°F. To accommodate for that slight increase, many urban dwellers would be inclined to turn on their air conditioning. But it's estimated that air conditioning units emit enough heat in cities to raise the temperature by roughly the same amount. Needless to say, any meaningful strategy for climate action in cities is going to require an unprecedented overhaul in urban planning.

RELATED:  We now know how badly our cities will be flooded due to climate change

Throughout the world, current levels of warming are already a catastrophe. In April, the United Nations (UN) revealed in a bombshell report "a litany of broken climate promises" by businesses and governments that had pledged in the Paris Agreement to keep the average rise in the global temperature well below 3.6°F. On the whole, it found that big emitters are continuing to spew greenhouse gasses into the atmosphere at a rate that will make it near-impossible to reverse the course of climate change. "Honestly, this [report] is our last warning," Dr. Luna Khirfan, a lead author for the infrastructure section of one of the Intergovernmental Panel on Climate Change's recent assessment reports, told Salon in an interview. "The science is in front of us."

The impact of this crisis is felt acutely in cities, where much of the infrastructure is at risk of breaking down in hot temperatures, leaving thousands without reliable access to transport and electricity.

In Portland, 90-degree-plus temperatures caused the city's light rail cables to sag last year, temporarily shutting down a large segment of the city's mass transit system. A similar crisis unfolded around the same time in Spokane, Washington, where the temperature reached a staggering peak of 109°F, forcing one utility provider to deliberately cut power as a result of unprecedented demand for energy. And all across the Pacific Northwest, high heat caused roads to buckle and power lines to melt in what experts dubbed a "heat dome," where hot ocean air gets trapped over one specific area for weeks or even months at a time.

These kinds of calamities are not yet the norm across the board in the U.S., but experts believe they could become incredibly commonplace in the coming decades, largely because state governments remain unwilling to adapt.

In Texas, which suffered a major power crisis as a result of a severe winter storm last year, residents are especially vulnerable to heat-induced outages because the state operates exclusively on one power grid to avoid federal regulations. If that grid fails (due to outsized demand in the summer), millions of Texans could be left stranded without power because the state is not authorized to borrow energy from other states.

While many of the problems associated with urban hot spots are hyperlocal and city-specific, they are also globally ubiquitous. By the end of this decade, 60% of humanity will live in urban areas, where hot spots have come to dominate. Hot summer conditions are making some urban areas nearly unlivable, and experts are concerned that migration may be the only option in maladapted areas.

"There are places that will become inhabitable because of extreme heat," said Khirfan. "If these conditions are going to happen more frequently … then you will have people who will have to leave. They can't live there anymore."

RELATED: The "Doomsday Glacier" may partially collapse. If it does, Earth's sea level will rise by 2 feet

Since 2015, the world has already seen the seven hottest years ever recorded. Even during La Niña, when oceanic and atmospheric temperatures tend to reach their coldest extremes, this trend has continued. How current heat waves factor into the global average remains to be seen, but another record-breaking year is indeed possible. And at this point, the future of humanity hangs almost entirely upon how global society reacts to climate change.

One silver lining of prolonged and severe heat waves might be a greater concern around climate change. According to Pew Research Center, a large majority of Americans now believe climate change is not only real but personally impacts them. However, the degree of that impact is shockingly disparate along the lines of race and class.

RELATED: This is how climate change will shift the world's cities

Susanne Benz and Jennifer Burney, both researchers at the University of California, San Diego found that low-income neighborhoods and communities of color deal with markedly higher temperatures than their white and wealthy counterparts. According to their study, which analyzed the land surface temperatures of 1,056 counties that are home to roughly 300 million Americans, the temperature delta between low-income and high-income can be as high as 7°F during the summer months.

Setting aside the fact that excessive heat is uncomfortable, it may also be a risk factor for other health and economic ailments, Benz told Salon. For example, high temperatures can negatively impact sleep quality, which can lead to a panoply of other health issues, like cognitive impairment, high blood pressure, and diabetes. There's also a growing body of evidence to suggest that heat might be contributing to our propensity for violence.

Asked about how cities could bring temperatures down, Benz stressed the need for more green spaces.

"The flip side of going along with high-density housing is providing green space to sort of offset that," she said in an interview. "And that's going to take explicit policy that doesn't look like it's cost effective if you don't take into account things like loss of productivity [and] health effects that come with exposure to extreme heat, whether in the daytime or at nighttime."

"The fact is, we allow people in this country to buy environmental quality," she added. "And that's why we see what we see in terms of where the green space is."

Dr. Eric Chu, who is leading the urban planning section of the Fifth National Climate Assessment for the U.S. Global Change Research Program, similarly emphasized the need for "passive ventilation," where the removal of hot air is facilitated naturally, without machinery like air conditioning.

Because climate change is so enmeshed in politics, Chu suggested, it's not likely that state and federal lawmakers are going to initiate the structural reform that's needed.

"What we see is that, actually, local and regional governments are stepping up across many states where there's impasse at the state level," he said. "When people are no longer able to work as many days outside, those are sort of the things that will prompt local governments to act."