The bonkers Indian action flick with tigers, motorcycles and an epic dance-off needs to be seen to be believed 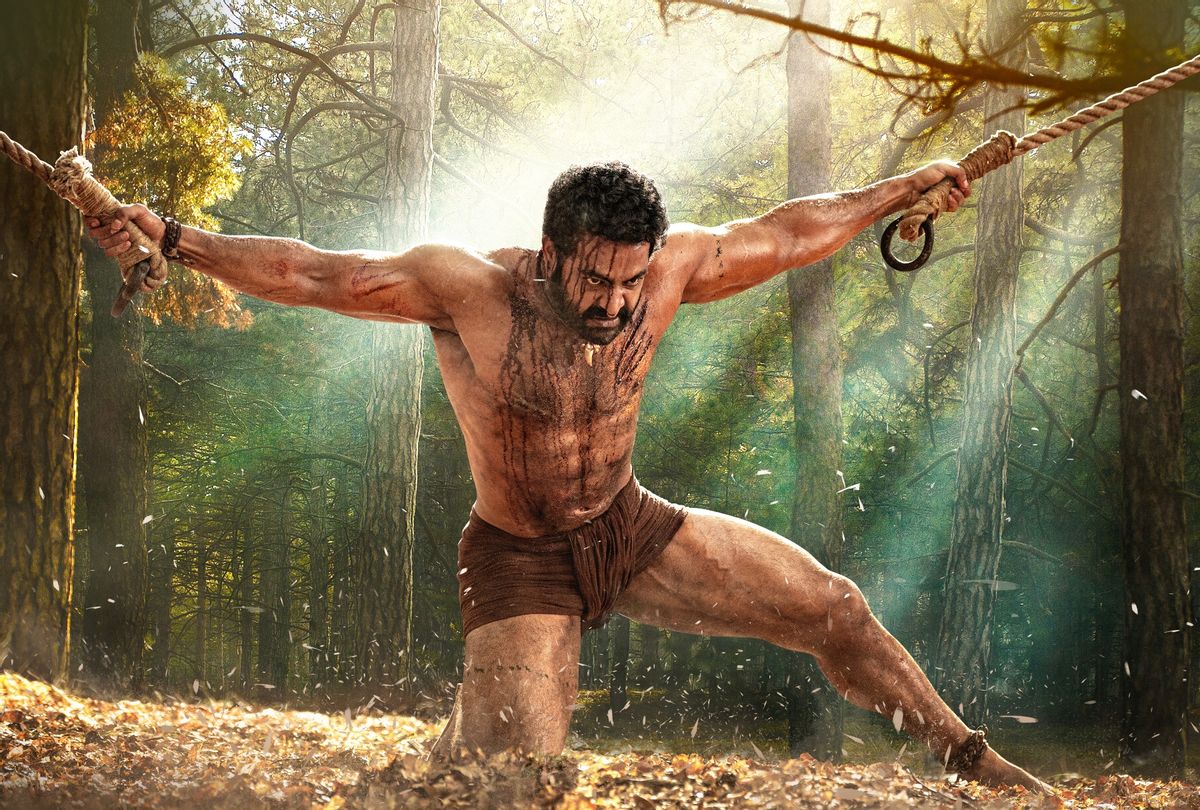 No description of S. S. Rajamouli's action sequences in "RRR" could ruin the experience of seeing them for yourself. For example, telling you that N. T. Rama Rao Jr.'s hero Komaram Bheem swings a motorcycle over his head like it's a laundry bag full of dry socks sounds ludicrous. But by the time you see Bheem do it, you've come to accept this as part of an expansive range of his capabilities.

This scene occurs long after Ram Charan's Alluri Sitarama Raju has leaped into a raging crowd of workers, battling through its crush to seize a man his boss demands to be arrested. Calling it that, a battle, barely covers all the femur-fracturing and skull-crushing it takes for Raju to succeed in his task.

Even saying this leaves out the acrobatic precision Charan engages in this nearly 10-minute sequence. Rajamouli made "RRR" in a way that ensures words will fail the potency of his vision. That's even true of discussions about its three-hour, seven-minute runtime, 40 minutes of which transpire before the title card appears for the first time. None of that amounts to padding.

RELATED: No, "Top Gun" isn't an anti-woke success story, but rather a tribute to aging Tom Cruise and balls

Simply put, "RRR" is one of the best action blockbusters you'll see this summer. This may seem like bold talk in a moviegoing landscape currently dominated by "Top Gun: Maverick," another action opus wearing its nationalism on its star's cut biceps. In terms of its earnings, "Maverick" is dominating the domestic box office and is closing in on 2022's third-highest grossing movie on the global box office charts, the Chinese feature film "Water Gate Bridge."

"RRR" may not achieve similar economic success, although its $72 million budget makes it one of the most expensive, if not the most expensive, Indian film ever made. Maybe that doesn't matter in the larger scheme of things, since it employs the similar strategy of mass appeal as Tom Cruise's latest extravaganza while tapping into the fervor of cultural pride.

"RRR" is a Telugu-made film overdubbed in Hindi for its Netflix run. In English, the title's acronym stands for "Rise, Roar, Revolt," blaring expectations related to pacing, spectacle, and explosiveness that Rajamouli exceeds.

When we don't see our heroes in action during that 40-minute cold open, he's setting up the terms of the conflict to come.  And when they're not fighting or speeding down roads together, with Bheem on his motorcycle and Raju on his horse, they may be singing.

The crown gem of the story's bright side, before their friendship falls apart – which is not a spoiler – is the fleet-footed dance number "Naatu Naatu." This is Bheem and Raju's response to a racist British man's claim that Indians are clumsy and uncultured, demonstrated by skipping through a few Eurocentric dance steps, by out-hoofing him and all the other white people around them.

Eventually all the pompous white guys collapse, leaving Bheem and Raju as the last men dancing – and furiously at that.

"RRR" spreads its arms wide to bring multiple aspects of the summer blockbuster into its bear hug: it's an action masterpiece that's also a musical.

It's an anti-colonialism commentary whose heroes validate the brown people's struggles around the world while distinctly upraising Indian pride. It's a hearty bromance, where the platonic friendship between the two principal characters is treated with more tenderness than the warmth they demonstrate toward their romantic interests.

It is also transparently nationalistic, proved by its first major action sequence culminating in one of its heroes wrapping himself in India's pre-independence flag to protect himself from a scorching wall.

In case that zooms over our heads for most of its three hours, the final musical number, "Sholay," punctuates this with a wild and bright dance tribute to India's revolutionary heroes. "Fly that flag to which we've given our lives," sings its refrain. "There is an iron man in every lane and home. (Not everything about the film's release has been flawless. When the film was released in India earlier this year, it omitted a Kannada language translation. And  "Sholay" has been criticized for omitting Mahatma Gandhi in its gallery of revolutionary icons.) 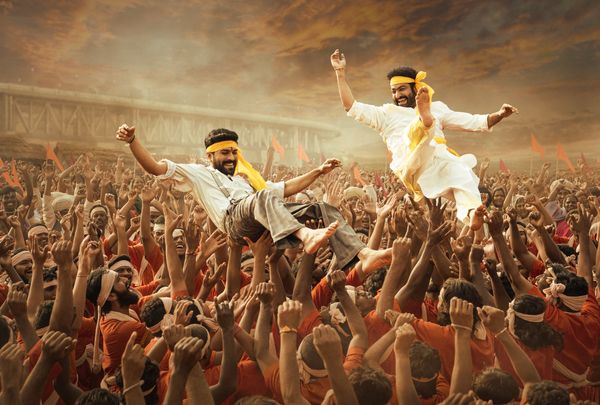 Ram Charan as Alluri Sitarama Raju and N.T. Rama Rao, Jr. as Komaram Bheem in "RRR" (DVV Entertainment)Rama Rao Jr.'s protagonist and Charan's are named after two real pre-independence era revolutionaries although, as a wordy disclaimer stresses before the film begins, its early 20th-century era adventure is entirely fictional. This may be to quell concerns that audiences lacking knowledge of India's history might see some of this as fact as opposed to an exaggerated trifle that's about as true as "Harley Davidson and the Marlboro Man" or "Abraham Lincoln, Vampire Hunter."

"RRR" introduces Charans Raju as an Indian police officer working for the British security forces, and his focused brutality is driven by an obsessive urge to rise in the ranks, regardless of the scores of countrymen he must hurt or betray to earn that achievement.

But that doesn't seem possible until he receives a mission to track down a man who means to harm the region's British governor Scott Buxton, played by Ray Stevenson.

The mission Raju's quarry is undertaking doesn't matter to him – but it does to the audience, whose first introduction to the governor and his wife Catherine (Alison Doody, best know for playing Nazi villainess Elsa Schneider in "Indiana Jones and the Last Crusade") shows the Buxtons tossing a villager a couple of coins to compensate for absconding with her daughter, Malli (Twinkle Sharma).

If there's one fact "RRR" nails home is the monstrosity and barbarity of white colonization.  In this scene, Catherine views the girl as a trinket -- "I want to have this little package on our mantelpiece," she whispers to her husband, freshly returned from slaughtering every ungulate in the region. When Malli's mother throws herself in the path of the governor's motorcade, Scott delivers a pompous lecture to his soldiers that declares his brown subjects' lives are worth less than a bullet.

But Malli is a member of the Gond tribe and under the protection of that people's unstoppable "shepherd," Bheem, who has a reputation of never giving up until his lost lamb has been returned to the flock. Raju and Bheem's first meeting is a literal clash between fire and water, but movie theatergoers awash in Marvel superhero flicks also recognize it as a good old team-up. Neither is aware of who the other is when they collaborate to save a child, swinging together over a river that has burst into flames.

Victory in battle quickly forges an intense friendship between the men that, as the film's first big musical number foreshadows, is destined to end in bloodshed.

When Americans groan about feeling every minute of a long movie, they're not picturing Rajamouli's interpretation of that expression. His script, a collaboration with his father, V. Vijayendra Prasad, stuffs each sequence with feeling while skipping over details that would explain whatever inconsistencies may trip up his main characters' stampede toward an emotionally trying juncture.

This trusts the audience understands he's creating a saga heavily emphasizing showing, and feasting on the show, instead of telling, a style he perfected in his previous hits, 2015's "Baahubali: The Beginning" and its 2017 sequel "Baahubali 2: The Conclusion." If you've taken in those wonders, you may not be taken aback by some of Rajamouli's narrative structural choices in this one.

American action icons can fall back on their gun show, but "RRR" meets that image and raises it with stunts reliant on actual muscularity.

But seeing them isn't a prerequisite to understanding "RRR." All that's required is an appreciation for the director's aptitude for wielding visual chaos with the delight and vigor of an orchestra conductor. Rajamouli is a cinematic sensualist, something not often seen or appreciated in the action genre. It's one thing to interrupt an elaborate, "Bridgerton"-style formal affair with a weaponized menagerie and another level altogether to present it as a whirling dervish of fireworks, waterworks, gymnastics, and CGI wizardry.

Even the dangerous effects are sculpted to accentuate the physicality each man brings to his role.  The trailer gives us a taste of this, with shots of Rama Rao Jr.'s brick house physique and the enviable sheen in Charan's mane augmented by curling flames. Cruise and other American action icons can fall back on their gun show, but "RRR" meets that image and raises it with stunts reliant on actual muscularity.

Rajamouli liberally employs computerized magic and wire-work throughout "RRR"; the tiger and wolf Bheem faces down wearing nothing but short shorts are as real as that motorcycle he stops cold with a stomp before heaving it into the air. But there's plenty in the movie that can't be faked, such as the stars' unreal movements in the battle scenes.

All this somehow makes its history-inspired fabrication feel genuine and universal, caping the philosophy that ideals that make the common man super. "Our friends have come, so play the drums/Together we sing and dance and the world sways with us," say the lyrics of "Sholay," a rare moment in "RRR" that requires no exaggeration.

Raju and Bheem's individual and combined power isn't explained by exposure to Gamma rays or other cosmic forces, scientifically engineered serums, or elite government training. Whatever extreme feats of strength, agility, and dexterity they demonstrate are the result of years of bench pressing the weight of their people's pride and the epic myth that infuses Indian culture. The references are specific, certainly, but they leave the door open for the world to plug into the fable's energy.

"RRR" is playing in theaters in New York, Los Angeles and San Francisco, and streaming on Netflix.

Correction: After publication, the distributor clarified that "RRR" was released in hundreds of cinemas its native Telugu and is still playing in select cities.