Rating "Bridgerton" on its South Asian authenticity, from its hair oiling to the haldi ceremony

Part of embracing the fantasy that is "Bridgerton" is accepting a few flubs . . . for now 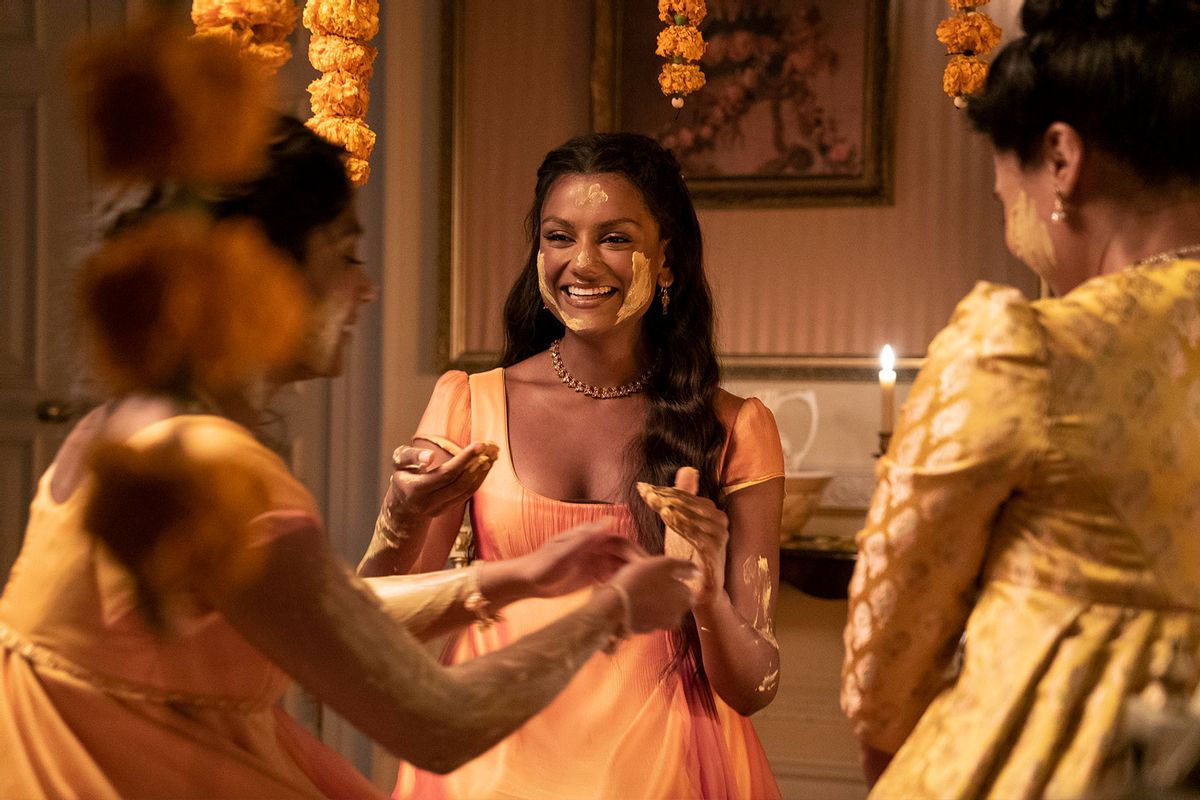 When news broke that the second season of "Bridgerton," Shondaland's sexy Regency-era scripted series, would feature a cast of South Asian leading ladies, I was elated. In a world where South Asian representation in Western media has either been offensive — like Apu Nahasapeemapetilon from "The Simpsons" — or blatantly whitewashed — like Max Minghella's Divya Narendra in "The Social Network" — it was about time that I saw characters who not only looked like me but were also not mere caricatures.

This season accomplishes exactly that with the Sharma family, comprising Lady Mary Sheffield (Shelley Conn) and her daughters, Kathani "Kate" (Simone Ashley) and Edwina (Charithra Chandran). The trio, adorned in silk dresses, sheer lace gloves and gold jhumkas, make quite the appearance before the Ton. While the reason for their recent return to England from India remains a mystery, it isn't enough to ward off Viscount Anthony Bridgerton (Jonathan Bailey), who sets his sights on marrying Edwina — the season's prized diamond — when his heart actually desires her older sister.

RELATED: Secrets of a gossip writer: The unchecked power of Lady Whistledown on "Bridgerton"

Aside from the steamy love triangle, "Bridgerton" this season is full of nods to South Asian culture and customs, which I took a keen interest in, not having seen these in mainstream American media. For the most part, it was a thrill to see such familiar practices or hear phrases that I've only encountered with my family. But as with most attempts at increasing diversity, the first forays into inclusion can be inconsistent or awkward at best or downright offensive at worst.

Fortunately, the "Bridgerton" attempts at inclusion fell into the former category, which is to say, I give it a B-minus for effort. I break it all down below: 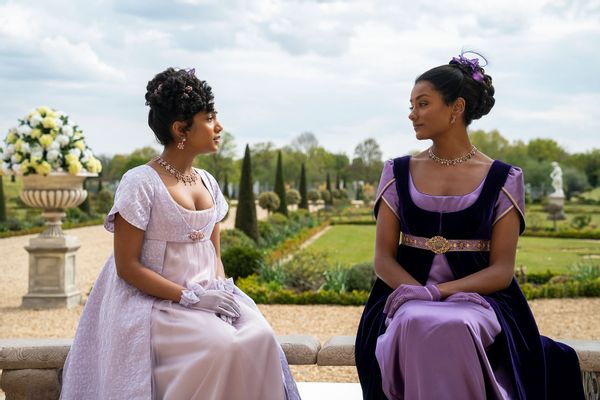 Charithra Chandran as Edwina Sharma, Simone Ashley as Kate Sharma in "Bridgerton" (Liam Daniel/Netflix)In one scene, Kate rubs warm hair oil into Edwina's long, wavy tresses to maintain their glossy shine. It's a familiar technique that I've been following since childhood, slathering Dabur Amla hair oil or good ol' coconut oil after a deep cleanse. Not only does it help moisturize hair, but it's also great for circulation. It's an integral part of the grooming regimen.

In a separate scene, Kate — who is not a fan of English tea — pulls out a sachet of crushed cardamom pods and cloves, sets the spices atop a strainer on her teacup and prepares herself a cup of masala chai. The process is an art form in itself and highlights just how gratifying that first sip of chai is (seriously, masala chai makes English tea look like a complete fool in comparison).

It's these everyday practices that feel the most authentic, where the Sharmas could just be themselves, and that's probably why they work. It seems that attempts to introduce more nuanced cultural practices or references are where the wheels fall off the carriage.

What works  . . . until it doesn't: the haldi ceremony 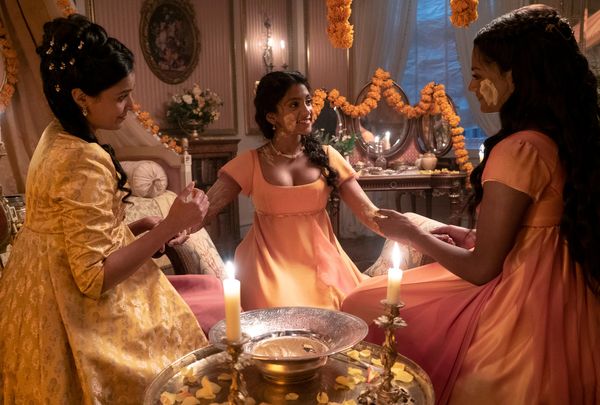 A haldi, or turmeric, ceremony is a pre-wedding ritual.

The episode "The Choice" opens with Edwina's haldi ceremony, where her mother and older sister apply fresh turmeric paste on her arms, face and neck before her wedding day. Everyone is dressed up in yellow — an auspicious color in Indian culture — and the room that they are all gathered in is adorned with marigold garlands and other sunny floral decorations.

A haldi, or turmeric, ceremony is a pre-wedding ritual in which the bride and groom are slathered with turmeric paste, which is usually made with sandalwood powder, milk or rose water. Turmeric, which is not only revered for its anti-inflammatory and antiseptic properties, is a symbol of good luck and prosperity in Indian traditions. The common spice, however, is known to leave behind prominent stains on anything it touches, whether it's clothes, kitchenware or skin and nails. After the completion of the ceremony, the paste is washed off, typically with water and warm oil, and leaves the soon-to-be-married couple with a divine, almost heavenly glow.

In this scene we're also treated to another culture nod. The Vitamin String Quartet renditions of pop songs have become a signature on "Bridgerton," and the show gives the same honor to a song familiar to many South Asians. An instrumental version of "Kabhi Khushi Kabhie Gham" (translation: Sometimes there is joy, sometimes there is sorrow), the title track from the iconic Bollywood film of the same name, plays in the background during this bonding experience.

Netflix compiled this season's instrumental covers in this handy YouTube video. Cue it up to 1:32 to hear "Kabhi Khushi Kabhie Gham":

So far so good, right? Well  . . .  just like the show portrays, the ceremony is an intimate affair with only family members and close friends in attendance. But what "Bridgerton" gets wrong is who applies the holy turmeric and who gets to proudly wear it.

According to my mother, aunts and cousins, the traditional custom is that only married women can apply turmeric on the prospective bride. So in this case, the unmarried Kate probably shouldn't have been the one smearing paste on anyone. However, modern-day haldi ceremonies, including the countless ones I've been to in the past, have ditched those strict practices, allowing close loved-ones to partake in the ritual. So I'll allow it this time. Kate doing the honors isn't that far out of bounds for such progressive Regency women trying to hold onto their customs in a foreign land.

Towards the end of the scene, however, a giddy Edwina decides to return the favor and says, "Is it not also said when spread on an unmarried person, haldi will help them find a worthy partner that makes the rest of the world quiet too?" She then smears the paste gently on Kate's face.

Edwina's impromptu actions are purely a "Bridgerton" fabrication. Haldi is only applied on the bride or groom (they're the ones getting married!) and not on unmarried women and girls. So Edwina's little remark to Kate does not apply. (And maybe this breach of etiquette is why Edwina's wedding was doomed from the start! So inauspicious.) 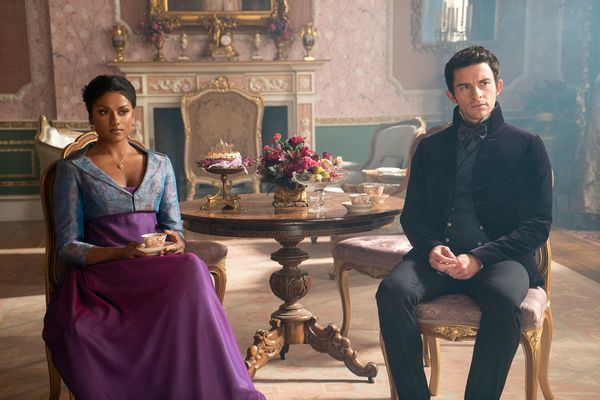 Edwina has mastered the "maruli" – or something

There's no such thing as a maruli.

Earlier in the season, Kate brags about Edwina to Lady Danbury (Adjoa Andoh) and details a laundry list of skills. In addition to having "exceptional posture" and a "beautiful smile," Edwina is well-versed in French, Latin, Greek and, of course, her native Marathi and Hindustani.

"She not only plays sitar and maruli, but pianoforte too," adds Kate.

The only problem is . . . there's no such thing as a maruli (unless Edwina invented her own instrument and is the only young woman who has mastered it. So accomplished!) However, a murali, also known as a bansuri, does exist and is a classical Indian side-blown flute. The elongated instrument, which is made from a hollow shaft of bamboo, is also associated with Lord Krishna, a prominent Hindu deity of protection, compassion, tenderness and love. Today, the murali is the world's most popular Indian instrument and a global spectacle.

We're just going to assume Kate garbled her pronunciation while trying to talk up her sister.

What, you've never heard of "Guhleeeb"? Well, neither have I!

Twitter critics were quick to point out that Edwina asking Anthony if he's ever read Ghalib, which she pronounces as "Guhleeeb," is another error. Another user also noted that Ghalib's significance in "Bridgerton" history makes no sense because the Indian poet, who was born in 1797, would have been just 16 years of age in the show's timeline (although Daphne did have her baby so a year has passed, so if it's 1814 maybe Ghalib would've been 17.) It's true that Ghalib began composing poetry at the tender age of 11, but he wasn't published until decades later. Neither Edwina nor Anthony could've read his work.

The hodgepodge of languages

Throughout the series, Edwina refers to Kate as "didi," which means older sister in Hindi, while Kate calls Edwina "bon" (albeit with an odd pronunciation), which means sister in Bengali. The sisters also refer to their father as "appa" and their mother as "amma," the generic terms for mom and dad that's mainly used in South India. And as mentioned before, the sisters can speak both Marathi — the official language of the Indian state of Maharashtra — and Hindustani — which meshes both Hindi and Urdu, the national language of Pakistan, into one tongue.

Yes, it's impressive that the show features a lot of languages across the South Asian diaspora. But the confusing part is that this diverse assemblage doesn't really match up with the Sharma's surname, which is common in the Northern states of India. Perhaps the name was chosen by the "Bridgerton" writers not for its geographical authenticity but because the sound recalls the family's original surname in Julia Quinn's books: Sheffield. Regardless, while listening to the various languages was fun, I couldn't help but think how unrealistic — and chaotic — it all really is.

In the end, "Bridgerton" may be set in Regency England, but it's probably better to see that as a fun suggestion (like a party theme) rather than a strict historical guideline. After all, people of color may have lived in England during that time, but they were not afforded the same access and privileges as we see enjoyed by the Sharmas and the Duke. So, even with all the discrepancies, I'm still happy to embrace the fantasy that is "Bridgerton" if it will give me a ballroom version of Miley Cyrus' "Wrecking Ball" and a love story starring women who look like me.