Despite some strides made in onscreen representation, white men still dominate these queer Christmas rom-coms 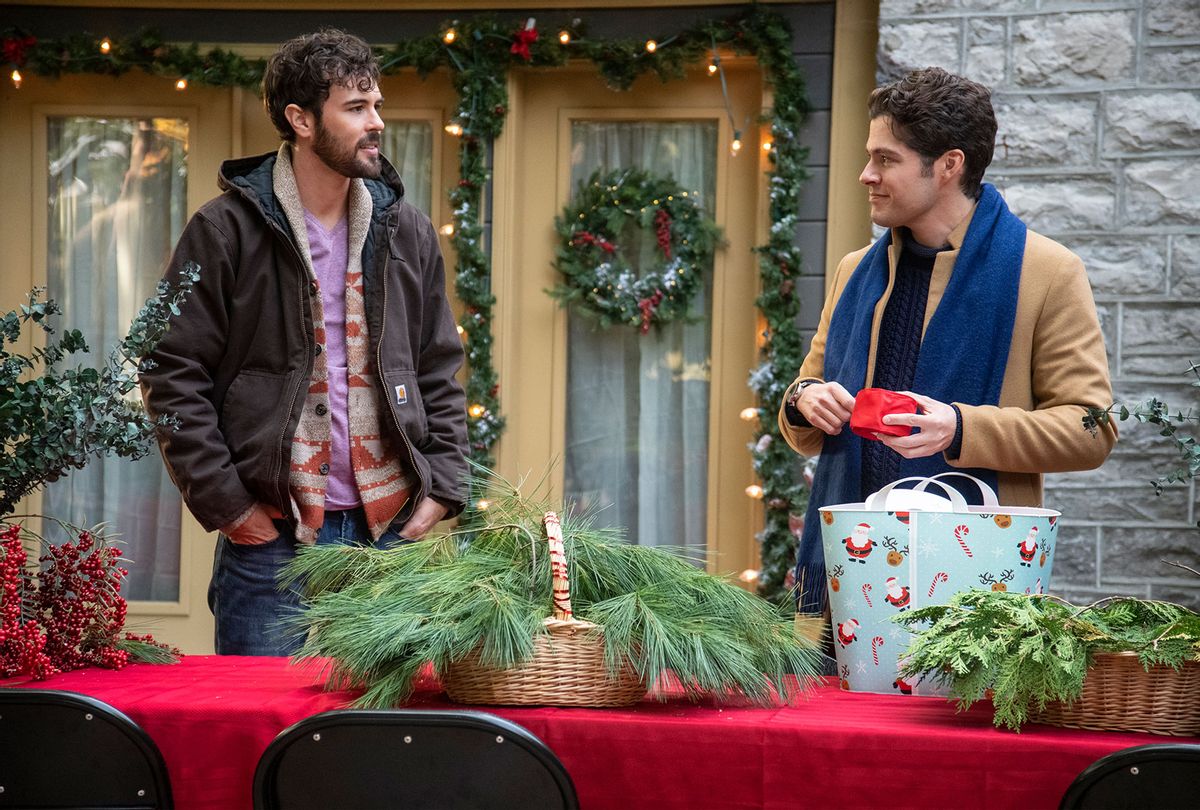 Blake Lee and Ben Lewis in "The Christmas Setup" (Lifetime)
--

In 2000, the Hallmark Channel aired its first original holiday-themed movie, "The Christmas Secret," about a professor who sets out to prove that reindeer can fly, and later meets Santa. In the 20 years since, other networks, notably Lifetime, have gotten in on the game, turning end-of-year programming into a nonstop marathon of tinsel, kisses and Christmas dreams coming true.

But the genre hasn't always brought good cheer to viewers, many of whom noticed a distinct lack of marginalized groups. As Salon's Amanda Marcotte pointed out last December, "running down this year's schedule of Christmas movie offerings is like a trip into an uncanny valley of shiny-teethed, blow-dried heteronormative whiteness, with only a few token movies with characters of color. It's like watching 'The Stepford Wives,' but scarier, since the evil plot to replace normal people with robots is never actually revealed."

Since then, TV's holiday movie fare fortunately hasn't been such a whitewashed Christmas, and that should be acknowledged and applauded. Moving past racial diversity, this year, the networks all apparently got the memo to try to queer up Christmas. It wasn't until 2019's "Twinkle All The Way" that a gay kiss was featured on-screen during the "It's A Wonderful Lifetime" lineup, but only as part of a subplot. Several months later, Hallmark announced that "LGBTQ storylines, characters, and actors" would be included in their 2020 films.

Now, 'tis finally the season! Salon took a look at what representation and inclusion on Hallmark, Lifetime and Hulu — which had the buzzy "Happiest Season" — looked like this holiday season. There are some high points, a few misses, and a little bit of the requisite schmaltziness.

This much-hyped romantic comedy stars Kristen Stewart as Abby, a graduate student who plans on proposing to her girlfriend, Harper (played by Mackenzie Davis), on their Christmas trip to meet her conservative parents, the Caldwells.

The catch? Harper lied to Abby about coming out to her parents, Ted (Victor Garber) and Tipper (Mary Steenburgen), and asks her to spend the next five days pretending to be her straight, orphaned roommate who simply tagged along because she had nowhere else to go. Anxieties are already heightened — both because of the holidays and Ted's freshly announced mayoral campaign — and the characters all have to grapple with the tensions sometimes associated with wanting the acceptance of your family while being true to yourself.

What's good: This is a mild spoiler, but Harper's family is largely awful (except for her sister Jane!), and when she's around them, Harper becomes pretty horrible, too — more on that in the next section. So, what really keeps the narrative from becoming an infuriating 102 minute-comedy of errors buoyed by a healthy dose of gaslighting are the characters in Abby's life who validate her and her feelings.

There's Riley (Aubrey Plaza), Harper's swoon-worthy, stylish and empathetic secret ex-girlfriend — whom, it should be noted, was outed by Harper when the two were in high school. Her chemistry with Abby is such that numerous users were left wondering why the two didn't run off together. Then there's Abby's best friend, John, a lovably acerbic book publisher (played by Dan Levy) who actually travels to retrieve Abby from the clutches of Harper's family.

What's bad: There were two main criticisms of "Happiest Season." The first being: Can't LGBTQ audiences have a holiday movie where the main plot isn't about mining the anxiety and trauma associated with coming out, being closeted and casual homophobia? Then there's the fact that Harper really is just kind of the worst. After pushing Abby back in the closet, Harper ditches her in a town where she doesn't know anyone to go drink with her ex-boyfriend until two in the morning, then proceeds to call Abby "suffocating" when called on it. It's a pattern of s**ty behavior that is pervasive and present throughout the movie, so her redemption arc doesn't feel super genuine.

Two brothers returning home for the holidays are roped into setting up their family's  Christmas House, a tradition in which they turn their home into a megawatt yuletide wonderland inside and out. Mike (Robert Buckley) is an actor who's hoping his cheesy legal drama "Handsome Justice" gets renewed for another season even as he's reigniting the flames with his childhood crush, while sibling Brandon (Jonathan Bennett) and his husband Jake (Brad Harder) are waiting to hear if they'll finally get approved for an adoption. Parents Bill and Phyllis (Treat Williams, Sharon Lawrence) put up a brave front, but they're hiding a secret from their sons.

What's good: Unlike with "Happiest Season," Brandon and Jake's main narrative isn't tied to their identity of being gay. They're allowed to be loving partners (with kissing!) who just want to add to their family.

What's bad: Their roles are secondary at best, which doesn't really make it an LGBTQ movie. Why aren't they allowed to be the leads? The brothers' stories could've been easily flipped. Hallmark hyped up this movie having three stories, but really it's just like any other movie with the main heteronormative couple and their satellite friends and family whose stories aren't given any real dimension. And while it's great to see Brandon and Jake be affectionate onscreen, the camera unsubtly pans down to show each time they hold hands, as if to say, "Look, they're gay!" Find your chill, Hallmark. — Hanh Nguyen

Hugo (Ben Lewis) is a tightly-wound Manhattan attorney who is vying for a partnership at his firm. He — along with his best friend, Madelyn (Ellen Wong) —momentarily escape the hustle and bustle to spend the holidays with his family in Milwaukee. Before embarking, Hugo warns Ellen that his mother can be a little over-the-top when it comes to Christmas: cut to Fran Drescher (!) having multiple Christmas trees delivered to her home, which is already dripping with decorations.

Who is delivering the tree, you might ask? Well, that would be the distractingly handsome Patrick (Blake Lee), who was once the openly gay, popular boy that the then-closeted Hugo harbored a secret crush on back in high school. The two reconnect and (with a little help from Drescher's character, Kate) begin to fall in love.

But this development raises some big questions, like will Hugo give up his professional dreams to stay with Patrick? Will Patrick be forced to leave his close-knit community to join Hugo in the cold, impersonal Big City? And will the town's historic train station — where the neighborhood holds their annual Christmas party — be saved from becoming a characterless mass-transit kiosk?

What's good: So much, actually, if cheesy Christmas flicks are your thing! The casting of Lewis and Lee — who are married in real life — was a fantastic choice, as was putting Drescher in the role of meddling, over-the-top mother. Like "Happiest Season," Hugo and Patrick's love story is front and center, but the tension in the film comes from more decidedly more benign, if cliche, conflicts. It all feels very holly and jolly.

What's bad: Cliché here is a kind of a double-edged sword. "The Christmas Setup" is derivative of probably 80 straight-to-television holiday movies. You've got the stereotype of the workaholic whose life is radically changed when their proximity to Christmas spirit altered. That said, it makes for a really pleasant viewing experience. But at least none of the issues arise from the central couple.

When compared to each other, "The Christmas Setup" is Salon's pick for just straight-up, saccharine Christmas fun. It hits all the marks that have become standard in the straight-to-television holiday movie genre, from the over-the-top importance placed on community Christmas traditions to the tension between professional accomplishments and personal desires. The romance is believable, and you actually are rooting for the leads to work it out. The cast is great, too, though the performances from the star-studded "Happiest Season" are undeniably stronger.

Through the lens of LGBTQ representation, however, the situation isn't quite as sanguine. Hallmark's "The Christmas House" is the weakest of the three; the inclusion of an LGBTQ storyline is superficial and takes a backseat to the other stories presented in the film. Again, Lifetime's film had the best setup (so to speak) with genuine chemistry (the flirtation! the double entendres!) and affection coming from the main couple without the horrifying issues of the wretched "Happiest Season" narrative.

That said, at least Hulu's film was one of the few rom-coms – ever, not just in this story – that features queer women. Most LGBTQ rom-coms tend to favor gay lead characters, with lesbian characters in a woeful minority. Usually, when lesbian romances are featured onscreen, they are fraught with misery or are set as a period film — look at "Portrait of a Lady on Fire," "Carol," and "Ammonite." The result is often beautiful and poignant, but being in lesbian relationships aren't always tragic and to depict them as such repeatedly feels like a judgment. Where is the joy? The last big lesbian rom-coms (with queer lead characters) are from ages ago — "Imagine Me & You," "Saving Face" and "But I'm a Cheerleader — and it's been far too long.

Additionally, the gay characters depicted in this trio of movies are all white, despite all the networks making huge strides to diversify their talent. It's baffling. It's as if these networks feel they can't present the story of a marginalized group without making them white (even Lifetime's recent "Christmas Ever After," which stars a disabled woman, defaults to white) as a sort of insurance to appeal to the majority. Whereas intersectionality would actually aid in producing richer, more authentic narratives to reflect America.

There's clearly still a long way to go when it comes to better representation, and while Hallmark dipping its toe in is laudable, "Christmas House" should not be held up as a great example. Give that a pass. The other two are worth checking out though, even if it's just to compare them. If one combines the star-power of "Happiest Season" with some of the schmaltz and joyful representation found in "The Christmas Setup," you'd have a pretty perfect holiday film. Maybe the networks can get on that for 2021.