When armed Black Panthers showed up at the California State Capitol in 1967, they probably saved thousands of lives 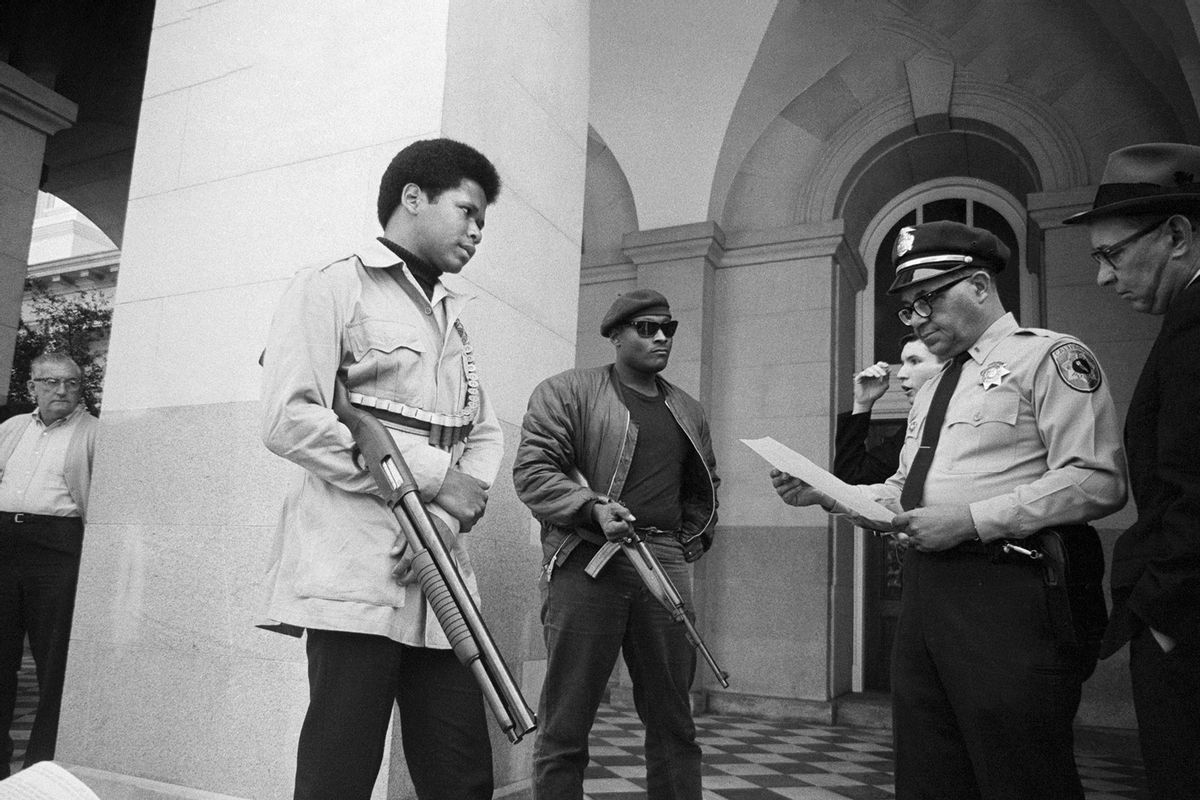 Two members of the Black Panther Party are met on the steps of the State Capitol in Sacramento, May 2, 1967, by Police Lt. (Getty Images/Bettmann / Contributor)
--

On May 2, 1967, the destinies of Huey Newton, Bobby Seale and Ronald Reagan collided. The day saved untold thousands of lives.

At the time, California was an open-carry state with few gun restrictions. Gov. Reagan was on the steps of the State Capitol to meet and share lunch with a group of visiting eighth-graders when Newton, Seale and nearly 30 other Black Panthers pulled up out front in a small caravan of cars.

Armed with everything from pistols to 12-gauge shotguns, they climbed the half-dozen steps to the area around the front doors of the building. Seale pulled out a prepared statement, and read it to the students and people in front of the Capitol:

"Black people have begged, prayed, petitioned, demonstrated, and everything else to get the racist power structure of America to right the wrongs which have historically been perpetuated against Black people. The time has come for Black people to arm themselves against this terror before it is too late."

RELATED: There will be no gun control: For many white Americans, the idea of the gun is all they have left

They then walked into the building to confront the state's police and legislators, fully loaded guns and rifles in their hands.

Reagan was aghast, and the nearly-all-white California legislature panicked.

"There's no reason why on the street today a citizen should be carrying loaded weapons," Reagan said later that afternoon.

Within a few weeks, Republican Assemblyman Don Mulford, with bipartisan support, introduced into the California Assembly a law (AB-1591) to ban people in California from carrying loaded weapons in public.

It was enthusiastically signed into law by Reagan on July 28, fewer than three months after Seale's proclamation at the Capitol.

Over the following years, California built on that initial gun control law. After a 1989 school shooting in Stockton, when a young white man wielding a semiautomatic weapon murdered five children and a teacher while injuring over 30 others, California passed a ban on assault weapons that stands to this day.

The state went on to ban private gun sales, closing the notorious "gun show loophole" that pours weapons into other states.  California requires all gun dealers to be registered and licensed by the state, mandates backgrounds checks and even outlawed the manufacture and sale of cheap "Saturday Night Special" handguns in the state.

When California put its own version of "red flag" laws into place — laws forbidding people flagged at risk for committing gun crimes or mass murders from purchasing guns — the state followed up (it's one of the few in the country with an agency that studies gun violence) and found them to be nearly 100% effective because of how difficult the state makes it to obtain a weapon.

While in Texas a violent criminal on the federal no-fly terrorist watch list is welcome to buy a dozen assault weapons from the back of a car and go shoot up a school, in California you can't buy a gun if you've been convicted of any violent crime whatsoever, even a misdemeanor like a bar fight.

As a result, according to New York Times correspondent Shawn Hubler, by 2019 (the last year for which we have statistics) California's gun deaths were around seven per 100,000 people, one of the lowest rates in the country.

"So there was a huge differential by 2019," Hubler told Sabrina Tavernise on the Times' podcast The Daily. "The chances of dying from gun violence in California were about 70 percent lower than they were in the rest of the country."

California still has more gun deaths than any state except Texas — but that's because it has 40 million people, which is more than 198 of the world's 235 nations.

California still has more gun deaths than any state in the nation except Texas, as the NRA will quickly point out, but what they won't highlight is that California, with 40 million people (about the same as Florida and New York combined), has the largest population of any state in America. It's bigger than 198 of the world's 235 nations.

When your gun-nut brother-in-law starts babbling about gun deaths in Chicago (Illinois, with reasonable gun control laws, is 14.1 gun deaths per 100,000 people), you may want to point out that nearly 60 percent of guns seized in Chicago came from out of state, with most coming from next-door Indiana (17.3 gun deaths per 100,000) where gun stores dot the Indiana side of the state line.

National gun control would put a quick end to that.

It is one of the happy incidents of the federal system that a single courageous State may,if its citizens choose, serve as a laboratory; and try novel social and economic experiments without risk to the rest of the country.

He could have been speaking of California, Hawaii or Connecticut. Gun control works, and we have the proof right here in the United States.

Ironically, while it was Reagan's racism that first produced significant gun control in America's largest state, today white supremacy in America is the single largest force fighting against gun control.

With very few exceptions, the entire Second Amendment movement is made up of white people, many of them associated with white nationalist militias and politicians from former Confederate states.

The NRA is greatly diminished, both in power and budget, but racism continues to drive the gun control debate, this time in the opposite direction from the days Reagan was governor of California.

Today we see a knee-jerk fear of nonwhite people in the ongoing explosion of gun purchases in rural and suburban white communities across the country. When America elected our first Black president in 2008, gun stores across America were so overwhelmed by white people buying guns that it was referred to as a "frenzy" and "the great gun and ammunition shortage."

Scratch the surface of the most fervent "gun rights" members of Congress and you'll find unrepentant white supremacist Republican politicians who reflexively villainize the Black Lives Matter movement and hype the antifa straw man at every opportunity.

On the "gun control" side, now that the Panthers are mostly just a memory on the national stage, fear of armed Black people has been replaced by fear of white children being slaughtered in public schools.

That's providing us with a shocking glimpse into the minds of these Republican legislators: White freak-out about Black people having weapons back in the 1960s was a stronger motivator for them than today's slaughter of innocent children of all races.

At least so far.

Read more on the largely futile fight for gun control: