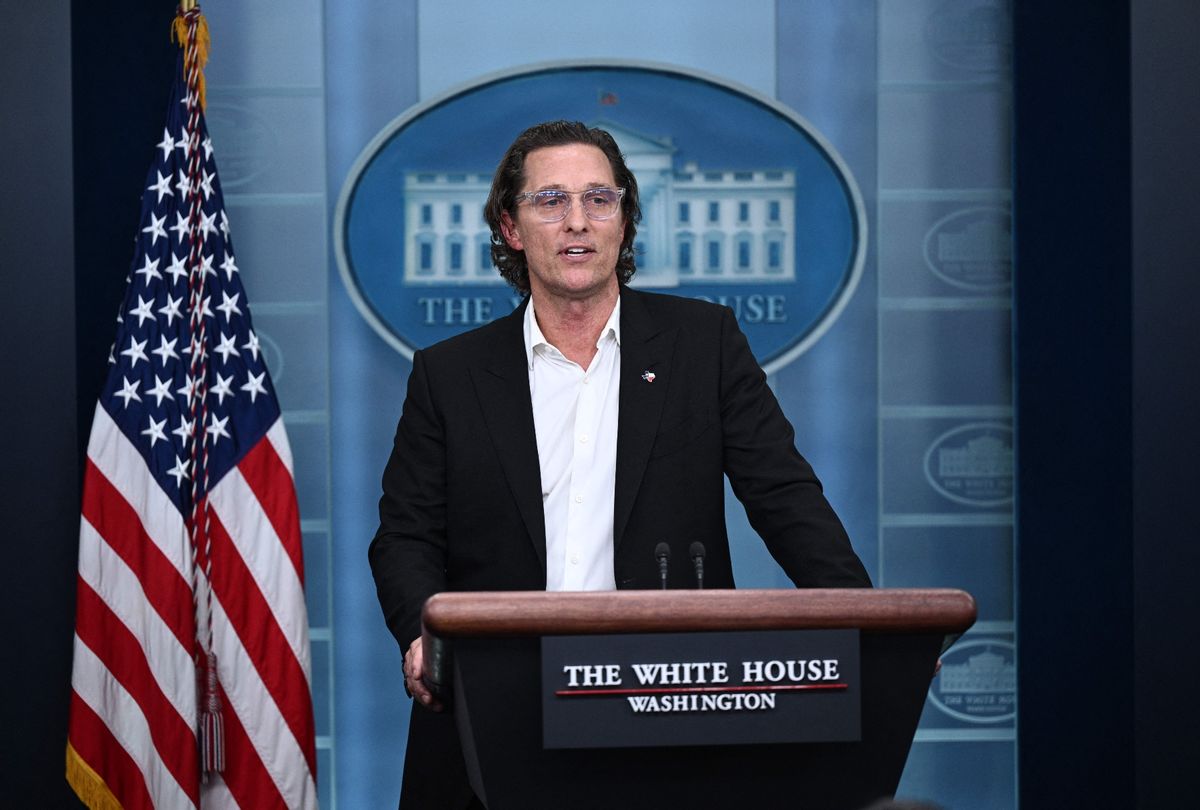 Matthew McConaughey speaks during the daily briefing in the James S Brady Press Briefing Room of the White House in Washington, DC, on June 7, 2022 (BRENDAN SMIALOWSKI/AFP via Getty Images)
--

In the wake of the Texas school shooting that took place in his hometown of Uvalde, Matthew McConaughey posted an online statement that offered prayers but refrained from explicitly mentioning guns or specific reforms. Now, only a few weeks later, the actor is making his stance on gun control clear, both in an impassioned speech delivered at the White House on Tuesday and in an op-ed published the day before.

In his press briefing, McConaughey tearfully pushed for greater investments in mental healthcare and the need for responsible gun ownership. He advocates for much of the same gun reform suggestions that have been ignored so far, such as raising the age limit and Red Flag laws.

"These are reasonable, practical, tactical regulations," McConaughey said. "Responsible gun owners are fed up with the Second Amendment being abused and hijacked by some deranged individuals and these regulations are not a step back. They're a step forward for civil society.

RELATED: There will be no gun control: For many white Americans, the idea of the gun is all they have left

"Is this a cure all? Hell no. But people are hurting, families are hurting," he continued. "This should not be a partisan issue. There is not a Democratic or Republican value in a single one of these shooters. But people in power have failed to act. So we're asking you and I'm asking you will you please ask yourselves? Can both sides rise above? Can both sides see beyond the political problem at hand and admit that we have a life preservation problem?"

McConaughey finished by naming those who were killed at Robb Elementary, becoming emotional in the process. While he did not take any questions, that didn't stop reporters from yelling questions at him, including one reporter who asked if he was "grandstanding."

In his editorial for the Austin American-Statesman, the actor — who is a big supporter of the Second Amendment — elaborates that he does not support gun control, mainly because it hinders the right to keep and bear arms. Instead, he advocates for "gun responsibility," asserting that it allows lawful, righteous citizens to safely own firearms without infringing on their Second Amendment rights.

"I believe that responsible, law-abiding Americans have a Second Amendment right, enshrined by our founders, to bear arms," McConaughey says. "I also believe we have a cultural obligation to take steps toward slowing down the senseless killing of our children. The debate about gun control has delivered nothing but status quo. It's time we talk about gun responsibility.

"There is a difference between control and responsibility," he continues. "The first is a mandate that can infringe on our right; the second is a duty that will preserve it. There is no constitutional barrier to gun responsibility. Keeping firearms out of the hands of dangerous people is not only the responsible thing to do, it is the best way to protect the Second Amendment. We can do both."

Within his call for increased gun responsibility as a countermeasure to gun violence, McConaughey proposes a four-point plan that he believes will promote and uphold gun safety in the long run. His plan includes requiring background checks for all gun purchases, raising the age minimum to 21 years old, authorizing Red Flag laws nationwide and instituting a national waiting period for assault rifles. These measures, he writes, will help "restore responsible gun ownership in our country" and also, prevent "the unnecessary loss of lives."

"I want to be clear. I am not under the illusion that these policies will solve all of our problems, but if responsible solutions can stop some of these tragedies from striking another community without destroying the Second Amendment, they're worth it," McConaughey writes.

McConaughey concludes his piece with another urgent call to action:

"For ourselves, our children, and our fellow Americans—we have a duty to be responsible gun owners. Please do yours and protect the Second Amendment through gun responsibility. It's time for real leaders to step up and do what's right, so we can each and all just keep livin'."