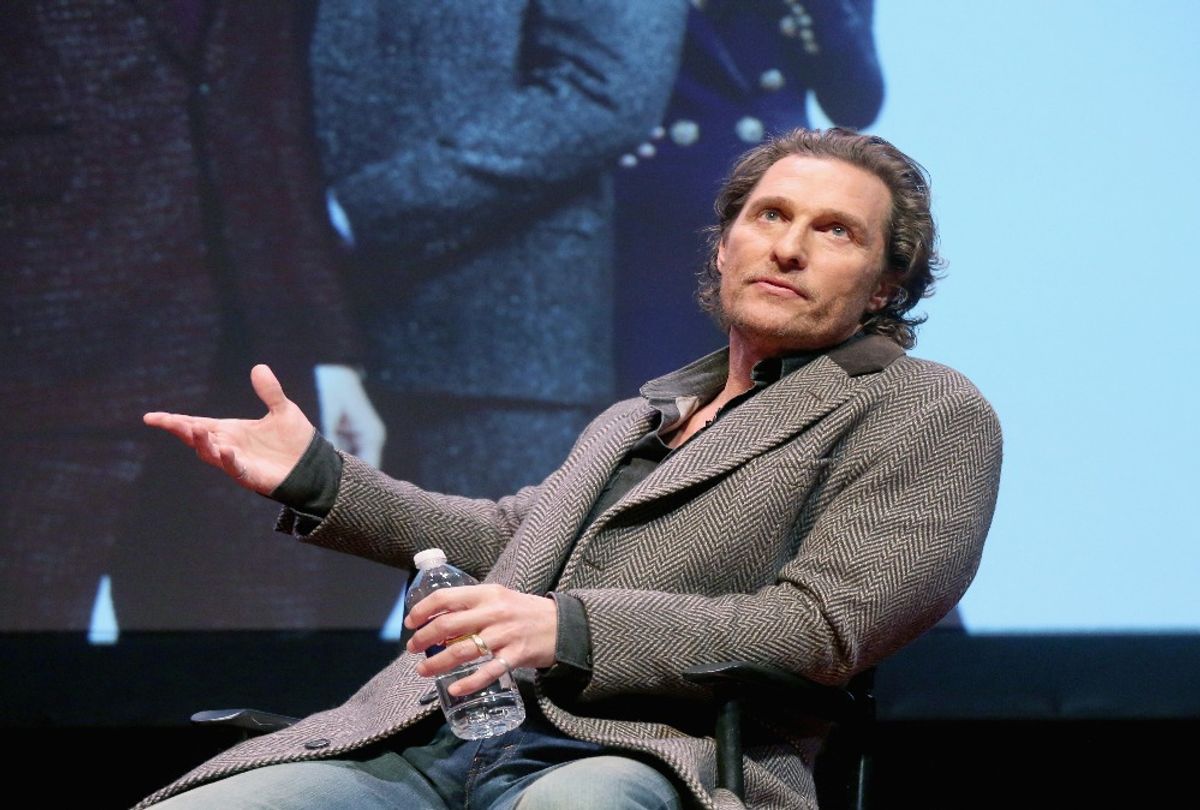 Matthew McConaughey dares Americans to "get aggressively centric." During a recent interview on comedian Russell Brand's "Under the Skin" podcast about his new memoir "Greenlights," the actor likened the country's political parties to two vehicles on opposites sides of the highway that "are so far apart, their f**king tires aren't even on the pavement anymore."

Brand, who was born in the United Kingdom, said that he has noticed increased political divisiveness, especially over the last several years.

"We live in a time, I feel, in my country and yours, where there's this sort of — I have sensed a lot of condemnation and criticism of what I might describe as normal working people," Brand said. "A kind of offhandedness, 'Oh, they're dumb, they're voting for Brexit, they're voting for Trump.'"

Brand said that rhetoric doesn't sit well with him. "I spend enough time with people who have been described in this manner to feel ill at ease with it," he said, before asking McConaughey, "How do you feel about that kind of judgment?"

McConaughey responded that for the country to become more unified, "the left will have to understand the science of 'meet you in the middle.'"

"There are a lot [of people] on that 'illiberal left' that absolutely condescend, patronize, and are arrogant towards that other 50 percent," he said.

He chided some liberal celebrities, without citing specific individuals, for politicizing "get out the vote" messages. "They can't help themselves," McConaughey said. "At the very end of it, they go, 'So we don't let those criminal bastards get back in office.' No! Don't say the last part! You lost 50% of your audience."

He also noted that many liberals couldn't believe that Trump won the election four years ago, and said that many voters on "the right" are now "in denial" about President-elect Joe Biden's victory over Trump "because their side has 'fake news.'"

"No one knows what the hell to believe, right?" he said. "So they're putting down their last bastion of defense."

McConaughey's solution? Voters on both sides of the aisle should focus on shared values, such as basic trust, agreeing not to cheat one another, a sense of fairness and a sense of humor.

"Let's get aggressively centric," he advised. "I dare you."

While McConaughey's political musings would have perhaps only been previously of interest to his fans — or fans of Brand's podcast — they bear slightly more interrogation as the actor has lightly flirted with the idea of entering politics.

While promoting his book on "The Hugh Hewitt Show" in Texas last week, McConaughey left the door open for a gubernatorial run after he was asked if he would be interested.

"It would be up to the people more than it would me," McConaughey said in the interview. "I would say this. Look, politics seems to be a broken business to me right now. And when politics redefines its purpose, I could be a hell of a lot more interested."

McConaughey went on to walk back the remarks on an appearance on "The Late Night Show With Stephen Colbert."

"I have no plans to do that right now," he said. "Right now, no. I don't get politics. Politics seems to be a broken business, politics needs to redefine its purpose . . . Whatever leadership role I can be most useful in, and I don't know if that's politics."

And, as the Dallas Morning News reported, the notoriously apolitical actor has actually only voted twice since 2012 — a level of political participation which perhaps makes it easier to advocate for being "aggressively centric."