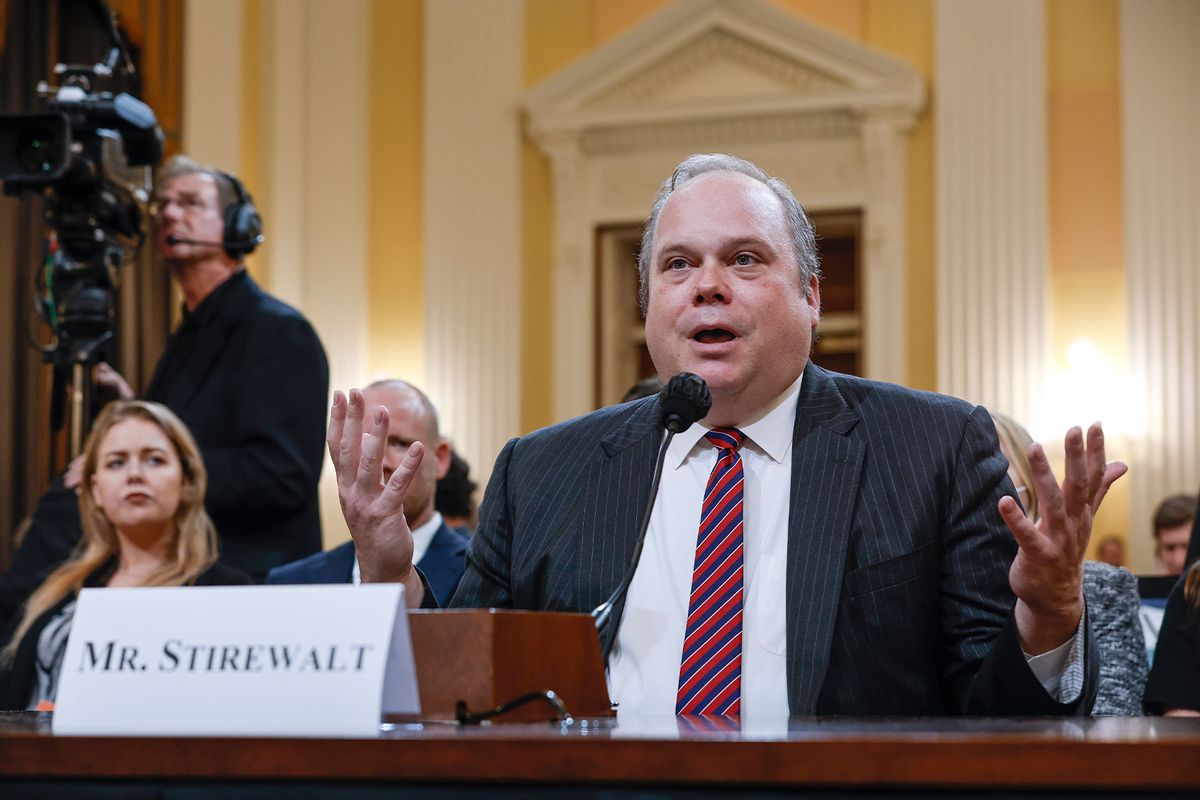 Chris Stirewalt, former Fox political editor, testifies during a hearing by the Select Committee to Investigate the January 6th Attack on the U.S. Capitol in the Cannon House Office Building on June 13, 2022 in Washington, DC. (Chip Somodevilla/Getty Images)
--

Fox News on Monday aired footage of a former Fox News editor suggesting that the network knew President Biden won the 2020 election in several battleground states, even though the channel went on to promote Donald Trump's baseless claims of election fraud for months.

The development centers on Chris Stirewalt, a former Fox News editor who worked on the channel's decision desk during the 2020 presidential election. Stirewalt – who was fired after the network called Arizona, a swing state, in then-candidate Joe Biden's favor – provided testimony this week to the Jan. 6 select committee about the circumstances behind the controversial call.

"Mr. Stirewalt, after the votes were counted, who won the election?" asked the committee's chairman, Rep. Bennie Thompson, D-Miss.

RELATED: "Trump knew exactly what was going on": Inside the thinking of the Jan. 6 committee

At one point, Rep. Zoe Lofgren, D-Calif., another member of the committee, asked Stirewalt what the chances were of Trump having won Arizona after the state had been called for Biden.

"None," the pundit replied, explaining that most recounts are conducted on the basis of hundred-vote margins. "You're better off to play the Power Ball than to have that come in."

Stirewalt's testimony came just hours after he laid into both sides of the aisle in a Monday column for the news conservative site The Dispatch, where he served as a former politics editor. In it, Stirewalt argues that both sides of the aisle failed to expeditiously hold an effective impeachment trial after Donald Trump's coup attempt.

"A single, short article against Trump for trying to disrupt the transfer of power, including by sending an angry mob to the Capitol, would have been very hard to vote against for Republicans who hadn't been part of the power grab," he wrote. "If such an article had been passed by the House that week, I believe Trump would have been convicted and removed from office by the Senate."

"Instead, Pelosi put three cable news stalwarts and sharp-elbowed partisans in charge of drafting the articles: Reps. Jamie Raskin of Maryland, David Cicilline, of Rhode Island, and Ted Lieu, of California," he added. "What the House voted on a week after the attack was not designed to make it easy for Republicans to get to 'yea.'"

RELATED: Elegy for a lost America: Will the Jan. 6 committee really change anything?

Stirewalt also alleged that both the Democrats and Republicans fumbled on their investigation into the insurrection. Republicans, he said, failed to nominate anyone to the January 6 committee who did not promote Trump's baseless claims and election fraud. And Democrats, Stirewalt added, "rather than adopting a somber, non-partisan tone," were "out in advance boasting about how the hearings would hurt Republicans in November's midterm elections and 'blow the roof off the House.'"

Stirewalt's 2020 call wasn't the first time he angered his own Fox News colleagues.

During the 2012 presidential election between Barack Obama and Sen. Mitt Romney, R-Utah, the pundit correctly called Ohio in Obama's favor before all the votes had been tallied. But Karl Rove, then a Fox News analyst, pushed back, saying it was a "very early call." The disagreement led to a significant on-air dustup between Rove, Fox host Bret Baier, and former Fox host Megyn Kelly.