Making sense of a senseless world: How children's books can mitigate the horror around us 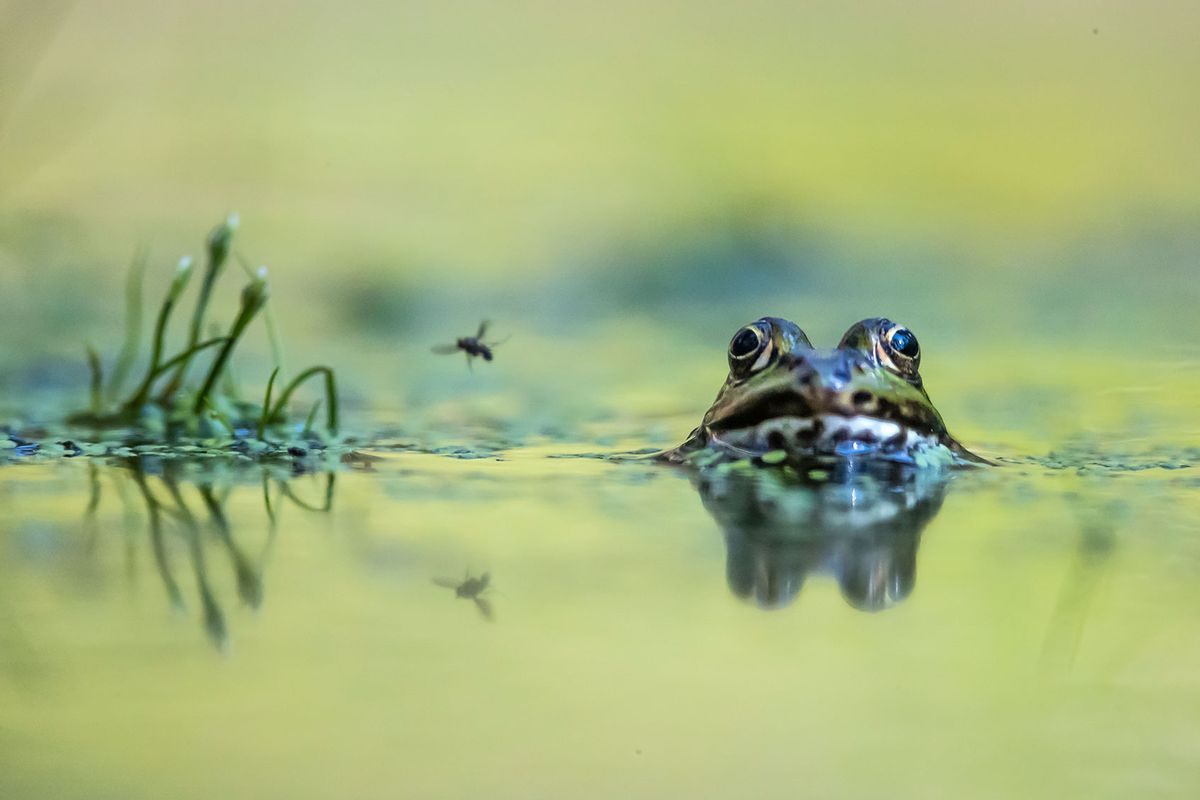 Long before Korean horror movies and shows like "Parasite" and "Squid Game" captivated the world, my mother told me Korean horror stories. Most were fables passed down through generations, like the one about a tiger who prowls villages at night to devour children, and other thinly veiled morality tales. But there was one story my mother recited repeatedly, a story that wasn't as overtly horrific as the others but which chilled me to the bone because I could tell it had been selected specifically to address my foibles.

The story was an allegory about how persistently disobeying one's mother will lead to lifelong heartache. Like me, the doomed protagonist (a rascally young frog) often tested his mother's patience, even making a game of disobeying her. When Mama Frog ordered her son to play nicely on a hillside, he would instead head to the riverbank to make mischief. His gleeful disobedience reminded me of how I routinely provoked my mother, who—to me—seemed rather uptight and in need of some ruffling.

Toward the end of her life, Mama Frog had a bright idea: she would instruct her son to bury her body near the river rather than on a mountainside. But upon his mother's death, Rascal Frog was overcome with grief and finally honored his mother's instructions: he buried her near the river. A storm came and washed his mother's body away, disappearing forever.

RELATED: "Firestarter" taught me the mighty power and powerlessness of childhood

And this is the part that tortured me: Rascal Frog sobbed and sobbed with shame and regret when he realized his error, and that is why, whenever it rains, frogs cry out on riverbanks. (The true reason frogs croak during rainstorms is because the conditions are ideal for mating—but that's not what my mother told me.) No matter how many times my mother recounted this story, it always stunned me into silence and several days of good behavior.

These were probably not the best stories to tell a four-year-old before sleep, but my mother clearly had an agenda. Also, the stories undoubtedly reflected her state of mind. Most horror stories feature characters who are powerless in the face of malevolent forces, and like such characters, my mother probably felt a lack of agency. During that early phase of our American journey, powerlessness defined our lives. Neither of my parents spoke much English, and my mother reluctantly came to the U.S. at my father's urging. My dad was one of many seduced by the "American Dream."

When I was nearly two, we traveled from my family's seaside village in South Korea to a crummy apartment building near downtown L.A., where the possibility of violent crime lurked around every corner. A few years into our residence in that building, my mother was robbed at knifepoint while doing laundry at the machines in the underground carport—a terrible event she disclosed to me only very recently. I still don't know exactly what happened since she refuses to go into detail.

Our building housed many people in transition—low-income families, penniless divorcees, recent immigrants—who moved in and out due to changes in financial, marital, or even immigration status. So while my mother's anxiety bubbled out in whispers at story time, the overwhelming lack of autonomy colored not just our lives, but the lives of the other tenants. People moved away suddenly, often with no warning or any choice in the matter. This sense of powerlessness trickled down to the children. For instance, during games of hide-and-seek in our communal courtyard, some kid would invariably yell out, "La migra!" to ratchet up the tension by positing the chasers as mock immigration enforcement officials. And even though their specific circumstances weren't my own, the expressions of terror on the kids' faces as they ran to hide left a deep impression. Now, in retrospect, this reinforces the notion that horrific circumstances shape the lives of those who lack agency.

When I first drafted my children's story "Rosa's Song" in 2019, the 2020 presidential election was looming, and the nation was polarized about what it meant to be American — some took a narrow, "zero tolerance" viewpoint, resulting in migrant families being separated at the southern border of the country. To be clear, "Rosa's Song" is not a horror story! Instead, the book is about the transformative power of imagination. Specifically, it's a vibrant picture book about an intense friendship between two kids from different backgrounds (Rosa from Peru, and Jae from South Korea) who must part ways due to forces beyond their control. Though the story avoids overt explanations, grown-ups will understand exactly why Rosa's family has to move away.

The story concludes with Jae making a choice: instead of crumbling with despair, he decides to pass along Rosa's kindness (in the form of a love song she taught him) to newcomers in his building, thereby preserving the love and warmth of their short-lived but life-changing friendship. And this is what I love so much about children's books: they can be revelatory, even subversive. While the book is about how exercising kindness and using one's imagination can provide solace in sad times, the story also hints at the harm of uprooting lives. We've seen friendships lost, families separated, dreams disrupted due to xenophobic rhetoric and policies. I've always believed that children's books are not just for kids, but for everyone. And in fact, I can think of a number of public figures who'd greatly benefit from spending time with a good children's book and meditating on its spirit of hope and humanity, so often lost in a world leaning toward hate, violence, and oppression.

Our world is currently a horror story yet again—in just the past few years, we've seen a senseless war in Ukraine, persistent violence against the AAPI community, and more mass shootings, including one very recently that affected me closely. My husband's friend Dr. John Cheng was killed at a church in the sleepy community of Laguna Woods, California, while charging a gunman who'd plotted to slay many on that otherwise peaceful Sunday. John's act of heroism saved the lives of his mother and other churchgoers.

As a children's book author, it's difficult to know what to do while facing the world's despair, which often makes writing and revising stories about imaginary characters seem meaningless. Do words and stories even matter? My editor Maria recently emailed to say, "Sometimes I think the only way to handle hard times like these is through the written word." And deep down, I agree. As a writer, I have to believe in the power of words in order to keep moving forward. Stories of hope and triumph have mattered since the dawn of our species, when humans lived closer to the violence that is a part of nature, as evidenced in stories captured on the walls of caves. Stories are a form of self-defense, a refusal to allow despair to take hold. If stories didn't have such power, crusades to censor books wouldn't exist at all, and people wouldn't reach for books again and again, especially during tough times.

Even my mother, who had a penchant for relaying dark parables to her willful daughter, knew that I needed a message of hope to cling to. She would conclude each story time with takeaways such as, "I know you're much smarter than this frog" or "You'll make better choices." She'd also grasped a truth about horror stories: the best ones show how a helpless character finally exercises agency, taking action and making choices that impact the plot. I think of John, who refused to be powerless, who exercised valiant agency to stop real-life horror.

The great writer and activist James Baldwin left this call to action for writers and other artists: "You are responsible to those people to lighten their darkness." In a world where horror invades even places where horror has absolutely no business — churches, schools, grocery stores — this is what we have to do over and over again: continue to seek beauty, search for hope, look to the heroic examples of John, the people of Ukraine, those around you who refuse to be powerless. To mitigate the persistent problem of evil and suffering, even small things can help one endure and overcome. And this has always been the case for me: in times of uncertainty, there's nothing quite like opening a beloved book, an old friend who provides solace and helps make sense of a senseless world.

Helena Ku Rhee is an author based in Los Angeles. "Rosa’s Song" (Random House Studio, illustrated by Pascal Campion) is her most recent children’s book.