How to write about murder for teens, as an adult: Consider Piggy in "Lord of the Flies"

"Lord of the Flies" was the first book to make a major impression on me. And I knew who the Piggy in my school was 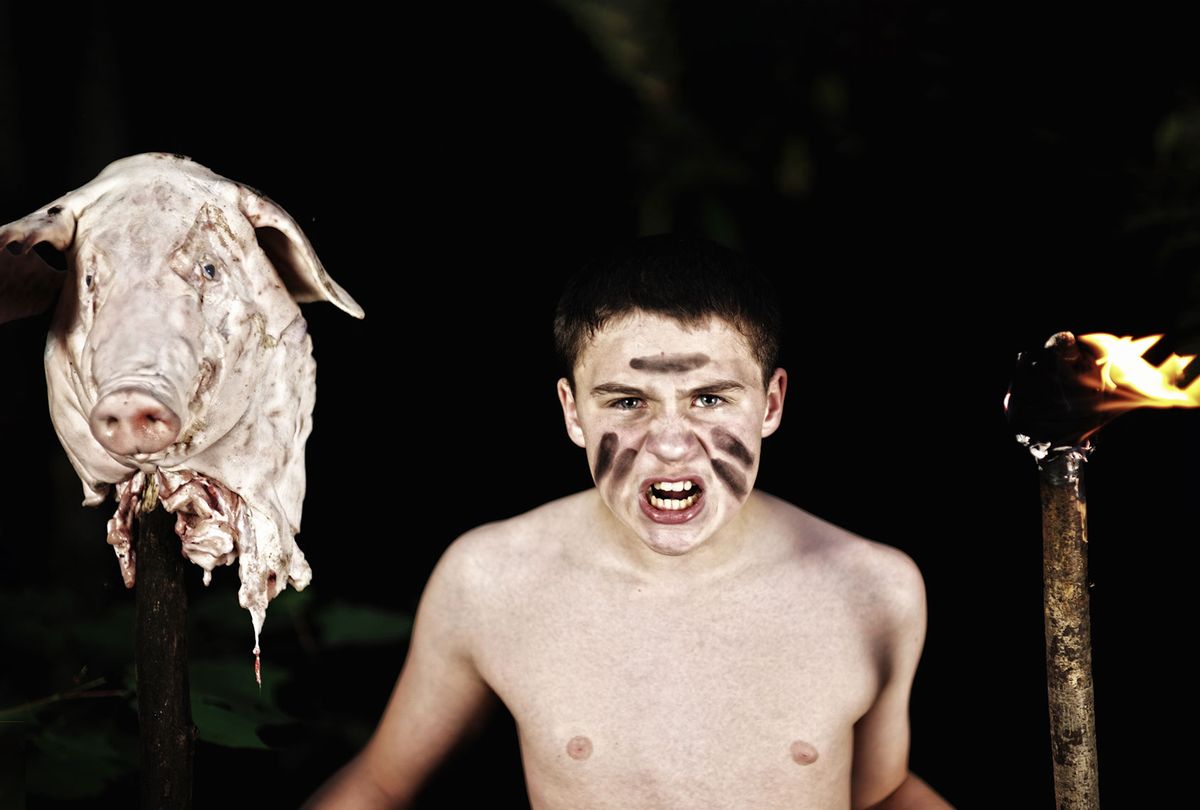 The first book to hit me like a bolt of lightning was William Golding's "Lord of the Flies," which was assigned in my Grade 10 English class. I hated and was obsessed with this book. I hated the spiked pig head on the cover. I loathed the very idea of being trapped on an island with my fellow private school students. (Yes, like the boys in this book, I also went to a private school — in my case, an all-girls school in Canada.)

I saw right away which character I was in the book. It wasn't Ralph, the protagonist. It definitely was not Jack: upstart, rebel, hunter and bully. No. I was clearly Piggy: chubby, unpopular, prophetic, possibly too real and unreasonably opinionated. When I realized that Piggy was going to die (see: foreshadowing) I was both freaked out and not at all surprised.

Near the end of reading the book, my English teacher did an "experiment" where one day she didn't show up for class, to see what we would do. To see what could happen in the hour we were without supervision. Pretty obvious, but also weird. Haha, everyone joked, I guess this is our Lord of the Flies. Haha, look out.

The first piece I ever wrote that anyone thought was actually good writing (for a 16-year-old) was a response to this experiment, and to "Lord of the Flies" as a whole. It was essentially a pretty self-righteous open letter to my fellow classmates, which read, in part: You jerks? Are the beasts.

Now, let's say this. Was I in any real danger of having someone in that class throw a rock at me? In the hour my teacher left us alone or any of the hours I was at school, supervised and not? No. Let's say I am and was very lucky that that was true.

But anyone who has lived it knows there is a danger in being on the outside in high school, to being illegible, visibly weird, helplessly unable to fit in. Maybe it's not getting-killed-with-rocks danger, but it can definitely seem that way. It feels horrible. It feels unsafe. It is like you're always walking in the cold, on thin ice.

As a student, I was obsessed with "Lord of the Flies" because it was the first time I saw that part of my experience, my fear, laid out in a book. It made me feel less crazy, seeing it in print. Like, yes, this is real. Yes, kids (not all kids but at least some) are mean. I also hated "Lord of the Flies" specifically because it left me nothing but an uninterested grown-up at the end of the book, who comes to take Ralph home to safety. And yeah, I was also mad because Piggy dies.

Even if I saw it coming, I was mad.

Needless to say, I thought about Piggy a lot while I was writing my latest YA novel, "Cold."

"Cold" is a murder mystery set in a frigid East coast winter. It is about two teenagers, Todd and Georgia, who do not know each other, but who have spent very similar early school years being pushed out and pushed around. Both of these characters are queer, and both have been labelled the Piggy of their school. For Todd, this experience ends, tragically, with his murder.

RELATED: The power of pop literature: Why we need diverse YA books more than ever

YA writers, I think more than people who write for adults, are often asked about what it means to write for teenagers; what lessons they hope or think they are imparting to teens with their stories. I am never clear on what messages or lessons readers get from my books. What warnings I'm imbuing. (I did stop including smoking in my books a few years ago because I thought it made smoking a default trying-to-be-cool thing, and I wasn't super comfortable with that – even though I smoked for most of my teen years. Gross.) Most of the time I try to focus less on lessons and more on staying as true to the experiences and feelings that I remember having as a teenager. Reflecting rather than instructing, maybe? I try to be honest.

On that note, to be honest, if there's any teen I'm writing for, it's probably teen me. Which is why so many of my protagonists are queer, why many are Asian. I'm writing what I know and I'm also writing the things I wanted to see when I was reading books as a teenager, and didn't. And that is definitely true of "Cold."

More than anything, I wanted "Cold" to be honest to that dangerous feeling of being outside. But I also wanted it to be more than that.

While "Cold" is a murder mystery, it's not just a story about death. It's about survival.

I wanted "Cold" to be a story with a tragic ending and a resilient one. One of the characters, Todd, doesn't see any hope for his situation. He isolates himself and pulls away from the people trying to help him. He embraces the role of the cold outsider. The other character, Georgia, refuses to take on the stories people tell about her. She refuses to be the Piggy even when people call her (essentially) pig-like. She suspects the story people tell about Todd because it sounds familiar.

For the kids who do feel that danger of standing on the outside, for the kids who suspect they are the Piggy, I hope this book feels hopeful, because it is. And I am.

More stories about YA books: