Trump and his stooges must be punished: It's the only way to save America

If one man is above the law, then America is done. The Jan. 6 committee is literally fighting for our future 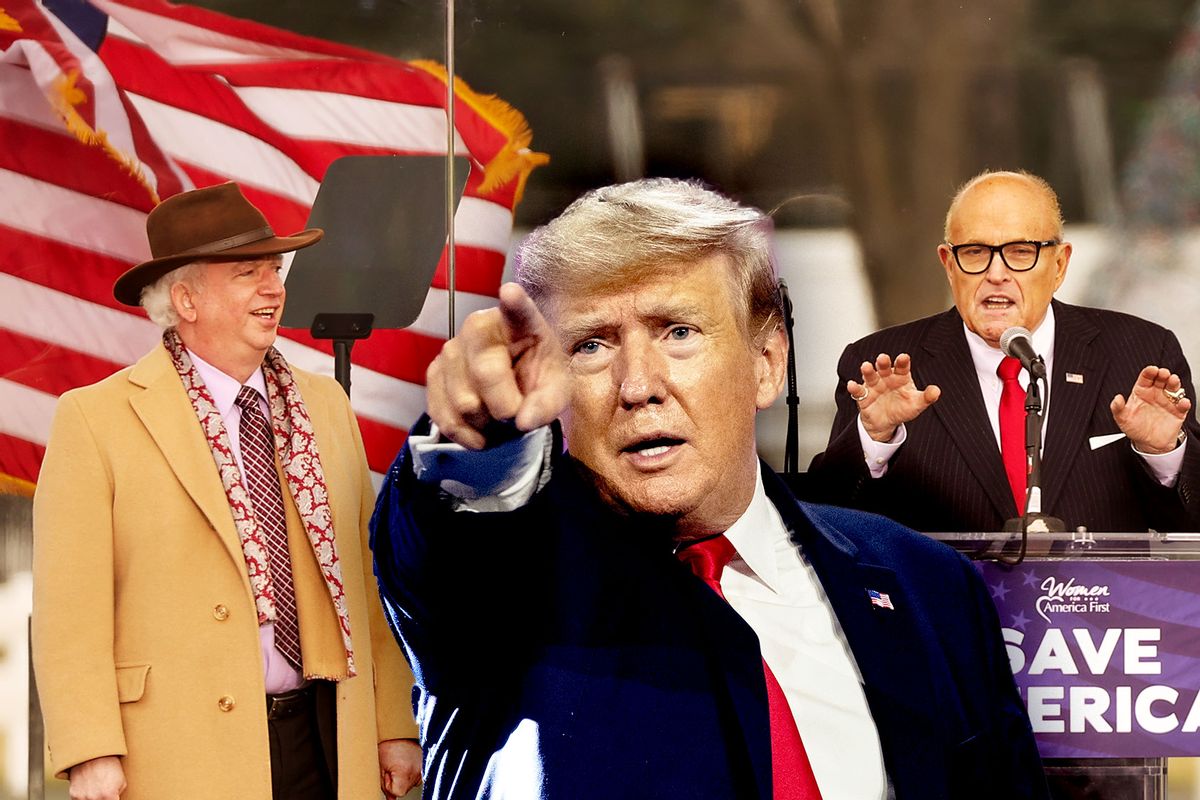 And so it came to pass that in the Year of Our Lord 2022, logic and facts left the room and the Republican Party replaced them with "We've got lots of theories, we just don't have the evidence."

This is the postmodern world, devoid of reason and chock-full of stooges like Donald Trump, John Eastman and Rudy Giuliani. It is the world we were warned about by Michael Cohen in a 2020 Rolling Stone article: "I believe that he would even go so far as to start a war in order to prevent himself from being removed from office. My biggest fear is that there will not be a peaceful transition of power in 2020."

It is a world where Trump's allies in the Supreme Court have eroded the separation of church and state so thoroughly that in the near future we could be living in a fascist Christian state. Jack-booted thugs will roam free and anyone who does not present as a God-fearing white Christian heterosexual will have more to fear from the government thugs stomping your neck than from the vengeful God to whom the dimwitted believers pray.

The only thing standing in the way of this dystopian, dyspeptic destruction is the Jan. 6 hearings, and this week we found out in cinematic detail how members of that committee are trying to stave off the end of democracy.

In the latest installment of this real-world drama, as in pretty much every other episode, a preponderance of the witnesses have been Republicans. It's as if the few Republicans left with the capability of reason are engaged in an epic struggle to vomit up the Donald Trump poison that has infected the party's other members. The Democrats, most of whom have never imbibed  the Trump brand of poison, have realized how close we are to the edge and thus are trying to assist their colleagues across the aisle. (For those who need a historical reference, this is called putting your country before your party — a founding principle of our nation.)

How serious is this move to protect our country? Christian members of the Republican Party have also come forward, confessing their sins and imploring their friends not to follow the false prophecies of Donald Trump. These are some of the very same Christians who supported most of Trump's policies, of course — and were often denigrated for it in more liberal social circles.

Yet even some of those who supported Trump on nearly every occasion have drawn the line at what he did on Jan. 6, 2021.

What did those who have testified before the committee hope to gain by their appearance? Merely to belong to a group of citizens of the United States who labored to ensure that our democratic process worked as intended, and to ensure the peaceful transfer of power from one presidential administration to the next. (For those who need a historical reference, that simple act has made us the envy of all other nations for more than 200 years. Yeah: You want to give that up? Seriously? Get real.)

Among those who stepped up was Arizona House Speaker Russell Bowers, a Republican, who told the committee: "I do not want to win by cheating."

Bowers, a lifelong conservative, lost many friends and colleagues simply because he told Donald Trump he wouldn't break the law for him. Trump tried the soft approach, he tried reasoning and then, in typical Trump fashion, when he couldn't get his way he threatened Bowers, who still refused. In the end, the Trump loyalists began to eat their own, threatening Bowers, accusing him of being a pedophile and trying to destroy his life — all because he wouldn't compromise his personal beliefs. (For those in need of a historical perspective, the ability to live peacefully without such reprisal is often cited as a fundamental factor in the founding of this country.)

Wandrea "Shaye" Moss didn't do any better. She was an election worker in Georgia, where Trump was behind in the count and looking for votes to steal.

Moss and her mother, "Lady Ruby" Freeman, were threatened by Trump loyalists and accused of voter fraud after Moss was seen in a video passing her mother a ginger mint. Conspiracy theorists, including Rudy Giuliani, later claimed it was a thumb drive containing fraudulent voting data. "The president of the United States is supposed to represent all people, not target one," Freeman testified.

"Nowhere do I feel safe," Moss told us. Along with everyone else she used to work with in Fulton County, Moss left her job to escape the constant threats from Trumpers. That is a horrible testament to the violence and anger Trumpers demonstrate toward their chosen enemies, and it portends horrible problems in the November midterm elections should those jobs be filled by Trump acolytes who will do anything to win.

Trump targeted Shaye Moss. He targeted Rusty Bowers. He targeted Michael Cohen. He will target Rudy Giuliani and he will target John Eastman. Trump will throw absolutely any other human being under the bus, no matter who they are, if they don't bow to his whim.

As the Jan. 6 committee readied for another hearing, Trump was trying to sell swag. The grift continues, no matter what.

As the Jan. 6 committee readies for another episode on Thursday — to be followed by a break of several weeks while members consider "a deluge of new evidence" — Donald Trump was busy sending out fundraising emails, as usual. He reminded his supporters to buy his golf balls, photographs and other swag before coming out to meet him at one of his golf courses, on a trip supposedly paid for by Trump himself. That's definitely a lie: The Donald never pays for anything.

An important question was asked during Tuesday's hearing: Who among us is safe?

The answer is obvious — no one. Legal scholars who know more than I do believe that Trump must face prosecution. If he does, and if he is convicted, I believe he should be forced to live under the same conditions Michael Cohen did when he was held in isolation. Let Trump contemplate his contributions to this planet, our shared future and his children in an 8x10 cell. Further, let that cell be an unventilated hot box, complete with a broken window, sink and toilet. Let there be a biblical plague of flies — then he'll know what Cohen went through. Oh yeah, give him a radio — one that only receives NPR.

But if one man is above the law, then we're done.

Some of Trump's supporters venerate him the way our distant ancestors venerated emperors and pharaohs. How far have we fallen if that's even an option?

Trump wants to be just such a man. He encouraged Mike Pence to join him by suggesting "how cool" it would be to have the power the Constitution absolutely never gave him. In so doing, Trump exposed himself as a potential Antichrist, according to evangelical readings of scripture. But don't worry: Hardly any conservative Christians will see the light, until they perish in Trump's flame.

It is the most fervent Trump supporters who present the greatest threat to our mutual survival. While he aspires to be a king, some of his supporters venerate him the way our distant ancestors venerated a Caesar, or an Egyptian pharaoh. Trump loves those guys!

How far have we come, really, if that kind of thing is even an option? We have been warned any number of timess. Anyone who's ever spent any time around Trump and escaped with their lives semi-intact has warned us. Two impeachments warned us. Numerous scandals warned us.

On Sept. 23, 2020, Trump made history by refusing to commit to a peaceful transfer of power after the election.

So to be fair, he warned us. We heard it from his own lips! Still, many of us did nothing, or even aided and abetted those who would destroy the United States.

Did we listen? It will be interesting to see if anyone listens this time.

We've had ample warning. The facts are not in dispute.

According to statements made before the select committee, there is a case to be made for the charge of conspiracy to defraud the United States, not just against Donald Trump, but also against John Eastman and Rudy Giuliani. Let the Three Stooges face the music.

I do not want Trump to go free. I want him to pay for his crimes, but I also don't want him to get the attention his demented psyche craves. At the end of the day, Donald Trump doesn't care whether you love him or hate him — only that you pay attention.

The man is more addicted to attention than any human being I've ever known. Having had the displeasure of covering his presidency in its entirety, I can honestly say I've never met a more loathsome, cancerous pustule of a human being, a man so narcissistic that for him the rest of the universe exists solely to pander to his needs. He's a senior-citizen man-child who has rarely heard the word "no," takes pleasure in the suffering of others and causes that suffering, whenever possible, with a sickening and nearly orgasmic delight. He has no redeeming social value whatsoever. He is incapable of any empathy, any fellowship or any love.

In the end the best way to deal with Donald Trump would be to relegate him to obscurity — and to mark him forever as a failure in everything he's ever done.